Something is wrong. As ominous as an abattoir conveyor belt, the successive monologues in Slaughterhouse inch us closer to an inevitable end. Here, that end seems mostly about finding out what’s happened at a corporate rooftop party, which has turned out a bit more violent than usual: we see bandages on ears and hands; disturbing details and motives are revealed gradually; questions are raised. Who was at the party? They were fellating what? Do we have a right to spill blood? If so, how much are we responsible for?
The show consists of five characters delivering monologues about the incident. They each come from a different part of the company: there’s the tech code-bro, the second-in-command, the newbie, to name a few. Some believe in what the company, an ethical eating startup, is doing. Others point out those people are totally wrong. Others don’t care. And so on. 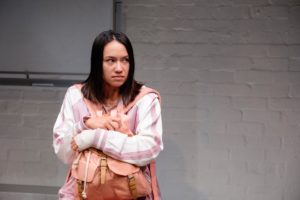 Slaughterhouse is an exploration into the brand of ethical eating delivered in an extremely stylish way. The unreliable perspectives shine a light on the disconnect between selling something, and being genuine, with all the overlap and grades in between. In the play, the company shies away when confronted with the gruesome realities of factory farming — it’s about “mindfulness”, not action, one character says suggests. I came away mulling on how the concept of ethical eating, which may seem a morally good endeavour, can often be invoked by particular kinds of people for particular ends which may not be so good.
There are two standout performances. Brooke Rayner shines as Bianca, the lowly office minion, jittery and anxious, but extremely passionate. Every fragmented line is delivered like an attack. On the other end of the corporate scale, Romy Bartz commands the stage as CEO Hannah, who is captivatingly human but also completely ridiculous. Here, King’s writing is at its best – expressive and sharp, with dollops of the absurd. 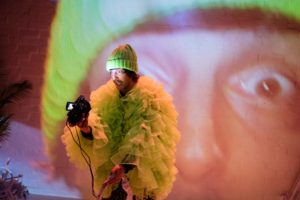 Also of special note are the production values. The white stage is bordered by off-white office paraphernalia, and distinguishing monochrome costumes are complemented by simple but effective lighting. Most prominent, however, is the use of video. Slaugherhouse joins another Belvoir 25A show, Skyduck, in showing us the comedic potential of video projections. In its silliest and funniest section, stoner DJ (Tom Matthews) recounts his experiences of the party, with the camera-work and projection screen effects providing a dizzyingly internal look into into his super high psyche.
Slaugherhouse is a fun and worthy viewing experience that touches on a broad range of ethical-eating related topics. Some throwaway lines hint at explorations of how ethical eating movements intersect with ethnocultural experiences, and though unexplored will remain intriguing footnotes. Despite this, there are still lines and images in the play that pop up in my mind at the dinner table, a testament to the punchy writing, dispatched so slickly and cleanly.
Eric Qian
– Eric loves watching theatre, especially by/about queer people and people of colour.

Disclosure: The Plus Ones were invited guests of FeedRange Co.
Image credit: Claire Hawley

Gin Palooza Is Back (Hallelujah Amen) – The Plus Ones Sydney