Fangirls makes me want to scream my head off and tell everyone to go watch Fangirls. It’s an absolute spectacle filled with always loveable and sometimes frustrating characters, with a pounding urgency that makes its two and a half running time fly on by. With this much heart and sheer entertainment value, you’d be hard pressed not to feel like a fan by the end of it.

The short of it: Edna is in love with Harry. Harry doesn’t even know she exists. One of the reasons is that Harry is a globally renowned pop star with hair to die for, and Edna’s a schoolgirl yet to turn 15. Hair: mostly average*. Love will win out, though. Edna’s sure of it. 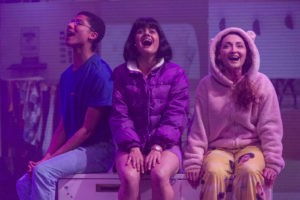 Yve Blake, who also wrote the show, plays Edna with a relentless adorkable spirit. It’s impossible not to root for her, even as she huffs at her well-meaning mother or makes some questionable and not-terribly-legal decisions. Surrounding her are school friends and occasional frenemies Brianna (Kimberley Hodgson) and Jules (Chika Ikogwe), who warmly portray “best friend” characters with complex inner lives and stories of their own.

On that note, the cast is just tremendous. Sharon Millerchip plays Edna’s understanding mum, but also a bunch of various teens executing rambunctious choreography (for a moment I truly believed she was 15. What an actor). Aydan (and his hair) are appropriately swoon-worthy, with a comical British accent that sometimes goes a bit wobbly. Ayesha Madon plays a variety of intense fans and a comedic ribbon twirler, while James Majoos plays a young American gay teen, all limbs and clipped memespeak, with a wonderfully sensitive portrayal of a supportive internet friend and fellow fan. Every member of the cast is up to the delivering each hilarious line in the script and brilliantly bounces off each other’s personalities. 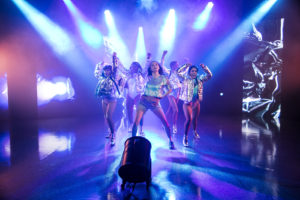 The show is bursting with things to say, and says them with humour and vigour: it alternates between smaller-scale scenes about Edna’s personal struggles, and large-scale rousing song/dance numbers that tap into the collective energy of the fandom. Early on, Fangirls links the reverence of teenage girls to something biblical, but later cuts deeper when pointing out the innate sexism between diminishing the fandom of young women in relation to the (often sports-related) fandom of young men. There are also beautiful, heart-wrenching parallels drawn between fans and their parents, and it’s ultimately a lovely switch-up where these fangirls are real deal stars in the audience’s eyes.

Fangirls slickly ties up the personal with a bigger, group identity, and shows us that to be a passionate, all-in fangirl is something brave and powerful. Early in the show, Edna is devastated she’s missed out on a ticket to the hottest show in town. On one level, her reaction can seem over the top, but as Fangirls shows, there are experiences so joyful they can’t be missed.

*Sorry Yve Blake, this was just for comedic effect, your hair is stunning.

Fangirls runs until 10 November at the Belvoir Theatre (25 Belvoir St, Surry Hills).
The venue is accessible.

Disclosure: The Plus Ones were guests of Belvoir.
Photo credit: Brett Boardman

Afternoon Tea On Kent With Wedgwood – The Plus Ones Sydney