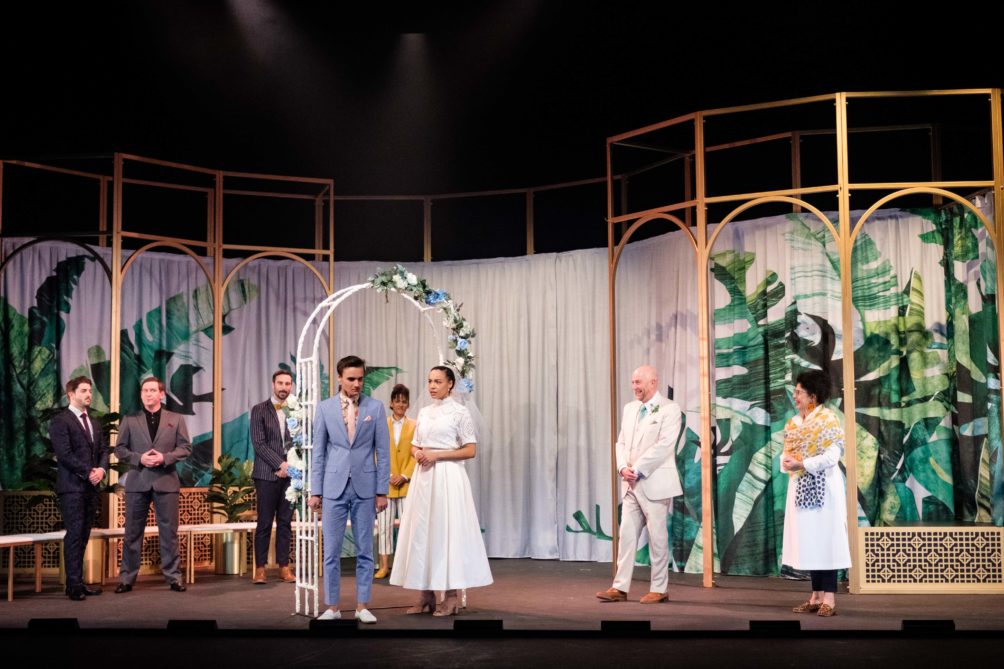 We were curious as to why Bell Shakespeare Director James Evans chose to open his new production of the comedy Much Ado About Nothing with the climax scene – a blissful double wedding with “all’s well that ends well”. Not until the conclusion of the play did the intent become clear.

Much Ado About Nothing, considered by some to be Shakespeare’s funniest play, is a sassy, razor-sharp battle of wits between the bickering Beatrice and Benedick who have both vowed to never give their heart to anyone. The pair use words as weapons and hurl insults at each other until they realise, with a little help from their friends, that they are attracted to each other and indeed in love.

The first half of the performance lacked lustre and depth. At times, the lead female characters Beatrice and Hero seemed to be forced. Zidzi Okenyo’s characterisation of the shrew’s behaviour was realistic but her voice failed to deliver the famous quips with sufficient gravitas. Duncan Ragg’s portrayal of Benedick was so clownish that it was difficult to take Beatrice’s scathing criticisms of his arrogance seriously. On a positive note, Danny Ball delivered a princely-commanding Don Pedro, while David Whitney was flawless as the fatherly Leonato.

After the interval, things lifted dramatically, with some serious acting and emotive drama.  The malevolent Don John played by Paul Reichstein displayed his tortured disposition. Will McDonald made Claudio his own, with his performance being the highlight of the evening.  He was outstanding in his display of emotion and passion on being informed of Hero’s apparent disloyalty on the night before they were wed.  Vivienne Awasoga’s saucy and a bit steamy interpretation of the demure Hero was a much updated reading of the pure maid – but more was to come.

As The Bard no doubt intended, the show was stolen by the insanely random officer Dogberry, played humorously by Mandy Bishop.  The mumbling, bumbling voice she employed, however, made it difficult to fully appreciate the string of non-sequiturs which poured from this strange character and his offsider, Verges, played by Marissa Bennett.

As a general comment, were we not familiar with the play, it would have been difficult to follow the storyline and action.  Modern costuming does not clearly define soldiers from civilians, nobility from servants, clergy, police, judge, musician, etc.  Women playing the role of men adds to the confusion, with Suzanne Pereira for example redefining Antonio and Sexton as “sister” rather than brother and friar.  And while recognising the practical necessity of actors in a small company to play more than one character, Will having to act as both the deceived Claudio and the villainous Borachio in the “confession” scene was incomprehensible.  Having said that, the opening-night audience thoroughly enjoyed the performance, with no bewildered school children scouring their Cliff’s Notes to work out who’s who.

It would not be a Bell production without a modern political message somewhere to make it even more relevant than Shakespeare already is.  The moral was delivered in the final scene.  In the second portrayal of the double wedding, rather than lovingly declare her maiden virtue, as the dead white male had written it, Hero feistily slaps her new husband Claudio across the face for making . . . much ado about nothing.

Much Ado About Nothing is showing at the Playhouse, Sydney Opera House, until 24 November.

How to Be Thorough in Your Dental Hygiene Routine

Gin Palooza Is Back (Hallelujah Amen) – The Plus Ones Sydney