Allow us to introduce you to the best-looking (and of course, best-tasting) bottles of wine you ever did see: Young & Co’s new range of red wines. We have ‘The Jam’ Shiraz, ‘Cherry Bomb’ Pinot Noir, and ‘Berry Riot’ Grenache – while a rosé, along with white varietals, will follow later in 2019.

The three reds are sourced from some of the world’s leading wine regions, from McLaren Vale in South Australia to the south of France.

Promising a flavour sensation in every glass, the bold and disruptive Young & Co labels were designed to embrace the hero taste characteristics of the varietal and assist those new to wine to find a flavour that appeals. And let’s face it: when picking up a bottle of wine for a party, many of us go for the prettiest label. After all, if we’re not a certified Master of Wine, how would we really know the ins and outs of every single bottle of pinot? With Young & Co’s line of gorgeous bottles, there’s no need to divorce flavour from style.

I took the three bottles to a house party and hosted a blind tasting. Here are the result of a dozen Sydneysiders’ expert opinions — along with the official tasting notes, which I read to everyone later. All they knew was the type and location of the grapes. 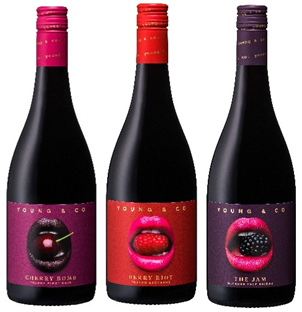 The Jam is a rich Shiraz with a glorious attitude evoking an abundance of fruit flavours. This wine offers a lush palate of blackberry and dark plum, accompanied by a playful hint of sweet oak and spice. Jewel-like in colour, it throws tones of deep ruby red. The aroma is an enticing blend of ripe blackberry fruit, mocha and spice.

The group found this wine to be spy, and dry (but in a good way). There were elements of sultana and grape flavours.

Cherry Bomb is a flamboyant Pinot Noir that oozes French flair. From the south of France, Cherry Bomb is a wonderfully stylish fusion of colour and flavour, vibrant red in hue and flaunting flavours of raspberry and dark cherry with a perfectly rounded mouthfeel that welcomingly lingers well after the flavour explosion.

One Sydneysider instantly knew this was a classic example of a pinot without being told. Partygoers thought it was drier and had more tannins than the McLaren Vale Shiraz.

Berry Riot is a Grenache bursting with style and sass, as one would expect from the French. Abundant with the aroma and flavour of red berry fruit, this wine offers seamless and elegant structure. Wonderfully balanced and with a lovely length to finish. Be prepared for unbridled flavour with the
Berry Riot.

This one had a full-bodied mouthfeel, according to the party attendees. They found it not too dry, with a taste that was light and fruity, with notes of cherries and raspberries.

So, which of the three wines did the partygoers enjoy? Trick question: all of them! There’s just something about Young & Co’s attention to detail in everything from the places they source to the bottle design.

The best part about Young & Co’s range of reds: the price has dropped! Originally $25RRP, it’s now only $23 RRP. That’s the best news for my wallet, since I’ll be buying all three wines for many moons to come. Once you try the wines, you will, too.

– Theresa
Co-founder of The Plus Ones, Theresa loves the Young & Co. wines with the fiery passion of a thousand suns.

Young & Co is available in BWS nationally and retails for $23 (RRP).

Check out our autumn magazine for the season's best events, festivals, parties, launches, and more.
drinks Main
BWS Sydney The Plus Ones The Plus Ones Sydney wine Young & Co Young and Co

3 Ways to Increase Your Online Sales