Ever wanted to travel on a budget? A friend and I had the delight of trying the first-of-its-kind exercise concept that allows you to (seemingly) cycle the globe in a single session at Scenic Cycle, near Sydney’s Martin Place.

This is  a new Australian exercise concept that lets you cycle some of the most beautiful bike tracks in the world via a stationary bike, using advanced high-definition technology. Parked right up front before a big screen, we were led through untamed lands along the fierce West Coast of Tasmania, to the snow lined hill climbs through the French Alps and back to the beautiful sunset in the famous streets of San Francisco. My favourite course was dodging the yellow-cab traffic in New York, to the backing track remix of “Closer” by The Chainsmokers.

The scenery used in the class was remarkably filmed first hand by the studio’s owner who travelled the world over 4 years, using his own filming gear to capture footage of picturesque rides throughout Europe, Asia, and North America, as well as Australia, New Zealand and Samoa. To get the raw footage, he attached his camera to everything from a bicycle to a motor scooter and a quad bike — I guess so that we wouldn’t have to. 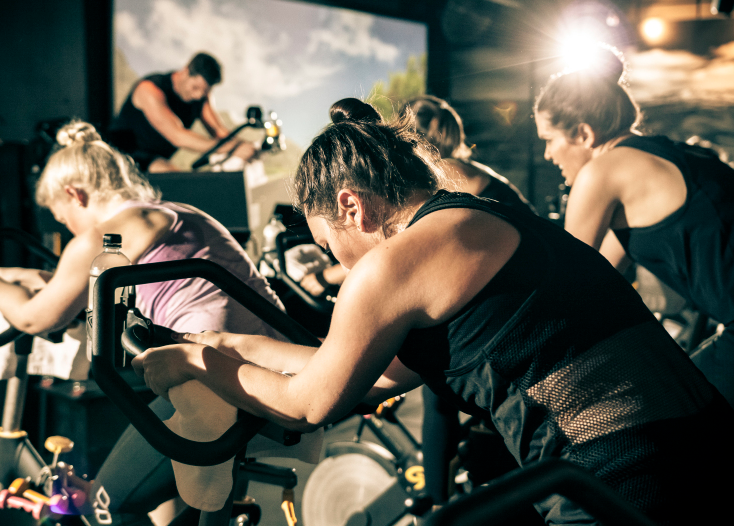 Scenic’s motto is that it’s 50% about the mind, 50% about the body — and that’s the unique point about this kind of exercise. Being transported to other tracks around the world inspired me to push myself more than I normally would. By the end of the class, I’d clocked over 600 calories, and felt like I’d just climbed and conquered a mountain.

Scenic Cycle is as much about the mental release as the physical burn. Our particular class featured a Live DJ set for the studio’s launch. The leader’s energetic voice pushed us on, and the footage served to let us all lose ourselves in the moment.

Cyclists can track power wattage, average RPM and energy expended in real time on the schmick state-of-the-art Schwinn bikes. The spin sessions are 45 minutes, where riders can go into a room and enjoy a bit of a mental holiday. Pack your bags, and go!

– Jill
Jill is a Sydney-based journalist who loves to exercise when it’s disguised as fun. Follow her on Instagram.

Scenic Cycle is open in Sydney CBD and Manly. For more information, visit their website.

Disclosure: The Plus Ones were invited guests of Launch Group