Neon Aether by Gabrielle Nankivell, is flashy and cinematic. Each of the eight dancers wears a coloured costume. Semi-structured like an astronaut’s suit, they deftly set the scene for the futuristic adventure to come. The piece travels through different vignettes, the eight bodies orbiting fluidly, then suddenly mechanical, then fluid again. Each vignette ends in absolute darkness, with a noisy radio-like interstitial, evoking a distant and desperate conversation between those in space and those left on earth. Ultimately, the dancers become united, and together they keep the dark at bay. The final lighting note is of a lingering illumination. It’s an image filled with hope. 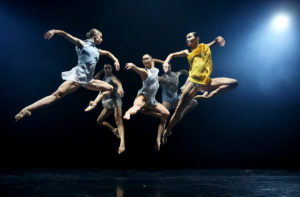 The second piece, Cinco, is choreographed by Rafael Bonachela. It’s starkly different. For one, the piece starts off intensely and never lets up – a contrast to the naturally building energy of the first piece. Five dancers rapidly extend their limbs, attacking the air while discordant strings screech in the background. The lighting design here is quite novel: five spotlights swivel onto five dancers. Overall, I found it easier to enjoy when considering the comparison of the first piece – every aspect of the production, movement and tone is totally inverted. The piece seems to exist in a completely different dimension to Neon Aether but is just as compelling.

WOOF by Melanie Lane rounds out the triptych. The piece is structured more similarly to the first, though the tone is markedly different. The dancers wear rag-like outfits, and their hands are covered in dark mechanical grease-like paint, sending Mad Max, arid apocalypse vibes. Their movement is more feral and deranged, suggesting a dissolution of civilisation. In contrast with the previous two pieces, there are more bodies on stage, so the experience is understandably heightened. Smaller groups of dancers slice the diagonals of the stage, and chaos transforms into order and back in seamless, breathless phases. It’s a rousing final end to a wonderful show.

Eric Qian watches too many shows. If you know of any upcoming shows please let him know at @erc_______.

Disclosure: The Plus Ones were invited guests of Sydney Dance Company.