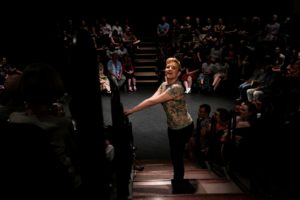 For me, one of the most exciting moments when seeing a show is when the lights go down and the audience hushes. So it throws me off when, in Every Brilliant Thing, neither happens. Instead, amongst a visible backdrop of audience members (the seating wraps around), Kate Mulvany is there beaming up at us, ready to invite us into her story. We can see her but she can also see us, a fact she uses wholly to her advantage — the lights stay on, and the audience will be more involved than ever — which turns out to be one of the most entertaining parts of the experience.

Throughout the show, the narrator talks through particular moments in her life, starting with her mother’s attempted suicide. The topic is not light, but she has a way of adding levity. She assigns audience members surrogate roles like a vet, or her father, or a piano (my favourite) and constructs the scene from there. There are a multitude of joyful, comic moments wrung out of this concept, and while just the thought of audience participation might send you into cold sweats, it’s an absolute delight for the rest of the audience. As such, every emotional beat with an audience member, however dark or disconsolate, is tinged with humour and warmth. 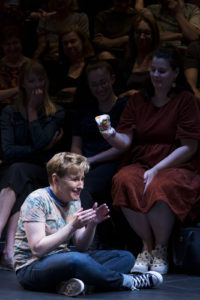 It’s a beautiful feeling to feel so connected to an audience, but of course, none of this would work without a charming and warm persona to bring us together. Kate Mulvany is a beacon and an anchor, expertly using us to show us a woman navigating important events through various stages of her life, from being an inquisitive seven year old to decades later, and slowly building a narrative surrounding her relationships.

The show’s liveliness is intermittently tempered by frank monologues about suicide and depression. It’s an interesting effect — the quick alternation between light and dark — that sometimes catches you off guard emotionally, and other times is too fleet to fully notice. With such a unique, well realised element of audience participation, I was waiting for the text to have enough emotional counterpoint to bring everything back together, and to divert a potentially cloying positivity to explore heavier themes.

The piece definitely does do this to some extent, displaying decent shading and touches of complexity, and asking us questions about what could happen when we transform the usually underlooked with special attention, and of loneliness and joy. And unlike more conventional theatre, participating in the show almost feels like an answer.

Eric Qian is a student writer who just won’t stop.

Disclosure: The Plus Ones were invited guests of KabukuPR