If you live in Sydney, home of the world’s most famous opera house, and have never been to the opera, now is the time to book and go. Showing at Sydney Opera House this summer is the perfect production to begin what could be a lifelong love affair with opera – Puccini’s Turandot.

Turandot is listed by many aficionados and opera appreciators, including yours truly, as their favourite of all operas. It was the final opera written by the great Italian composer, Giacomo Puccini, in 1925, and wasn’t quite finished when he died. He never saw it performed. Puccini’s other operas include La Boheme, Tosca and Madama Butterfly.

Turandot boasts what is probably the most famous aria ever written, “Nessun Dorma”, which has become cultural shorthand for opera as an entire genre, a signifier of refined taste, as well as something of a pop culture fixture. If you consider yourself operatically ignorant and are thinking you don’t know the song, I assure you, you do. Pavarotti sang it at the World Cup in Italy in 1990. Aretha Franklin put her own spin on it at the Grammy Awards at Radio City Music Hall in 1998. The last decade has seen no end to the viral performances on YouTube and reality show music competitions. Hell, in 2016 Donald Trump used a recording of it at a presidential campaign rally. Trust me, you know “Nessun Dorma”.

But perhaps you don’t know the story behind the iconic tune. That’s the best part. Turandot has an absolutely gripping plot. It is an ancient fairy tale about 1000 years old, part of an Arabian body of work called the “Thousand and One Days”, counterpart to the “Thousand and One Nights”. The story has inspired no less than twelve operas, although Puccini’s is the one that has stood the test of time and remains to our day.

Turandot, a Chinese princess, daughter of the Emperor of the Sun, is impossibly beautiful but also impossibly cruel, slaying those who love her. Seeking revenge on all men for the tragedy that occurred to a female ancestor, she swears she will never be owned. Any royal suitor wishing to marry Princess Turandot must first answer three riddles. If he fails, he dies. A Prince comes forward, bewitched by her beauty and determined to conquer her. He is warned that Turandot’s has been a bloody reign, that many young men before him have been executed. His old, blind father and loyal slave girl plead with him, but to no avail. The prince faces the trial. Each of the three questions the Princess poses he answers correctly. 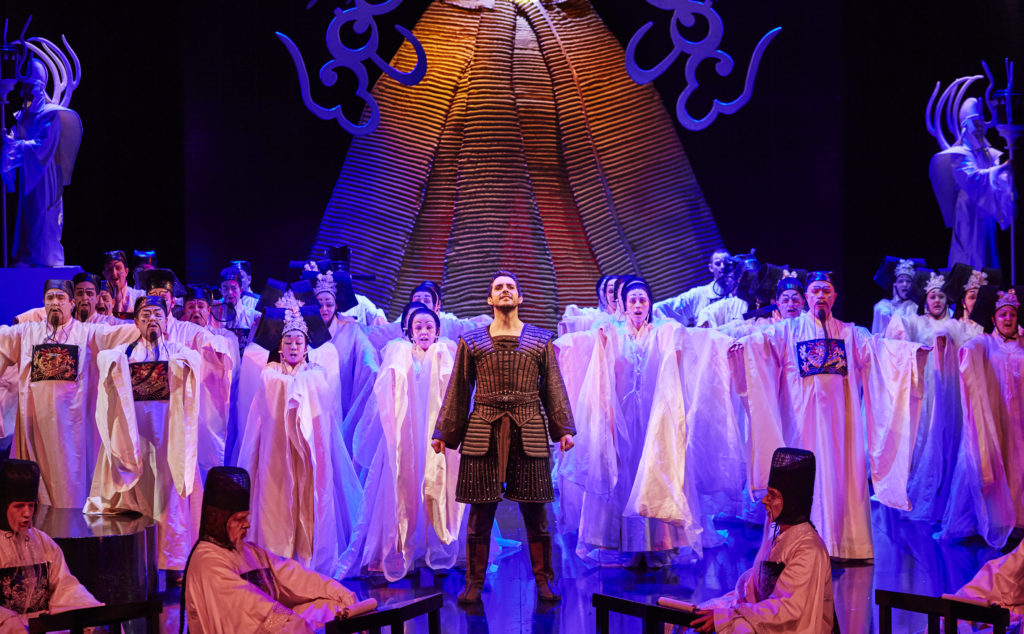 When he triumphantly goes to claim his prize bride, on seeing her distress he offers her a challenge of his own: if she can learn his name by dawn, he will forfeit his life; if she can’t, she has to marry him. Turandot orders everyone in the kingdom, on pain of death, to stay awake all night to help her discover the stranger’s identity. Hence, Nessun Dorma, which means “no one sleeps”. Despite threats and torture and more blood, Turandot fails to discover the secret name. As dawn approaches, but before the first light, the prince pulls Turandot in close and boldly kisses her. Feeling the heat of his passion melt her icy heart, she cries her first tears. Now sure of his victory, the prince reveals his name, Calaf, giving Turandot the power to have him executed, if she still wishes. 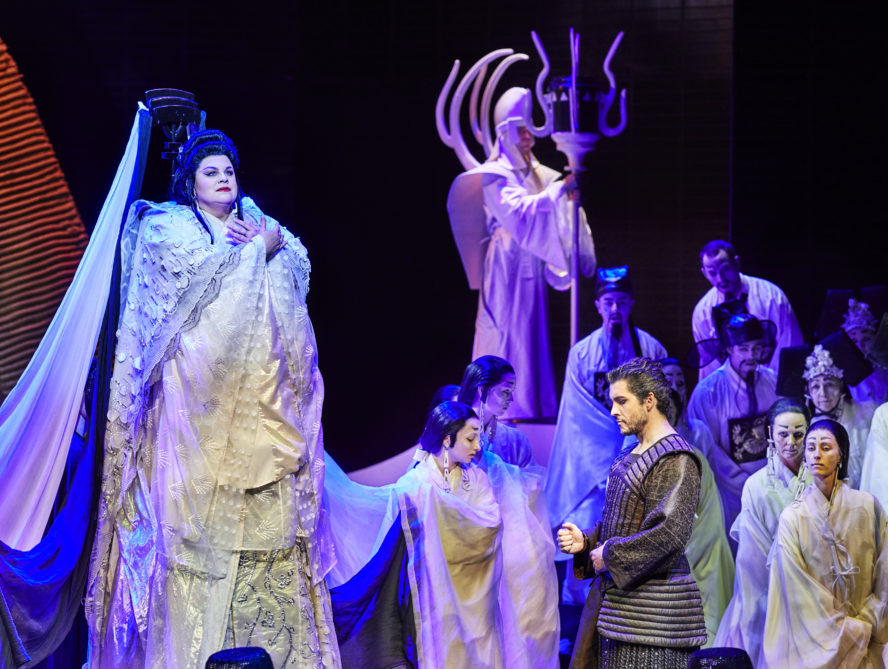 This production, created by acclaimed Australian director and choreographer Graeme Murphy, is theatrical and visually arresting. The costumes, props and set design are all oversized, creating striking shapes and patterns and evoking the sense of the daunting, majestic Peking dynasty. It is the exotic oriental world of fable and fantasy, strikingly beautiful, mysterious and untouchable. Throughout most of the opera there is a large chorus onstage, creating a mass of human movement and a huge, impactful sound. The orchestra is also exceptionally large, including 13 tuned Chinese gongs – a full chromatic scale – not including the large on-stage gong which gets struck as part of the action.

Spanish born tenor Andeka Gorrotxategi plays Prince Calaf with all the self-assured swagger required, smug smile and nose in the air to boot. The quality of his singing, like that of the entire cast, is solid and superb from beginning to end. Calaf is a particularly difficult role to sing. It seems that every time he opens his mouth, every instrument in the orchestra is playing and he has to fight to be heard. Add to that the pressure of performing such a hit as Nessun Dorma, of which everyone is a critic, in the third act, after already performing for a couple of hours, and being compared to recorded versions of the likes of Pavarotti or others who get to belt out that short little number into a microphone in a studio.

Someone who doesn’t have to fight to be heard is American soprano Amber Wagner, who gives a blinding performance as Turandot. The power of her lungs is like nothing I have every encountered. It is not just her sheer decibels that impress, but the clarity and voluptuousnous of her tone. She also gives a believable dramatic performance, showing evident mounting nervousness and agitation as Calaf answeres each of the three riddles correctly.

Bravo! Altogether a mesmerising night out at the opera, especially if you’ve never been before.

Turandot is showing at Sydney Opera House until 30 March.

In the Heights – Sydney’s Hottest Musical