Having read multiple scathing reviews of Bell Shakespeare’s new production of Julius Caesar after its national tour, I had the bar set low for Sydney’s opening night. I was, however, pleasantly surprised to not only enjoy the show, but also have occasion to marvel at several excellent moments, appreciate some applaudable directorial choices and witness the rise of what I envision to be the new stars of Bell.

It is refreshing to see a cast that equitably reflects our community, as well as to hear true ochre accents on the Australian stage. Director James Evans has deliberately and successfully brought together in his cast of just ten, Australians of Asian, Indian-Nepalese, Aboriginal and Torres Strait Islander descent, as well as a black American in the title role. 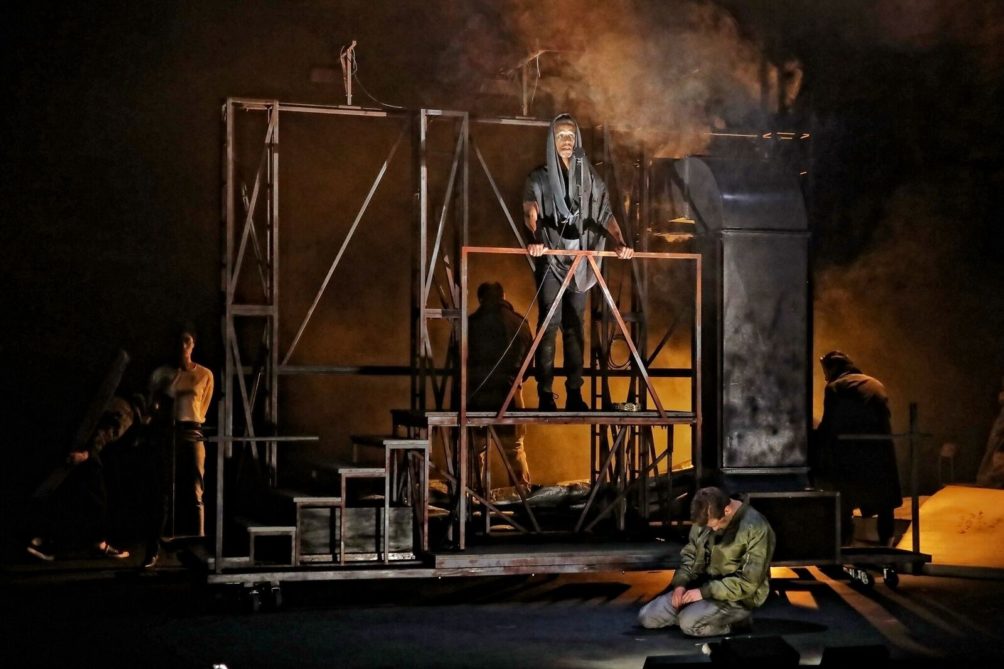 Let it be noted that of these ten, seven are making their Bell Shakespeare debut with this production. There is certainly a distinct scent of green in the air. Many of these actors have a lot of growing and maturing to do. For some more than others, their presence, the power of their voice, and their individual style still beg significant cultivating. Ghenoa Gela, for example, who was a serviceable Casca as well as Messala, had a habit of emphatically gesturing along with her lines, almost like sign language, as if giving a visual commentary for those struggling to understand the meaning of the words. This may have been directed or may have been her own style, but it became a tad tiresome. Having said that, there is evident potential here amongst this cast of fresh talent.

Nick Simpson-Deeks as Cassius was the stand-out for me. From his first words to his last, I was unable to get Kenneth Branagh out of my head. Everything about him – from the timbre and inflection of his voice, to the rhythm of his verse, to the confidence of his stance, to the appearance of his very face – reminded me of the great Shakespearean legend of our age. He was a treat to watch and listen to, definitely the star of the first half. I have no doubt of this being the first of many productions to come of Nick Simpson-Deeks with Bell Shakespeare.

James Lugton, who we have seen before in Richard 3 and Othello, does not disappoint in the role of Brutus, a man whose name is almost as synonymous with ‘traitor’ as Judas. Lugton did not train for the role, did not act in the rehearsals, nor any of the previous performances in the national tour, but stepped into the role only days prior as a substitute for a sick colleague. After a solid first half, in which he was rather outshone by the charisma of Simpson-Deeks, he really stepped up in the second half and impressed, showing us a little more of the nuance to the “honourable man” so oft praised, ironically or no.

Sara Zwangobani must be singled out for recognition for her emotional performance of Mark Antony. The shock, grief and remorse she demonstrated kneeling over the body of her beloved Caesar were believable and indeed moving, and her famous speech stirringly delivered. 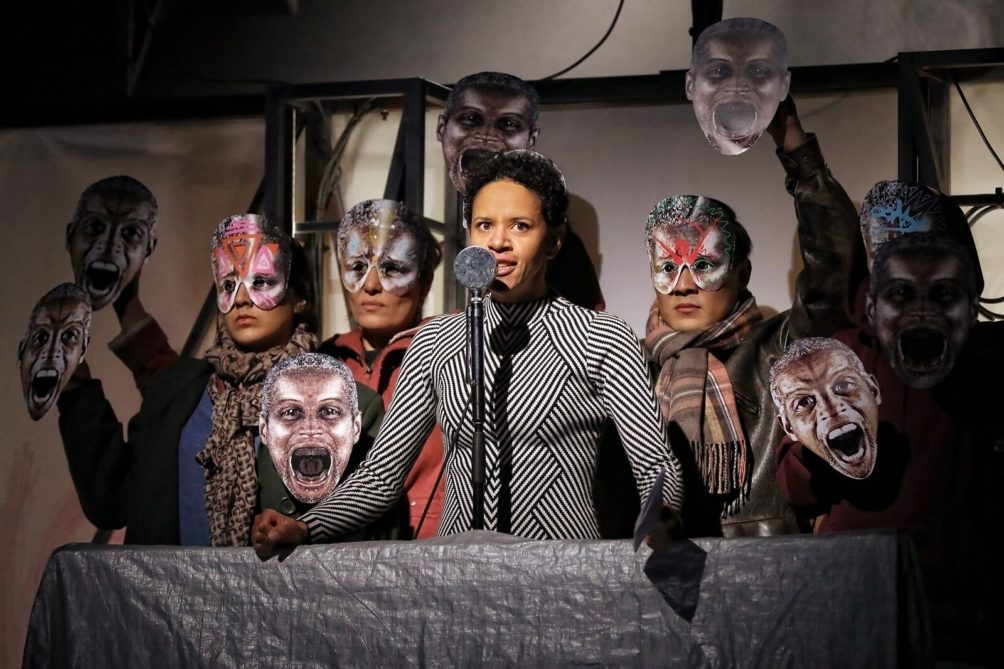 It was, however, an odd, unexplained directorial choice to cast Mark Antony as a woman. Gender swapping in theatre is the trend at the moment and often works exceptionally well, as in the case of Kate Mulvany as Richard 3. This time, though, I failed to see any point being made by the swap and was distracted more than anything every time the characters spoke of the Roman war general, such a well-known historical figure, as “her” or “she”. It was also incongruous with the fact that the last production of Bell Shakespeare, Antony and Cleopatra, to which Julius Caesar is the prequel, had maintained Mark Antony as a man.

Another oddity of this production was the climactic murder scene. Every theatre director faces the decision whether to make the murder bloody or not. There is not really right or wrong in this, so long as it makes sense and is well done. In this case, director James Evans chose to go with no blood. The thing is, the way Shakespeare wrote the scene practically demands blood. Each conspirator needs to have bloodied hands in order to shake Mark Antony’s clean hand, thus including him in the blood covenant. Evans’ choice to have no blood bags on Caesar’s body when he was stabbed, resulting in a clean corpse, clean set and clean hands all around, then had to be resolved somehow when it came to the obligatory bloody handshake. He did this by bringing in a bucket, having the conspirators dip their hands in and then lift them up dripping and stained red. How the blood got from Caesar’s body into the bucket is unexplained.

It was also quite obvious that after the bucket moment, the actors were all very conscious of where they placed their bloodied hands, almost as if trying not to mess up the set, the props, or their costumes, so that all could be used again tomorrow night. This was particularly evident when Mark Antony knelt over Caesar’s body, weeping and vowing. The curious and conspicuous fact that Zwangobani never once touched the body or the banner that covered it with her bloodstained hand, drew something away from her otherwise convincing dramatic performance. There was simply no abandon. It matched the hospital-grade immaculate set as being a little too clinical.

All in all, an enjoyable performance worth seeing. A good introduction to some new names to watch out for, and a leap in the right direction in terms of conscientiously equitable casting. As every staging of Shakespeare should do, it raises more questions that it answers, encouraging us to examine our own society and our own leaders, and to create our own meaning.

Julius Caesar is showing at Sydney Opera House until 25 November.

Alicia was an invited guest of Bell Shakespeare

Patrón Day of the Dead Popup across Sydney