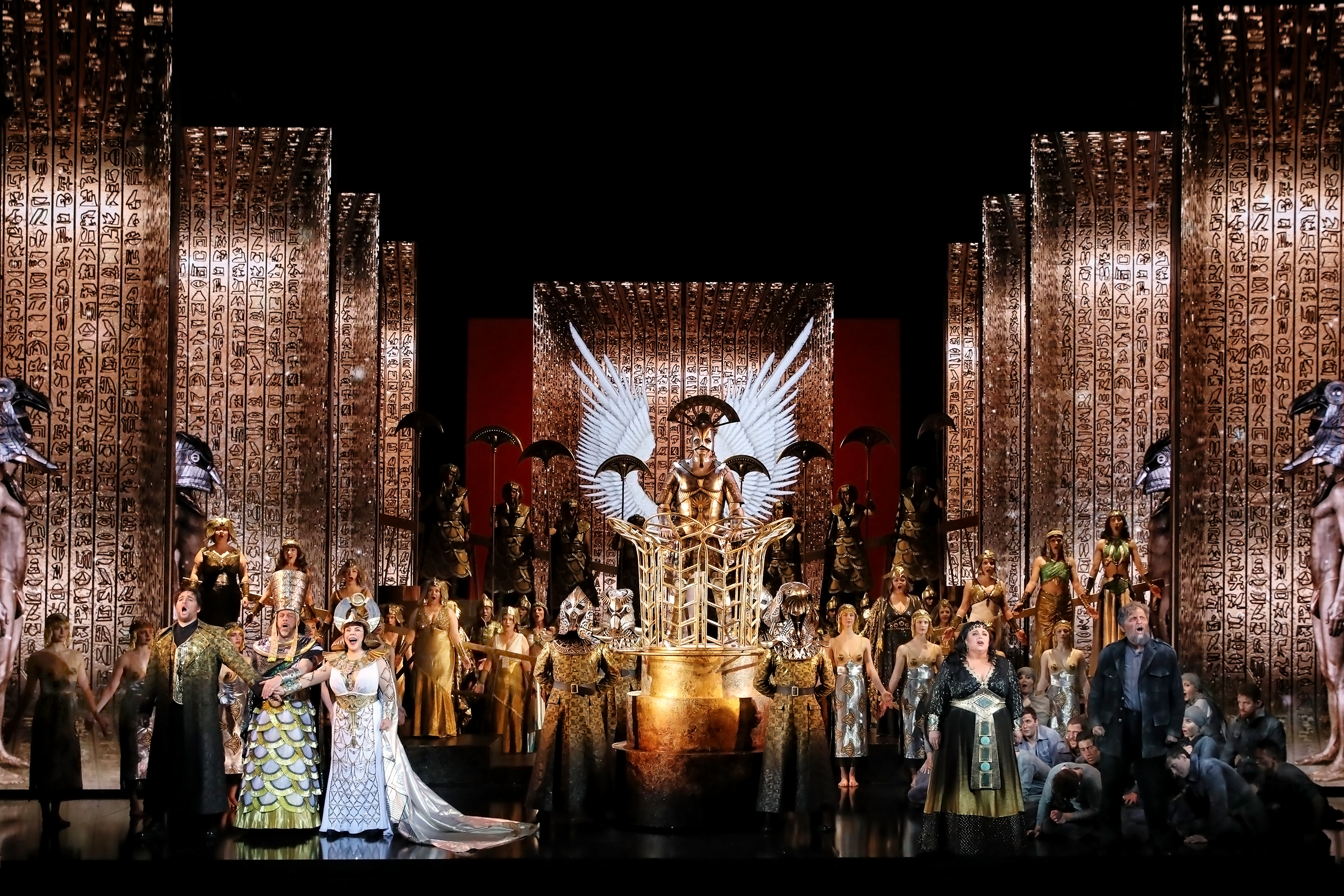 Opera Australia’s artistic director Lyndon Terracini debuted the company’s first digital work on Wednesday night, 18 July. A grand scale is expected in Verdi’s Egyptian epic, Aida, and hence it is the perfect vehicle for showcasing the immeasurable possibilities of the fusion of live performance and video. Although Opera Australia is by no means the first opera company in the world to use projections, there has been a huge investment in the technology on display at Sydney Opera House at the moment and it is well worth the price of the ticket to go and check it out.

This is a brand new production by Italian director Davide Livermore, who clearly is working with the motto, “more is more”. His Aida is visually and audibly colossal. The lavish sets, designed by Giò Forma, and sumptuous costumes, by Gianluca Falaschi, particularly the animal-deity headdresses, have the over-the-top flair of a Mardi Gras float or a Katy Perry concert, without looking gaudy. Everything is excessive in size, and yet intricate and beautiful.

Central to the set are ten soaring, cinema-sized HD LED screens onto which are projected video visuals which transport us to Egypt in the time of the Pharaohs. The superb videos, created by D-Wok, which include both time-lapse and slow-motion, are almost still, like works of modern art, and hence do not detract from the on-stage action. In fact, far from detracting, they add a breathtaking atmospheric element. From giant writhing serpents to statuesque, semi-nude warriors, both gilded in gold, to contemporary images of billowing, ominous storm clouds, licking flames and a monstrous black panther, everything is amped up to deliver a knock-out punch of an impact. 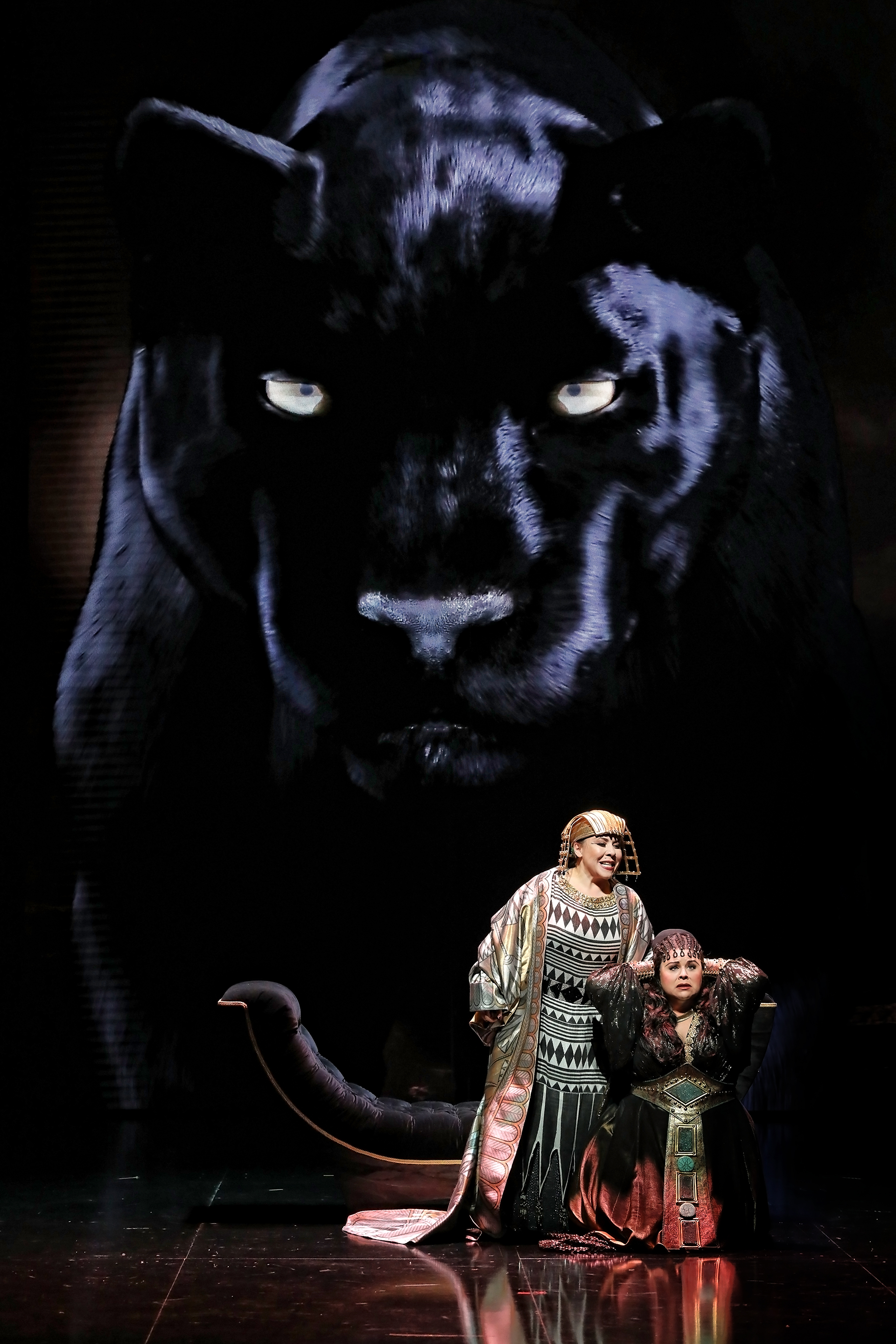 Of course, the whole point of theatre is that it happens live, in front of your eyes, in three dimensions, instead of by means of a screen, and so opera purists are skeptical of the break from tradition. But the way the LED panels rotate and move around the space, as well as cast tangible shadows, makes them part of the physical set. The panels are also augmented with actual setpieces and a mass of bodies. You certainly never feel like you are sitting in a cinema.

Impressingly, none of the singers are eclipsed by the spectacle of the production. The vocal presence of American soprano Amber Wagner as Aida, the Ethiopian princess enslaved in Egypt, is unmatched by anyone I have ever heard in the Joan Sutherland Theatre . From her very first notes, the sheer decibels she emits are arresting. She soars over the chorus and the orchestra with intensity, whilst maintaining fine tonal balance and brining forth plenty of emotion. 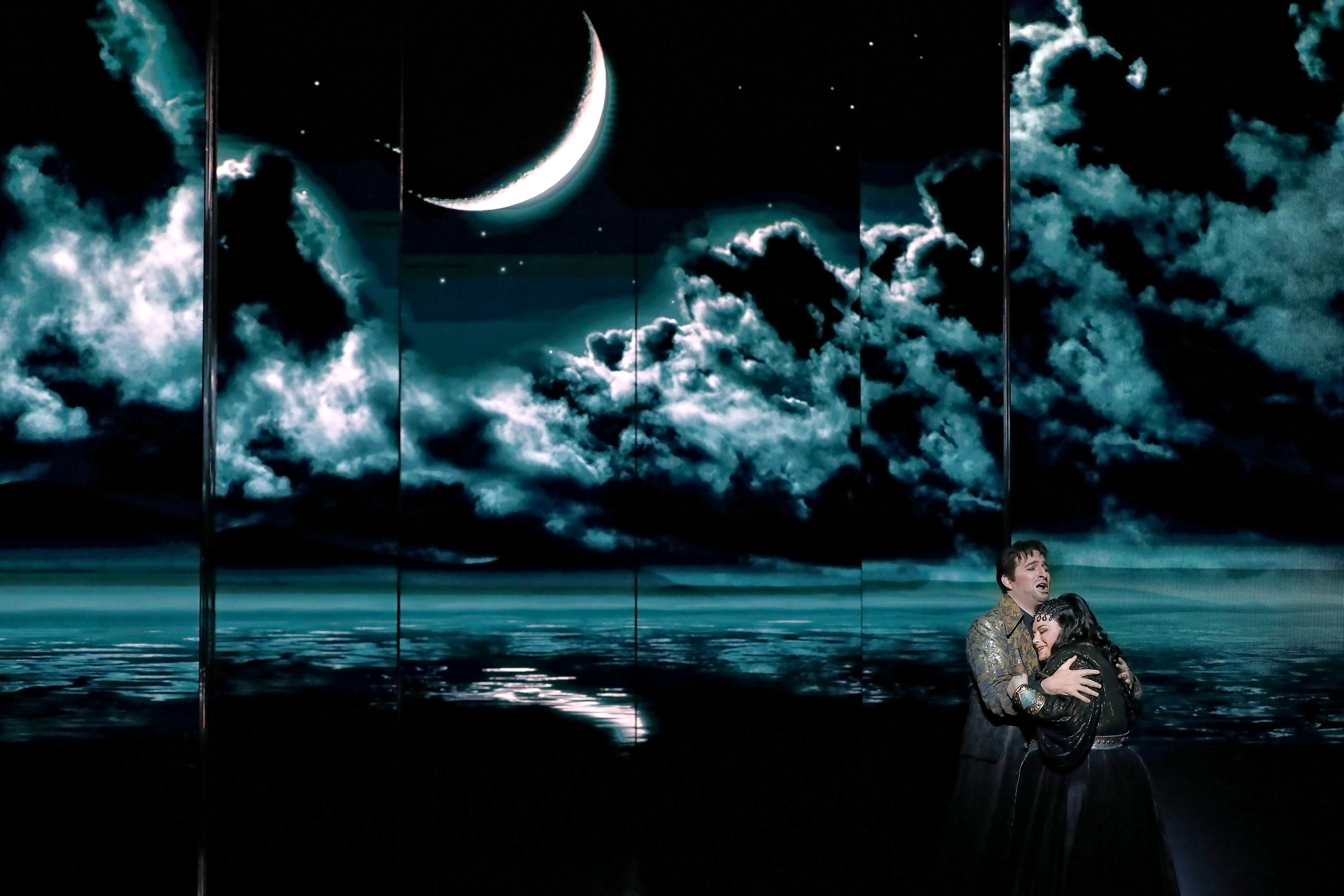 Elena Gabouri as Amneris, the daughter of Pharaoh, Aida’s mistress and rival in love, after a slow, restrained start, rises to the bar set by her powerful female counterpart and proves that she can be just as bold.

Tenor Riccardo Massi sings evenly and passionately and delivers a heroic performance as Radamés, Egyptian war lord and Aida’s secret lover, although he seems more than a little overshadowed by these two gutsy women. Worthy of note are the vocal and dramatic performances of Warwick Fyfe as Aida’s father and the captured King of Ethiopia, and baritone Jud Arthur as Pharaoh.

As a pleasing contrast to the larger than life vocals of the leads, the male chorus achieves some unbelievably nuanced pianissimo moments, considering their size. The orchestra, under the baton of young Andrea Battistoni, roars through Verdi’s grand, melodramatic score, matching the heights of volume set by the singers, without ever drowning them out, especially in the more intimate moments. The celebratory Triumphal March, big, bold and brassy, is given extra oomph with trumpeters appearing unexpectedly in the balconies to the left and right of the stage, bringing us the sonorous sound of one of the most famous pieces of classical music ever written, in stereo.

The ballerinas, as possessed Egyptian priestesses, are a highlight, thoroughly committing to the interesting choreography, which varies from lithe, nymphlike floating and bouncing, to fierce Hakkaesque warrior moves, harakiri ritual and battle cries. 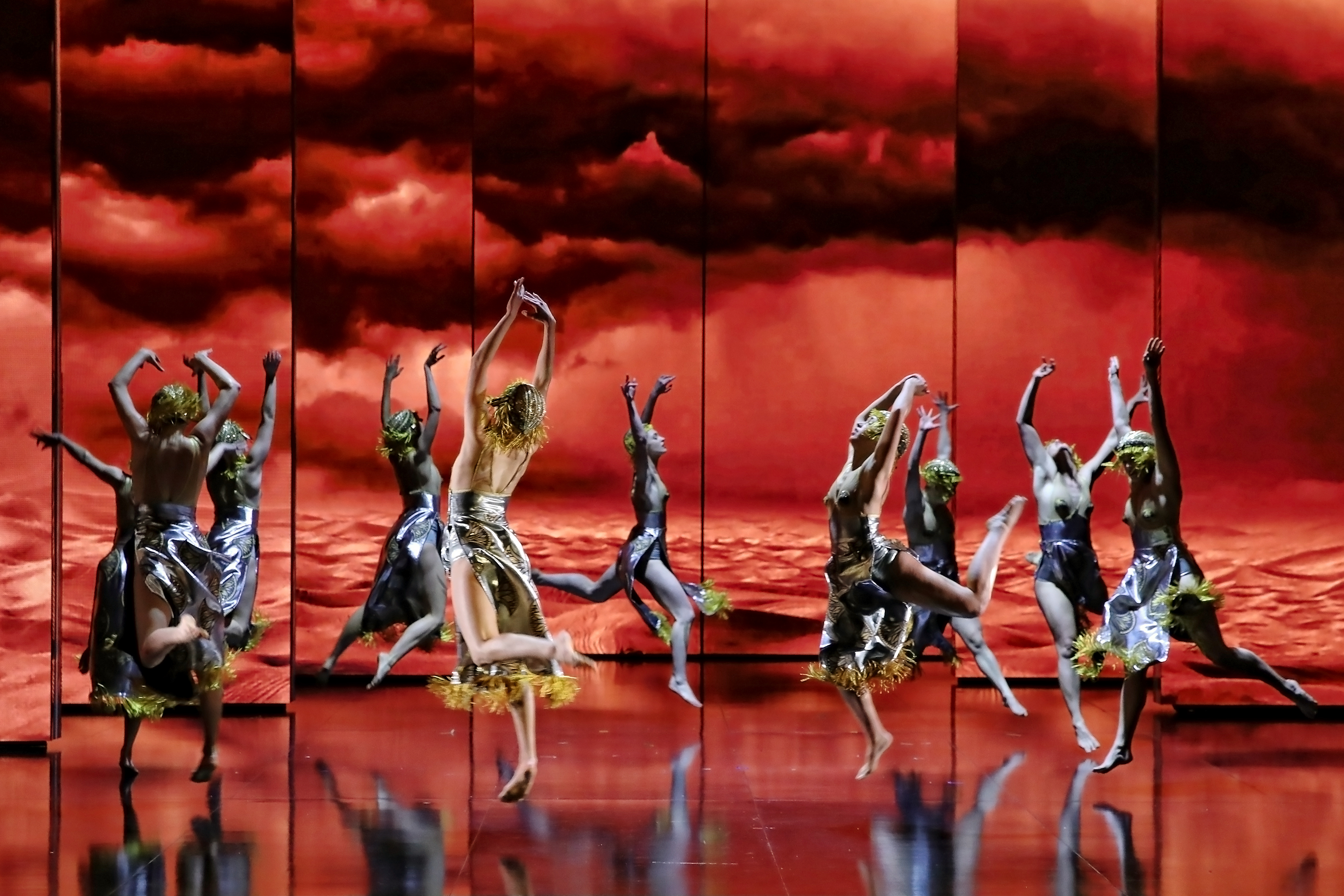 On a negative note, or rather, on a curious note, when Radamés sings his first exquisite aria, dreaming of his beloved Aida, the screens, which are supposedly projecting his mental picture of her, portray a slender black female figure and face with negro features. Then when Aida appears, it is almost laughable that she is the polar opposite of the image we have just seen. Aida, although Ethiopian, is regularly played by white performers, but this image of the black princess Verdi originally had in mind only serves to highlight the discrepancy.

Moreover, Aida’s costume is very extravagant for a slave who is not known to be in actual fact a princess. The ornamental belt buckle around her ample middle flashes as it rises and falls with every note, making one wonder why she was not draped in a simpler gown. Another point of curiosity is that in the final scene, when Aida and Radamés are in the tomb together dying for love, they sing their duet with notable physical distance between them. The pair do not even touch, let alone embrace or kiss.

The more serious negative point is that those attending opening night on Wednesday 18th July had to try really hard not to be distracted by a small, blinking square of bright blue light, as one of the panels experienced a technical glitch. It was obviously more than a minor issue as the blue light reappeared in the post-interval acts. Of course, teething problems are to be expected in the technical application of the new digital technology and undoubtedly this has already been resolved and performances are running glitch-free now.

With an entire month’s worth of performances of Aida to come, as well as two more productions commissioned that will utilise the LED panels, we are testing whether digital is the way of the future for opera, as it has proven to be for almost everything else, or whether there will be a yearning for the physical set. Regardless of whether the revolutionary approach is fully embraced by traditionalist audiences or not, even if it is here to stay, it will likely be featured in some works and not others.

Do not miss the opportunity to experience this extraordinary theatrical thrill whilst it is yet brand new. This production of Aida is opulent, colossal and captivating. An exhilarating night at the opera.