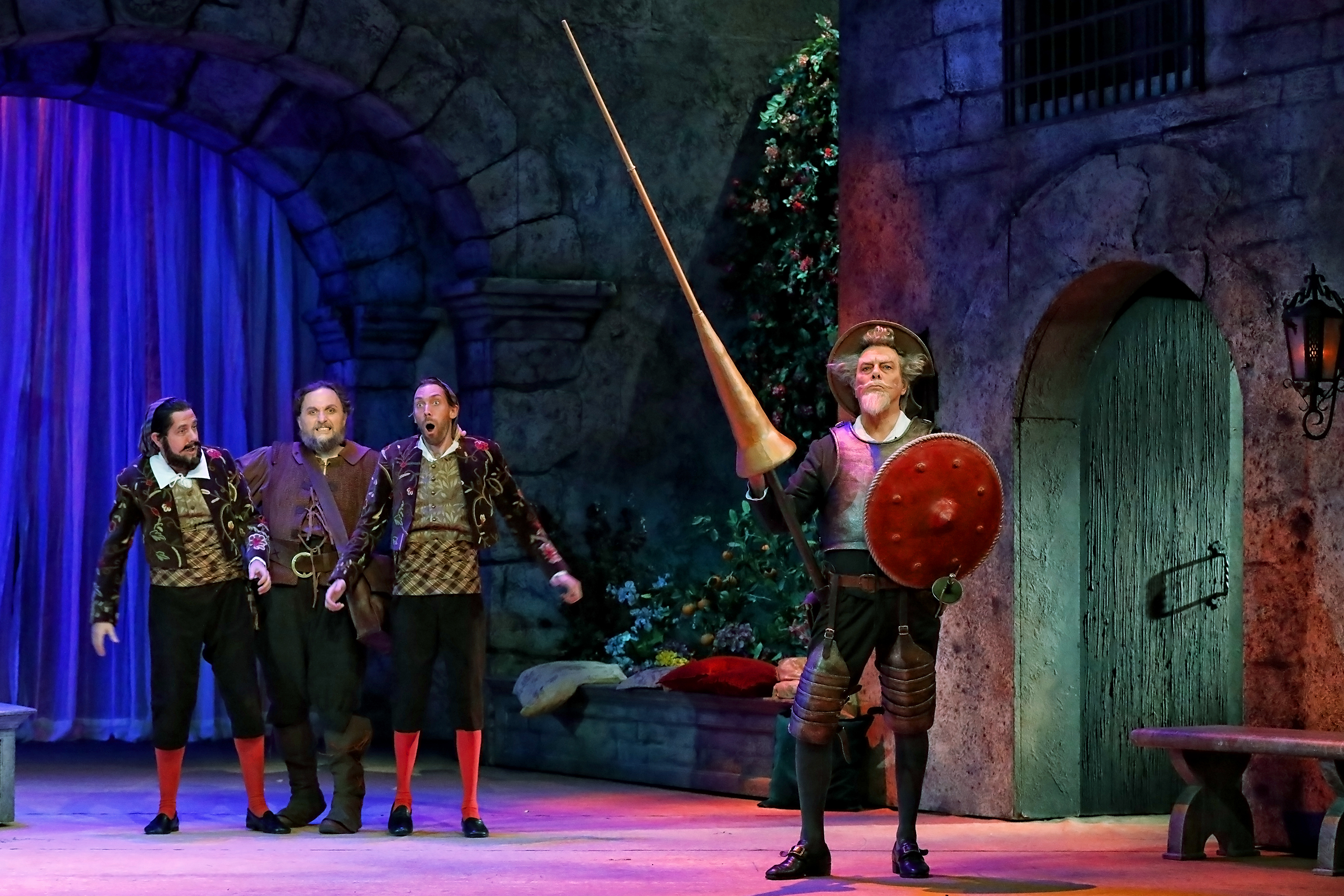 Massenet’s Don Quichotte premiered in Sydney last Friday, March 16. It had neither been performed by Opera Australia since the company was founded in 1956, nor performed in Sydney Opera House since the venue opened in 1973. This was for Australian audiences a true premiere. Congratulations to Opera Australia for adding a new work to its’ repertoire and bringing us something so very different.

The opera, written by 19th-century French composer Jules Massenet, is quite an obscure one. It is unlikely you will recognise any of the melodies, as there are no particular standout arias or duets that have made their way into popular consciousness. Having said that, the music is absolutely gorgeous throughout. Simple melodies and richly coloured orchestration paint a clear picture of place and time, helping to set the scene for each of the five acts. The Opera Australia orchestra, under the wildly alive baton of the very expressive French conductor Guilaume Tourniaire, played with pure pleasure, producing a sound sensuous, sonorous and magical.

As a wonderful contrast to the serious score, the text on which the libretto is based is a comedy. Fully titled The Ingenious Nobleman Sir Quixote of La Mancha (Spanish: El Ingenioso Hidalgo Don Quijote de la Mancha), it is an early 17th-century Spanish novel by Miguel de Cervantes Saavedra. Cervantes’ Don Quixote is considered the most influential work of literature from the entire Spanish literary canon and regularly appears high on lists of the greatest works of fiction ever published in any language. The story follows the adventures of a nobleman who reads so many romances that he loses his sanity and decides that it is his duty to revive chivalry, undo wrongs, and bring justice to the world. He proclaims himself Don Quixote de la Mancha, Knight of the Long Countenance, and recruits a simple farmer, Sancho Panza, as his squire. Together they set out on a quest to retrieve a necklace stolen by a gang of bandits from a beautiful lady, with whom Don Quixote is besotted.

I was impressed to note that the irony of the action was not lost in the emotion of the music, and vice versa. There are a number of comic moments, reminiscent of Monty Python, which would simply come across as bad melodrama rather than intelligent comedy if not played or staged well. One of these moments is when Quichotte is taken prisoner by the bandits, tied up to be killed, but then manages to mesmerise them with a song to the point where they not only extend mercy, release him and return the stolen necklace, but also beg forgiveness and a blessing from the mythical Christlike figure. 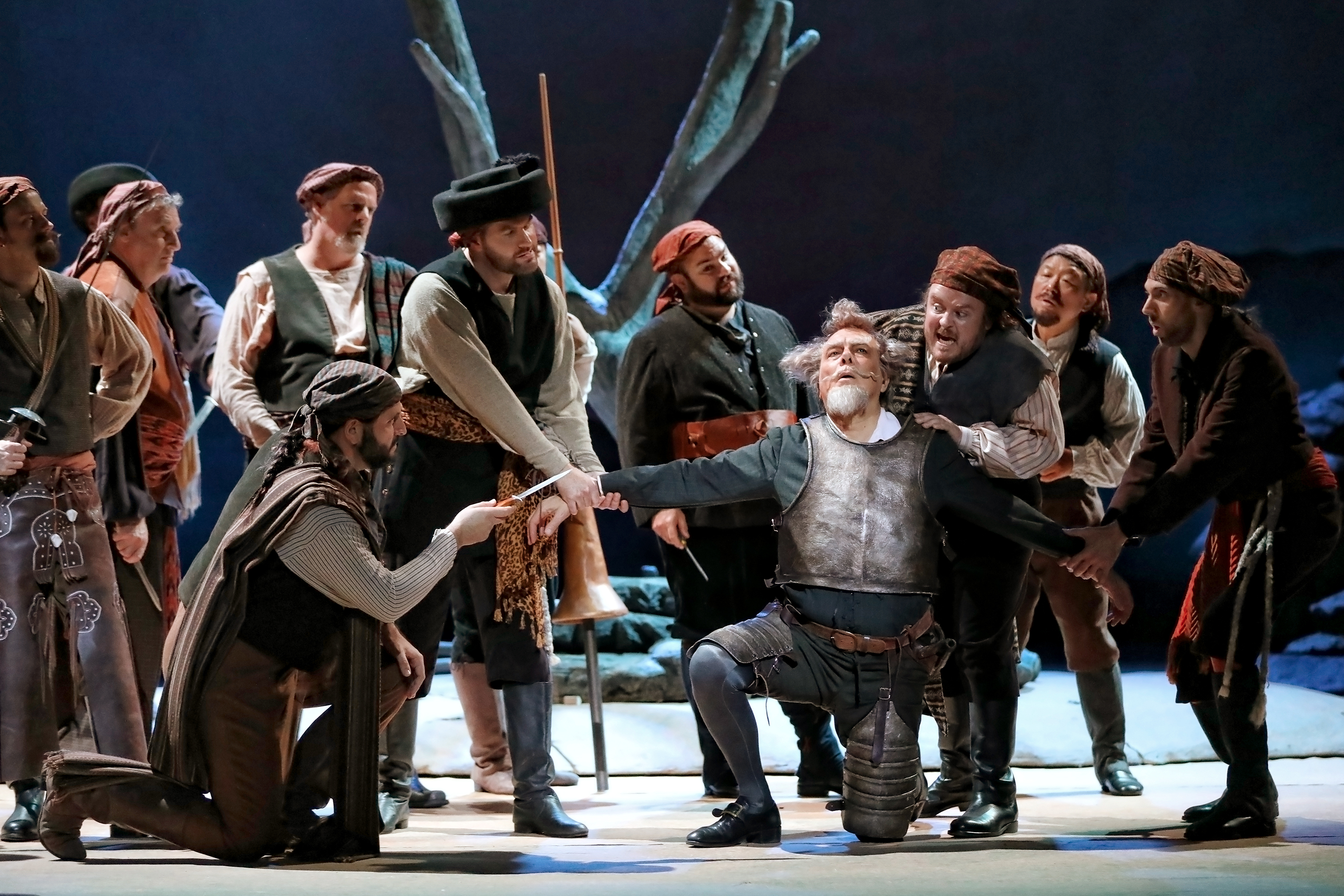 The set design and lighting is very effective in the scene where Don Quichotte mistakes windmills for giants and attacks them. Starting with one large windmill visible onstage, gradually the sun rises and reveals one after another at staggered distances in the depth of the stage, creating a realistic perspective of size, space and number. Then there is a lighting projection of more windmills in front of the stage, as if the actors whilst facing the audience are looking right at the spinning arms. In a matter of moments, Don Quichotte and Sancho Panza go from being in the middle of a field next to one windmill to being surrounded by innumerable windmills, to the front, back and sides. It’s a spectacular scene and also serves to shine a light on Quichotte’s mental instability. If the ridiculous costume of shining armour with skinny tights, hat instead of a helmet, an exaggeratedly long sword, thin, twisted moustache and hair parted into three tufts was not enough to herald that this was not a real knight, the scene with the windmills leaves no doubt. 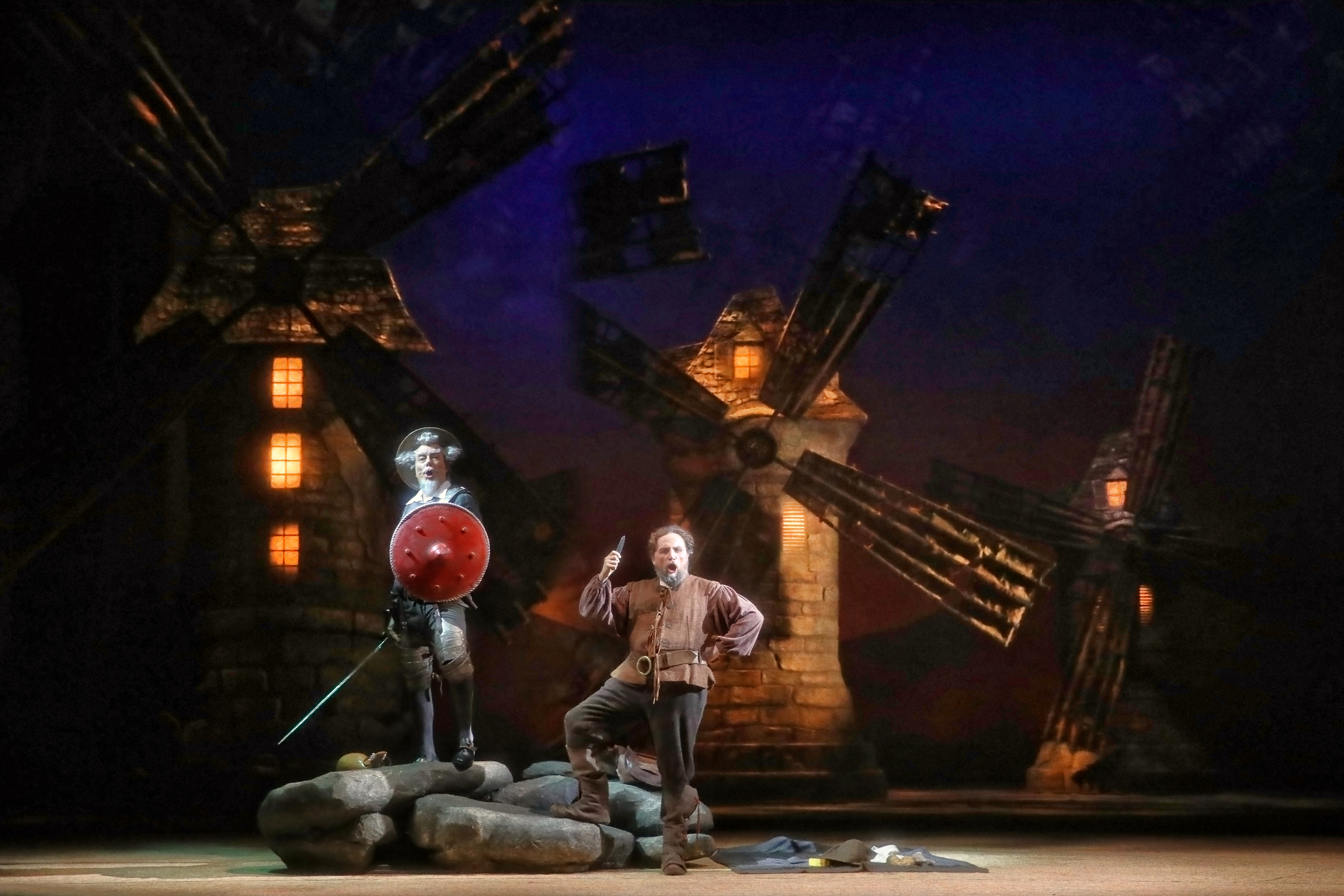 Unfortunately on opening night celebrated Italian bass Ferruccio Furlanetto was unwell and unable to perform as Don Quichotte, which he calls ‘the role closest to his heart and soul’. After a successful 44 year operatic career, Furlanetto is the perfect Quichotte, a slow, aging character. Furlanetto insists ‘It’s not a role for beginners — not even for singers in their 40s. It should be kept for when you have more experiences of life and of everything’. As fate would have it, Furlanetto’s last-minute replacement on opening night was young bass-baritone Shane Lowrencev.

Although Lowrencev’s voice lacked some of the power, control and finesse that come with maturity, he undeniably impressed the audience, receiving extended applause as well as cheering, whistling and many ‘bravos’. He delivered his lines without fault and with a reasonable French accent too. Given the fact that he was not expecting to be performing, his level of preparation was surprisingly complete, showing sincerity and dedication. He definitely suited the role physically speaking. Standing two metres tall (6 foot 7 inches) with slightly stooped posture, long, gangly legs and comically skinny ankles, he was the exact image of the ‘bag of bones’ knight that ‘looks like he hasn’t eaten in two years’. Lowrencev, if given more opportunities like this, will undoubtedly grow into this great role.

Warwick Fyfe was a perfect Sancho Panza, Don Quichotte’s faithful, long-suffering squire. Some of the funniest lines are those of Sancho Panza, who often employs wit in dealing with the rhetorical orations of his delusional master about heroism and gallantry. Fyfe’s shorter, rounder physique in comparison with Lowrencev’s makes for a classic comedic combination. His gestures, movements and facial expressions too show a good sense of comic timing. Although Sancho Panza sees the world for what it really is, he plays along and lives out the knightly story that Quichotte has imagined for himself, thus dignifying the master he does genuinely love and admire. Through Sancho Panza we get to enjoy some laughs but we also get to see that although Quichotte is eccentric and idealistic, he is earnest and endearing. Beyond being funny, Fyfe sings beautifully, as does Elena Maximova in the role of La Belle Dulcineé, the damsel in not so much distress.

A unique feature of this production is the projection of some well-chosen quotes from Cervantes’ novel before each of the five acts. It is a literary masterpiece, after all, so it was a masterful directorial choice to give the audience the chance to dwell on some of the wise proverbs and pretty prose, whilst listening to Massenet’s meditative musical interludes. Interestingly, one of the interludes, between Acts II and III, was taken from another Massenet work, the ballet Le Cid. It connected seamlessly.

Don Quichotte is an opera well worth seeing, especially if you have seen most or all of the other more frequently performed operas. This is an expertly staged production in period costume. The contrast between the serious musical composition and the comedic text is fresh and interesting. It is rare to find a death scene which can draw both a tear and a laugh. I haven’t even seen this with the chosen lead and already I hope it becomes a regular in the Opera Australia repertoire.

House of Discovery with Dan Murphy’s