Bell Shakespeare opens the 2018 season with the love story of the world’s first celebrity couple. Before Kim and Kanye, there was Antony and Cleopatra. Theirs was a love for the ages. Antony and Cleopatra’s affair certainly did not ‘wear the rose of youth upon it’. Passionate, grand, cynical, yet completely without corruption, this middle-aged love endured despite politics, war, and marriage to other partners. The Egyptian Queen and the Roman General-cum-Ruler lived, loved and led the world in the tumultuous decade succeeding the assasination of Julius Caesar, during which period Rome went from a Democracy to an Empire and Egypt saw the decline of her last Pharaoh. The play is set in a fascinating point of history and revolves around some of the most famous and powerful characters this world has ever seen. 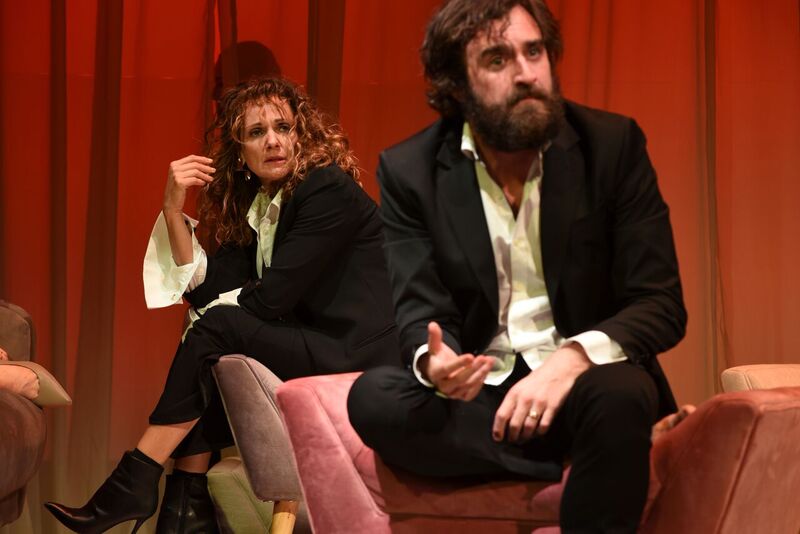 This production of Antony and Cleopatra is a very different take on the historic tragedy than has been staged previously. Adult, modern, intense and with a social conscience, it focuses less on the romance and violent action of the plot and more on the conversations and speeches. This serves to highlight the underlying politics of gender, power and leadership — on an individual plane of internal struggle, on a domestic plane of relationship battles, and on a global plane of civil and international war.

Shakespeare has the scene change from Rome to Alexandria to Athens to various other ancient cities, and many stage and film productions have put a lot of effort into lavish and detailed set designs that capture the essence of these locations. This production does not try to do anything of the sort. A simple, almost bare stage with a raised circular platform and a few modern lounge chairs could be an oval office or a hotel function room anywhere in the world. The only hint that the location has changed is in the colour of the lighting. This boardroom of sorts becomes the meeting space for powerful people to negotiate, make decisions, broker deals and literally carve up the world. An inner and outer circle of sheer silk gauze curtains is an effective tool for revealing in a backgrounded way the slow-motion entrances and exits of the actors.

In Bell Shakespeare style, the actors are on stage throughout, whether their character has an active role in the scene or not. This creates a feeling of a chorus, which classically is the witness to the action, or the conscience of the play, drawing a focus on and censuring the characters’ actions and motives, suggesting the idea that nothing is ever really hidden from view. Although this device worked extremely well in their last production of The Merchant of Venice for instance, a play centred on justice, it does not always work in this play. The intimacy of some of the interactions between Antony and Cleopatra and the passion and compulsion of their bond is lost due to the constant presence of so many people. 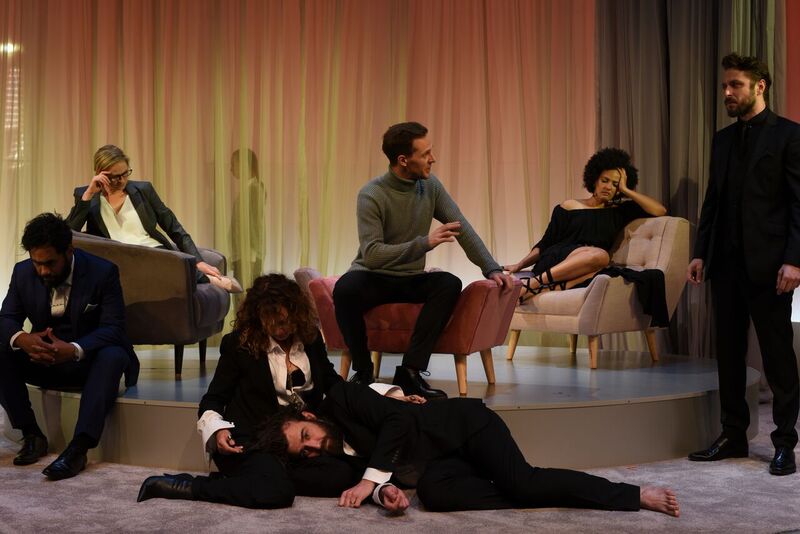 As is Bell Shakespeare’s wont, the costumes are modern day. There is not a toga to be seen. Forget the classic Elizabeth Taylor image of Cleopatra in a gold headdress and catseye make-up. With all dressed in business suits as pen-pushing bureaucrats rather than Kings and Queens, there is almost no distinction between male and female, making Cleopatra very much Antony’s and Caesar’s peer. Shakespeare’s Cleopatra is a formidable female, arguably the most vital, subtle and complex woman in the Shakespearean canon. Director Peter Evans has heightened this strength by stripping her of her feminising garb and hence of the male gaze. Anna Cordingley’s Cleopatra costume has long French-cuffed sleeves extending beyond the pushed up sleeves of a black suit jacket, which together with flared trousers and messy hair, gives her a rebellious, Indi-rock vibe. This Cleopatra is someone women admire rather than someone men desire. To further push the point, the role of the rebel general Sextus Pompey, Cleopatra’s attendant Alexas and other supporting roles have been gender-swapped to put more women on stage and hence balance out the machismo that can overwhelm the play. These switches also serve to introduce a lesbian slant to key relationships. The point made about gender balance and authority is important and although Evans has introduced it in a very outstanding way, it could be explored further to be fully realised, as it was in last year’s Richard 3, with Kate Mulvany in the title role.

A unique central performance from Catherine McClements carries this entire production. Shakespeare endowed Cleopatra with outrageous, bombastic lines, from her tart comments to her companions/attendants, to her both fraught and poetic exchanges with Antony. McClements’ Cleopatra may not look Queenly, but she is certainly Queenly in attitude — audacious, charismatic, capricious and tough. McClementes lifts the text off the page, speaking each line with freshness and naturalness. We sense both her character’s bravado in the face of deception and doom, and her genuine bravery. Unfortunately, the climactic suicide scene with the famous Nile asp at the breast definitely lacks the expected impact. 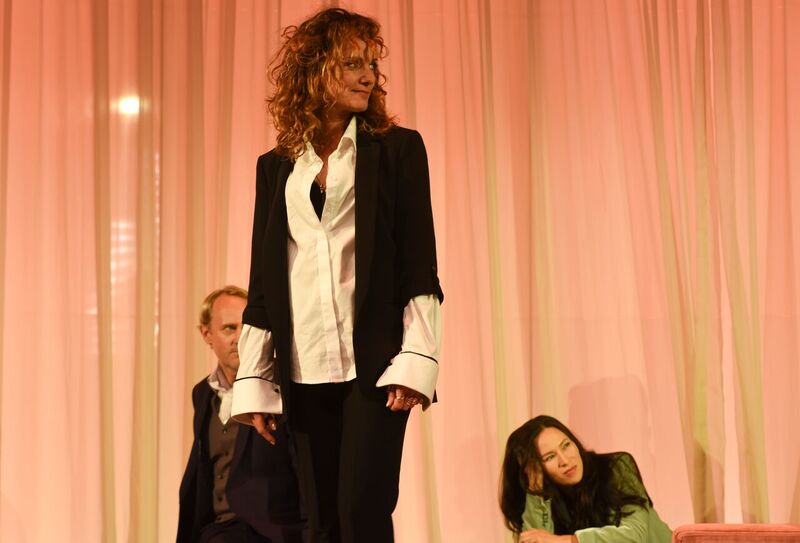 Johnny Carr, with his Aussie accent, skinny fit suit pants clinging to the shape of his legs, and lumbar-sexual beard (which no self-respecting Roman soldier would sport), plays an almost bogan Mark Antony who seems to be punching above his weight with McClement’s Cleopatra. It’s an interesting understated interpretation of the ordinary side of Antony’s character, drawn more from his domestic self than his State self. This casualness is especially evident in contrast with the tight, straight, dry performance by Gareth Reeves of Octavius Caesar. In his grey turtleneck and grey coat and with his distinctly more refined English, Caesar comes across as a very clinical, bureaucratic leader in a world running riot with charismatic style leaders, led by their emotions and desires.

Ray Chong Nee’s Enorbarbus impresses with his large presence and booming voice. His lazy timing, savouring the most delicious words, brims with subtlety and style which simply cannot be learned. Zindzi Okenyo as Charmian and Janine Watson as Alexas are both effective, especially in their comic lines. 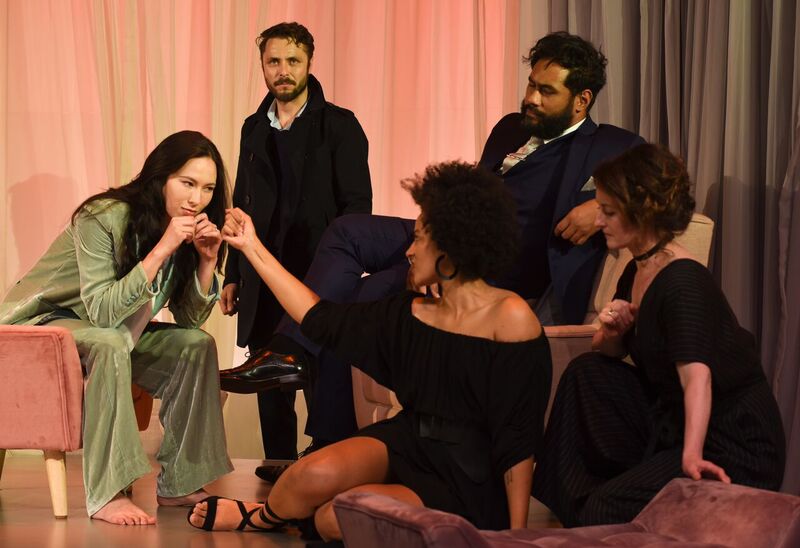 Most of the action of the plot is not played out on stage but flashed as headlines across the curtains by Benjamin Cisterne’s bold lighting projection. It is well designed and executed, packs a big visual punch (especially in combination with Max Lyandvert’s obtrusive soundscape) and certainly serves to move the story forward quick-smart. The decision to cut out game-changing physical drama that occurs between scenes is in line with the language-focused angle of this production. What many previous directors of both stage and film adaptations have done is make more of the fighting than Shakespeare himself did. Much has been made, for instance, of the moment in which mid-battle Cleopatra turns her ships around and flees, with Antony’s navy following suit, losing them the war and leaving the victorious Octavius Caesar as lone and undisputed ruler of Rome. In the original text, however, all we have is the conversation between Antony and Cleopatra about what took place (Act III, Scene 11). In this sense, one could praise Evans for his restraint and high-mindedness in allowing the big, exciting language to speak for itself.

This kind of conversation drama, however, is not exciting for everyone. Take for instance Steven Spielberg’s wordy 2012 film Lincoln, which had critics separated into opposing camps. It was at once hailed as ‘a fascinatingly theatrical contest of rhetoric and strategy, far from the brutality and chaos of the battlefield’ and ‘a (barely) animated history lesson, and a pious drag…Thin gruel to sustain us over two and a half hours’. Like Lincoln, this production of Antony and Cleopatra is all about backroom intrigues, political skulduggery and hyperbolic verbosity. Aside from some choreographed movements during the drunken revelries, a full song-length freestyle dance curiously slotted in, and the obligatory death scenes, the play is rather static. Evans, like Spielberg, contains the energy and instead dramatises the formality, procedure and ritual of diplomacy and war, the politics on which everything depends. This structural decision is a brave move sure to divide audiences. Certainly on opening night there were mixed reactions.

Antony and Cleopatra is a work rarely performed. For this reason alone it would be of interest to regular theatre goers and Shakespeare buffs, as finding an obscure record would be for music lovers. Add to that the fact that the language is some of Shakespeare’s most mature and complex, as well as the intriguing and risky directorial choices made by Peter Evans, and you have a piece that will delight and impress a niche audience of Shakespeare lovers who relish the text itself and who, in terms of staging, have seen it all before and are craving something new, different, and with a relevant message. On the other hand, without the help of traditional costumes and staging, the wordiness could prove overwhelming and may fail to provide sufficient entertainment for Shakespeare novices.

Bell Shakespeare’s Antony and Cleopatra is showing at the Playhouse, Sydney Opera House until April 7, before it goes to Canberra Theatre Centre April 12 – 21, and Arts Centre Melbourne April 26 – May 13

Disclaimer: Alicia Tripp was an invited guest of Bell Shakespeare