Opera Australia’s sophisticated and yet accessible production of Carmen has something for everyone. Opera aficionados who feel they have seen it all will enjoy and appreciate the insightful and adroit directorship of theatre legend John Bell. Opera novices will be entertained by the near musical theatre level of dancing and acrobatics, as well as chuffed to recognise many of the tunes.

Carmen is probably the world’s most famous opera. It has been staged unceasingly since its Parisian premiere in 1875. On the big screen, it has been reincarnated multiple times. Carmen has been embodied by mega star sex symbols from Rita Hayworth to Beyoncé Knowles, whilst her lover Don José has been played by Enrico Caruso, Plácido Domingo and even Charlie Chaplin. The tragic story has been translated into a comedy, reimagined as a ballet and revived as a hip-hopera. There has been a silent Carmen, a Carmen on Ice, an all-black Carmen and a homoerotic Carmen.

There is no doubt about it, the world loves Carmen and has remained faithful to her, although she herself never actually loves anyone and fidelity is not her strong point.

Carmen is a beautiful and magnetic woman who, even surrounded by girlfriends, manages to attract all the male attention. Her reputation precedes her as a serial dater of sorts, each flame lasting no more than six months. She insists that she only loves those that do not love her and true to form, falls for Don José because he is indifferent to her.

Don José, although a soldier, is really a naïve, provincial mummy’s boy, destined to marry Micaëla, the girl next door. That is, until his fated encounter with Carmen. The flower she tosses him strikes him, as he says, like a bullet in the chest. He becomes slavishly infatuated with Carmen, sacrificing all for the hope she dangles in front of him.

Carmen, not surprisingly, soon loses interest in her conquest and develops a new infatuation, just as superficial as the last. The victorious and celebrated bullfighter Escamillo arrives with his crowd of admirers and his garish macho display, laying claim to Carmen. This piques Don José’s quickly growing jealousy. Not even the earnest efforts of the sensible and devoted Micaëla and the pull of his dying mother can save Don José from himself. 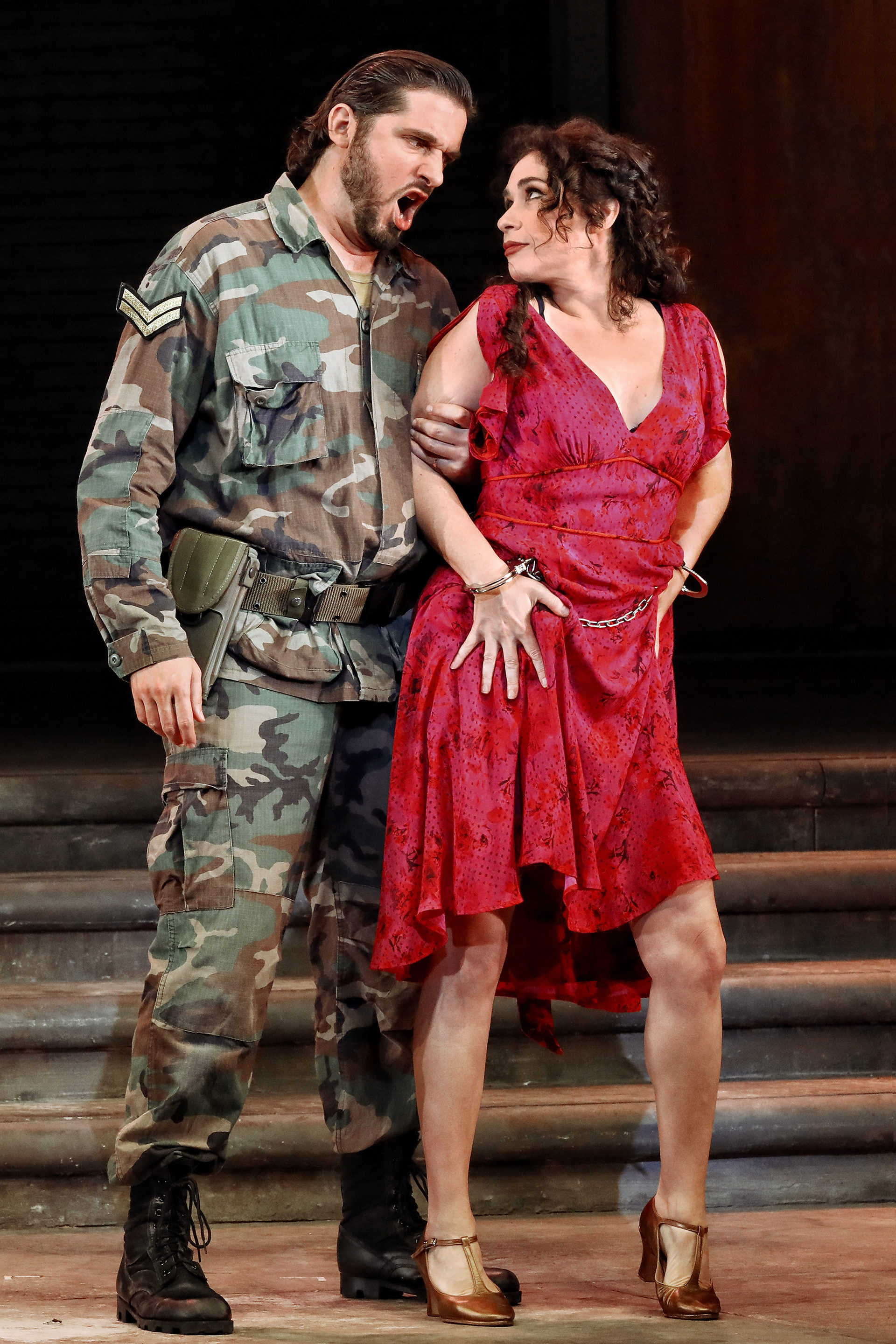 The exciting storyline is underpinned by a very accurate psychology. Push aside the obvious gender stereotyping – a product of the time of writing – and you will see a still relevant analysis of all too common relationship errors. Director John Bell poignantly questions, “Why do Carmen and Don José each choose the one person they know is going to prove fatal to them? And why do they remain locked in a relationship that can be resolved only by their violent deaths?” All the warning signs are there. Safer alternatives exist which promise happier endings. But this is what we do to ourselves. We so often look felicity in the face only to turn away and choose suffering.

The collaboration of John Bell with Opera Australia has proven once again to be a thing of beauty and power. The founder and former Artistic Director of Bell Shakespeare is one of Australia’s most acclaimed theatre personalities, with an extraordinary career as an actor, director and producer. He brings with him a deep understanding of theatre, adding this to the unquestionably high musical standard of Opera Australia’s vocal and orchestral talent. Together, they make a power couple.

Bell, with his characteristic emotional acuity, hones in on the dysfunctional central relationship, highlighting the path Don José travels from ambivalence to obsession. He also draws an intriguing focus on the relationship between Don José and his mother, who exerts a strong presence, although never appearing on stage.

Argentinian-born Marcelo Puente gives a convincing performance in the lead male role. In the Flower Song, in which he pleads with Carmen to believe that he loves her, he collapses like a child, smothering her shoulders and arms with tiny kisses and burying his face between her breasts in an infantile gesture which betrays a deep mother-figure complex. The acting is top shelf and one can undeniably see Bell’s sure hand behind it. Musically speaking, Puente is a wonderful Don José. His voice has natural power, with a robust middle register almost closer to a baritone than a tenor, which is perfectly suited to his menacing, masculine image as a uniformed bully. On the other hand, he is also able to achieve unexpected sensitivity, commensurate with the flip side of his character, the soft underbelly of emotional immaturity which becomes exposed and leaves him vulnerable and hence volatile.

This season is fortunate to be led by Israeli mezzo soprano Rinat Shaham, one of the world’s most experienced and acclaimed Carmens. She has embodied the role for 14 years and traveled the world in Carmen’s skin. Physically she is exotic and attractive, as the femme fatale must be. Admittedly, Shaham is now rather on the mature end of the scale to be believable as an object of universal male lust and her moves are not so feline as other Carmens, but there is more to sexuality than that. There is something truly sultry about her.

The character of Carmen is so iconic that it is difficult to interpret well. The qualities of sensuality and tempestuousness are all too easily overplayed. Shaham’s Carmen, however, is always in control of the situation and of herself. She flirts and seduces with the same defiance with which she darts her sarcasm and passive aggression. She sways her hips and exposes her flesh like a tigress. It is a dramatically compelling performance.

But the real beauty and emotional depth lies in Shaham’s vocal interpretation. Her tone is voluptuously rounded and full of colour and shading. Her lower register is deep and velvety, like rich dark chocolate, whereas there is a golden glow to her higher notes. Most impressive is the extreme dynamic contrast she achieves. In the famous Habanera she starts at such a low, controlled pianissimo that one would think the orchestra would drown her out, and yet that never happens. The balance is always just right. Girlish sex kitten or not, Shaham is clearly in her vocal prime.

Michael Honeyman as the bullfighter Escamillo owns the stage, or rather attempts to, for the famous Toreador’s Song. He is a committed actor and successfully mocks the figure of the toreador, whose anthem mansplains his self-proclaimed hero status. Honeyman endeavours to be larger than life with plenty of flair and flash, but there is no making up for his lack of stature, as he is dwarfed by some deliberately placed and particularly statuesque chorus girls on the step above him. This little problem leaves him short of fully convincing as a macho sports champion and a red hot Latin lover. Rather than being a failing, this cleverly serves to reinforce the superficiality of his celebrity and Carmen’s love for him. Vocally he does a more than serviceable job of one of the crowd-pleasing numbers, which contains some notes quite high for the baritone range. 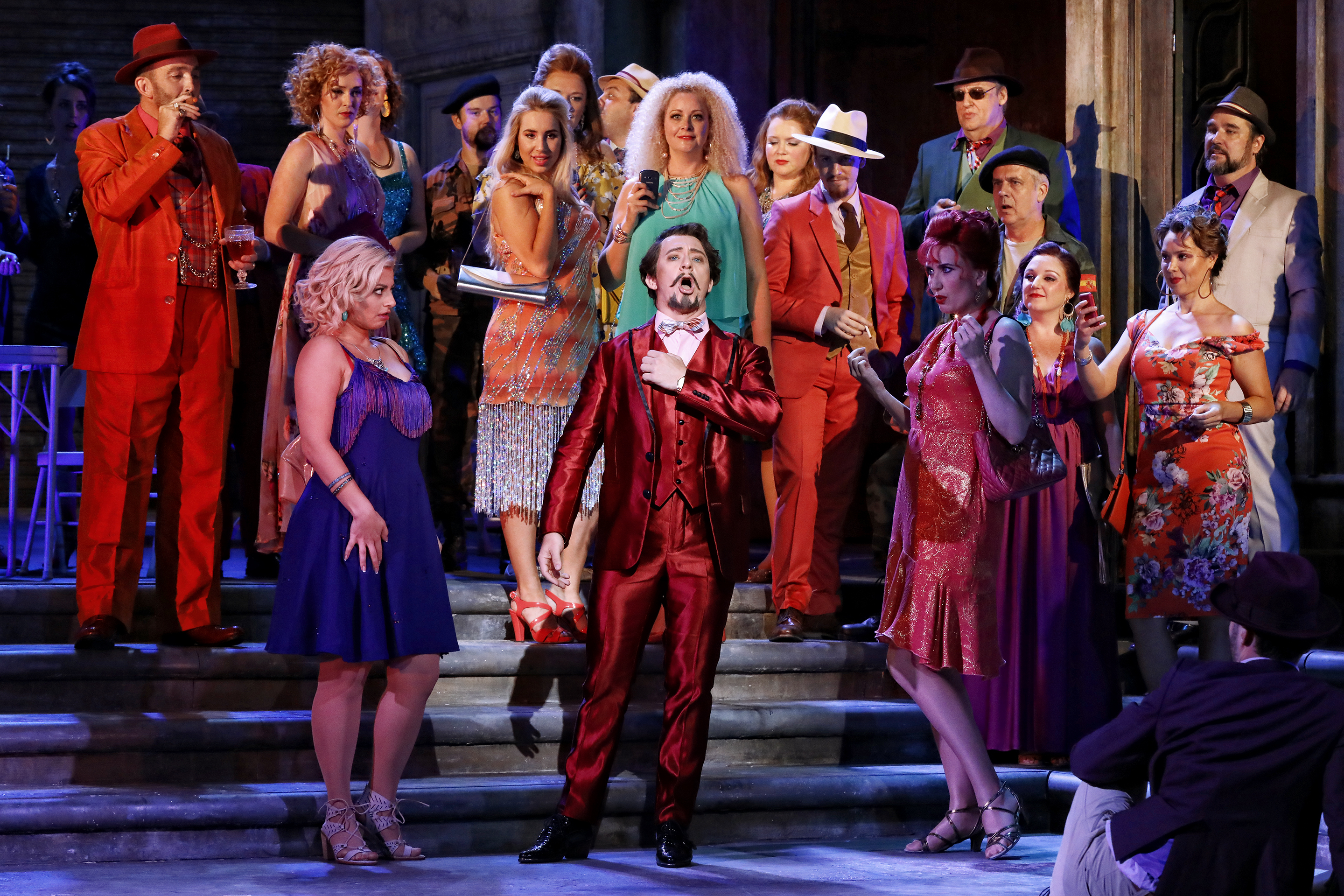 Mention must be made of young Australian soprano Stacey Alleaume who sings Micaëla’s deceptively tricky aria beautifully, winning over the audience for more than just her Virgin Mary appearance. Notable too is Jane Ede’s powerful, clear voice ringing out over her co-singers. Although in this series she plays a minor role, that of Frasquita, one is reminded of her ability, clearly demonstrated at this year’s Opera in the Domain in which she sang title role arias from Carmen.

As he is fond of doing in his Shakespeare stagings, Bell has opted for a contemporary setting. Getting away from the traditional flamenco dancers and gypsies, he shifts the action from 19th century Spain to somewhere resembling today’s Cuba. Bell notes that Havana, from which the name Habanera derives, “now seems to be flavour of the month”. More than that, it is the closest thing we have in spirit and feel to Bizet’s Seville, the original setting of the opera.

Bizet, the French composer of Carmen, had never traveled to Seville. The place was for him a romantic, exotic dreamland, where the eroticism and vitality that supposedly existed there represented the authenticity missing in his comfortable life. Likewise today, almost nobody has been to Cuba. It has been isolated from the international community for so many decades, resulting in a retro, out-of-touch world of 1950s cars and 1970s fashion. There is mythology surrounding Che and Castro and the public perception of Havana is just as unrealistically romanticised as Seville was for the French 150 years ago.

Michael Scott-Mitchell’s set design takes us to a once grand but now decaying world. There is a central monumental plaza reminiscent of the magnificent crumbling colonial architecture of Cuba. Set against the sun-bleached, washed out stone and peeling walls, Teresa Negroponte’s costumes are a riot of eye-popping colour. An on-stage Kombi van and even a truck complete the scene. 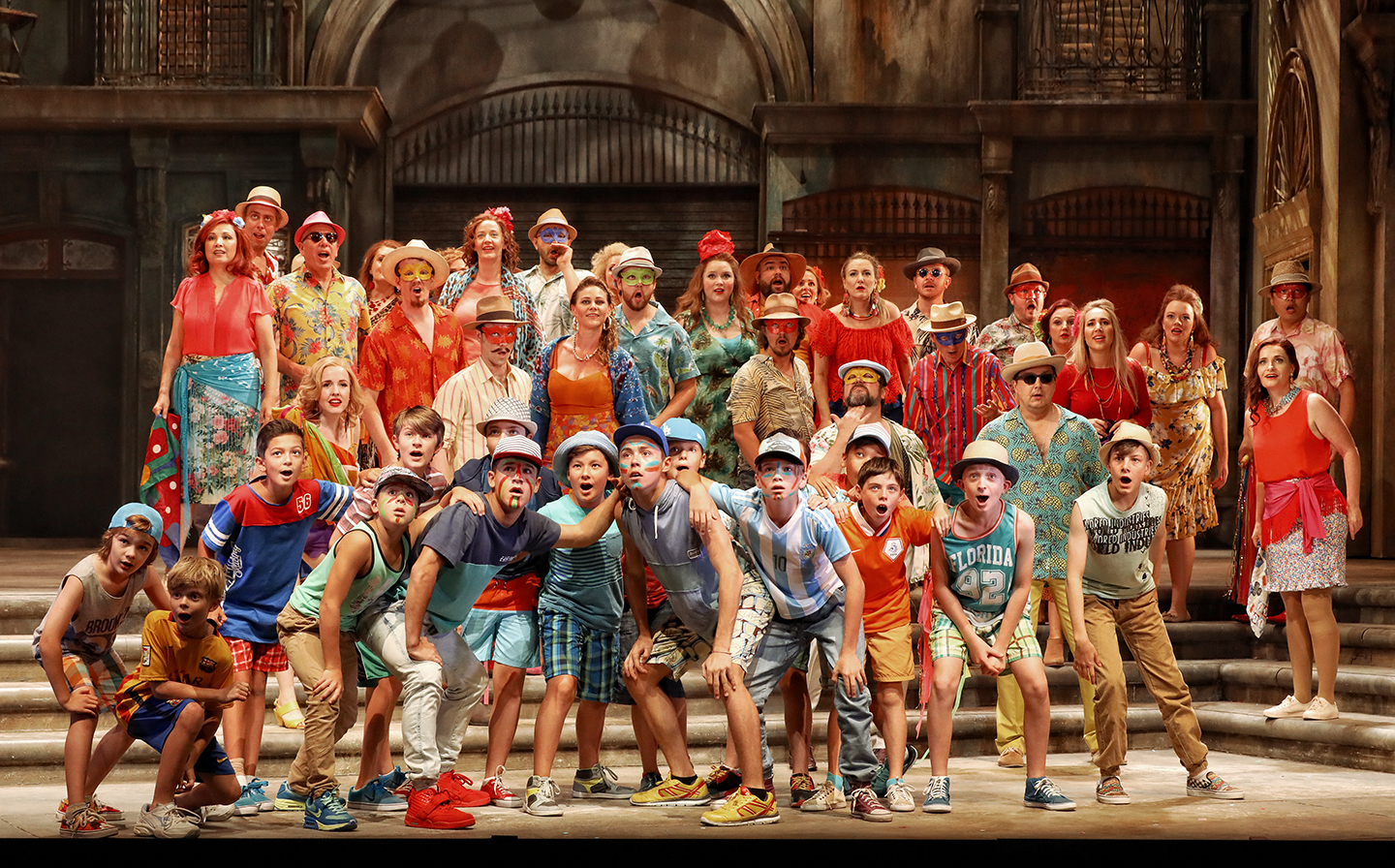 Kelley Abbey’s choreography is given a very prominent role in this production. The opening montage of coupled adult dancers captures depressing cliches of sexiness with a violent edge, foreshadowing the duple physicality to come. The gang of street urchins burst with boyish delight and energy in their body-popping playful antics. Their gymnastics and breakdancing are impressive and inject a sense of fun into the dark and seamy proceedings.

Whether you’re new to opera or not, this Carmen will not fail to impress. The work itself, the particular choices made by the Director and his production team and the stellar Australian and international cast are all brilliant.

Carmen is showing at The Joan Sutherland Theatre, Sydney Opera House, until March 23. Purchase tickets now. The venue is accessible.

Summer of Gin at Grain Bar with Archie Rose

Time to wine down at Sydney’s Riesling Riot