“They’re playing his music through the speakers” my plus one leaned over and observed quietly, as we settled into our seats in the Sydney Opera House Concert Hall. I’d noticed it too as we entered. “It’s because nothing else sounds quite like him” I replied, “and nothing else will take you to quite the same place”. She nodded agreement, and the lights dimmed.

Moses Sumney took to the stage, fully inhabiting the space with his sparse accompaniment. Despite following his social media, I wasn’t prepared for the visual impact of his height. Long, long limbs clothed in billowing black. He approached the podium and launched into song, and the whole hall was entranced. His voice was lilting, billowing like silk scarves cast over us. Illuminated by dark blue lighting, the light and sound and smoke cast a subaqueous spell over the hall. 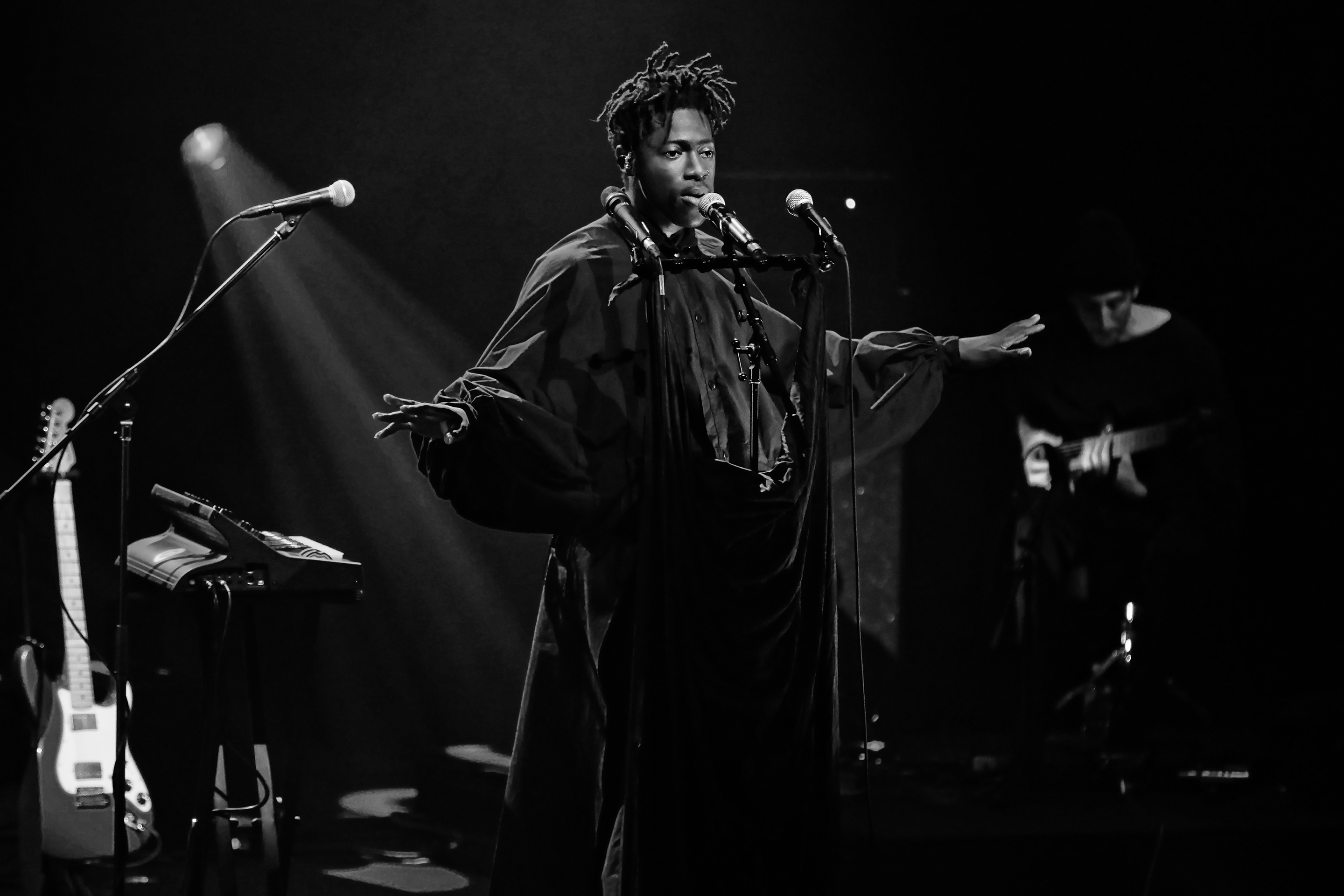 After moving through a couple songs, the instruments hushed. Sumney stepped to the microphone and audibly inhaled – shattering the tension with a relaxed “Hey Sydney, how you doing”.

Fans know Sumney for his soaring vocals. His lower range made more of an appearance in his live show than it does in his album, and it was deep and rich and contrasted with the crystalline falsetto. Though I’m hardly surprised, I was pleased to hear moments of his mid range as well. It’s easier to impress in the vocal extremes, and his mid range was achingly beautiful, with an unassuming clarity to it.

Sumney is one of those performers you can see again and again and again, because no two performances are the same. I went in knowing his recorded songs inside out and upside down, deeply engaged with the nuance of the music and lyrics — or so I thought. He took the songs in directions I’d never have imagined, somehow making it seem as if that was the only way those songs could ever be. I couldn’t tell if he choreographed his movements for the show beforehand or it just happened naturally. It seemed so organic, a simultaneous complement and extension of the music itself, that it surely was the song pulling him bodily around the stage. On the other hand though, how on earth do you improvise something like that? 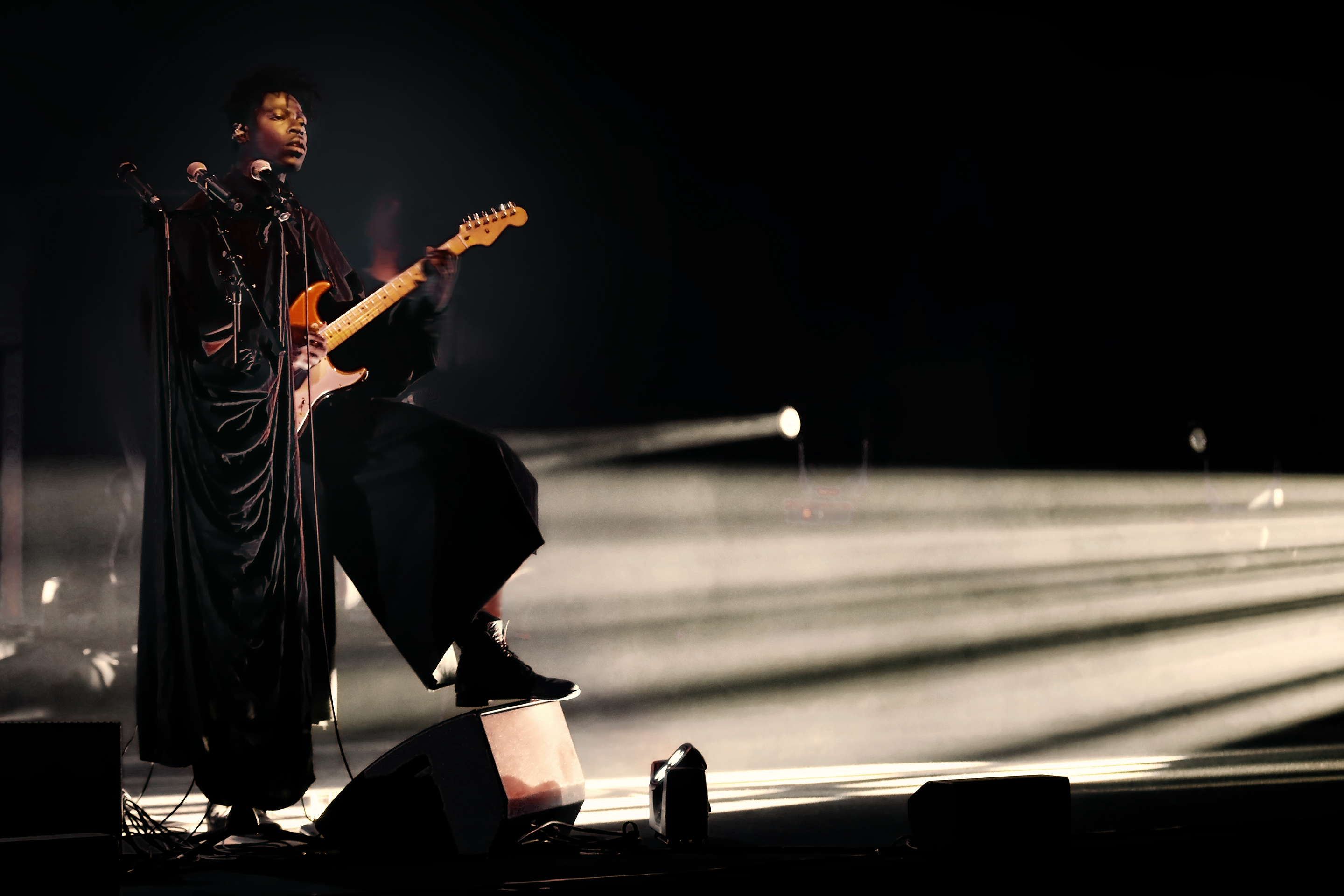 Despite the emotional and aural rollercoaster that his set was, it wasn’t all tension. He introduced his song Make Out In My Car with a “This is for all of you who’ve never been kissed. Which, by the looks of it, is most of you”. It was almost comical, seeing such a tall man passionately expressing such a teenage sentiment. Scatting along with his clarinetist, and grooving with moves reminiscent of Prince, the song was lighthearted and familiar to the audience. Next, he treated us to a song not on the album, which demonstrated his skill as a musician. It takes a deep knowledge and familiarity of music to manipulate key and timing as he did. The song culminated in the construction of a soundscape so tangible, the only thing for it was to close your eyes and let it carry you away.

For someone who released his first album late last year, he provides and demands an astounding level of immersion during his performances. Moses Sumney is one to keep a keen eye and ear out for.

– Liv
Liv S. is a creature of warm weather and negronis. Her interests include live music, trying new things, and triple utterances. Follow her frolics on @callmememphisjones.

Disclaimer: The Plus Ones were invited guests of Sydney Opera House.
Image Credit: Prudence Upton.

Summer of Gin at Grain Bar with Archie Rose