The Merchant of Venice is perhaps the most infamously difficult of Shakespeare’s plays to stage for a modern audience. There is the jarring competition of various plot strands with massively shifting moods, from comedy, to romance to tense drama. There is the morally ambiguous central storyline, which suggests the repulsive idea of a human life being equated to any amount of money. There are the savage, merciless characters, principally a stereotypical Jewish money-lender, equal parts villain and victim, who monstrously seeks a pound of human flesh from his debtor. There are the myriad racist slurs, couched in comedy, which are gleefully hurled by various characters, including those considered to be good and honourable. For these reasons and more, many a veteran Shakespeare director has balked at the political hurdles presented by this problem play. Few would choose to make it their debut.

And yet that is just what Anne-Louise Sarks has done. A Shakespeare first-timer, she directs her own new production of The Merchant of Venice for Bell Shakespeare Company and does so with the moxy that only a feminist has. Sarks does not back away from any of the dark, anti-Semitic issues in the play. The ugliest lines and moments, which would be so easy to cut, thus making the whole experience more comfortable and palatable for actors and audience alike, have been included and what’s more, highlighted. Rather than the hateful comments drawing laughs for their wit and timing, the question mark consistently lands in the right place, ensuring that the production is not guilty of perpetuating the racism inherent in the play and it’s characters. This is a production that calls out racism, even in its most casual, implied form. Sarks thus brings into sharp relief the prejudice that still permeates our society today, half a millennium on. If Shakespeare’s play calls for empathy and mercy, Sark’s production begs for it.

The merchant Antonio’s scathing derision and cruel exclusion of the Jewish money-lender Shylock are nauseating to stomach in most productions of the play, and this production is no exception. There is a real tone of glee in Jo Turner’s delivery of Antonio’s incessant insults and abuses. Mitchell Butel’s Shylock initially meets this vicious scorn with measured restraint, which allows us to understand to some extent why he eventually snaps and releases his pent up rage. In the pivotal court room scene, Shylock is traditionally cast as a grotesque caricature of evil, hell bent on savagery. Butel’s Shylock is indeed malignant in this scene, however his total refusal to even consider clemency and his insistence on the payment of the bond are an almost relatable stand for principle, a grasp for some semblance of justice after all that he has suffered. The broken, stripped puddle of a man we’re left spectating at the end is certainly no cause for celebration.

What is often overlooked in other productions but which Sarks draws a focus on is that Shylock is not the only one persecuted for their race or creed. There is a casual racism in the pick-a-box game scenes with Portia’s suitors, one of whom is the butt of Portia’s jesting because of his ‘complexion’. Jessica Tovey (Portia) together with Catherine Davies (Nerissa) plays these light scenes with brilliant comedy, but somehow manages to deliver the racist jokes in such a way that they don’t seem that funny to us, but rather jar in our ears. Tovey’s Portia is intelligent, yes, she is strong, yes, but she is by no means flawless. It comes across quite clearly that she is a rich, white heiress, spoiled, at least to some extent, by privilege. 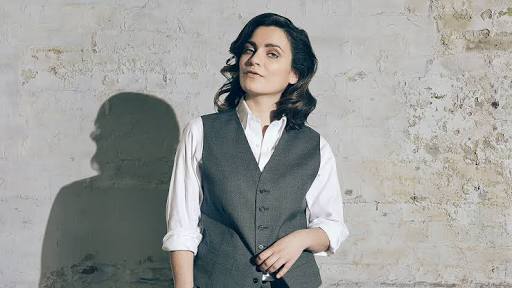 Tovey and Davies are an electric combination, the playful, natural interplay between them is one of the highlights of the show. Both women exude spark, wit and personality, injecting their performances with a delicious infusion of modern attitude, leaving us in no doubt as to who runs the world. However, they are also capable of the same cruelties as their male counterparts, scheming and deceiving, insulting and judging. In the courtroom scene, in lawyer garb, Tovey’s Portia issues the harsh decrees against Shylock with a distinct note of relish in her voice, indicating that she was enjoying the job a little too much – and this just moments after delivering her moving speech about “the quality of mercy”.

What is not easily explained in the narrative is the idea that anyone would be willing to go surety to a loan with their own flesh and then actually be willing to submit to the payment of that bond. Sarks’ offers a rationale for that anomaly by supplying a personal motivation on the part of Antonio: a warped display of unrequited love. Sarks accentuates a conspicuous homoeroticism to the nature of Antonio and Bassanio’s friendship throughout the play.

Sarks’ master stroke is the way that she treats the relationship between Shylock and his daughter Jessica (Felicity McKay). Jessica’s cavalier decision to leave her home and her faith, even robbing her father, is commonly painted as a lucky escape from a tyrannical parent. However, in this production, Jessica clearly struggles with mixed emotions. She desires acceptance into the Christian majority and yet feels shame at betraying her father and her culture. She is embarrassed at the monstrosity of her father’s implacability and the pain he causes her new husband and friends, but in the end is unable to rejoice in their victory with the knowledge of her father’s demise and the hand she had in bringing it about. It is an interesting directorial choice to close the entire action with a spotlight on the distraught Jessica, as if she were the conscience of this emotionally wrought play.

Another interesting choice is the simple set design, with a ring of benches edging the stage and open wings revealing rails of costumes. The cast are onstage throughout, even changing clothes in full view of the audience. The action takes place centre stage and those actors not involved sit on the side benches, facing either into or away from the centre, either passively observing or deliberately ignoring the unfolding action. In this way, all are in some form, to some extent, a party to the persecution and devastation that takes place. In the complexity of humanity, with all its ugliness laid bare, there is no clear idea of who is hero and who is villain. 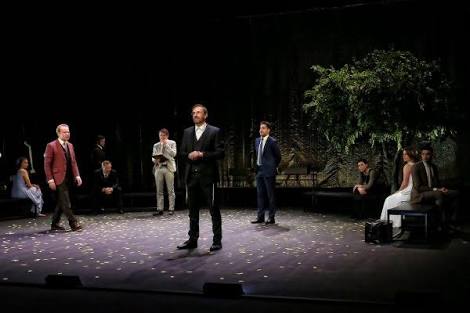 This is an insightful, nuanced reading of the play and a very assured staging, neither dodging, nor overplaying, nor rushing its point. The character list has been neatly edited to avoid confusion and unnecessary fluff, and every character left not on the cutting room floor is distinctly identifiable. The very real, very relevant issues of arbitrary hate and hypocrisy are wrestled, but without sacrificing comedy. There are many hilarious moments and clever little details to be enjoyed and appreciated.

– Alicia
Alicia Tripp is the Theatre Specialist for The Plus Ones, reviewing the premiere concerts, symphonies, operas, ballets and stage shows in Sydney. She is a seasoned arts and music critic, as a former journalist for the ABC Limelight magazine and State of the Arts. She has a degree in Media & Communications, English and Music from the University of Sydney.

The Merchant of Venice shows at the Playhouse, Sydney Opera House, until 26 November. Purchase tickets now. The venue is accessible.

Disclaimer: The Plus Ones were invited guests of Bell Shakespeare