It’s April in Sydney and now that April Fool’s Day is over, it’s out with the prankings and straight into the rankings of who you simply have to see at the Sydney Comedy Festival (24 April–21 May 2017).

Now in its 13th year, the producers have been working hard to bring us a huge selection of Australian and international artists and comedians. And they have delivered. The line-up this year packs more punch and controversy than a boozed-up brawl in King’s Cross.

From household names to new faces, it can be an overwhelming task to sift through all the names, reviews and shows to figure out which ones to go and spend your hard earned dollars (and laughs) on. To save you time and energy, The Plus Ones have done the hard work for you to present the top shows you really shouldn’t miss. You’re welcome.

Comedians against Humanity ft. Yianni Agisilaou (27–30 April)
Combining the classic drinking game Cards Against Humanity and stand-up comedy brings an interactive comedy special where guests can dictate their own show.

Break Out (19–20 May)
If you like being ahead of the crowd, supporting up-and-coming artists and seeing the newest, freshest standup in Sydney, then this show is not one to miss. 70 minutes of brand-new performers handpicked by the event organisers – and they know a thing or two about comedy.

Aaron Chen – The Infinite Faces of Chenny Baby (11–14 May)
Aaron Chen is young – but don’t hold that against him. He’s been performing in bars since before he was old enough to drink in them and he’s deservedly been getting a lot of attention. Don’t miss it.

Becky Lucas – Little Bitch (19–21 May)
Becky Lucas is one of Sydney’s most talked about up-and-coming performers. Despite the name, there’s nothing ‘little’ about her show, but she is definitely bitchin’.

Arj Barker – Organic (12–13 May)
Arj Barker will guaranteed have you in stitches. He’s funny, unexpected, and does a killer Aussie accent, mate.

Akmal – Transparent (19 May)
Covering everything from terrorism to reality TV, with Akmal side-splitting laughs are only a ticking time bomb away.

Jen Carnovale – Mess (10 & 12 May)
Jen Carnovale’s show will be like catching up with a completely inappropriate friend for bottomless brunch – intimate, personal, and you’ll be pissing yourself by the time it finishes.

Matt Okine – We Made You (13 May)
If you’ve ever listened to Matt Okine’s show on Triple J you know he’s funny. Off air he’s been touring the Sydney comedy scene and is back this year for a show that’s surprisingly relatable, considering it’s coming from someone who hangs out with celebrities for a day job. 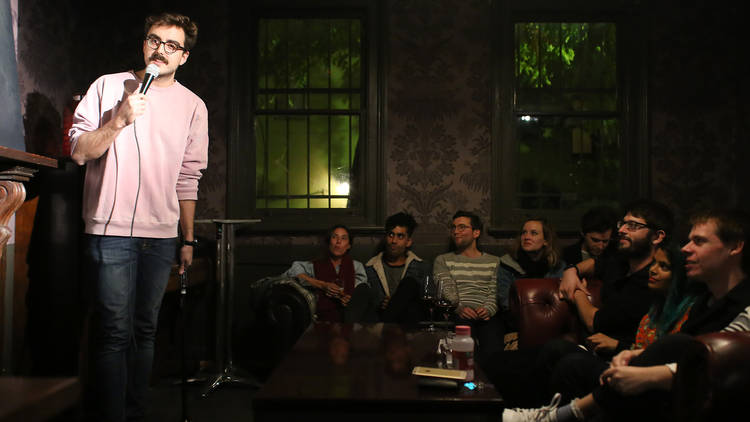 Romesh Ranganathan – Irrational (24–26 May)
In Australia from the U.K. for the first time, Romesh Ranganathan deserves a warm welcome. The self-professed ‘coconut’ talks everything from heritage to the terrible decision of having his third child.

Penny Greenhalgh – Pony Greenhorse (18, 20, 21 May)
Penny Greenhalgh is awkward, alternative and incredibly funny. For comedy that is ‘a little bit left of centre’, make sure you go and see her show.

There you have it! If this list doesn’t exhilarate you and get you wet in the seat for some comedy then maybe you shouldn’t be watching comedy at all.

– Elli
Elli de Ryckman de Betz loves reviewing comedy as it allows her to laugh and write. Writing about laughing, or things that make her laugh keep her laughing about writing.

Make sure you head to the Sydney Comedy Festival website immediately to buy your tickets before they sell out. Or have a look at the full program.