My thoughts will now be haunted by a new image of malevolence – the innocent yet sinister face of Kate Mulvaney as Shakespeare’s masterful villain, Richard the Third.

As is its’ want, Bell Shakespeare Company has again redefined The Bard’s tale in Artistic Director Peter Evan’s opening production for the 2017 season.

Mulvaney is spell-binding in the title role, as she beguiles and seduces the audience, along with the characters in the play, with her smooth words, mock humility and perverse logic. The unlikelihood of Richard’s ascension to the throne makes his hidden ambition and murderous intent unthinkable. Kate shares her wicked schemes with the audience and celebrates each blood-thirsty achievement with child-like glee. She portrays the distorted prince, both physically and psychologically, as a fellow victim of the tragedy that was The War of the Roses.

The genius of casting Kate in the title role is several fold. Not only is she a brilliant actress and orator, but having suffered spinal disability due to cancer treatment, she is able to empathise with the hated hunchback and more-readily display his mannerisms. Further, she redresses the Elizabethan practice of casting boys in the roles of women on the stage. So does Rose Riley who plays young Prince Edward, in addition to her substantive role of Lady Anne. As with Shakespeare’s historical plays – the themes of which have continuously repeated through the ages – the cycle has come full circle.

The production is set in a timeless sitting room, with characters remaining on-stage throughout the play – receding into the background and re-emerging as required, often in multiple roles, at a continuous cocktail party. The message comes through that the times, costumes, paraphernalia, names and faces change, but the relentless parade of aspirants, courtesans and sycophants has and will continue.

The entire cast are suited to their characters and act as effective foils for Kate’s inspired portrayal. The voices of strong female characters ring in the ears long after the play is over. Worthy of special mention is Sandy Gore as Queen Margaret, with her haunting and understated vitriolic curses and prophecies. Impressively, the cast are also trained singers, who break into rich, layered four-part harmony various times throughout the play. 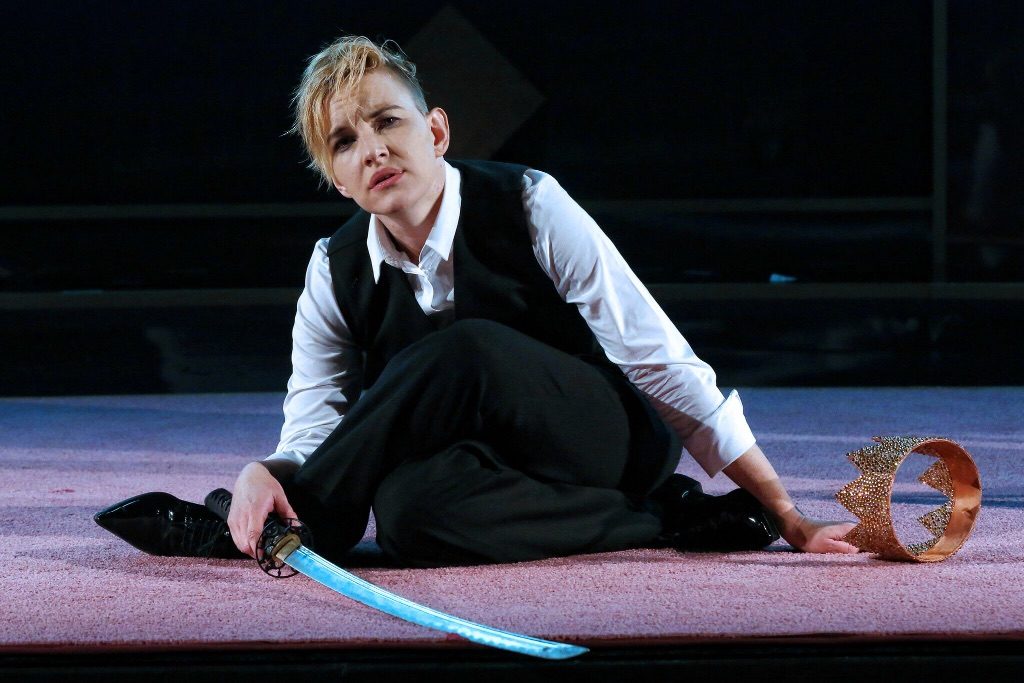 When Kate’s horseless Richard meets his demise at Bosworth Field, we could not help but feel remorse and pity for a twisted lonely wretch, rather than rejoice at the ultimate destruction of a ruthless monster.

Disclaimer: The Plus Ones were invited guests of Bell Shakespeare Company.
Image credit: Prudence Upton