The Twilight at Taronga summer concert series returns for another year after a series of successful runs. This year’s lineup has a distinct Australian feel to it, including the reunion of number of popular bands from the 1990s and early 2000s – Killing Heidi, George, Jet, and The Living End.

Before I get to the music, it’s worth saying something about the venue. If there is a better outdoor venue to see live music in Sydney, I’ve not seen it. Guests are greeted with a stunning backdrop comprised of the Opera House and the Harbour Bridge as they enter the intimate concert lawns.

The usual complaints one might have about outdoor concert venues simply don’t apply here. There is ample room to dance or simply lie down (numbers are capped at 2,000 each night). The facilities are neat, and you have access to a wide range of food and drinks. (There’s no BYO, but you can bring your own pre-packed picnic). Most importantly, the sound quality is excellent and not too loud as to disturb the animals. 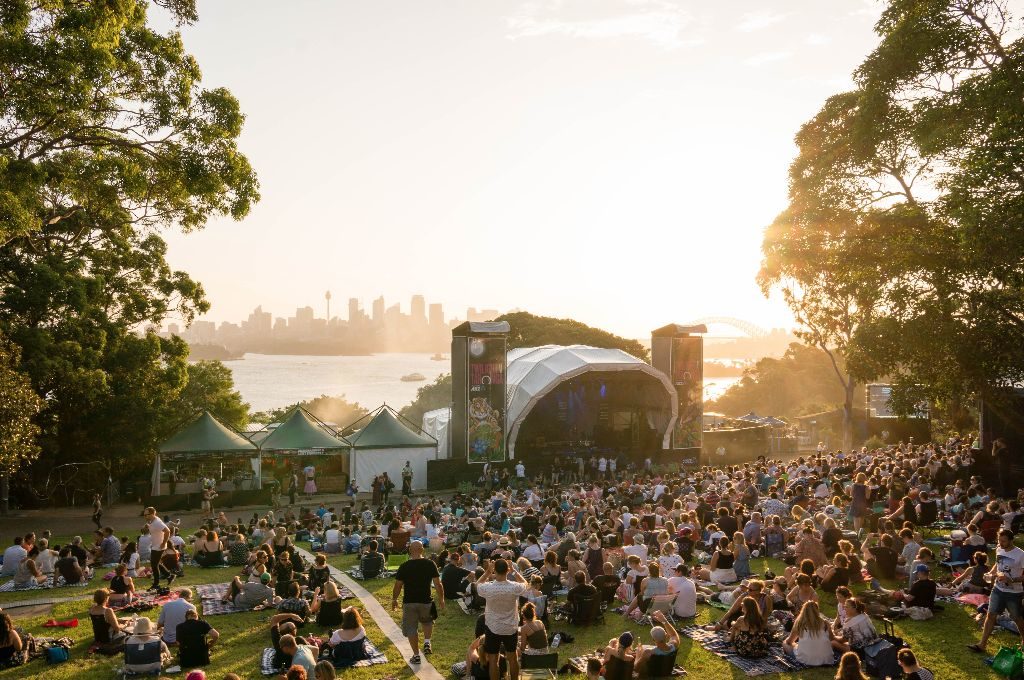 Singer-songwriter Abbe May opened the gig with a sultry set to get the crowd in the mood. I have not listened to much of her work since about 2010, but I was really impressed with her guitar work and was reminded how good that voice was. Be sure to check out her upcoming album Bitchcraft.

After a brief intermission, Killing Heidi hit the stage. Within the first couple of songs, a sizeable crowd descended to the front of the stage and were dancing away. Lead singer Ella Hooper appeared somewhat surprise by the reception, but appeared to draw inspiration from the enthusiastic response. She buzzed around the stage, while the band showed that they had lost nothing since the release of their seminal album, Reflector, some twenty years ago.

Their catalogue of songs received meditative and energising treatments, as was warranted, although Hooper did suggest that it felt weird to sing songs she had written in her teens. She went on to joke that she had no right to record a song about death at 16 and that perhaps should be left to Johnny Cash.

While others were dancing the night away, my plus one and I were happy to lie back and take in the surroundings and enjoy the music. Songs like ‘Weir’ and ‘Mascara’ were special to us in our youth and we lost ourselves in nostalgia hearing them again. Overall, it was a joyful and beautiful set.

If you are not sold on going yet, you should also be aware that a ticket to the concert also entitles you a free ferry ride to and from Circular Quay, and to visit the Zoo during the day. (Unfortunately, we did not take advantage of this).

There’s simply no excuse not to get on board and enjoy a summer’s evening in one of Sydney’s most beautiful outdoor areas at Twilight at Taronga. I will definitely be back for more.

– Khanh
Khanh grew up in Hoi An, a UNESCO Heritage listed village in Central Vietnam. He migrated with his family to Australia when he was 9. He has traveled extensively through Europe, South America and Asia. He is an academic, music lover, sports lover and a former table tennis (not ping-pong!) champion. Follow him  on @mr_khoang.

The Twilight at Taronga concert series runs until 11 March 2017 and tickets are still available for some shows.