Thirty prancing ‘horses’ will hit Sydney pavements this week as part of American performance artist Nick Cave’s first major project in Australia. The seminal work, titled HEARD·SYD, has been performed in Texas, New York and Detroit, with a few tweaks made for its Australian venues.

The live public performance at Pitt Street Mall this Thursday evening is sure to stop even the busiest of office-goers in their tracks. Two weekend performances will also take place at the atmospheric Carriageworks in Redfern on Saturday.

The Chicago-based artist Nick Cave is best known for his super-sized ‘soundsuits’. He is not to be confused with the Bad Seeds front-man of the same name – a mistake this writer must fess up to (and thanks her editor for the timely clarification). The spectacular suits combine art, fashion, dance and music and are inspired by both Tibetan and African influences. HEARD·SYD treats audiences to the spectacle of quivering, snorting and stomping equestrian play which at times becomes so intense that a stampede starts to feel likely. 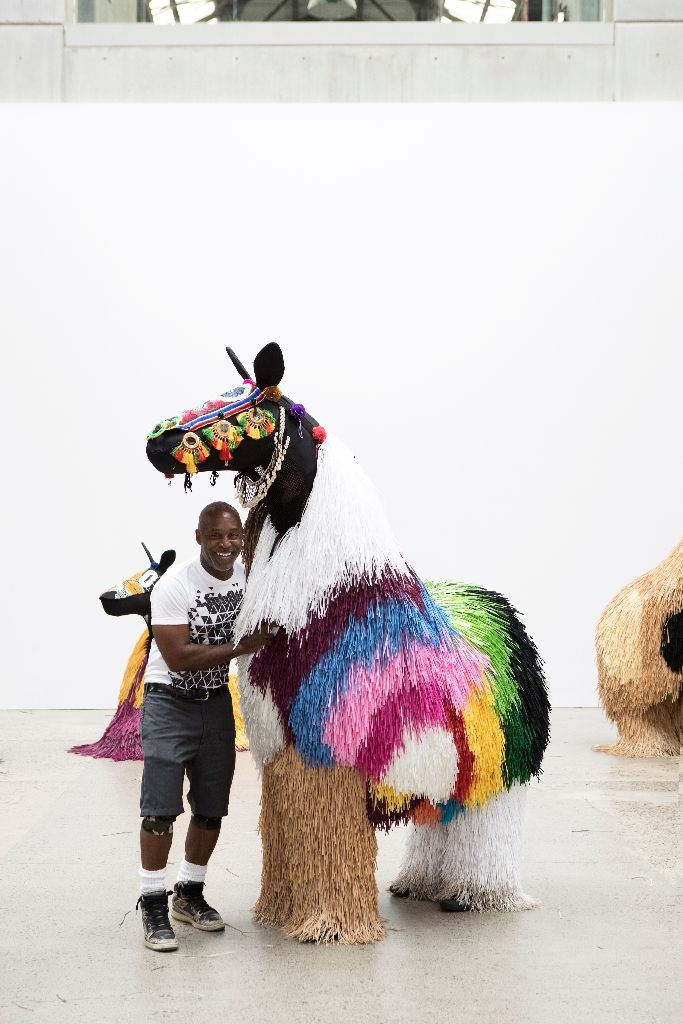 The suits are made of brightly coloured raffia and are occupied by two dancers at a time, with a style slightly reminiscent of a Chinese dragon. Each suit took three workers a month to sew and were shipped to Sydney from the States, Nick Cave told The Plus Ones.

The media was treated to a sneak preview of the performance at Carriageworks on Tuesday. It was also the first full dress rehearsal for the cast, which comprises 60 local dancers and eight percussionists from Matavai Cultural Arts Centre.

When asked how the rehearsal went, Mr Cave said, ‘It was fantastic. We’ve only been rehearsing for two days but it looks as though we’ve been rehearsing for a month. Dancers like them catch onto things within an hour. Now we’re just honing in on the details’.

HEARD·SYD will delight all ages, is free to the public, and supported by Carriageworks and the City of Sydney.

– Jessica
Jessica Mudditt is a journalist and blogger who recently returned to Australia after spending a decade away in the UK, Bangladesh and Myanmar. Follow her @JessicaMudditt.

HEARD·SYD will be performed Thursday 10 November, 5pm at Pitt St Mall, and Saturday 12 November (10am and 12 noon) at Carriageworks, 245 Wilson Street, Redfern.

Disclosure: The Plus Ones were invited guests of Articulate PR.
Photo credit: Zan Wimberley.

Japanese Film Festival: The Plus Ones’ guide to the best movies