If you’re a huge whisky fan, you’ll know of Auchentoshan. And you’ll also know how to say it. While I’m a fan of a wee dram, I’ll confess it took me a good few minutes after I arrived at the party before I said it properly. It’s ock-un-tosh-un. (Increase the difficulty and learn how to spell it in the original Scottish Gaelic: Achadh an t-Oisein.)

The Glaswegian brand hosted the Distilled Different competition. Bartenders around the country were asked to create cocktails using the single malt. The 12 finalists were treated to a photography shoot by one of three photographers that featured their entire bar team. As for the ultimate winner? They’d be flying to Glasgow for the ultimate Auchtenoshan experience. 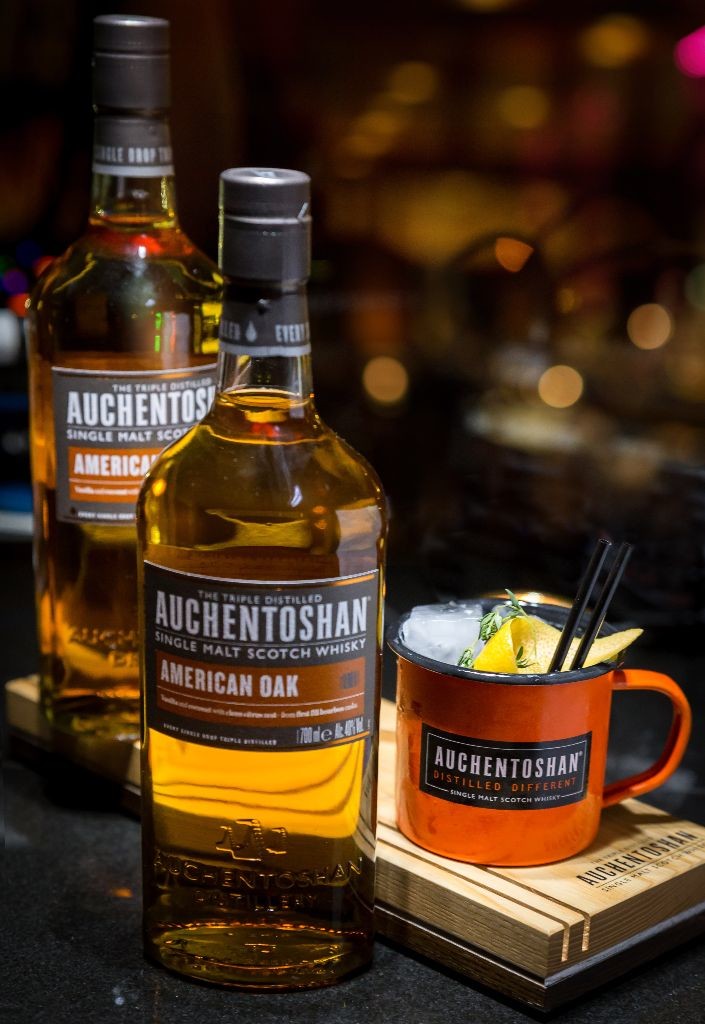 The twelve teams stretched across Australia, from WA to TAS — with the majority from Sydney. Della Hyde, Donny’s Bar, Stitch Bar, Doris and Beryl’s Bridge Club and Tea House, Ramblin’ Rascal Tavern, Eau de Vie Sydney, and Kittyhawk all came in the top 12.

The party was hosted at Gilt Lounge. Take an elevator inside QT Sydney hotel, walk through Gowings Bar & Grill, and head up the stairs. Inside it’s all lush curtains, lounges, and dark-dark-dark wood. Perfect for a whisky party. The photography portion of the competition was displayed on easels, showcasing the old-timey, black-and-white portraits of the bar staff. Each guest got a token so we could vote for the People’s Choice of the evening.

Along with moreish canapes, like arancini balls covered in grated cheese, we could try out four Auchtenoshan-based cocktails. There was the ‘Auchtentoshan & Ale’, which paired the whisky with Yenda‘s Pale Ale and a twist of lemon. Surprisingly refreshing.

Guests also sampled ‘A Different Thyme’, which matched Yenda Hell Ale with pink grapefruit juice and, yes, some thyme. The ‘Auch & Tonic’ was paired back, with just tonic and orange. And finally, you could sip a dram of the Auchtentoshan American Oak whisky neat or on the rocks.

But you’re wondering who won, right? The People’s Choice went to the Ramblin’ Rascal. And the EDV team will be heading to Glasgow. Now that’s a reason to raise a glass.

-Theresa
Co-founder of The Plus Ones, Theresa will never forget how to say ‘Auchentoshan’ (although she might have trouble spelling it).

Disclosure: The Plus Ones were invited guests of The Blend.
Image credit: Auchentoshan and Beam Suntory.

Sydney Craft Beer Week 2016 – The Plus Ones’ Guide