As a young band, it’s always audacious to try something completely new in front of an audience. You may gain more followers if it goes well, or risk losing some if it does not. On their latest national your, titled Midnight, the Paper Kites are taking such a gamble. On Thursday night at Enmore Theatre, it paid off, but not always in spades.

Promoting their latest concept album twelvefour — which was written entirely between the hours of midnight and 4am — the band have sought take the concept to stage as well. At Enmore Theatre on Thursday night, the stage was graced with four hanging window frames. Moving images were projected onto the frames with various scenarios depicted: a party with various people, a person smoking alone, a couple dancing and later fighting. The band essentially provides the soundtrack to the moving images.

The first half the gig began slowly with Sam Bentley and the band standing behind one microphone for the first few songs. When they transitioned to full-band mode, a fuller sound emerged. Particularly impressive was guitarist David Powys, who’s guitar work really stood out on tracks like Electric Indigo and Turn Within Me, Turns Without Me. My plus one and I were also in agreement that vocalist Christina Lacy’s voice was underutilised, and both of us would have loved to hear her really let loose. 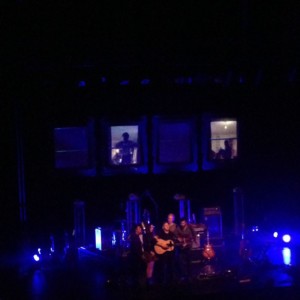 The concept of the windows worked well for the most part and one couldn’t feel a bit voyeuristic (in a good way). One thing I would have preferred was a clearer narrative of the moving images through the windows. But that was a minor gripe for what was otherwise a very different and enjoyable gig.

The Paper Kites are touring nationally in June.

Disclosure: The Plus Ones were invited guests.