As the Sydney Opera House continues to expand its Talk and Ideas program, the All About Women festival has firmly entrenched itself as one of the flagship offerings. Now in its fourth year, the festival aims ‘includes talks and debates on ideas that matter to women and provides an important platform for women’s voices’.

This year’s festival took place on Sunday 6 March. The headline acts included Piper Kerman (whose time in prison was the basis for the Netflix show Orange is the New Black), filmmaker and writer Miranda July, and academic and foreign policy analyst Anne-Marie Slaughter, amongst others.

While the festival addresses many contemporary issues of importance to women, it is worth noting these issues also affect men. In this respect, I was quite saddened to see that I was among only a handful of men who attended at the festival. One the plus side, there was no need to queue for the toilet.

I attended two talks. First up was Kerry Carrington who spoke about ‘Women and Violence’. If you missed our interview with Kerry last week, it is worth a read because much of the substance of her talk is her covered there. In short, she addressed the important issue of family violence citing the need for a new approach to the problem: we need to move away from post-assault solutions towards preventative measures. Such innovations, in her view, must include wide-ranging community involvement and education as well as innovations to policing such as ‘women only police stations’. Such innovations have been implemented with success in other jurisdictions and she argues that they should be implemented in Australia.

She also highlighted the desperate need to reform the prison system to better cater for women. Australian prisons are seeing massive increase in female populations, while policy has not kept up with the problem. She argues that more Australian women —especially those on the margins —are being pushed into prisons for ‘petty crimes’. While this allows the politicians to trumpet that they are getting tough on crimes, it creates prisons that are failing women.

This was followed on Anne-Marie Slaughter’s talk titled ‘Unfinished Business’, in which she attempted to answer the question of whether women can ‘have it all’ in respect of having a family and a career? Further, she questions what, if any, role can men play in bringing that into fruition? This is the ‘unfinished business’ of achieving true gender equality. 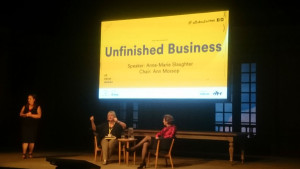 Slaughter’s central thesis was this: we have to revalue ‘care’ as a central part of who are as human beings, and recognise that it is of utmost value to the family unit and to society as a whole. The notion, that ‘care’ is solely a woman’s role and breadwinning is a man’s role, only serves to further entrench gender inequality. Just as society needs, and should value the care that women provide to their children, friends, and family members, so too should we applaud and expect men to do the same.

Central to this cultural shift is the way we use language. For example, instead of using the term ‘stay at home dad’, she prefers the term ‘lead parent’. Further, we need to ask real questions of each other: ‘if I get a promotion, will you move for me? Will you defer your promotion for mine’? We need to start educating young men to think about how they will balance work and family.

More broadly, we need to create societal infrastructure that values care: paid family leave (for both sexes) and leave to care for elders and children. We need to frame workplace laws not as ‘women’s issues’, but to think of restructuring workplaces so that both men and women can work more productively, given their care responsibilities. 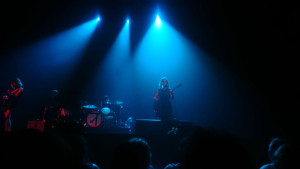 To round out the day, a friend of mine had a spare ticket to Sleater Kinney. The punk/grunge act, who ‘first came to Australia 22 years ago with nothing but a bunch of backpacks’ rocked the concert hall to its foundations. By the halfway mark of the gig, many sections were up and dancing while others had simply spilled into the aisles. Powerful, masterful, and downright joyful, the show was the perfect bookend for the festival.I walked away a converted fan.

With ideas and solutions like these, there is cause for optimism that perhaps women can have it all. And that is not a bad thing.

10 Clubs to Join in Sydney