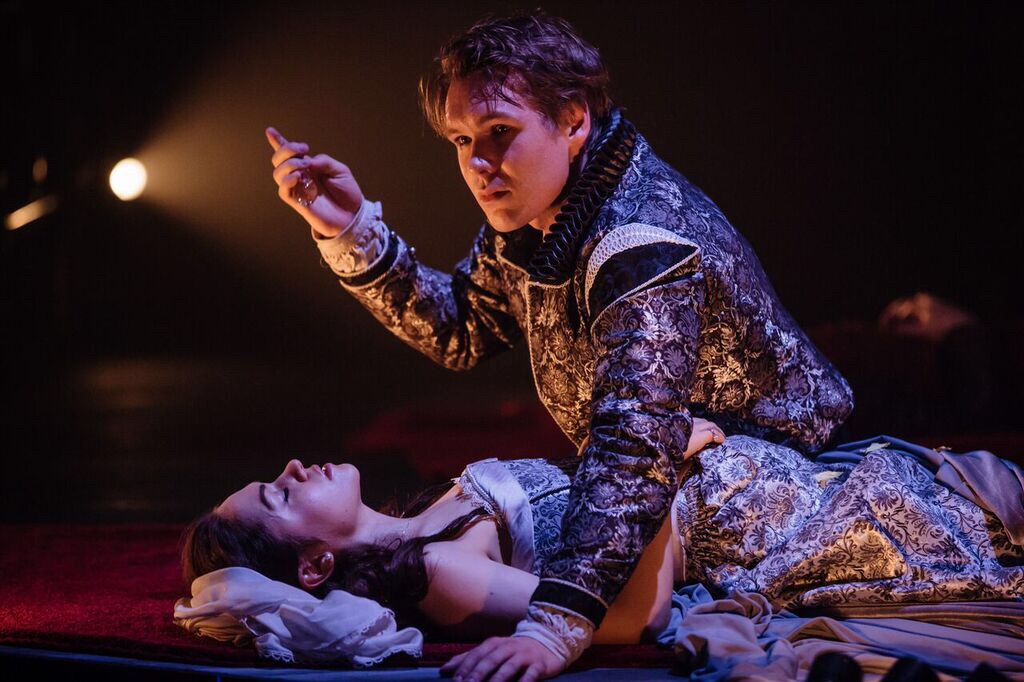 What a triumph of firsts! The energy in the Playhouse on opening night, 24 February, was electric, the thoroughly engaged audience making it evident by their laughter, cheering and applause that the premiere was a resounding success.

No one needs to be introduced to the plot of Romeo and Juliet – we all know that ‘two star-crossed lovers take their lives’. As one writer put it, we know this as well as we know the first four notes of Beethoven’s Fifth. Given that, a performance that sucks you in so deeply that you almost forget the unforgettable, un-know what you intrinsically know, and feel and experience something so archetypal for what seems to be the first time – that is special. That’s a first.

And that is exactly what this new production does. Shakespeare’s masterful storytelling is played out with such suspense and such truth that you find yourself willing the friar to hurry up and get to the Capulet tomb before Romeo, even though you know full well that he cannot, and until the last moment when Romeo is about to drink the vial of poison, you chant inwardly, ‘wake up Juliet, wake up’, despite knowing the inevitable result.

Just how this incredible feat is achieved I am not sure. It has something to do with Shakespeare’s genius, certainly, but it is more than that. Not every production of the Bard has this effect on me, managing to get the psychological mastery over my pre-knowledge, making me hope anew and feel the full weight of the tragedy with shock.

Perhaps it’s the period costumes that did the trick for me. I can’t remember the last time I saw a Shakespeare play that had not been re-set in modern times. The ideology of Bell Shakespeare Company for the last quarter century has been to breathe life into these 400-year-old plays and make them applicable for new generations. This has generally meant steering away from accurate historical reconstructions. In this production, Anna Cordingly’s opulent 17th century capes, boots, bustles and hoops signify a departure from what we have come to expect from Bell Shakespeare. Whilst I appreciate the clean focus that simple black T-shirts draw on the text and the acting, the costumes in this production bring another dimension into play. They don’t just have a traditionalist appeal of authenticity or add to the theatricality of the drama, but they actually assist in transporting the audience to another world – the world of Shakespeare’s time, which is to a modern audience so foreign, so removed, so romantic, that one is willing to abandon present realities and knowledge and follow the white rabbit down the hole. In that state of abandonment, of escapist pleasure, the passion and violence of the world Romeo and Juliet inhabit and the ridiculous happenings of those four intense days which see two adolescents meet, fall in love, get engaged, get married, commit murder and suicide, all make sense. 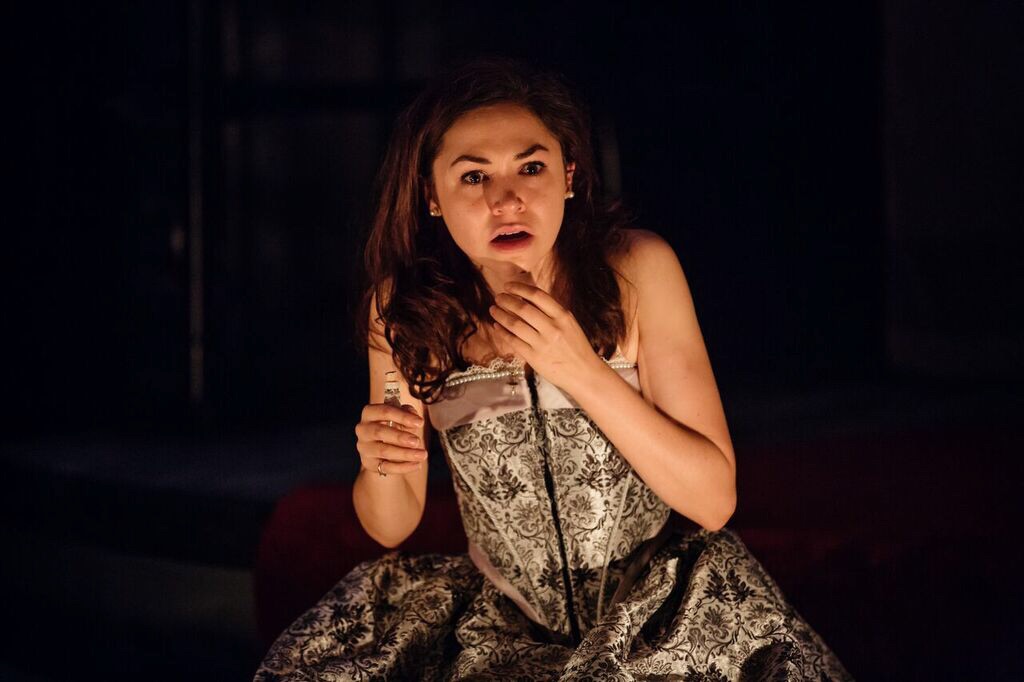 Perhaps my complete immersion in the play can be explained by something as simple as the choice of cast. It is always difficult to believe a story of teenage love – Juliet was not yet 14 – when the actors are all middle-aged. But here we have a fresh-faced Romeo and a girly Juliet who could very well pass as adolescents. Alex Williams is just 25 years old and with his teen-idol blonde hair falling over his blue eyes, he barely looks that. Kelly Paterniti is 28 but you would swear she was half that – with her petite frame, she is a mere child surrounded by adults, standing amongst the other actors. The roles of Juliet’s cousin Tybalt, Romeo’s friends Benvolio and Mercutio, as well as Juliet’s arranged groom Paris, are also played by young actors, mostly recent graduates. The youthful appearance, energy and intensity that Tom Stokes, Damien Strouthos and Jacob Warner bring to their roles, scaling the ceiling-high scaffolding of the set, jumping and chasing, tearing down curtains and brandishing swords, makes their crude jokes and impulsive aggression more believable, as they can be seen as youths, not long out of the naughty boy stage, who have not yet learned to be men in control of their passions. 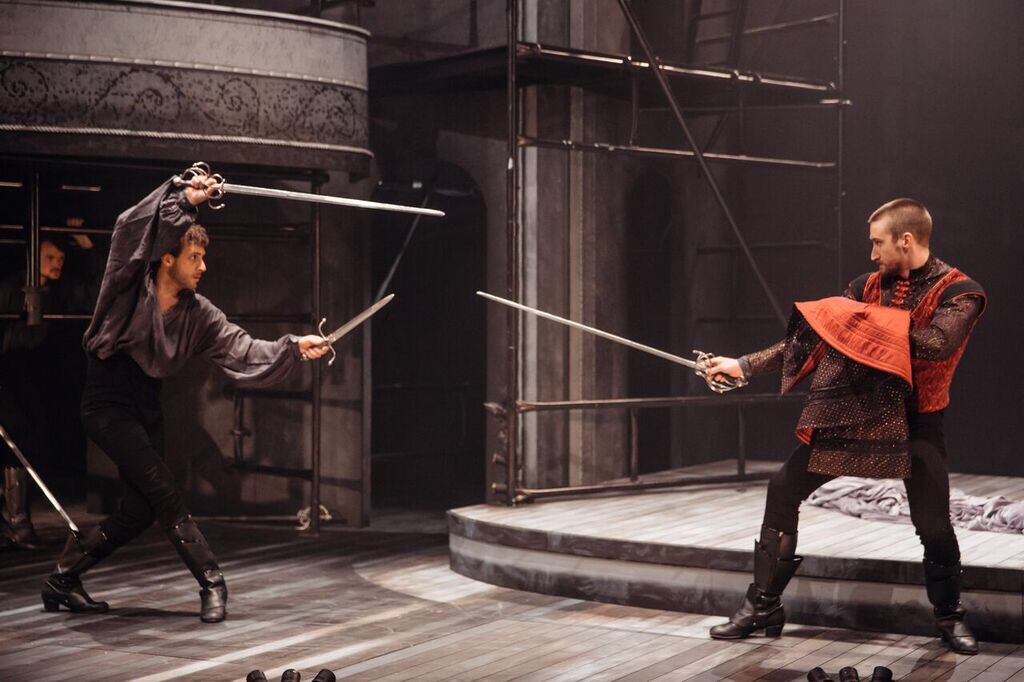 I usually have one or two stand-out actors who I can pick from the group and rave about, but in this case, the standard is so high across the board, with not a weak link amongst them, that it is really impossible to do that. The two young principals, Williams and Paterniti, do not falter, delivering their lines with naturalness and feeling, accompanied by subtlety of facial expression and gesture. They give impressive performances, but they are so well supported by the rest of the cast that no one individual overshadows the ‘ensemble’, which is the word Director Peter Evans used multiple times in his speech at the post-show celebration. This ‘ensemble’ feel that he was aiming for definitely comes through. In fact, even before hearing Evan’s speech, I had jotted down that exact word to use in my review. The cast is tight-knit and secure, bouncing off each other beautifully, setting off each one to shine in his own right, in order for the group to shine more brilliantly together in a cluster. The ensemble nature of the production is further achieved by Nigel Poulton’s choreography, which is almost dance-like in the movement patterns that the bodies make and the constant placement and replacement of lanterns in artistic position on stage. Rarely do the actors simply walk, but they sashay or slide or slink or spring or sprint. The soliloquy asides are handled particularly effectively, with the other onstage actors frozen in interesting shapes, there but not there. Kelly Ryall’s unique soundtrack, which is at times atmospheric, at times intrusive, ranging from a pulsing heartbeat to Gregorian chant, ties the whole work together and contributes greatly, albeit perhaps unnoticeably, to the fully immersive sensual experience.

Each actor imbues their individual role (or roles, as some play multiple characters) with personality, colour, depth and pathos. So much so that even the parents of Juliet, who are typically portrayed as tyrannical and cold, can be understood as just overly protective or even overly adoring. Angie Milliken, who plays Lady Capulet, explains that her character is “not a bad mother – she just loves her daughter so much.” Incidentally, in what surely must be another first, Milliken literally ‘broke a leg’ before the opening night and acted the whole two and a half hours with a cast under her hoop skirt. Her pain and limp were imperceptible throughout. She will courageously continue to do this for the rest of the season. Mention must also be made of Michelle Doake, who all but steals the show with the comedy she brings to the role of Juliet’s nurse, which is so often deadpan and sidelined. She has the audience laughing out loud, which is not expected in a Shakespearean tragedy, but she finds the humour in the lines and in her character and highlights these to great effect. She seems to channel Miss Bates from Jane Austen’s Emma or Mrs Bennet from Pride and Prejudice in her endless, uneducated but good-natured chatter, not to mention her swooning. 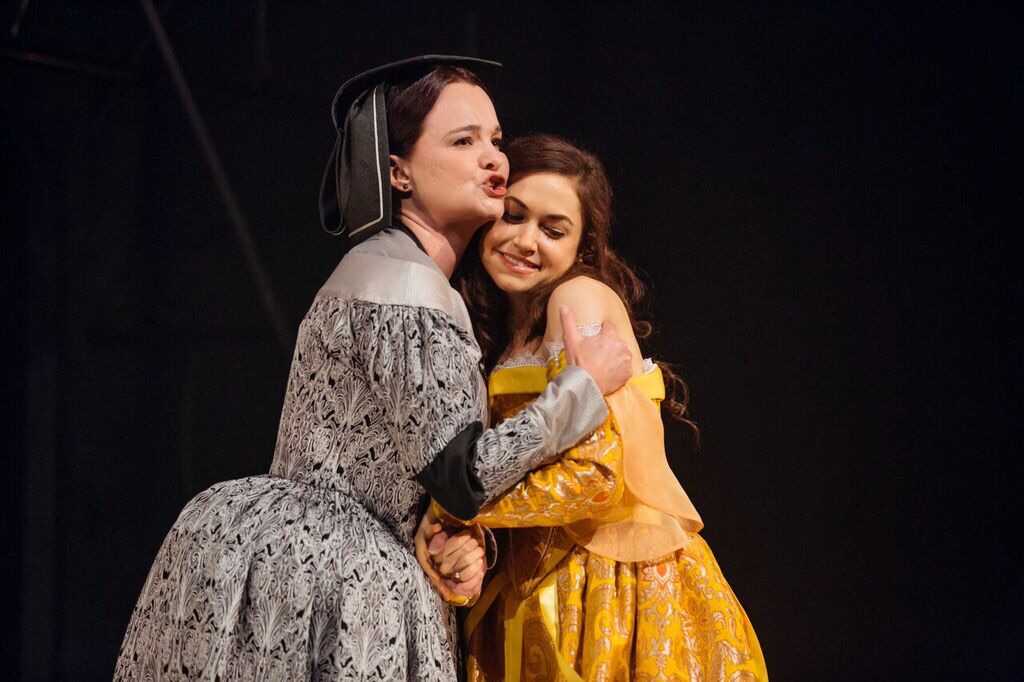 2016 marks 400 years since Shakespeare’s death, and what better way to open the milestone season than with a traditional setting of one of his most loved plays. The killer combination of comedy, romance and tragedy, with the never-fail ingredients of sex and violence, makes Romeo and Juliet as appealing today as it was when it was written. This fresh, young, joyous and intense production is showing at the Playhouse, Sydney Opera House, until 27 March.
– Alicia Tripp

Alicia is the Theatre Specialist for The Plus Ones, reviewing the premiere concerts, symphonies, operas, ballets and stage shows in Sydney. She is a seasoned arts and music critic, as a former journalist for the ABC Limelight magazine and State of the Arts. She has a degree in Media & Communications, English and Music from the University of Sydney.
Disclaimer: The Plus Ones were invited guests of Bell Shakespeare Company