This is a poignant story about two of Australia’s iconic literary figures: Henry Lawson and Mary Gilmore. This is a story about a love not lost but suppressed.

Still revered across Australia, Henry Lawson is one of the nation’s favourite writers and poets. His contemporary, Mary Gilmore, was a literary icon and radical socialist who delved into the notions and ideals of feminism. Both had enormous influence over each other. Both were heroes of literature. Both were later the face of Australian currency. Both were secretly betrothed to each other.

At the urging of his mother, the suffragette Louise Lawson, Henry becomes a guide to the young Mary Gilmore, who arrives in Sydney from the country. What follows is a friendship destined for love but is thwarted by deception. The theft of their love letters by Henry’s mother is not revealed until years to come, by which time their lives have moved in spate directions. However, the love still bounding the two together is ever present and is the essence of this story.

This play is hardly a glorified flashback. Rather, monologues, excerpts from their recorded letters, and full-fleshed scenes, gives the play dimension and a structure that isn’t a mundane re-telling of a story. A single bar of music introduces the reciting of poetry, which speaks to the ingenuity of playwright Anne Brooksbank and composer Jack Ellis. The simple, yet effective use of Mary’s poetry acts as a sub-text to the narrative and gives the audience a window into the intense emotion- albeit often suppressed- that plagues the lovers. 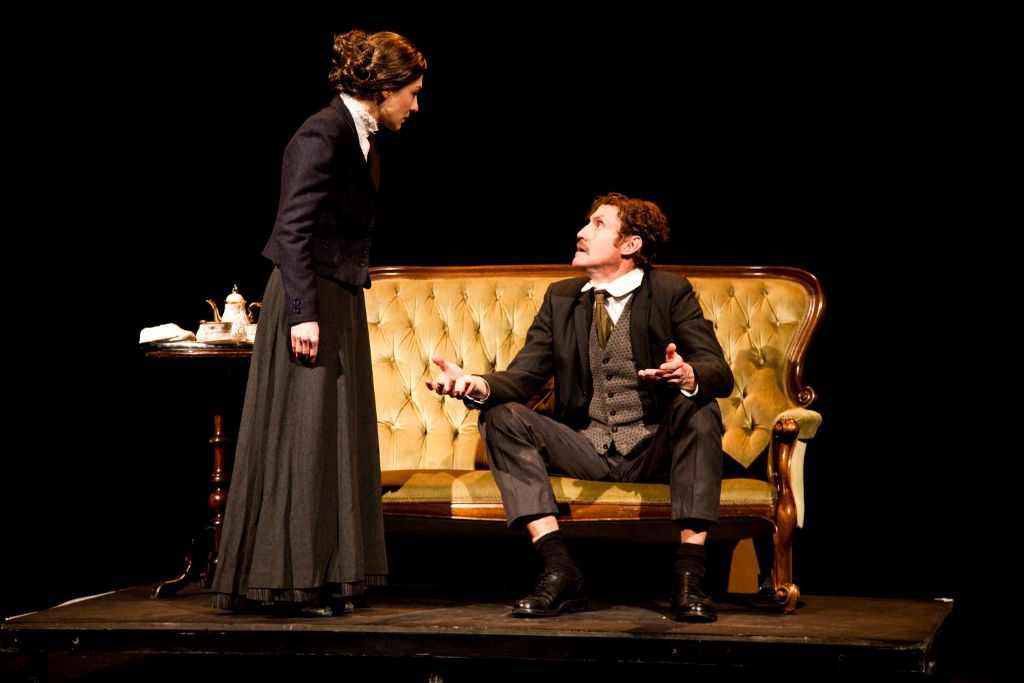 Only the weak complain,

Cover thy wound, fold down

Silence is still a crown,

It’s the combination of deep-seated love with the verbal frisson of two articulate people that creates a highly evocative work. Director, Denny Lawrence describes the play as “very theatrical in the best sense.”

The play is quite evocative. Is it Theatrical? Not so much. The dimly lit stage creates a haze of sentimentality and reveals a minimalist set, comprising of a tea set, side table, a two-seater mustard sofa, two chairs, and a makeshift table. The audience has to envisage the complete scene, which is only aided by the incremental use of projected images at the back of the stage.

The set, however, does create a quaint base for this period piece. It also does well not to distract from the narrative being presented by the two protagonists. Both Dion Mills (Henry Lawson) and Kim Denman (Mary Gilmore) are to be commended. The chemistry and tension between the two characters is flawless. A real sense of longing is recognisable and leads to an empathetic response to the point of audience involvement. Mary writes, “P.S I’m not married” which is followed by laughter. Henry writes: “I’m married now” a sentence that induces audible gasps and oh’s from the audience.  On a whole, both actors use the simple moments of joy and comedy to brighten up the narrative. Seen in Mary’s hatred for Henry’s mother, and Henry’s unabashed ogle of Mary’s ankle.

Mary Gilmore, often urges Henry to “not care what people think.” This is strangely paradoxical. She decides to conform to social norms and it is disheartening. Her unshakeable loyalty to a man she still loves (henry) is rather tiresome. Kim Denman does well to present a woman torn by societal views of what is proper and her efforts as a woman in a male-dominated world. The one line blunder is overlooked because her raw emotion is refreshing and enthralling.

However, Dion Mills portrayal of Henry Lawson steals the show. His bouts of wit, rugged manliness, and sentiments of love make Henry a charismatic yet ordinarily flawed man.. An unfolded collar paired with a poorly arranged tie and a neurotic scrunching of his hat speaks volumes. His disheveled posturing is indicative of a turbulent past, his toxic relationship with his mother, and his battle with alcoholism.

All My Love is just that- absolute love between two individuals. Unquenchable. Undying. It is agonising to watch two people intrinsically bound and remain apart. Their fervent love reduced to “all that has been.”

A romantic escape to The Rockies