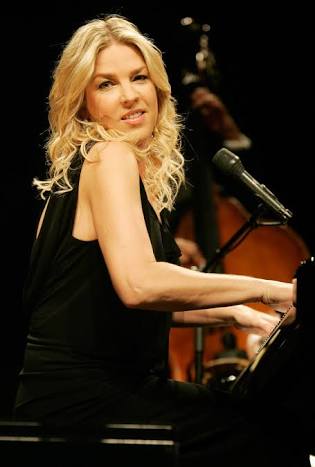 I have a confession to make. A disclaimer. I am a jazz enthusiast, a piano player and a Diana Krall fan from way back. So, heads up that a teeny touch of bias may have managed to seep it’s way into my hard-hitting professional journalism below.

Diana Krall performing on the Steinway grand of the Concert Hall of Sydney Opera House, together with her five-piece jazz band and the Sydney Symphony Orchestra rates as one of my top five mind-blowing concerts – and I attend at least a show a week.

The five-time Grammy Award winning jazz pianist and world-renowned singer is touring Australia as part of her Wallflower World Tour, in support of her latest album (her twelfth release), the ARIA Jazz Chart #1 Wallflower. Having sold more than 15 million albums worldwide, Krall is the only jazz singer to have eight albums debut at the top of the Billboard Jazz Albums chart.

In the show, Krall breaks new ground with her interpretations of some of the greatest pop songs of all time as well as favourites from her extensive catalogue, stamping her personality on songs that everyone knows well. She holds back from flooding the audience with a forced overdose of her latest releases or original material, and instead delivers crowd-pleasing, sing-along standards, one after the other, but each in a fresh way and in a crazy, random order. The arrangements, which include orchestration by the SSO’s conductor Chris Walden, are unique and expressive and the selection is diverse in taste. There are moments when the whole orchestra, band and Krall play together, moments of Krall and her jazz band without the orchestra, moments of Krall and the orchestra without her band, and moments of just Krall and the piano.

Whilst it’s hard to go past a good Beatles, Eagles or Crowded House number, the highlight for me is the epic twelve-minute rendition of Tom Waits’ ‘Temptation’, in which Krall and each of her band members lose themselves in extended free-form solo improvisations. Indeed, as every good jazz musician does, they improvise all night, in every song, and it’s obvious from the expressions on their faces and the interaction with each other that quite often they surprise and delight each other by playing unexpected things that they clearly did not play in rehearsals. They’re just jamming, and as they do so, the songs morph ever so fluidly into different lifeforms each time the lead passes hands. Krall tells us, half-jokingly I’m sure, that she gets mesmerised by the music her fellow band members and the SSO are making that she forgets she’s on stage, becomes a member of the audience and misses her cue. Watching and listening to them, it is easy to imagine that truly happening, as the incredible talent on show is indeed mesmerising. Special mention must be made of the fabulous Anthony Wilson on guitar, and crowd-favourite – drawing the most applause, cheers and whistles – the energetic Stuart Duncan on fiddle. Those two musicians could fill the Concert Hall on their own.

Krall plays the piano with such soul. The music is inside her and bursts out of every fibre of her being. The sound she produces is so funky, so dirty, so edgy, and whether she’s driving the bassline with her powerful left-hand, or showering the crystalline top-most treble keys, it contrasts brilliantly to her smoky, sultry alto vocals, which sit lazily around the middle-register. Krall herself says that her voice has been “scotch-infused” since she was twelve years old and her inability to hit the high notes prevented her from being accepted into the school choir as a child.

Despite telling the crowd several times throughout the night that chit-chat is not what she does best, Krall opens up in a shy, honest way, revealing little snippets of touching stories about her dad’s record collection, her intimate friendship with late great Nat King Cole and Oscar Peterson, as well as her husband Elvis Costello and their two children, who are in the audience. Her speaking voice is so different to her singing voice. The pitch still hangs low, but the tone is shiftier, breathier, with a lot less confidence and strength, betraying a personality that seems to be quite eccentric, like a true artist. It’s easy to fall in love with the blonde Canadian, actually, when you spend a night with her. And, having said that, I should mention that she still looks damn hot at 51 years old! 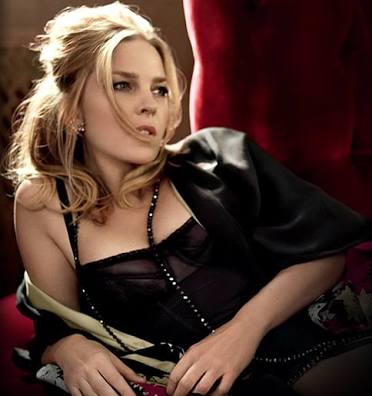 A fourth and final show of Diana Krall with the Sydney Symphony Orchestra has recently been announced for Saturday night, 30 January 2016, at Sydney Opera House.

Alicia is the Theatre Specialist for The Plus Ones, reviewing the premiere concerts, operas ballets and stage shows in Sydney. She is a seasoned arts and music critic, as a former journalist for the ABC Limelight magazine and State of the Arts. She has a degree in Media & Communications, English and Music from the University of Sydney.
Disclaimer: The Plus Ones were invited guests of Sydney Symphony Orchestra