A tale of tasteful brutality and perplexing romance.

Those that are familiar with Guillermo del Toro’s work will inevitably know him as a master of fantasy, monsters and production design. Most notably he directed the Oscar-winning-feature Pan’s Labyrinth, an extraordinary piece of cinema that demonstrated del Toro’s proficiency at varnishing his work yet maintaining the depth of the writing.

Crimson Peak, del Toro’s newest creation features Mia Wasikowska as Edith Cushing, an aspiring author who, through a series of misfortunes marries Thomas Sharpe (Tom Hiddleston) and moves in with him to an isolated house where the Sharpe family had dwelled for centuries. After encountering the other resident of the house Lucille Sharpe (Jessica Chastain), sister of Thomas she began to sense strange things in the house, things that she had seen before as a child, things that seem to be warning her….

When a director aims to create a visual atmosphere of great beauty, one cannot help but to invest a certain amount of detail into the scenes, building up tones or themes in certain sections of the film. The house in which the three characters dwell has a certain vibrancy of colours, yet they remain unobtrusive to the eye, rather than forcing these tones onto us del Toro has chosen to use them subtly with an underlying sense of danger hidden beneath. In clear contrast, Edith’s home town was established to possess a filtered ‘stain’ of rust orange, perhaps to suggest the tedious nature of her life in America, in turn diverting us towards the impression that Cushing was genuinely pleased to be married to Sharpe.

In a similar nature, the costume is also delicately made and chosen with careful consideration, this could be seen at times when Edith wears her earthly gold/neutral whites, while the Sharpes usually wear darker colours consisting of naval silks or blacks, the notable exception to this pattern is when blood is required in the scene and white fabrics are worn to emphasize the scarlet colour.

Regarding the musical aspect, its conventional string performances highlight the intensity of the climaxing plot in act 3, as well as use rather heavy but subtle parts to enhance the horror elements of the film. And though at times the score may seem distracting, it overall supplements agreeably with the screen.

Opening with a prologue centred around Edith Cushing in her childhood, the film reveals the cause of her fascination with ghosts and the supernatural as Doug Jones makes his apt entrance as a CGI-altered model, hovering ominously close to Edith and sending seeds of nightmare and a message that would become a repeating motif.

Act 1 swiftly develops the central characters, as well as maintaining memorable entrances by the Sharpes sporting a set of impeccably tailored suit and a crimson red dress. Cushing’s novel adequately foreshadows the gothic romance of the film, which also ties in the storyline itself as herself becomes an author who fail to accomplish her dreams. This stage of the film becomes somewhat slow-paced towards the end, and could have used some more development with Charlie Hunnam’s character as he becomes a much valued personnel in act 3.

As romance blooms between Sharpe and Cushing, we gradually move into the second act which takes place majorly in the gorgeously designed set- crimson peak itself. However the romantic relationship between Edith and Thomas never seemed quite genuine until the very end, which may just be the manipulative disposition of del Toro hoping to hide the few twists that lie in the overall predictable story.

The plot makes its change of locale from America to England, where a gripping series of horror and twisted devotion awaits at crimson peak. Though still slow-paced, the second act grabs hold of much of our interest, with mysteries complemented by the delicate beauty of the structure that encapsulate these secrecies. However at times it does lose tension and murders the suspense. 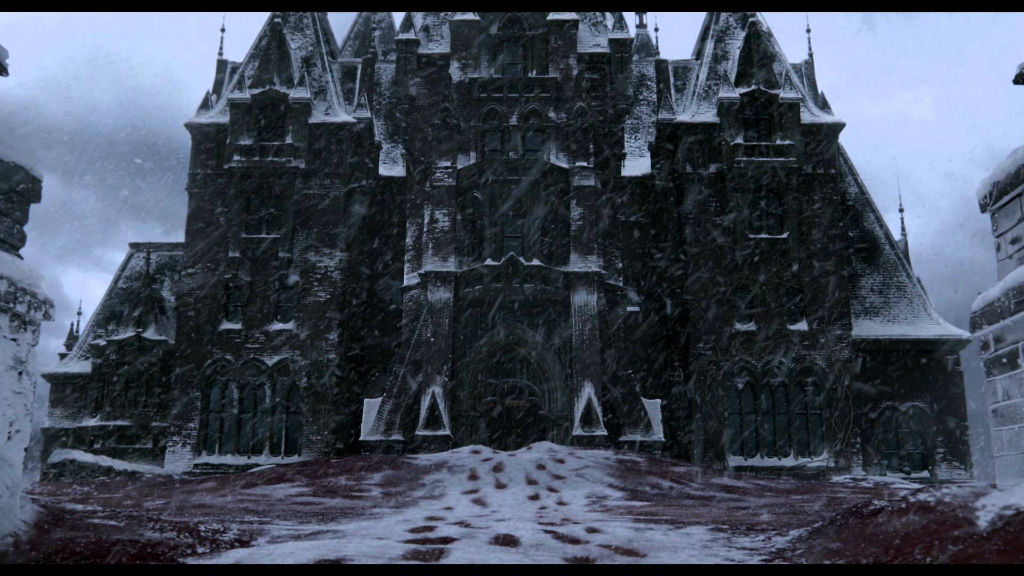 The end of act 2 makes for a great push into the resolution stage. As Edith becomes conscious of what may lie within the house she began to take actions which drives the plot with tremendous intensity and edge. At this point the regular appearances of the point fade scene transit has become a recurring motif, encompassing the not-so-cartoonish happenings that are to take place.

A particular highlight in the last half hour of the film is none other than Lady Lucille Sharpe, played by Chastain who perfectly embodies the character of a rather creepy sister that would later on turn to an escalating parade of madness, unsettling the audiences as well as Edith. Contrasting the first half of the third act, near the very end the intensity soars unexpectedly above the threshold of the gothic romance/horror genre…

…as the perplexing relationship between the Sharpes were revealed, proving to be much more dramatic and horrifically appealing than that of Edith and Thomas. And though it may not seem so, Thomas’ death was the only demise after the murder of Edith’s father, as the blade penetrates his cheek a tear of blood drips down from his blood-shot eye, yet is it of anger as his sister becomes this creature of obscenity or for mourning that he shall never see Edith again? All we were given to answer the question is the visual poetry of death sung in the lifeless room. Appearing only for a brief moment at the end, his ghost too was of excellent design.

Benedict Cumberbatch was originally cast in the role of Thomas Sharpe, however had to drop out and was replaced with Tom Hiddleston, one could not help but wonder if Cumberbatch would have been more suitable to the role.

‘Parasite with a title’ was a lovely play on words that was used to describe the character, and in that context Hiddleston does have a certain playfulness similar to the characteristics of an aristocrat of no trade. However it does seem more appropriate for Cumberbatch to be the mysterious stranger, particularly as his deeper voice may better demonstrate intimidation, yet simultaneously losing the quintessential quality of fragility of his character.

Both are exceptional actors, and I’ve no doubt that though their versions may vary in its focus, Thomas Sharpe would still have been the dashingly odd mystery with the humane insecurity that we witnessed.

The charming cinematography brings view to the equally pleasing set designs, of both crimson peak and Edith’s home where a well developed family relationship came to its ghastly end. CGI at times does look a bit stingy, but the smooth movement of the hovering camera and the well-edited scenes were more than enough to cover for it.

Overall Crimson Peak was a masterfully designed gothic romance, of extraordinary beauty. Though not especially memorable it still accomplishes with proficiency what it sets out to do.

In theatres everywhere from 15th of October 2015 in Australia