As the Sydney Theatre Company’s latest production of Bernard Shaw’s Arms and the Man commences, we see into a luxurious, candelabra-lit Victorian bedroom suite, complete with balcony fit for a ‘wherefore-art-thou-Romeo’ scene. There are hoop skirts and bustles, bonnets and parasols, uniforms and sabres. There is a beautiful young lady and at least one very dashing officer. And of course, there are English accents. Are these not all the ingredients essential to a good period-romance? 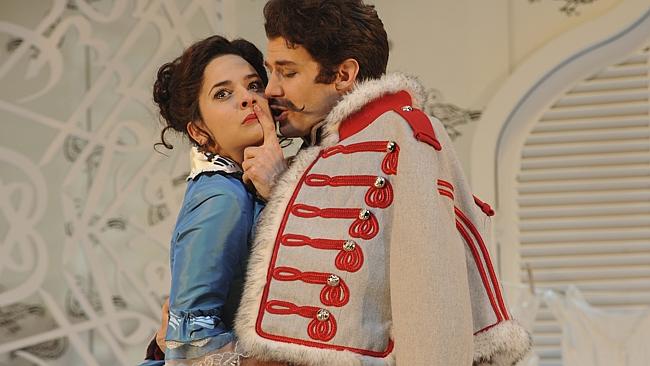 But anyone in the audience savvy enough to know that the playwright Bernard Shaw was a socialist, pacifist, teetotaller and vegetarian, married to a feminist – would know to expect that the audience was being set up by all this fairytale regalia.

When Arms And The Man first premiered in 1894, the then Prince of Wales (later King Edward VII) was heard to mutter regarding Shaw, as he left the theatre, “The man is mad. The man is mad.”

Victorian theatre goers well knew, as do we, the military melodrama in which the valiant soldier wins the heart and hand of the heroine by displaying valour, integrity and noble sacrifice. Shaw, however, does not indulge the audience’s expectations. Instead, he presents a soldier who quivers and hides in the face of danger, only to be protected and saved by a lady. He describes a battle won by default by buffoons who order a cavalry charge against a battery of machine guns, but come out unscathed and victorious because the opposing army had packed chocolates instead of ammunition.

In his anti-romantic realism, Shaw is thoroughly modern. There were not many in his day who had the gall to suggest that a soldier might possibly consider, even just for a moment, that life would be preferable to a glorious death. He shocked and unsettled the sensibilities and susceptibilities of audiences at the time, debunking their Tennyson-tailored fantasies of military glory and heroism by describing warfare at its most blundering and ridiculous.

He presents two sets of couples who seem typically made for each other – a beautiful, rich young lady and a handsome, rich young officer, as well as a servant girl and servant man who work together in close quarters for the same master – and then he stirs them around, mixes them up and re-presents them in switched couplings, deconstructing the conceit of class and society.

And, as already mentioned, he does away with the beloved damsel-in-distress routine and places a strong-headed, sharp-mouthed woman in shining armour in place of the knight.

By far the best thing about Shaw is the way he does all this with humour. His wit is pointed and yet good-natured. We are basically laughing at ourselves. He taught the audience of his day serious lessons in an entertaining way. He alerted them to the artificiality of social conventions and moved them away from idealism, under the cloak of comedy. In his own words, “It is by jingling the bells of a jester’s cap that I have made people listen to me.”

Perhaps because Shaw was so ahead of his time, or perhaps because human nature hasn’t changed at all and our social conventions haven’t changed all that much either, Arms And The Man works equally as well today. Over one hundred years on and audiences are still laughing. A lot. That is, nearly every sentence.

The Sydney Theatre Company cast includes well-known board-treading favourites like Brandon Burke, Mitchell Butel and Deborah Kennedy, as well as some very good-looking young stars who may be recognised from films and TV shows such as Winners & Losers, All Saints, Packed To The Rafters, Neighbours and Home & Away.

It is equally an enjoyable and edifying evening of entertainment.

Arms And The Man is showing at the Drama Theatre of the Sydney Opera House from September 14 until October 31. Discount tickets are available for under-30s.

– Alicia Tripp
Alicia is a seasoned arts and music journalist, as a former critic for the ABC Limelight magazine and State of the Arts. She has a degree in Media & Communications, English and Music from the University of Sydney.

Disclaimer: The Plus Ones were invited guests of The Sydney Theatre Company.