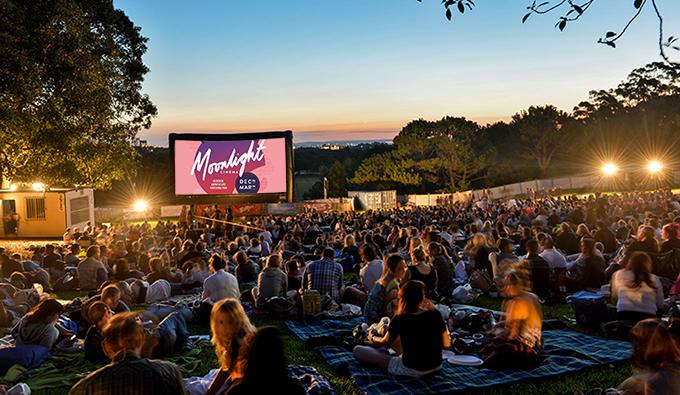 In a city who’s winter is often warmer than summers in its northern counterparts, when it comes to open air cinema Sydney has an impressive variety to suit every season – or lack thereof! From beach-side, to the garden, to the moonlight cinema Sydney serves up a setting to suite every Aussie cinevore. 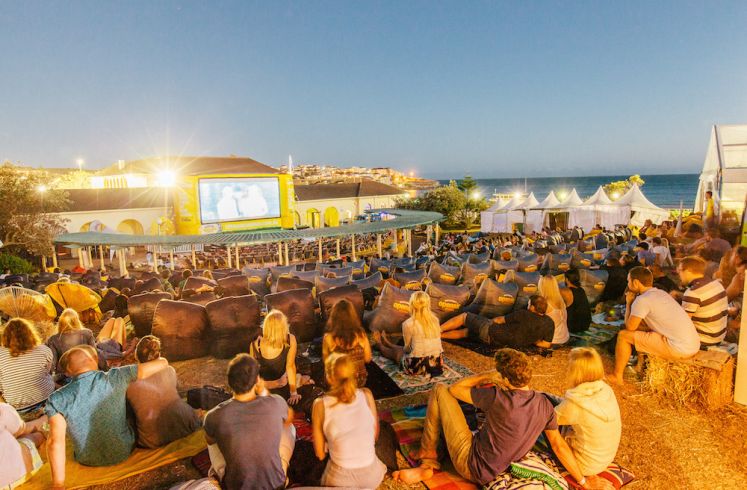 World-renowned Bondi beach has its own open air cinema Sydney siders love! Because beaches are not only for swimming and surfing, this favourite warm weather location turns into a cinema over the summer and brings the big screen to the seaside for you to overindulge in. Be it lots of films, or Ben and Jerry’s ice cream there is something for everyone to enjoy at this famous location. If that is not convincing enough, just check its awesome photo gallery in the website and keep your eyes opened for the full program release, where, as you will see, it is not only about the films (which are usually the favourite blockbusters of the year) but also the live music from both the best of Australian established and emerging bands and artists. It is a must for the summer! BTW, if you are really considering overindulging in B&J treats, you better book a session on a Sunday: FREE ice cream for everybody! My recommendation: even though they offer VIP options for seating, I’d rather be there early to lock in a good spot, extend my picnic blanket, and spend the rest of the arvo/night there while relaxing and enjoying the pre-screening live music and the ice cream (you might also want to bring your own food, as this is allowed with the exception of alcohol- Don’t worry a full licensed bar is within reach!).

Centennial Park (sighing). Its green lawns, its lakes, it 19th century like landscapes and trees, its track runners, its weddings photo-shoots, its visitors walking their dogs, its artsy gates and …. ITS MOONLIGHT CINEMA! Yes, this traditional spot for open air cinema Sydney Siders can enjoy with picnics, BBQ`s along with a summer flick or two. Located in Belvedere Amphitheatre, on the corner of Carrington Dr and Broome Ave, the park invites film and outdoor lovers over December, January and February to save a spot and enjoy the natural vibes of this magical location, for a 8.30pm screening. But if those 3 months were not enough for you, there are also sessions in March starting a little bit earlier. The film program varies from showing advance screenings to new releases and cult movies. Feeling fancy? Then the Moonlight Cinema has the MasterPass Gold Grass ticket, which will allow you to watch the film from a very privileged spot on a comfy beanbag. Feeling hungry? This cinema probably has the best-catered food and snack bar for an out door cinema. Why? Because of the LA Style Food Truck on site that offers pretty much anything from cheese burgers and nachos, plus the best of the Aussie traditional cinema snacks (e.g. Choc Tops!). They also serve alcoholic and non-alcoholic drinks. My recommendation: Try to make it to a cult film session and start your evening making the best out of your visit to Centennial Park by enjoying nature’s free entertainment: go for a pre-screening walk or jog around the park’s tracks and lakes, and then head to save your spot by 7pm. Bring your own blanket, and enjoy the food available onsite while waiting for the sunset to come.

ONLYMPIC PARK: MOVIES BY THE BOULEVARD 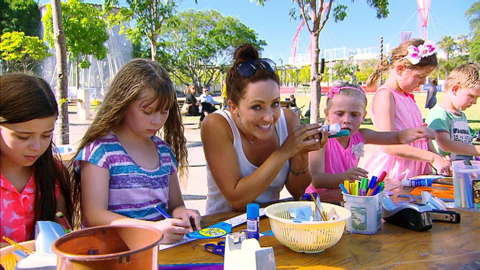 As glamorous as its name is, this open air cinema Sydney offers is all about glam especially designed for kids and families at a very spacious location. One of the best things of making this your next venue to catch films in summer is that the Movies by the Boulevard film program is FREE, and has been free since its beginnings 14 years ago, making it the longest running cinema under the stars! The showcase is very varied, including short films, big blockbusters, classic films and the popular kid friendly movies from previous years. As this is specially catered for families, there is also a kids activity space and program running before the screening from 5pm. This is such a generous outdoor cinema where you get to watch a film for free at a premium location, plus the advantage of entertainment for your kids and you are allowed to consume your own food! My recommendation: definitely make it there with kids and allowed enough time to check out the Olympic complex with them as it is full of cool spots, parks, cafes and restaurants in which to have an afternoon bite. Bring a comfy cushion and blanket, and make the best of the evening starting with the complementary children’s activity at 5pm. 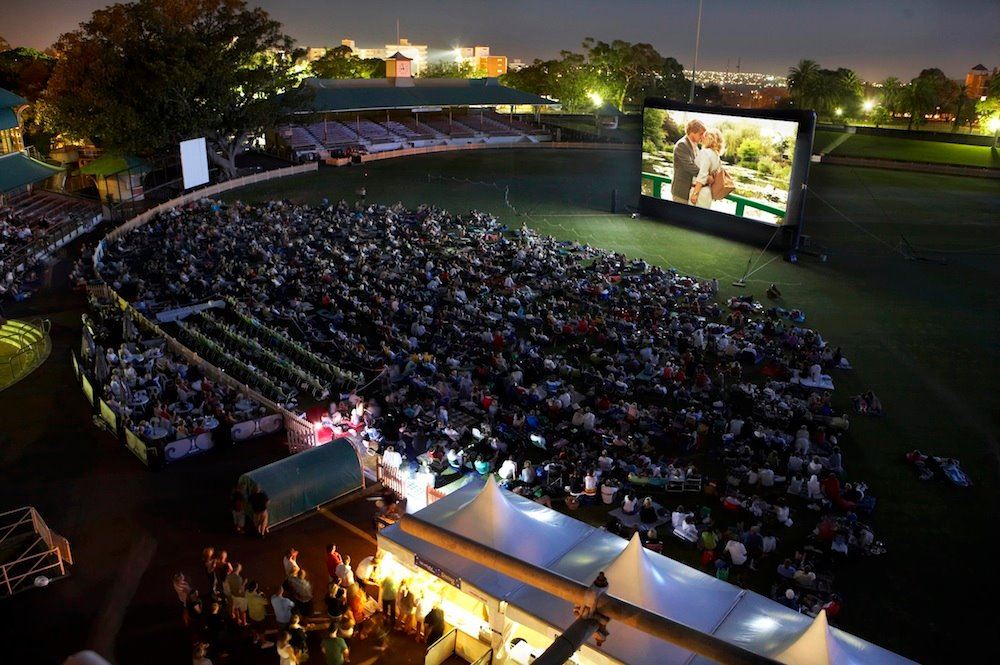 Northsiders, this is for you. And for non-northsiders, this is a great opportunity to head over the bridge and go for a stroll around this area of Sydney.  Located in the south-western corner of St Leonards Park, at the intersection of Miller & Ridge Sts. the venue has a sporty look as you will find yourself seated in the middle of the green and lush North Sydney Oval. Yes, you will be attending a session at this very iconic and architecturally pleasing venue for sport, which, of course, has a very flexible assortment of seats on offer, as well as drinks & snack bar. Usually a guest pop up restaurant is on site as well. Please note, doors open at 7pm and you are welcome to bring your own seat, just make sure it is not a pointy legged one, as they strive to take care of the lawn and premises. The film program is released as the dates approach closer to the summer. My recommendation: do early reservations for the Cobs Popcorn Lawn Lounge, that way you will make sure you will be seated in premium viewing location, on a comfy bean bag whilst indulging in one of my favorite Aussie owned and made snacks I’ve ever had so far: Cobs organic popcorn! Seating in this open air cinema Sydney has reserved for it’s cinevores, will also ensure you a mouth-watering dinner and ice cream for dessert. 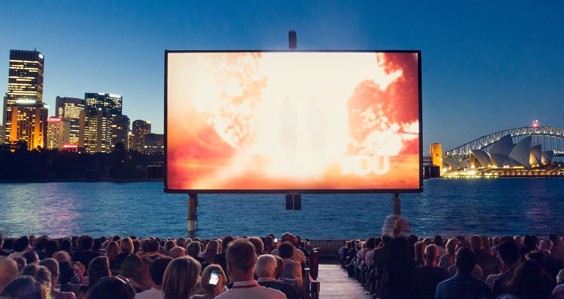 Sydney Siders shouldn’t miss the chance to watch films under stars at the botanical gardens in premium style! Thanks to St Georges Open Air Cinema Sydney spectators can do so with a greater view than just the film on the big screen. Facing the harbour, people attending sessions at the botanical gardens also have the privilege to capture the view of the city, the harbour bridge and of course, the opera house, all in one while watching a film. This is the only time of the year when Mrs Macquarie´s Point also becomes a cinema.  Gates open at 6.15pm with plenty of time to get some drinks, serious nibbles and real hot food from each year’s official caterer of the event.  My recommendation: save a spot, go and grab some drinks, sit, relax, enjoy fine dining from the exclusive dining area and enjoy the view until the film starts. This is what I call a film with a view!