When an exhibition of New York style icon Iris Apfel’s collection of costume jewellery and couture fashion was exhibited at the Metropolitan Museum of Art in 2005 it caused a sensation. Within a month of opening it had been attended by some of the most important members of the fashion elite, including Karl Lagerfeld, Giorgio Armani, Carla Fendi and Rachel Crespin, who said in a New York Times interview, “This is a visionary show: nothing on this level has been done for years.”

The one-of-a-kind Apfel, aged 93, is the subject of the last documentary ever made by the late American filmmaker Albert Maysles, out in cinemas now. 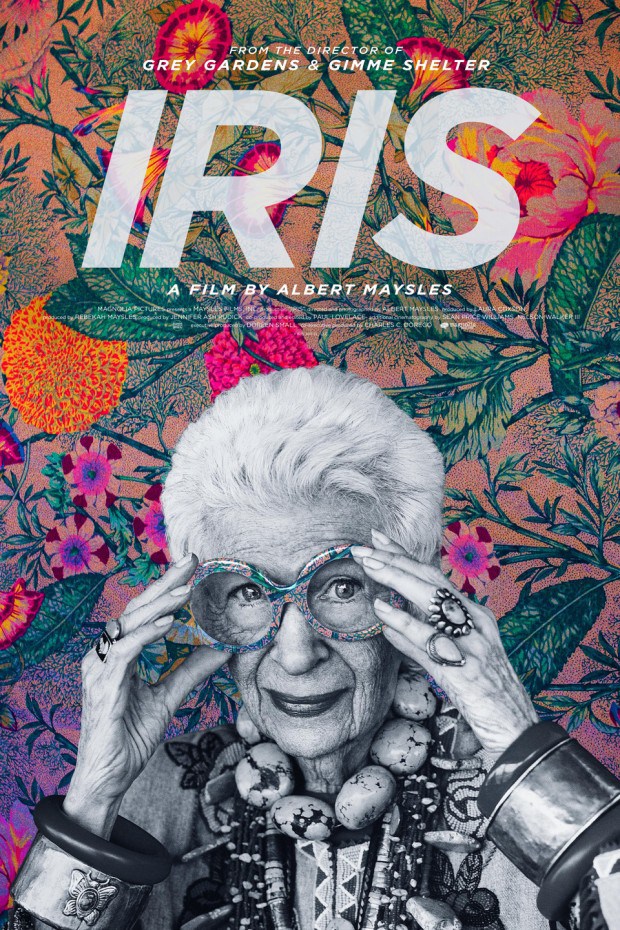 An intimate ‘day in the life’ portrait of the universally-loved interior designer turned global fashion icon, the documentary joins Iris at home with her beloved 101-year-old husband Carl; on trips to vintage emporiums where she searches for flamboyant pieces to add to her staggering collection of costume jewellery (“I get more of a kick out of this [bracelet] that costs $4 in change, than if my husband took me to Harry Winston”); and packing up her formidable collection of one-off couture pieces for transportation to a permanent collection at the Costume Institute of the Metropolitan Museum of Art in New York.

While the documentary looks into Iris’s present life under the spotlight as the brilliant and eccentric geriatric style icon who inspires generations of people with her ability to accessorise outfits, (including in styling classes with up and coming design students), it leaves information about her background sparse. Maysles gives us a brief look at some of Apfel’s travels with the Old World Weavers textile firm she founded with husband Carl, and shows snippets of her attending fashion shows and parties, but doesn’t reveal much about her upbringing or early life. Nor does he detail exactly how she came to be so universally known, other than touching on the reception of the Metropolitan Museum of Art’s exhibition of her collection.

But what the film does offer is a gorgeous snapshot into a life well lived. With it’s focus on the life Iris has built with Carl over 67 years of marriage, it is as much an affirmative love story as it is a portrait of an icon. The pair’s devotion to each other is apparent and beguiling throughout, with Carl fondly attesting, “It’s been quite a ride.” As a portrayal of this, and Iris’s sharp wit in talking about style, fashion and her experiences of eccentric boutique owners and New York society, it is a brilliantly entertaining and reverential film.

On camera Iris reveals: “I didn’t give a damn about going to the party, or being at the party, it was getting dressed for the party – and there’s truth and poetry in that.” Testament to her true passion for dressing and style, the documentary shows that, while she does enjoy the invites to the best parties, fashion shows and sought after TV spots, she has always been motivated in the purest way by the clothes and jewellery, comparing her way of dressing to jazz music.

Old World Weavers took Iris and Carl all over the world, something Iris reflects upon as a reason for not having children in one of the most moving moments of the documentary. If it was a compromise, though, Maysles’ film makes it abundantly clear that the Apfels have lived – and are still living – as full and colourful life as anyone could ask for, Carl reflecting poignantly, “You only get one trip.”

Rosie Pentreath is a freelance arts journalist who moved from the UK to Sydney in April 2015, just to shake things up a bit. Formerly Digital Editor & Staff Writer at BBC Music Magazine, her writing has been published by BBC Music Magazine, Homes & Antiques magazine and The Debrief, to name a few. When she’s not writing, she’s most happy running around with a Pentax MV1 SLR camera or discovering as much new music as she can. Rosie tweets at @RosiePentreath