WOW! That is what I said right after this event finished. I have been at many creative, fun and artistic film events in my life, but what the guys from the Underground Cinema put together last Saturday was completely authentic and out of this world. This is how my first experience with the Underground Cinema went:

I’m new in town and thirsty for getting to know everything about the arts and film scene in Sydney. I raised my hand to cover this event and literally knew nothing about it except that it was something that involved a film screening.  Later that night, I felt that the less you know the greater the experience is of the Underground Cinema for beginners.

I got my tickets, and it was not until a couple of hours before the event that the location for my “interview” was revealed to me by SMS. Wait a minute, did they say interview? Better show up dressed to impress! Indeed formal attire from the 80´s was requested and would be compulsory. What is going on? Where am I going tonight?

Anyway, I did as they said, except for the attire (bummer), I got there at 7pm-ish and was given a blue wristband. There were some other people lining up for the “interview” as well. Other more attentive people showed up in their executive attires and hairdos. Still had no idea what this was all about, or what was next!

Feeling like I was part of a very big joke with a hidden camera somewhere, we proceeded in a very organized line to the top floor of a very corporate building on Loftus Street in the heart of Sydney’s CBD. I was very quiet, trying to understand what was going on and expecting to head to a screening room to eventually watch the film. However soon the quietness turned to laughter and total surprise. My jaw dropped as I entered the office. Some very particular characters welcomed us. They were the stockbrokers of New York’s Wall Street in the 80´s.  I couldn’t believe what my eyes were seeing as suddenly I was transported back in time! 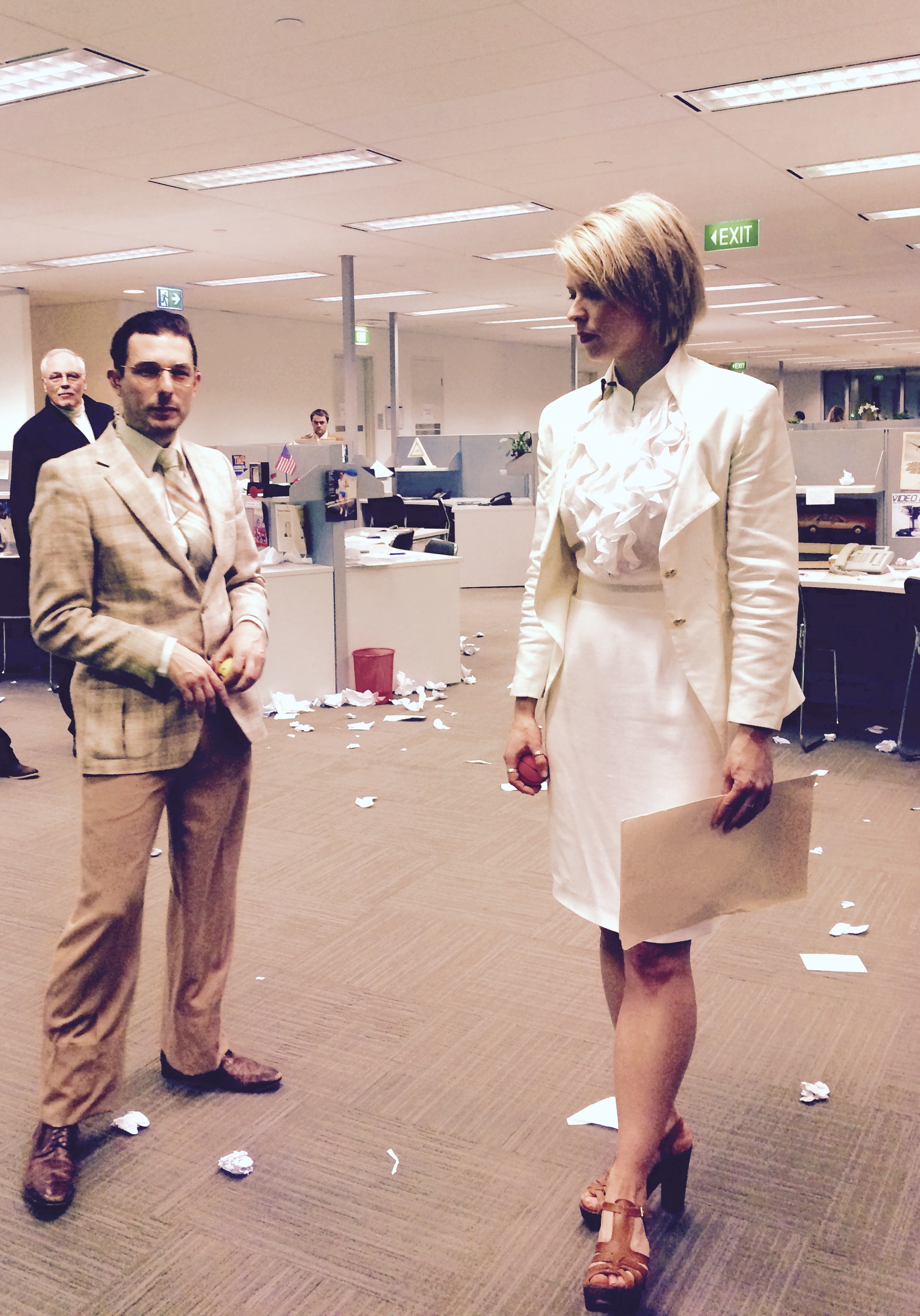 That was not a normal office that you’d find today, but an authentic workplace from 30 years ago! The computers, the phones, the posters, the stress balls, the fax machines, the radios, the air fans, the pencils… phew, I can’t even remember what else there was!! It all made me feel like I was back in the time I was born. All I could think was OMG these guys are geniuses! How did they manage to source all of these props and secure such a great location for this complete craziness for the sake of the arts?! 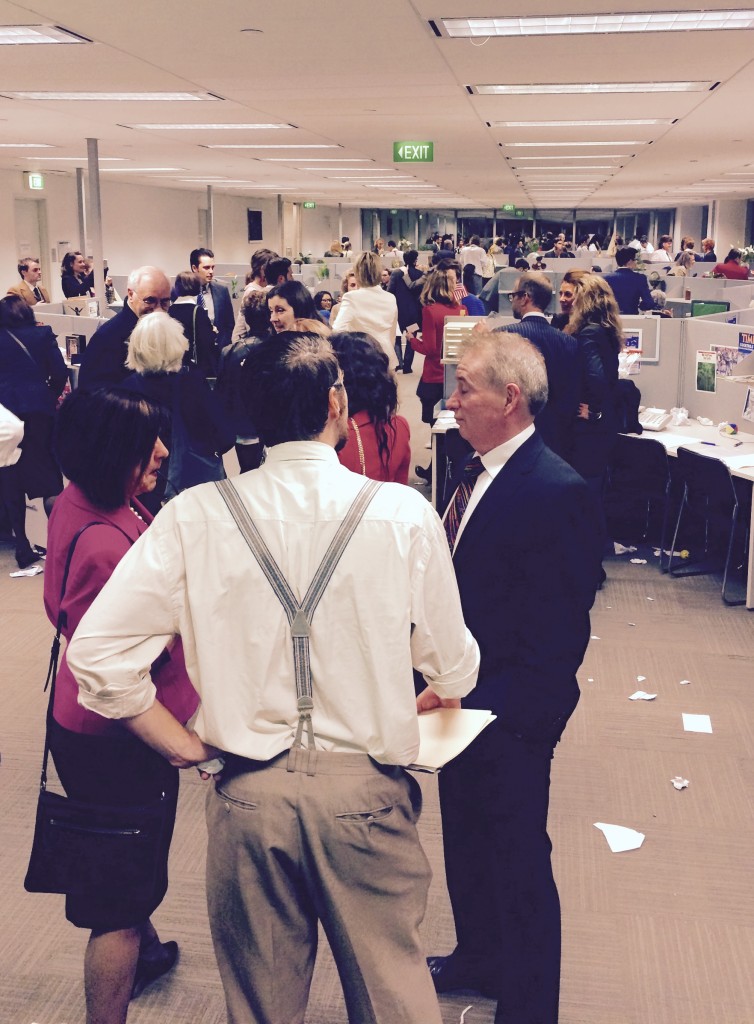 Suddenly we were seated for a seminar as prospective candidates to become stockbrokers. With amazing performances and the best corporate attires from the 80´s the staff taught us how to make calls, to sell shares and MAKE MONEY! By then, I realized that the film screening was not really the highlight of the night nor was it happening any time soon. Instead we had a couple of busy hours ahead of us making “money” selling and buying shares, or (if you preferred) buying drinks and cocktails from the pop up bar. Basically, a lot of fun before the actual screening started.

Back at the office each of us was allocated a cubicle with our own phones and scripts to sell make believe shares of 80´s companies. My company was Nintendo! Yes, they were genuine companies, and we better make a sale! I did so it wasn’t a bad start for me, someone who had no idea about finances and the corporate world, right? 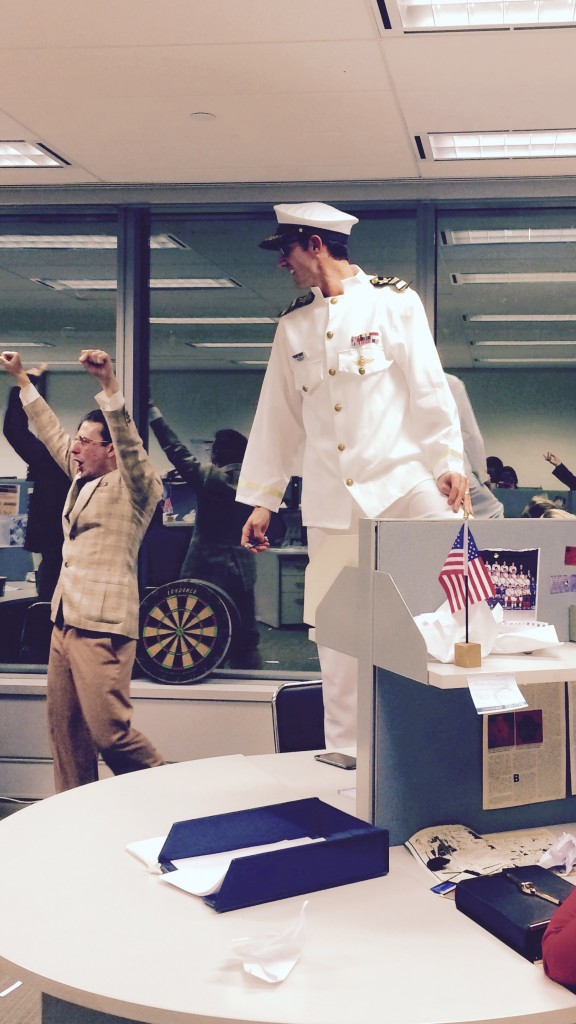 The next station we were moved to was for trading shares amongst the group. It was all about more laughing and yelling at each other, as well as learning the sign language of the stockbrokers. That was interesting and I wondered if it still works the same way in 2015. 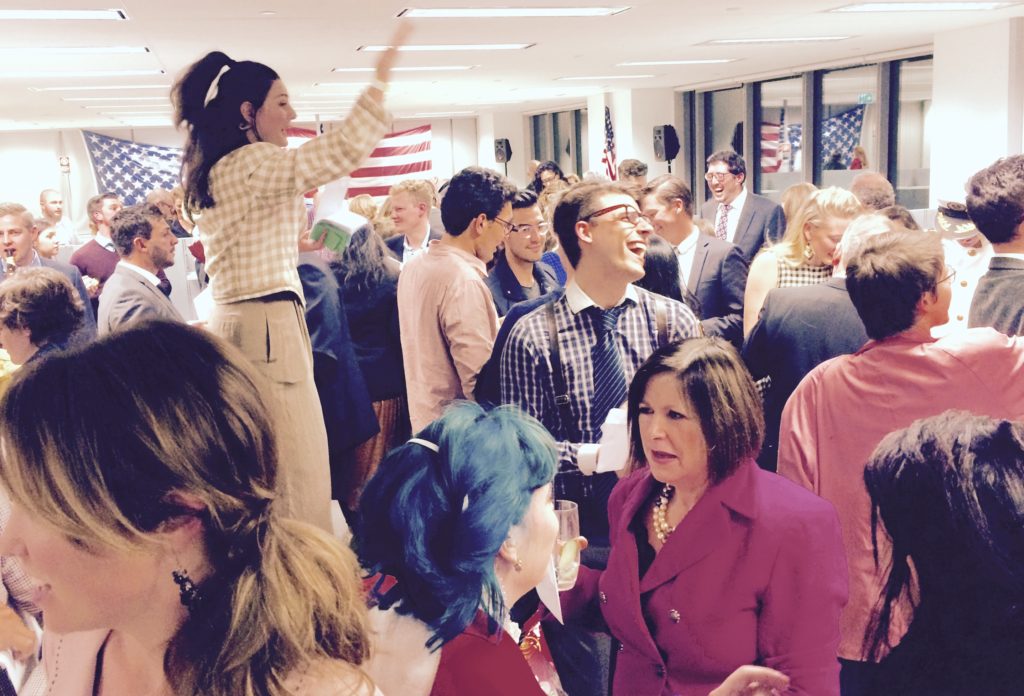 After having learnt the principles of share trading and how things worked in the Wall Street of the 80´s, we were back to the bottom floor of the building ready to be taken to watch the film! What was the film again? No idea, I remembered, as I took back my breath after being part of such a massive play in which I had just been a stockbroker! 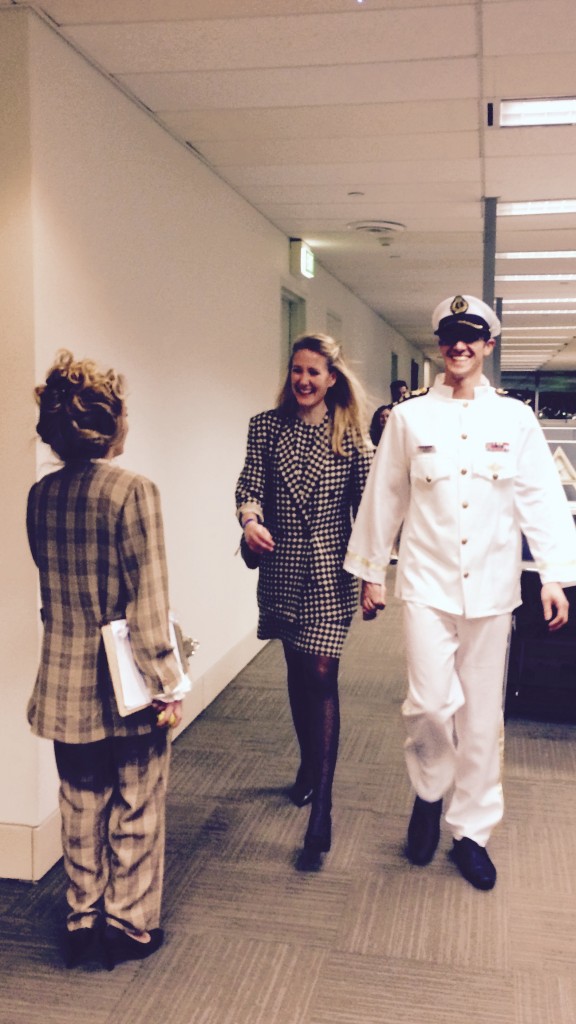 We were now seated in the big cinema of Dendy’s at Circular Quay, and it wasn’t long before the whole place was filled. Then, just before the film started Mr. Rutherford (one of the characters from back at the office) gave his last speech on how he is going to make “America the best company EVER!” 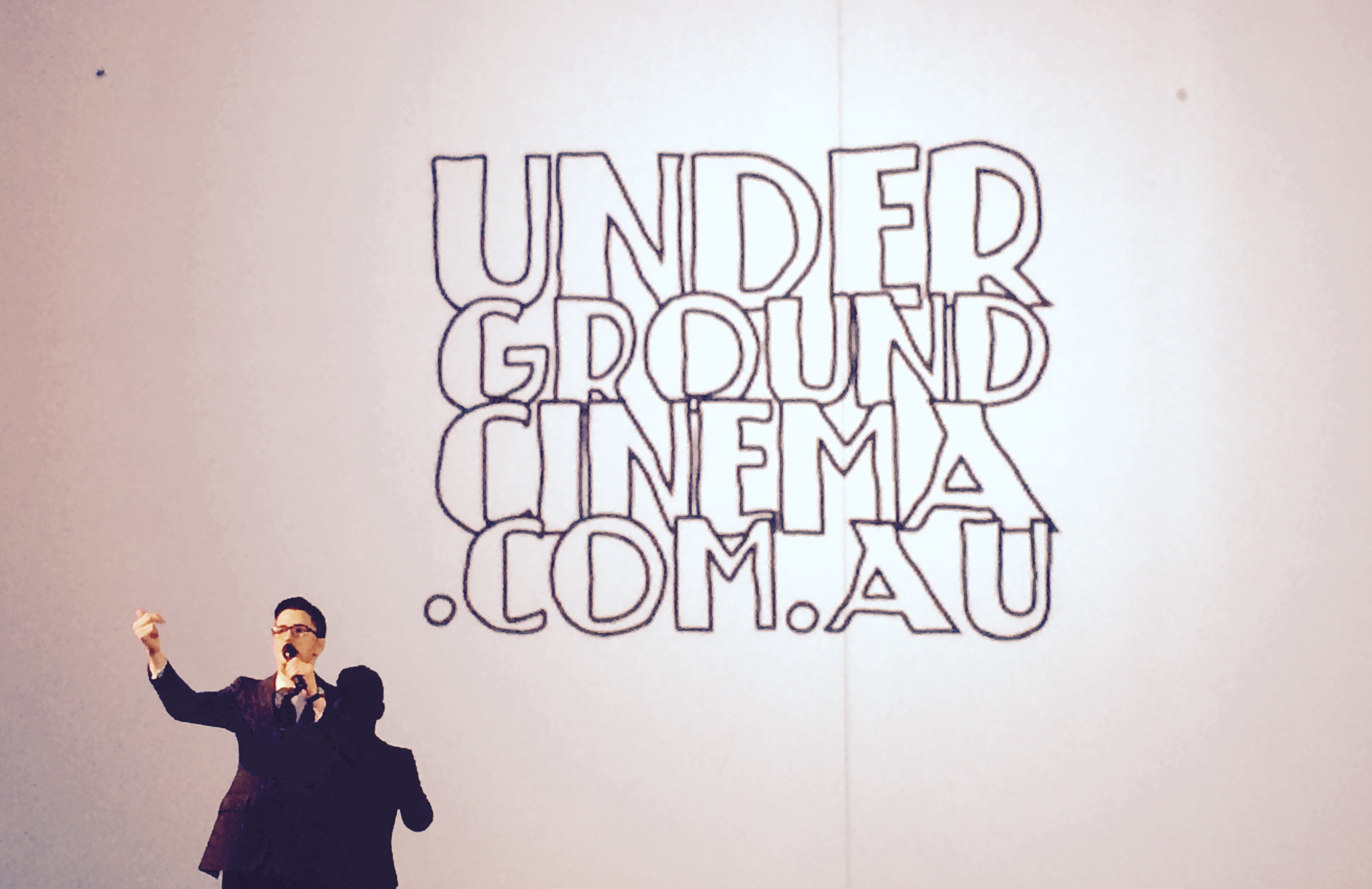 Any idea what the film was going to be? The people cheered and applauded as soon as the film’s title WALL STREET came up on the screen. Yes, it was the 1985 classic with Michael Douglas and Charlie Sheen. As I mentioned earlier, the film became a secondary thing amidst the entire universe we had been immersed in to enjoy and live. Therefore, for those who haven’t seen it I’ll leave the details of the film for IMDB to explain. However, all that I lived in just a few hours could only happen at the Underground Cinema. It was an absolutely unique evening and my feelings and thoughts were joyous for having had the experience of becoming a stockbroker for one night. That is what I called a real cinematic experience! I can’t wait to attend another session, to find out what the theme is going to be next time and what these clever guys are going to come up with then.

One final note, did I mention, that the office staff actually had the real New York accent?! Honey, it was hilarious!

– Gina
Gina Rubiano is an Arts and Cultural Manager, specialized in film. Her passion is the acquisition, exhibition and distribution of cinema, specially from Latin America, and her professional background has mainly consisted in roles in which she has been able to promote and grow new audiences for great films in Australia.

Disclosure: The Plus Ones were invited guests of UGC.

Melbourne or Sydney – Who has the better coffee?