On Monday night, Australian performers from contemporary and classical stages in comedy, dance, plays and musicals came together to celebrate the annual Helpmann Awards night. Glittering stars graced the red carpet allowing just enough time for photographers to capture their fashion statements (outrageous and glamourous). Rhonda Burcher wore Versace whilst Consentino, the grant illusionist, lured us into his world of fantasy with a dazzling array of colours. A few women seemed to be into the dinner suit look including Canadian born nominee (and eventual winner for best actress in a play) Pamela Rabe. Nominee for Best Male Actor in a supporting role in a play, Lasarus Ratuere, arrived on the red carpet with his mum. Although he lost the award to John Bell (As you like it), Lasarus certainly won the award for charm. With Andrew Upton indulging us for a photo op, the night was off to a good start. 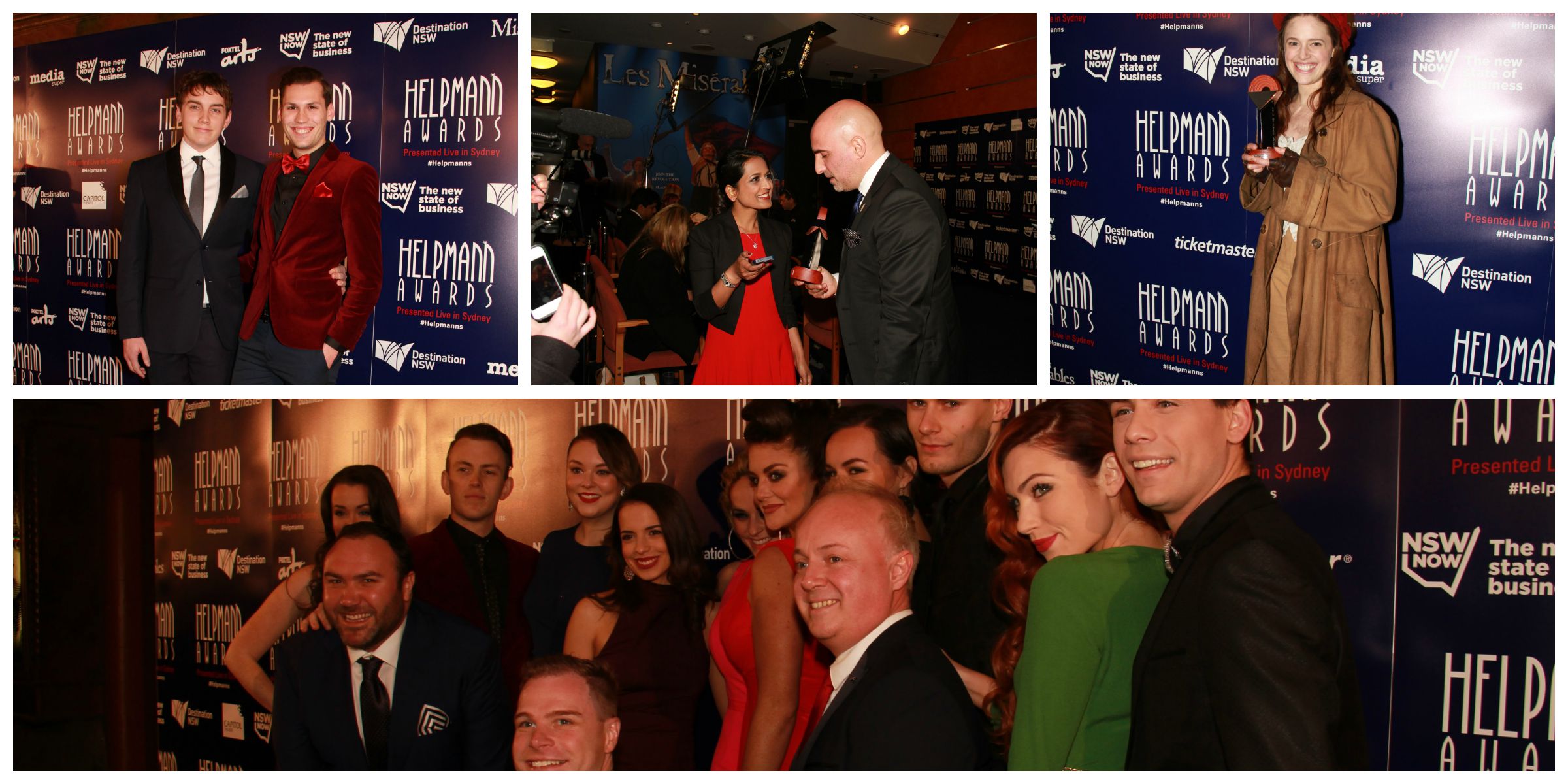 For nominees and other industry guests, the night began at 7:30pm. For the Australian goddess of film and theatre, Cate Blanchett, the night began at around 7:45pm when she ducked into the theatre unnoticed. Our photographer was ready for a photo of her though as she waltzed passed us to the Winners Wall in a ravishing black off-shoulder ensemble. Classy Cate. As the night progressed, Todd Mckenney proved his singing and on stage undressing skills as he hosted the awards night. Other presenters included Cate Blanchett, David Campbell and Adam Garcia.

For The Plus Ones team, the highlight would have to be interviewing the winners as they came directly off stage to the Winners Wall. Comedian Judith Lucy was named best comedy performer and when asked about what advice she’d give to upcoming comedians, she said, “Give Up!” One of the reporters next to me asked Judith who else she’d like to thank besides the people she mentioned on stage and she quipped, “No one. Everybody else can just get lost.” Geoff Cobham took home the award for Best Scenic Design in the Industry category. When I asked him how it felt to win, he replied. “It’s pretty terrifying. I spend my life on the other side of the theatre. I never want to go on stage so it’s a bit scary.” When I asked if he expected to win, he said “I was encouraged to come so I prepared a bit of a speech.” Andrew Hallsworth, winner for Best Choreography in a Musical, said that he won last year for Sweet Charity and didn’t expect to win this year. “I really didn’t think that I’d get another one. I think I’ve outdone my quote.” Rafael Bonachela, winner of the award for Best Choreography in a Dance or Physical Theatre Work told me, “I’m speechless. It’s a wonderful recognition. I’m very pleased. You know…I work with this incredible group of dancers and they deserve this. I’ve always been invited to give awards – which is always very nice. But it feels great to be on the other side.”

Kerrie Ann Greenland from Les Miserable was still in costume when she accepted her award. “This is so amazing. I did not expect to win,” she said to me when I interviewed her. She was still shaking from the shock of receiving the award. “I’m very lucky. I’m very grateful,” she continued. When asked if she’d like to put out any message to her fans, Kerrie Anne replied, “Just thank you and come see Les Mis again.” Simon Gleeson took home the award for Best Male Actor in a Musical and Cameron Mackintosh won the award for Best Musical. In all, the Les Miserable cast would have been anything but miserable after their most wins.

Australia is filled with talented people; people who take their craft seriously. From the likes of Simon Gleeson to Pamela Rabe, there is much to be celebrated right here in this great south land of diverse talent.

Bridgett Leslie is the 2014 Winner of the British-Australian Literary Award. Visit her at www.hopewords.org or https://twitter.com/bridgettleslie

For more on the Helpmann Awards visit them here.

Disclosure: The Plus Ones were invited guests of Undertow Media.