Germany’s very own Jägermeister (in association Salon Zur Wilden Renate, The House of Mince, Something Else, and Charades) brought a thrilling fusion of Berlin’s music, art, and culture to what would have been an otherwise ordinary winter night in Sydney – the grand finale of the season’s Number56 parties. Believe you me, this evening was anything but ordinary. 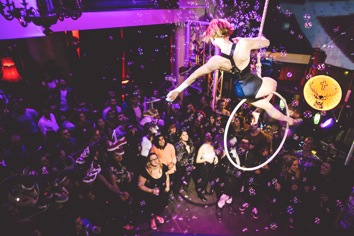 From the first flyers we saw to our final invitation to the event – mystery, anticipation, and suspense shrouded the affair…in the best possible way. Our intrigue was further escalated when the closest thing we got to directions was the invite, asking us to go to a street-corner where we’d “find something colorful.”

“The suspense is killing me,” someone said, as we – much enthused – scavenger-hunted our way to a night like no other (leaving our phones, cameras, and inhibitions at the door – as instructed). 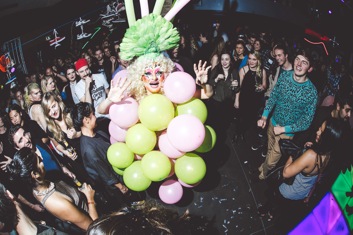 Past a rather non-descript hidden doorway, we were greeted by a cirque du unorthodox of performers, dancers, and acts; supported by Berlin’s finest DJs Steve Bug, Kill Frenzy, Baron Castle, Christian Vance, Michelle Owen and Claire Morgan. A crowd interspersed with roving spectacles and masqueraders, we had made our way through the portal of nightlife’s Narnia.

From the spiraling aerialist Missy, who had the audience in a trance, to the magnificent live art by the mystical beard meister Mulga, the night oozed as an amorphous cocktail of all things deviant-chic, abstract, and artsy. 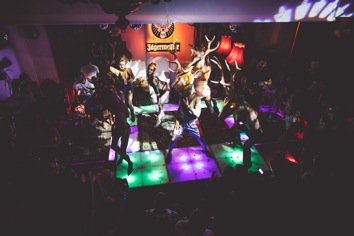 Speaking of cocktails, Jägermeister had us covered, with authentic German concoctions such as Jäger-Mate, paired with the most delectable of Berlin street food. YUMMO.

The menagerie of the night’s spectacles had us lose all concept of time; as we drank, ate, and danced a Thursday night away. But, I must admit – there could have been no better excuse to go all out on a school night. Besides, what happens at Number56 stays at Number56, so the world was none the wiser.

– Ace
Ace is the Director of The Plus Ones – Sydney. He is a marketeer/eventologist who suffers from a chronic case of FOMO, and is pursuing his lifelong goal of spending the least amount of time possible at chez lui (well, when he’s not half-way through an astrophysics doco).

More events in the Number56 series to be announced in due course, stay tuned to @Number.56 on Instagram to find out more. #NUMBER56

Disclosure: The Plus Ones were invited guests of Jägermeister.

‘Don Carlos’ at The Opera House