The 2015 Sydney Film Festival came to an official close last Sunday 14th June with a very special showing. Australian stars of film and television, many starring in films throughout the festival, gathered together for the world premier of ‘Holding the Man.’ The film is much anticipated in the creative world, an adaptation from a autobiography, to a play, and now to screen. The production of this film has been stunted and revisited by several directors and writers over the years and now thanks to the collaboration of writer Tommy Murphy (Holding the Man) and screen and stage director Neil Armfield (Candy), this love story is open to a whole new audience.

Lead actors Ryan Corr (Water Diviner, Love Child) and Craig Stott portray the story of Tim Conigrave and John Caleo, a couple who found love in each other despite the obstacles of social standards, religious beliefs and the emergence of AIDS. In a time where it was not widely accepted to be gay and there was little knowledge of the transmission and repercussions of HIV and AIDS, Tim and John’s intimate relationship is widely affected by everyone else in the world. 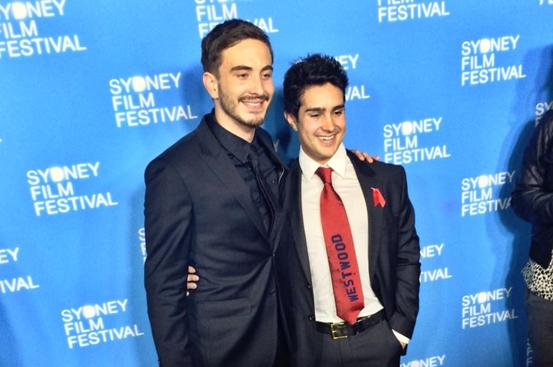 Pictured: Ryan Corr and Craig Stott at world premier of Holding the Man.

Despite the political implications of the relationship at the time, Craig Stott (John), really found a connection with the love in the world, rather than the hate. Stott explains his characterization of John and the way he projected love differently to his partner but still was able to love completely.

“John is a character that is so comfortable within his own skin that he doesn’t feel the need to project it, like Tim does. He was somebody who loved with all his heart and knew what he wanted and followed it, had the courage to follow it.”

Stott showed his admiration for the character, “the quiet knight” as “someone that I [Stott] want to emulate in my life.”

There was definitely no shortage of love on the red carpet with Corr accompanying Stott on his first red carpet and the reunions and celebrations of families, friends and co-stars. The excitement and anticipation was high for the screening, which will be available for public view on the 27th August 2015.

Keeli Royle is a theatre student at AIM Dramatic Arts and hopes to pursue the writing, acting and creation of screen and stage productions.

Disclosure: The Plus Ones attended the SFF Closing Night Red Carpet courtesy of the Sydney Film Festival.