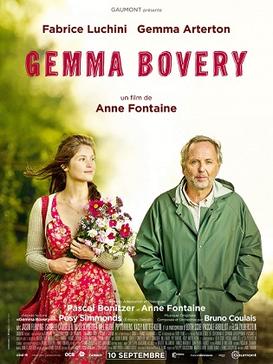 Gemma Bovery is the modern and very beautiful retelling of Gustav Flaubert’s classic novel, Madame Bovery. Based on the graphic novel by Posy Simmonds, director, Anne Fontaine (Coco before Chanel) presents her Gemma Bovery in flashback through the eyes of Martin Joubert (Fabrice Luchini), as he reads Gemma’s (Gemma Arterton) diaries.

In a very obvious life imitating art flourish, Joubert is caught up in the narrative of the original Madame Bovary, having had an epiphany at 16 when he read it. He sees in his newly arrived English neighbours, Charles and Emma Bovery, a replication of their fictional counterparts. Enamoured as he is with both the novel and Gemma, he awkwardly, and quite disastrously, tries to intervene to alter what he sees as Gemma’s collision with her namesake’s fate.

Gemma Arterton as Gemma Bovery is a mesmerizing and luminous presence in every scene, not only for the male figures in the story, but also for the viewer. While the story is presented in a fairly superficial way and we don’t fully engage with any of the characters, it is told with charm. Gemma Bovery is all picturesque countryside, artisan breadmaking, a ramshackle house and passionate love affairs.

Due for release on 28 May, Gemma Bovery is a sensual, if somewhat light, cinematic feast.

Review of ‘Working: The Musical’