nothing will come of nothing – truer words were never spoken in this climate of closures of plague proportions.

Thus spoke the titular protagonist in this classic tragedy of family care and the settlement of wills. In a climate of Covid19 lockdowns shutting down the performance industry, our specialist hometown Shakespeareans, The Melbourne Shakespeare Company, refused to buckle under the vicissitudes of government mandated lastminunte closures which saw this production close on Opening Night in May 2021! But this is a production to remember not merely because of its circumstances.

Acclaimed Australian thespian Evelyn Krape plays the lead, King Lear, an elderly man and retiring ruler who compels each of his children, three daughters, to estimate their love for him in words. What follows is the undoing both of their affection for him and his own sense of power as sister against sister competes for their share of his assets.

A parable on how we treat our elders, the right to be housed, familial ingratitude, jealousy and competitive cruelty, and the redemptive power or pure child-parent love, this play has stacks of famous lines if you want to brush up on your tragedy- Come not between the dragon and his wrath!; Who is it who can tell me who I am?; Reason not the need; I stumbled when I saw; Let fall your horrible pleasure; Unaccommodated man, a poor, bare-forked beast. 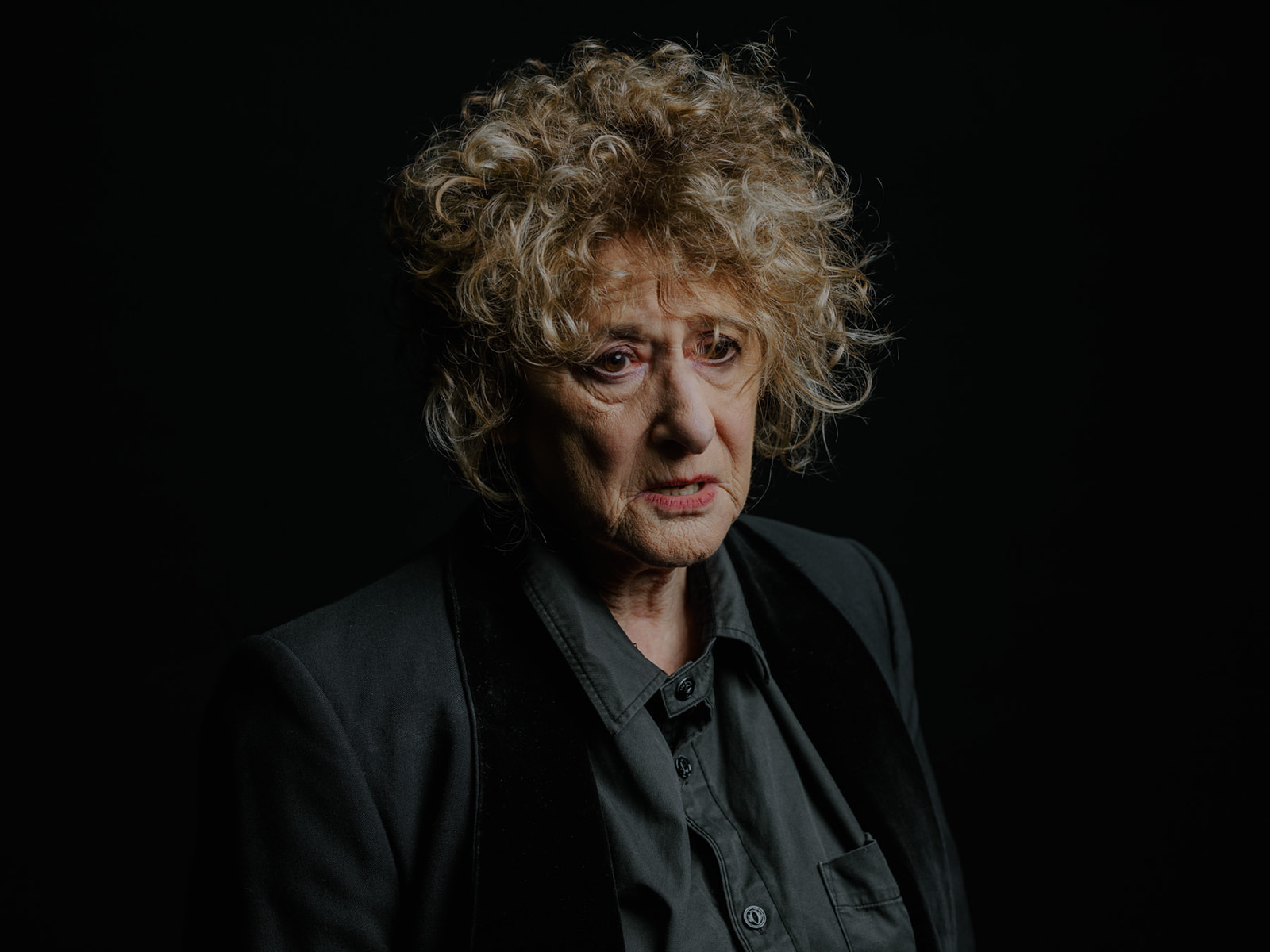 Evelyn Krape is as big and iconic as her character, Lear. Renown nationwide and, especially,  in her home town of theatre, she kicks into the role from her first line and owns it. Aislinn Naughton’s 1920-30s citified costuming, a dark linear uniform of stripes, plaid, and pants, besuits Krape superbly- and she looks every part the tough bigwig/gangster who, here, literally, ‘wears the pants’.

Krape commands attention and authority with veteran accomplishment, loaded with experience and depth, she brings pathos as Lear unravels and is challenged by situation. Her physical animation is vigorous, moving animatedly  about the stage, whilst her authentic gesture, facial expression, and excellent voice convey the deep restructuring of identity her Lear undergoes.

Director Ayesha Gibson brings energy and verve to her version set inside a 1930s business/office with corporate elements set within the distressed industrial interior of fortyfive downstairs at the top end of Flinders Lane. As with all MSC productions, the diction is pure and pace is on- they do not tarry and keep the drama moving with smooth and steady scene changes, gathering momentum. A strong ensemble feel reveals each character playing their part to create background and moment. 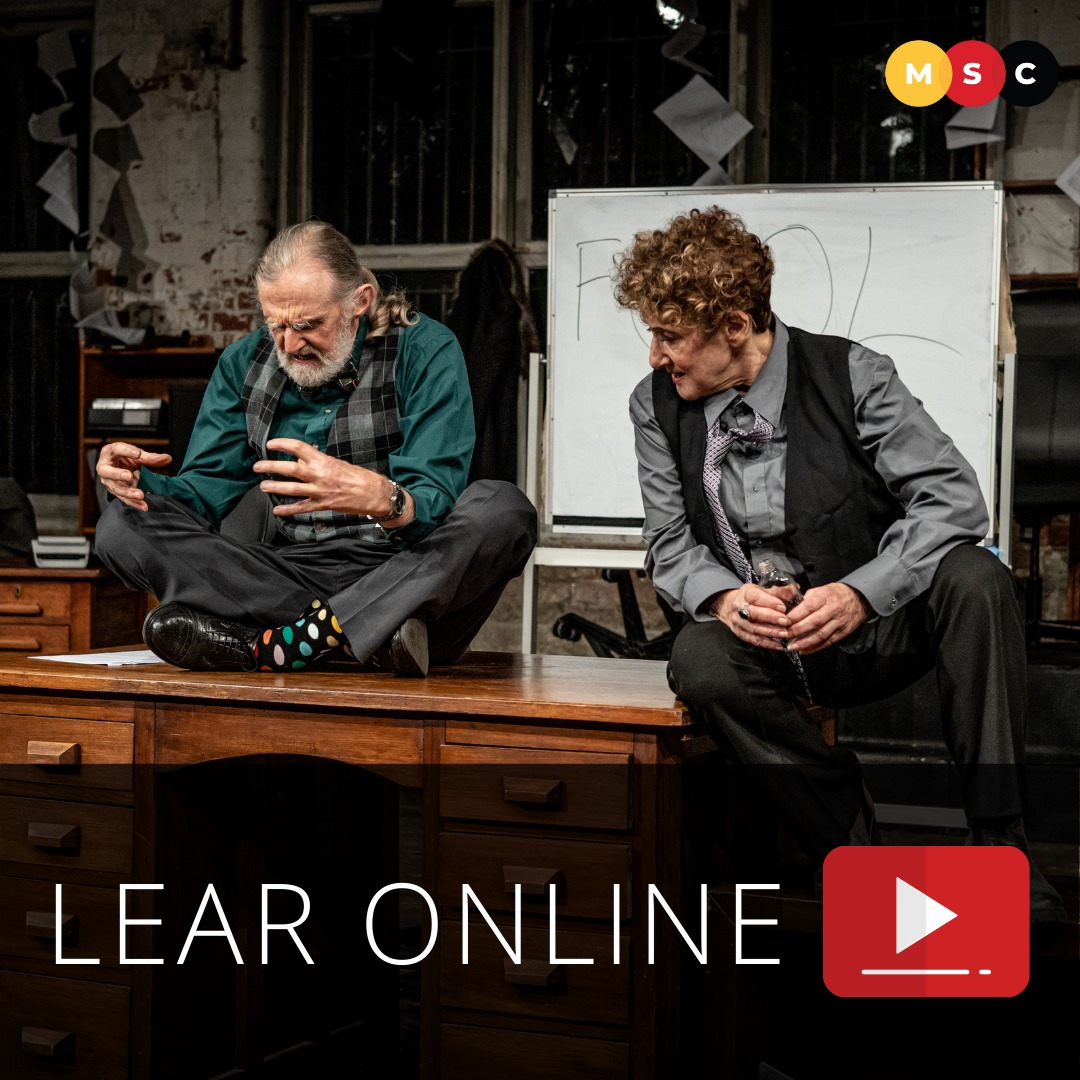 Gibson’s compelling direction honours the tradition within the tale and text whilst directing us to reflect on contemporary themes- homelessness; poverty in old age; the aged care industry; and society’s treatment of those who inhabit its periphery- refugees, the mentally ill, and illegitimate offspring; as well as ego and true powerfulness.

Hayley James’ set piece, a background office whiteboard employed by Gibson  for ‘scoring’ the losses as Lear spirals out of power is chillingly apt for anyone who’s undergone a workplace ‘performance review’. Situated centre-back in white,  this iconic panel sits as totem of portent which underscores the witty banter and ironic truth-telling of Lear’s sidekicks-in-destitution, The Fool and former loyal deputy, Kent, supporting his master’s journey in disguise. 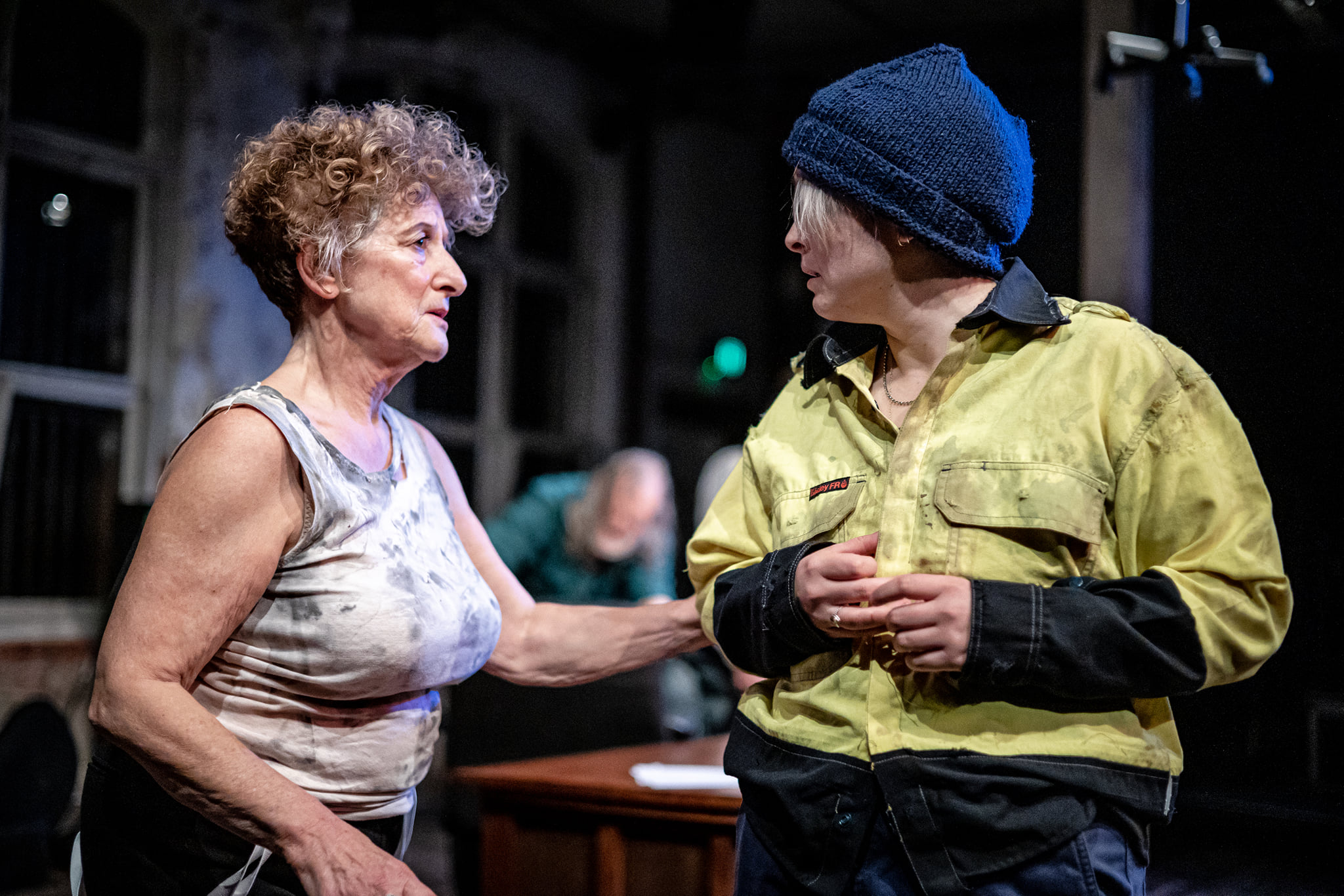 Shakespearean and MSC company stalwarts Claire Nicholls as Goneril, and Annebelle Tudor as Regan, frighten with their sadistic femininity. It is fabulous to watch these accomplished actors knowingly animate two sisters who collude and equal each other in cruelty towards their aging, possibly demented, father.  Both stand and stride the stage strongly.

Of course, the best characters with some of the best lines are the homeless trio Lear, The Fool and Kent, a destitute troupe of fools who roam the countryside out of shelter. As reified archetypes as eternal as those found in Greek drama or within pagan psychology, each embodies paradoxes still redolent for our age – pride before a fall; wisdom only in age, not position; true paternal love; care for the community; a king who rules for his people, not just himself; and the power of a true friendship being honesty.

You couldnt see a better play for the times – a story full of loss and redemption so very apt in this time of great undoing and environmental change and challenge which can undo even the most powerful of leaders. Produced by one of the best Shakespearean companys in the state, sit back and let the experts take you on the journey!

Keep up-to-date with the Company’s future seasons and workshops such as Comedy Of Errors and the 2021 Shakey Slam.

Donate to support the Company.

Disclaimer: The Plus Ones were the guests of Melbourne Shakespeare Company.

Keep up-to-date with the Company’s future seasons and workshops such as Comedy Of Errors and the 2021 Shakey Slam.

Donate to support the Company.

Disclaimer: The Plus Ones were the guests of Melbourne Shakespeare Company.

Treat yourself this lockdown with Glazed Gluten-Free Patisserie

WellRead: the solution to your book-related needs