With the promise of wine, a grooving line-up and a backdrop of lush green estates, it’s no surprise that Grapevine Gathering 2019, organised by Untitled Group, sold out. Melbournians love to party and this was the ultimate day for it: clear skies and a shining sun that truly made it a summer festival. However, it wasn’t only the great tunes that’ll leave a mark, some festival-goers forgot to slip-and-slap and their bright red sunburns will similarly be hard to forget.

When we arrived, however, the sun had passed the critical period of roasting and was more pleasant than anything. We decided to catch a bus in, departing Carlton Gardens at 12:30 pm with an estimated arrival of 1:20 pm. Unfortunately, traffic close to the event meant we actually arrived at 3:05 pm and by the time we entered the festival, it was 3:30 pm, which meant we’d missed both Lovebirds and Touch Sensitive. With the earliest bus departing at 11:30 am, we wouldn’t have been able to catch Big Words or Kira Puru either way – which was a shame because we heard from other festival-goers that they delivered strong performances. It was disappointing to miss the morning acts, so if you’re planning on attending next year, make sure to account for traffic when selecting which bus to take! 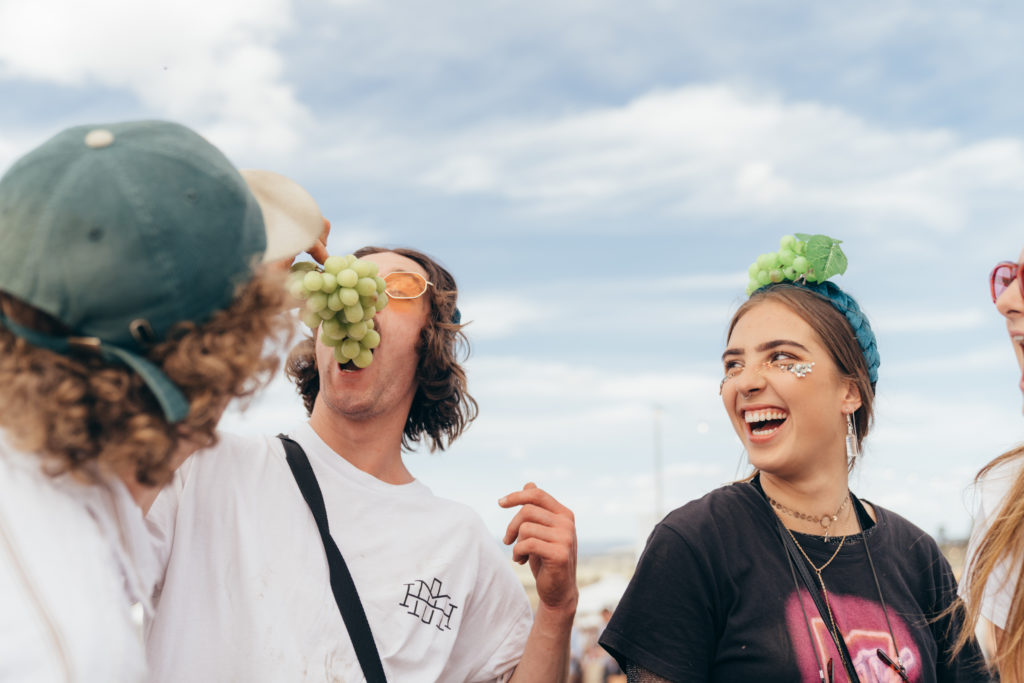 When we entered, we started to queue, firstly for the toilets and then for the food. Neither disappointed: the toilets were in good condition, and the food was great – we appreciated the availability of vegan options and the price reduction when removing cheese from a meal. We aren’t sure how it was calculated but we liked it none-the-less!

Holding the food, we faced a dilemma. There was plenty of space to sit, but the ground was so dry that it was dusty. Some people had thought in advance and had brought picnic rugs, but we hadn’t foreseen that and as such wandered around the available picnic tables until we found a group we could join. They were more than happy to add two members onto their table, telling us how much they were enjoying the pink gin, acts and the company of other people at the festival. They liked the layout of the festival: that there was only one stage, so even if you were queuing for food, you could hear the acts playing. That was definitely true: while we’d been waiting for our burgers, we grooved along to Jack River’s dreamy indie-pop performance. There’s nothing quite like listening to songs about love and loss when you’re waiting for something you’re really looking forward to. 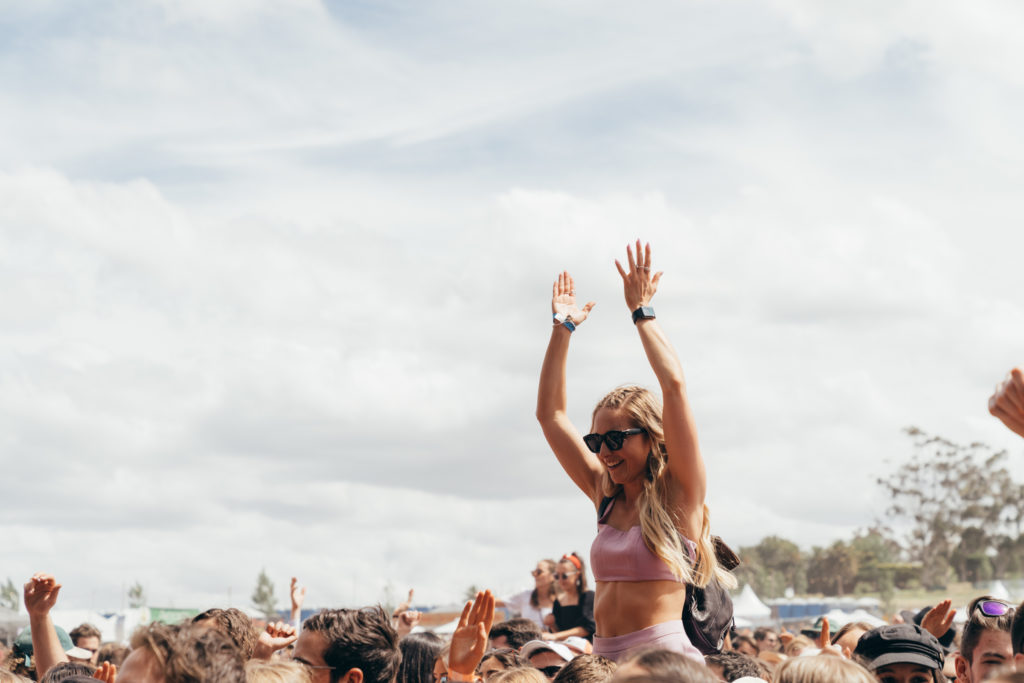 We made it into the mosh for Late Night Tuff Guy, a funky DJ who appears in many Australian festivals, including Beyond The Valley. His deep beats fitted the afternoon mood perfectly – people were dancing and getting ready for the rest of the day, without getting worn out. Mallrat followed and as usual, did a sensational job. Mallrat is undeniably one of the most adored Australian artists – and there’s no reason to fact check, she’s on almost every festival list! With top hits like ‘Groceries’, ‘Uninvited’ and ‘Charlie’ – which was performed in Simlish to begin with – she keeps the mood fun, groovy and real. Following up Mallrat with Crooked Colours was a wise choice. They kept the party going with their vivid electronic dance music, with stand-outs including ‘Breathe’, ‘I’ll Be There’ and ‘I Hope You Get It’. They allowed for a smooth side-step into Flight Facilities, who absolutely killed it. Wearing sailors and pilot hats and lighting up the stage behind them with endlessly moving graphics, they started out strong with ‘Arty Boy’ and kept the mood high through-out the entirety of their set. One of the biggest stand-outs was their choice to include lyric videos as well, giving the crowd the chance to engage in some karaoke. They finished with their classic ‘Crave You’ and you would be hard-pressed to find a festival-goer that didn’t know the lyrics off by heart. 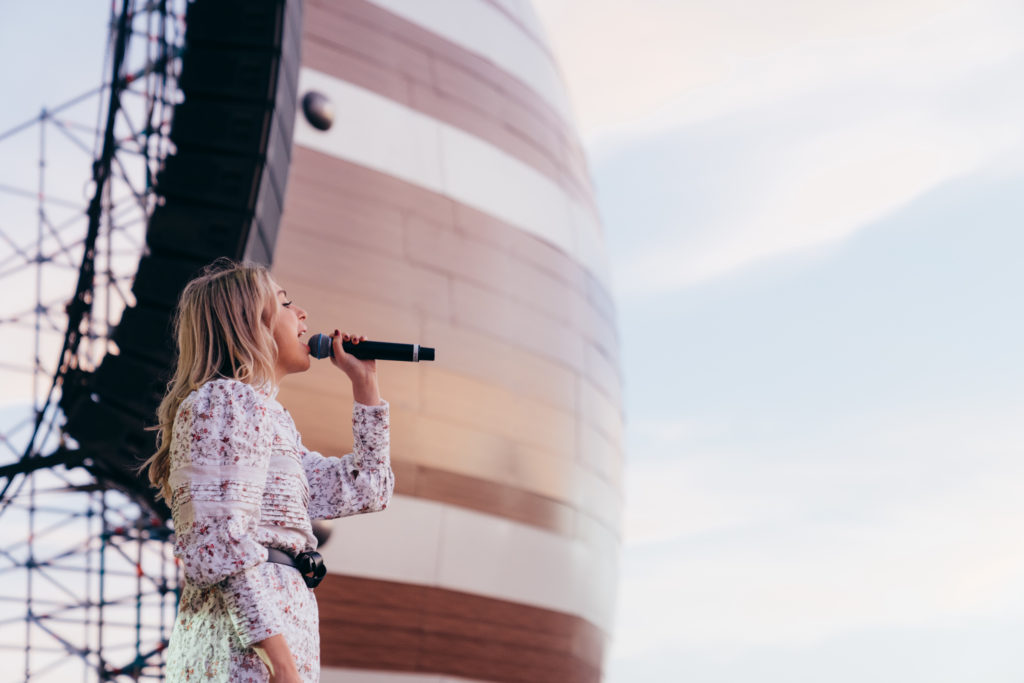 The headliner of the night, Two Door Cinema Club, had a tough act to follow but they knew exactly how to follow it. Before their entrance, the stage lit up, asking the crowd if they were ready. Counting down from four and then displaying an error message – the interest was high – and then on came TDCC, ready to get a groove going! “Hey Melbourne, it’s great to be back!” As always, it’s great to have them back: they combine outstanding visuals with rich vocals and strong solo instrumentals, encouraging the crowd to dance, hold hands and sing along. We loved their performances of ‘What You Know’, ‘Satellite’ and ‘Undercover Martyn’ and stayed until they thanked us all for coming and giving them an opportunity to play. The pleasure was truly all ours: their performance was undeniably a stand-out of the day. 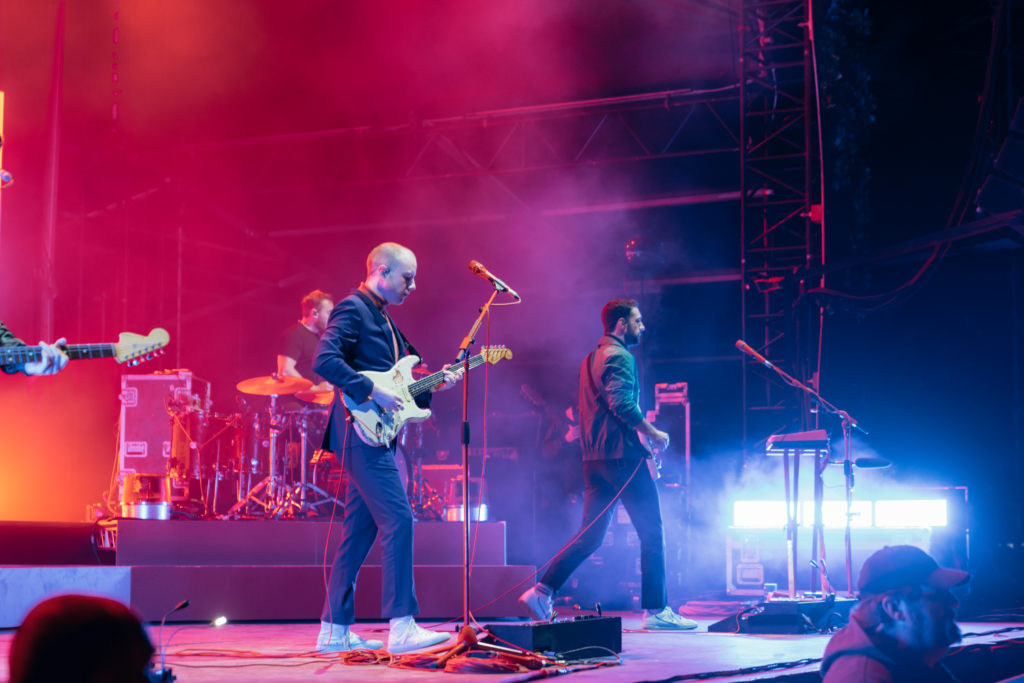 Post-performances, smiling and holding onto their friends so as not to lose them, Grapevine Gatherers headed out to the buses, Ubers and taxis waiting to take them back home. Despite the dust and traffic, Grapevine Gathering left everyone elated and glad that they’d attended. The sunshine elevated the mood and strong performances by Jack River, Mallrat and Two Door Cinema Club cemented it. There’s no doubt festival-goers will return in 2020 for more wine bottles, great tunes and another fantastic day of dancing.

– Daniela
Daniela Koulikov is a freelance writer who loves festivals and sustainability.

Grapevine Gathering is an annual festival run by Untitled Group. Check out their website here.

The Plus Ones were invited guests of Untitled Group.
Image credit: Ben Jones.