This plays got it all. At the Australian premiere of the play adaptation of the 1998 Oscar-winning Film, Shakespeare In Love you gain access to the height of the English literary canon, men in tights, a stunning set evoking London c. 1589 and her stages, lavish sets with historic costumes worked on for up to 12 months, an Elizabeth I to remember, and a small performing dog. Did I say dog? Yep, a tiny terrier who touches the heart while jerking the laugh lines to our jaws, who flits hither and thither across the boards of this upturned stage platform which voluminously fills up the base of the performing space. This show is imagination writ large. 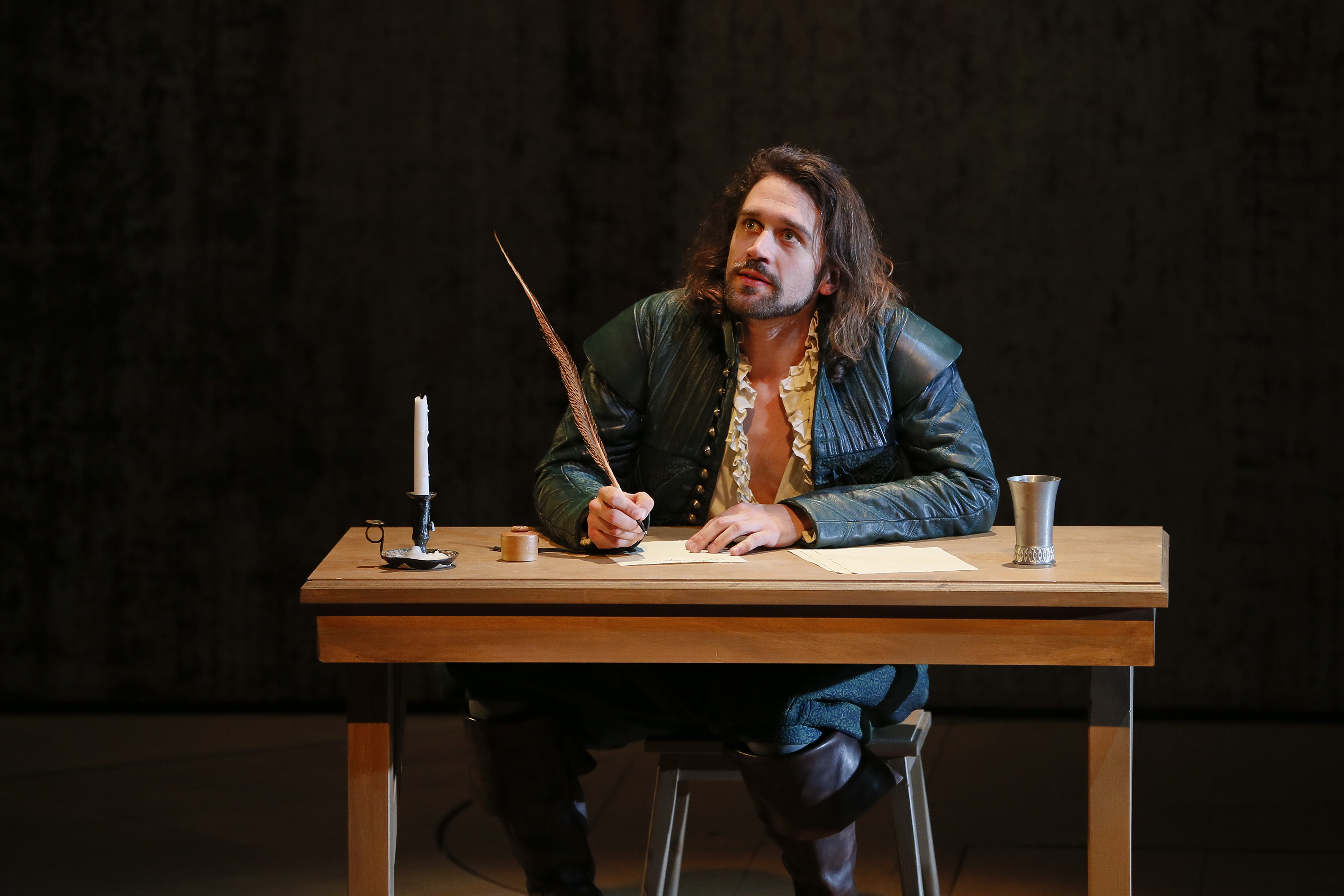 You get this and more. Great acting, deeply  traditionally-trained cast, great lines, good physical enervation, a stunning balance of the masculine with the feminine, romance, decadence, the mob, and bawdy. There’s much to hold your eye.

A cast of 14 with 80 costumes, this script an adaptation of famed UK playwright Tom Stoppard from Marc Norman’s idea of the play about a writer with writer’s block who falls in love with an unattainable woman above his class. It’s a postmodern pastiche of all that is Shakespearean while interweaving excerpts from the Bard’s famous tragic romance Romeo And Juliet into the live plot.  This rendition is in the mirthful, loving spirit of Shakespeare’s whole oeuvre and would own his stamp of approval.

It is also a play about the business of writing and theatre-as-business which Shakespeare was immersed in, and includes famed characters and writers such as decadent homosexual Christopher ‘Kit’ Marlowe and the proprietal Richard Burbage. Northern English adaptor Lee Hall declares his work is all about invention- coming up with stories on the page and the ones we play in life, matching Shakespeare’s own writing which declares:

All the world’s a stage,

And all the men and women merely players;

They have their exits and their entrances;

And one man in his time plays many parts 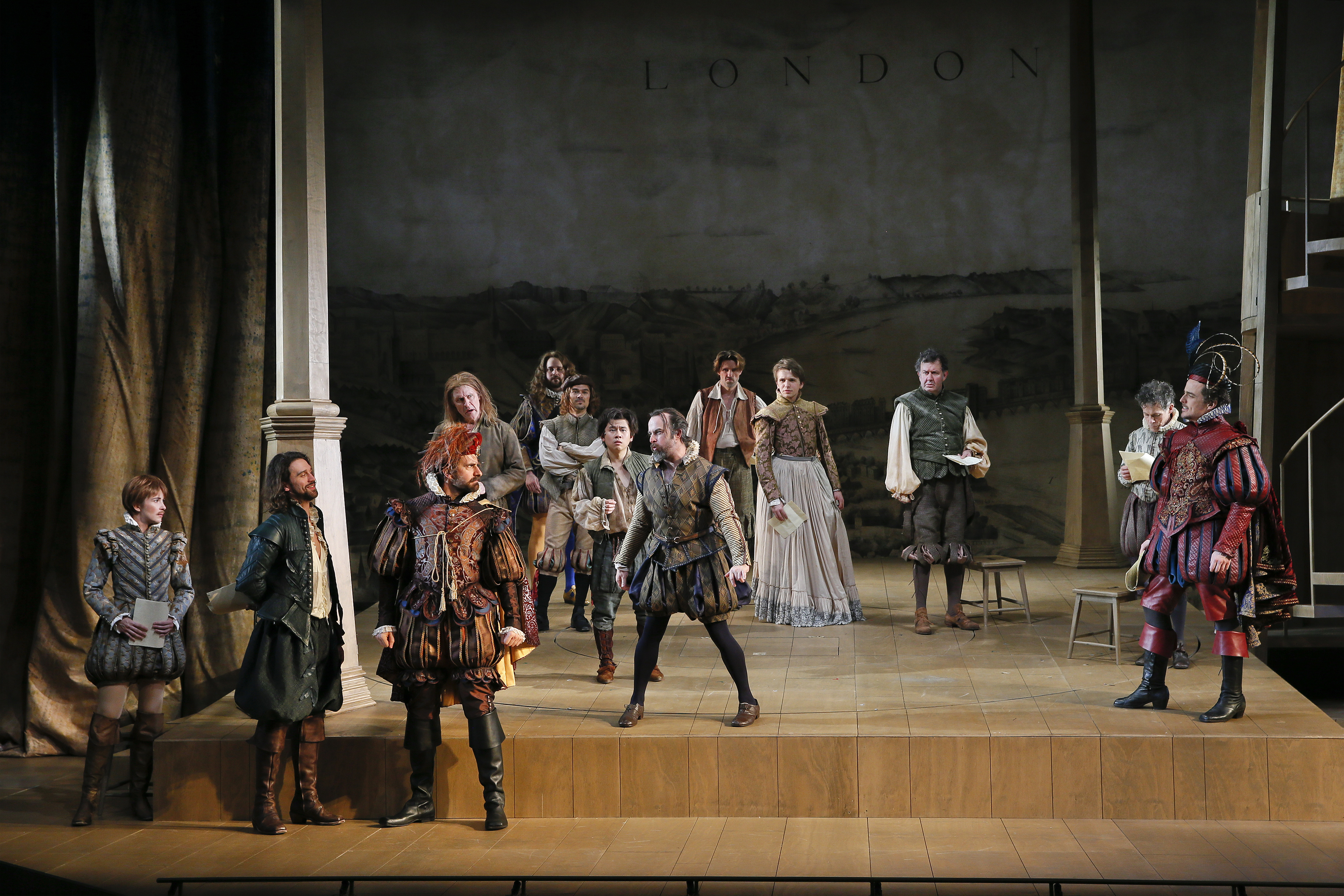 Redolent of the pop up stage platforms of medieval street theatre (likely the site of young Will’s first observed public theatre), Gabriela Tylesova has created a masterpiece of set and costume design as performance of the Elizabethan imaginary. Your jaw will drop as you salivate over colour, fabric, pattern, material, and layers and layers of seeming luxury.

Leads Michael Wahr as successful stage man Will with his female counterpart Claire van der Boom as Viola de Lesseps are charmed lovers and bring strong performance and speech to their roles. Looking the part, you will love to see their flirting and blooming amorousness culminate in early passion and new-love. Laurence Boxhall captures as ready reminder of the prohibition of women on the Elizabethan stage, as the nubile, silent blonde youth who would have played the Juliets. Aljin Abella is remarkable as class clown and upcoming co-playwright, John Webster. Luke Arnold captures the Marlovian spirit as Kit with his bragodoccio, boots and capes while Francis Greenslade as Lord Tilney is suitably foppish and foolish as aristocratic fool. 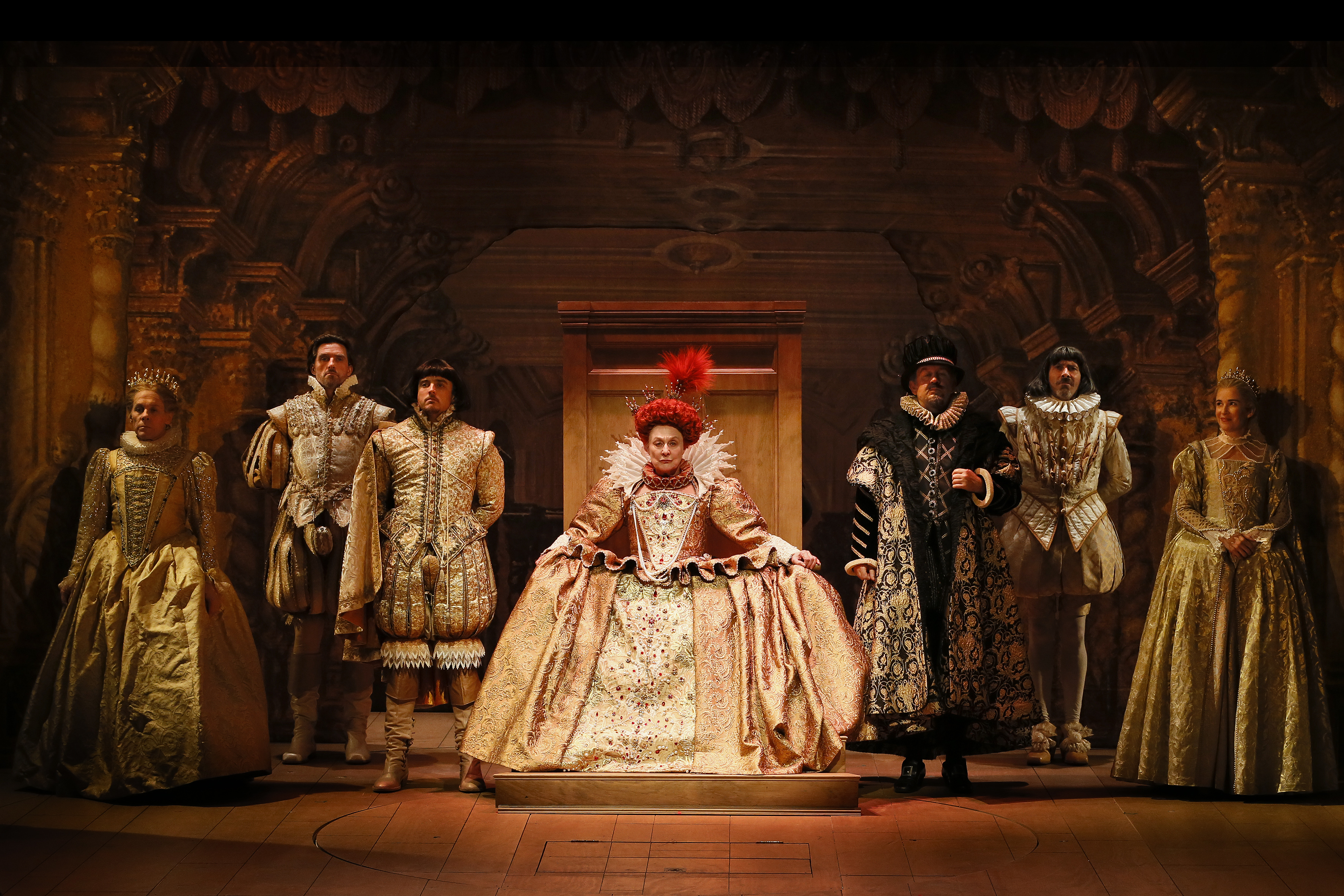 Deidre Rubenstein holding court as Elizabeth I of England.

With live musical and sung interludes from cast and Andrew Kroenert(a fashion Phillips employs with MTC), the atmosphere of real, old English theatrical experience is fully fleshed for us and court and aristocratic dances by Andrew Hallworth are notable. Both combined with Tylesova’s dense costuming, they present unforgettable viewing.

Phillips loves to entertain, not merely educate, and lives up to his reputation as man of the theatre who isn’t afraid to pepper the exuberance of pop culture over high art. Then there is Daisy. A darting flash of fur and vigor, she adds the elemental laughs once found in the Inn Yard stages, or down by the river in the open playhouses beside the rough entertainments of cockpits and bear-baiting. She is the visual punchline which follows the drama and the romance. 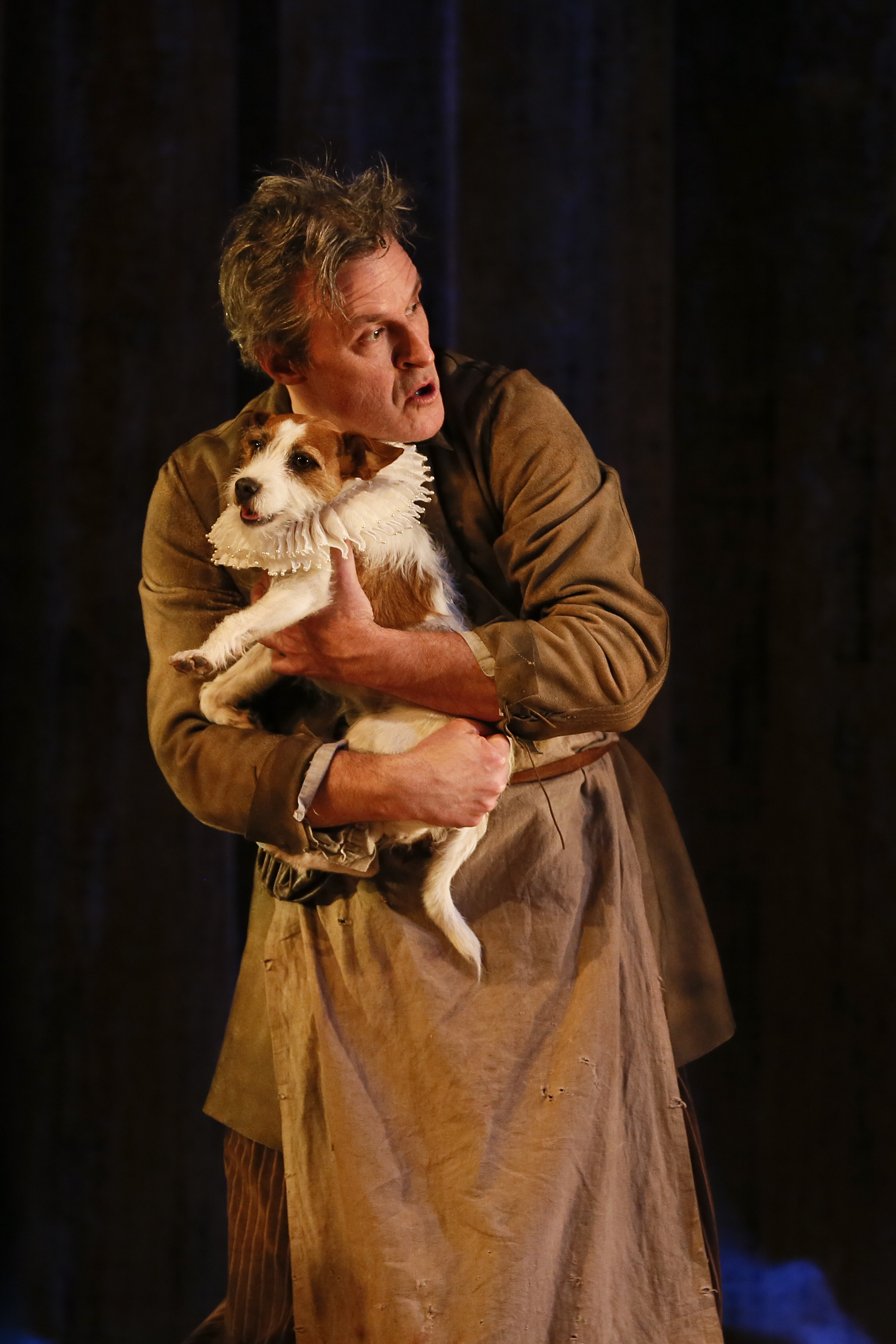 This production is unmissable as theatre-as-event and recreates these romantic spaces in our mind and in literary history.

As it was in the day- yours for the price of a seat.

Ukrainian artistry on show in Lehenda and Cheremosh’s Razom: Two Nations, One Spirit.

What to see at Melbourne International Film Festival 2019