Two dance companies from opposite sides of the world combined to showcase the best of the Ukrainian diaspora spirit in colourful and energetic flair in RAZOM, Two Nations, One Spirit. Melbourne’s own Lehenda Ukrainian Dance Company shared the stage with Canada’s Cheremosh Ukrainian Dance Company and the audience were the excited recipients of their colourful expertise. Celebrating national identity today, by looking to their past, this community create their future with strength.

Under the Artistic Direction of Merited Artist of Ukraine, Melanie Moravski Dechnicz, the Company aims to share the vibrant Ukrainian culture. Based in Melbourne for five years, Lehenda is both company and school which trains the next generation of national dance performers. They have performed at many mainstream festivals, events and community functions such as The Australian Dance Awards, White Night Melbourne, The Piers Festival, Viva Victoria, Pako Festa, The Premier’s Gala Dinner, as well as in Canada and the United States. Canada’s Chermosh is under the artistic direction of Mykola Kanevets, former top teacher in the Ukraine, who has been at the helm since the 1980s, instilling a disciplined focus in his students, evident in their massed dance on stage, notable for its high cohort of male dancers. 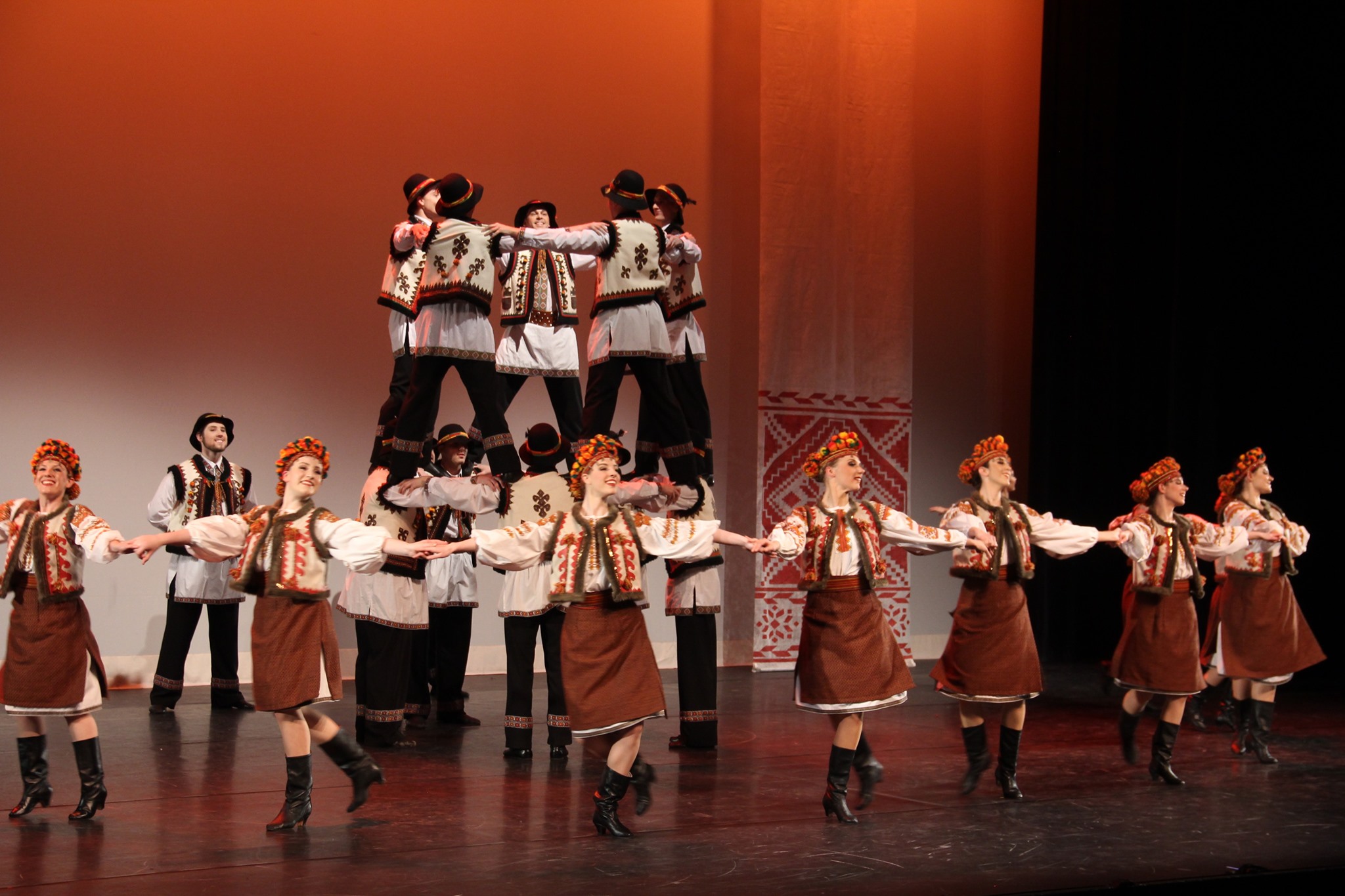 Featuring a combined 80 dancers across both national companies, one is struck by the vitality, complex movements, rich gesturing and strong partner work of Ukrainian dance as well as the peasant and national stories and myths it draws on through its dancerly narratives. For this season, lead danseuses touchingly wore headdresses with that traditional symbol of success and prosperity, the wheat sheaf and baked loaf of bread combined with our local Australian flora of wattle and eucalyptus leaves.

The music is fast and full of energy, inviting audiences to clap along encouragingly as well as stamp their feet in kinesthetic empathy, also part of the cultural tradition. It has rich notes of high pipes, accordion, flute and other traditional instruments, and pierces the listener’s heart, evoking a longing for memory and tradition. 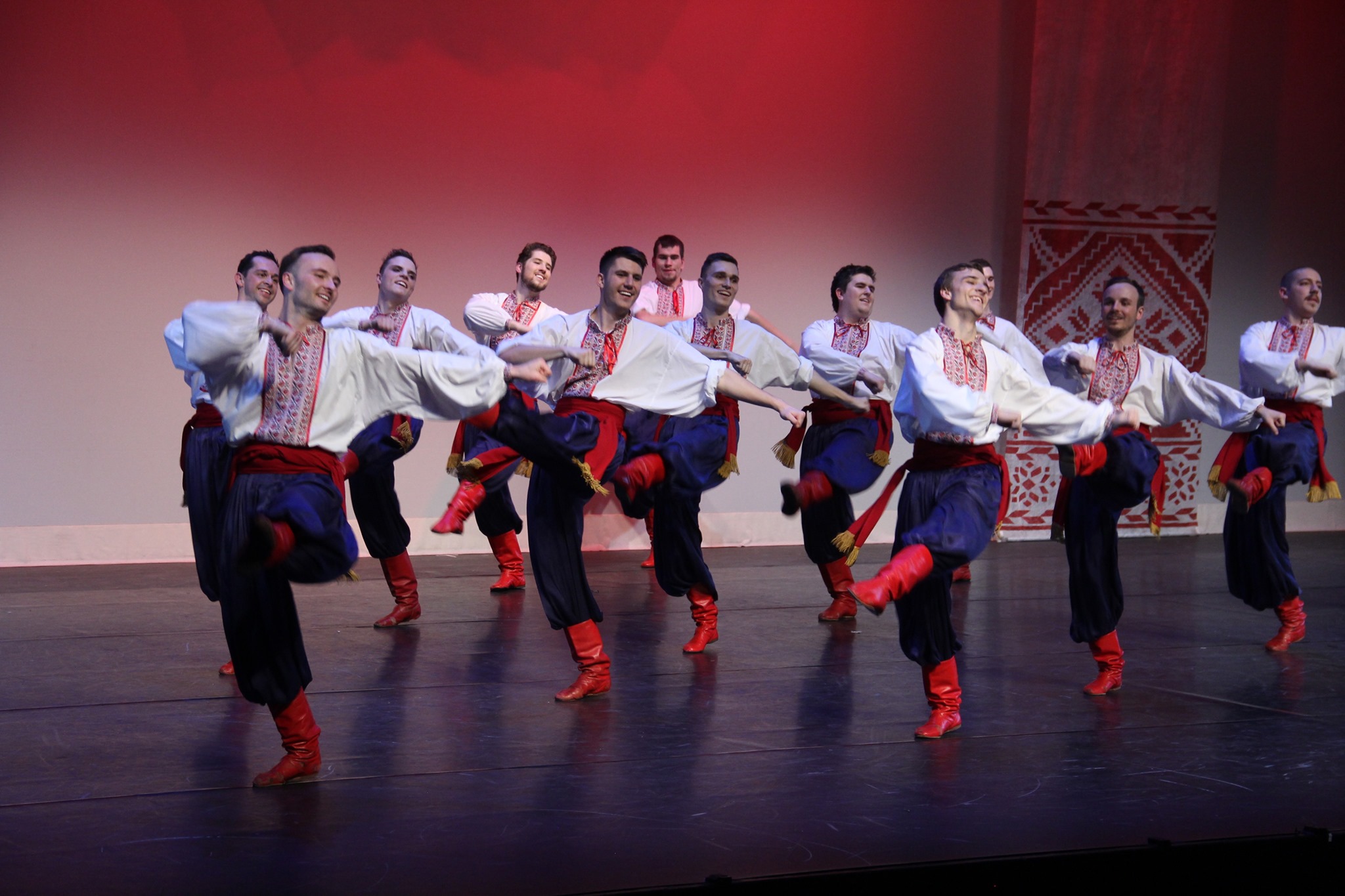 Some dances are for women only, some men alone, with ones combining genders about gaiety, play and coupling. The feel of village and public, social life runs through the movement design and steps, rich in patterns of circles, diagonals, tunnels, and half horseshoe shapes, and sophisticated ensemble work showcasing wheel turns, arm-to-arm circles, and in forward streaming rows. The patterned designs common to their national costumes is repeated in their dance design. Social relationships as well as the natural world and cycles are also subjects.

Costuming was superb, reflecting what must have been countless hours of finger and machine work from the backstage crew. Rich patterning showed on skirts, shirts and fabric, with the famous Ukrainian colour ribbons hanging down the women’s faces. Tightly wrapped skirts and roomy Cossack-like three-quarter pants for the males hovered over boots of every colour, a compulsory accessory for authentic folkloric dance- in red, black, orange, and skin tone. Cheremosh’s colours were unmissably bright, fluorescent with bright lime greens, yellows, reds and electric blues, producing a fluid sea of colour before our eyes as they danced. This vibrant colouring matches the energised physicality of the dance routines as message of a vigorous humanity.

This event was a rousing national moment of unity for the Ukrainian diaspora, and rich cultural gift to Australian audiences as a highly creative expression of identity.

Follow the company here, or join classes.  You can purchase DVD dances from Cheremosh.

Disclosure: The Plus Ones were guests of Lehenda Ukrainian Dance Company.

Come From Away – An unmissable new musical arrives in Melbourne