Words uttered in 1928 ring clear in the cavernous space of fortyfivedownstairs where you will find yourself rethinking your life from the get go. First spoken to a group of female students in one of the first British women-only institutions of higher education, they address the topic ‘Women and Fiction’. Co-presented with Carlton’s famed birthplace of original theatre, La Mama Theatre, this is a superb reprisal of Sentient Theatre’s sold-out 2016 adaptation of Woolf’s seminal feminist essay, A Room Of One’s Own. A charmed cast artistically render real this important exploration of core ideas on women’s presence (and absence) in culture.

This is a brief intimate wander inside the mind of one of the modern world’s most fascinating thinkers, creatively and philosophically, and an opportunity you will not want to miss if you are a student of English literature, social politics, a Bloomsbury fan, or lover of the rich theatre Melbourne is famous for producing.

Adapted and Directed by Peta Hanrahan, a student of Lecoq and VCA Directing graduate, her work is centres the actors’ journey. The work underwent initial creative development with four VCA student actors and in 2013 she was the recipient of Arts Victoria’s Most Outstanding Graduate. A founding member of Sentient Theatre,  she is keen to bring humanitarian narratives to the stage. 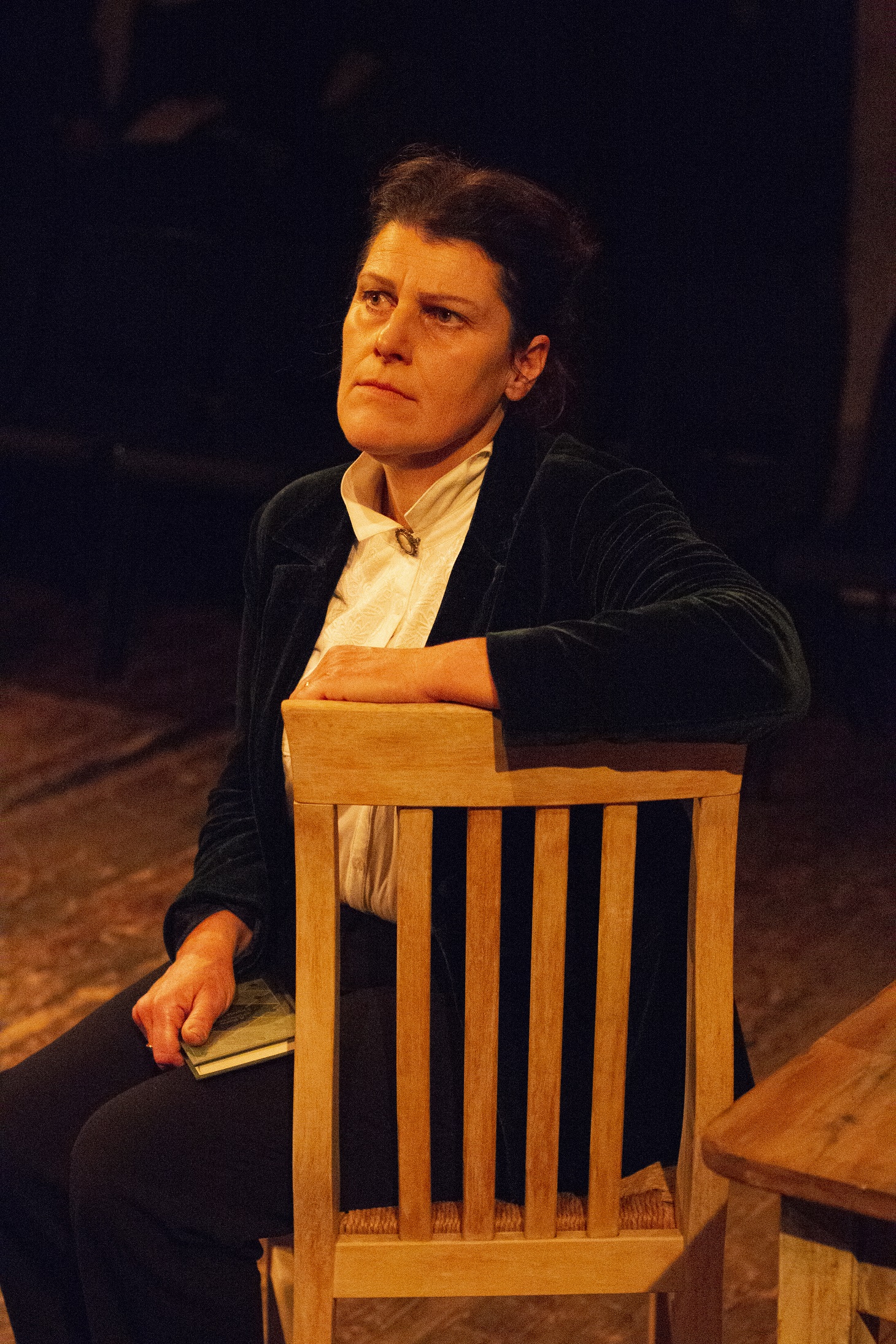 Anthea Davis as The Questioner

Played by four characters, they animate the writer’s conversation with herself, around the ideas of women’s access to the academy and literature, to literacy, agency, rights, and the qualities of fiction v. fact. Anthea Davis plays Actor I: The Questioner, presenting physically as an image of Woolf late in her career, dressed in Edwardian white shirt, manly academic’s jacket, with her parted hair atop her drawn visage, the aristocratic writer, who came from wealth but wanted for so much in the world where she saw so much missing. Davis appears the very embodiment of the great writer and has presence and depth which make you feel you are really with Virginia in her study, at her craft. She captures this marvellous academic theoretician magnificently.

Two other female presences contrast with the troubled writer. Marissa O’Reilly is  Actor II: The Diplomat, with honeyed voice and imploring reflections, she comes dressed in floral summer dress with cascading red-blonde hair falling down her back, delicately feminine. Anna Kennedy, in pants, plays Actor III: The Sceptic, speaking bluntly and boldly, a more recognisable 20th century ‘modern’ voice. Tasmania’s Jackson Trickett reprises his 2016 role as Actor IV: The World, outwardly focussed, with perfect poised and attenuated diction and delivery, and a steady glance to audience gilding his lines. 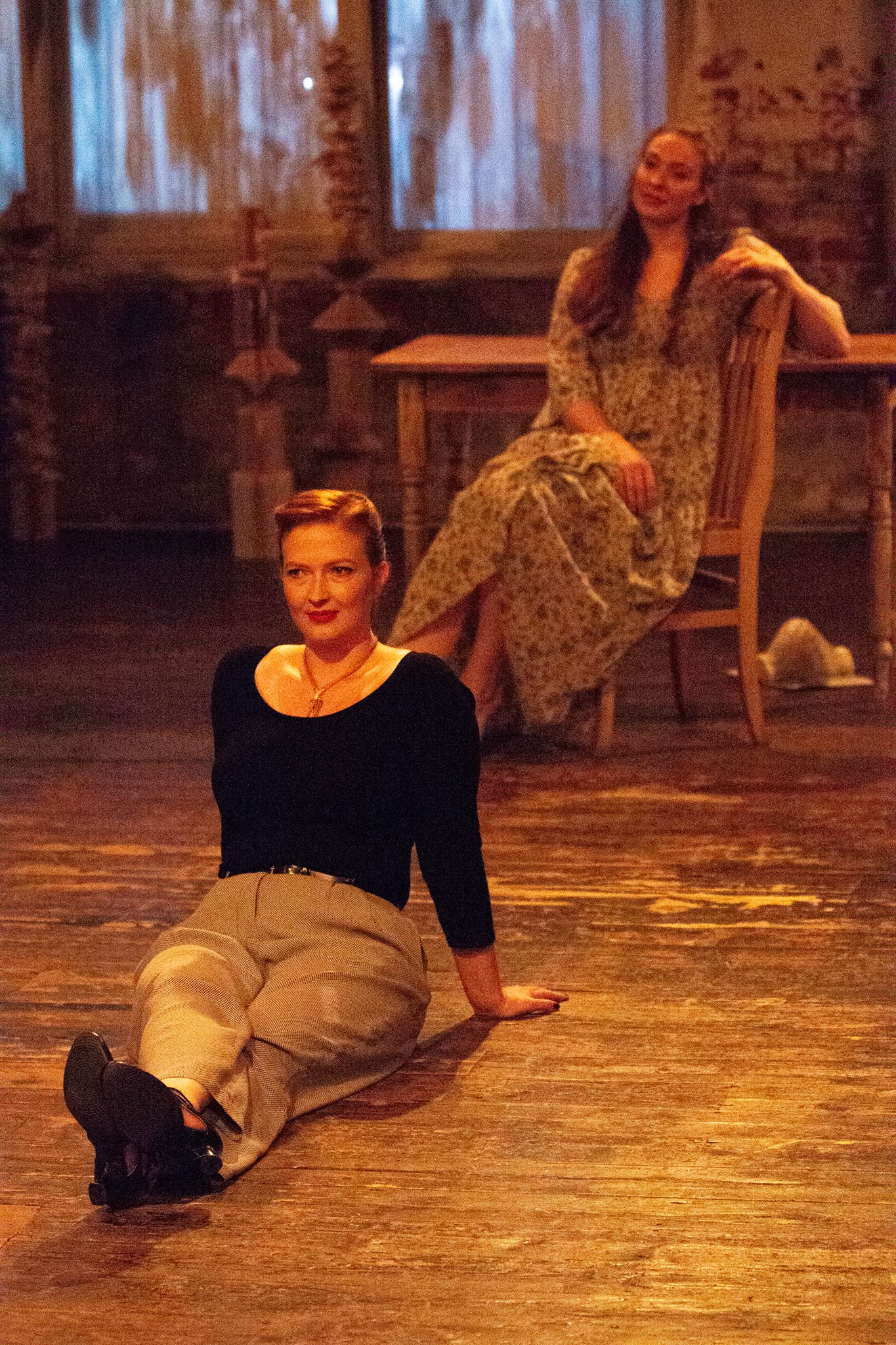 Attending this play, you will discover all the gems of Woolf’s inventions such as her hypothesis of a female Shakespeare, where she supposes what Shakespeare’s sister’s life, if a writer, might have been like by comparison to her brother’s one of opportunity, geographical amenity, and career development. She examines history and the absence of women’s lives therein, the volume of men’s writing about women(and the female gender’s concomitant lack of interest in her opposite), and of women’s writing requiring a space in which to think, research and create, with a lock to exclude interruption from everyday demands (such as the unpaid tasks of raising children or care giving), and of the question of money, querying the influence of poverty on women writing. So many bright questions populate this essay and state so simply ideas with only complex answers.

The costumes are subtle and understated, not overcrowding the spoken word or ideas. Set design shows again the brilliant creative visioning of designer Dagmara Gieysztor who hangs scrunched torn pages from novels along long thin cascading threads. With many mentions of the university library as marker of Knowledge within the play (and likely subconscious reflection to the one she and her sister famously accessed as the home-educated daughters of Sir Leslie Stephen), these descend from the roof like literary DNA to which Woolf herself was heir and inscriber to. Subtly spotlit by Paul Lim in a moderately burning gold hue, they glow in the background, behind the action, like a spiel of thoughts or  chains of literary signification. This play, after all, is based on a book of ideas. If knowledge is that which is in a book, and universal access to education is not shared by all females, what precisely is reified by ideas which exclude women? 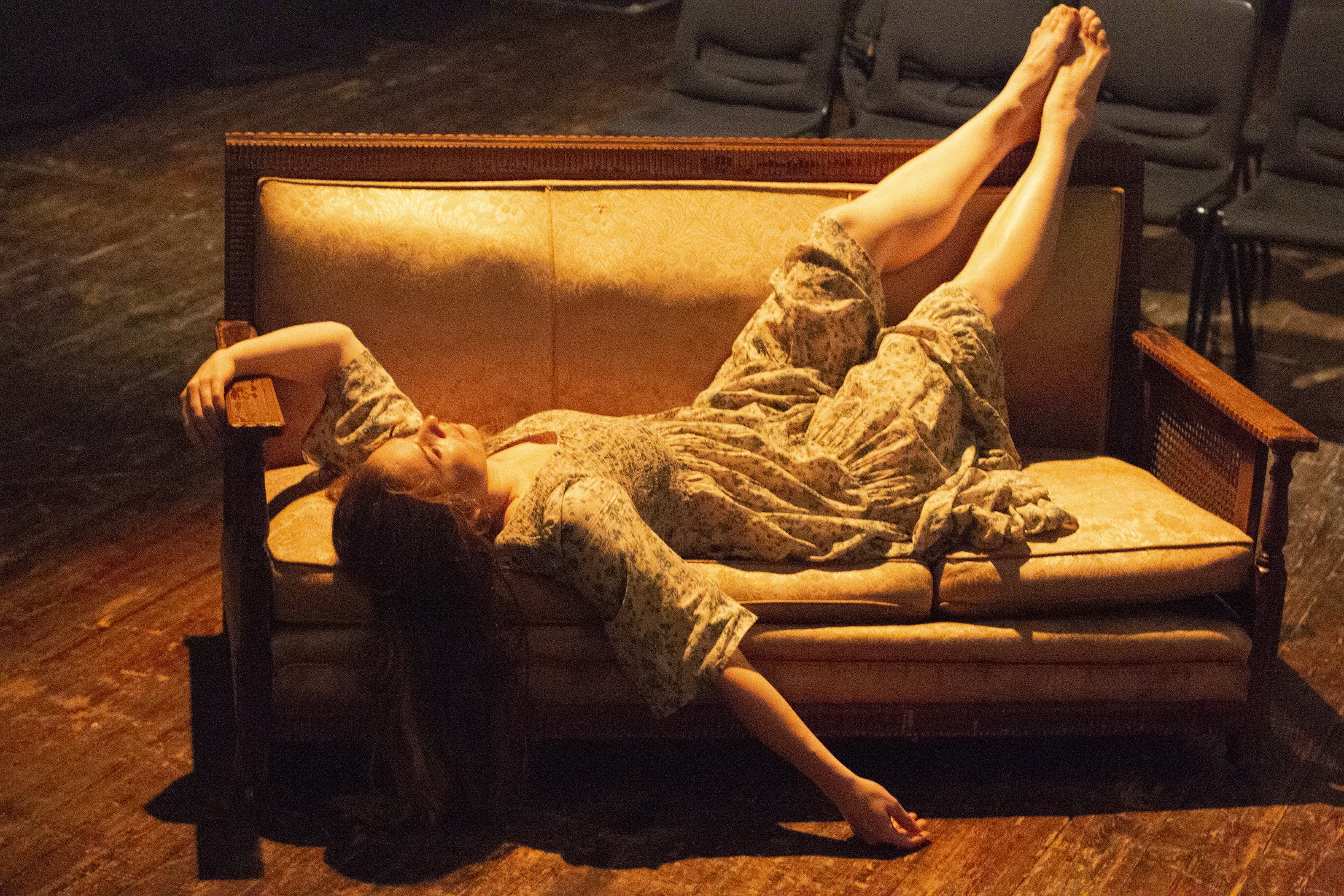 Hanrahan declares she never tires of hearing Woolf’s ideas spoken aloud, as they would have been at her guest lecture, and it was a revelation for me, my guest, and the whole audience. There is nothing like lifting lines from the pages of a book and having a cast bring them to life and this is the indulgence of this quality enlivening. Reflecting the questing intention of host The Questioner, the pace of text delivery is moderate, measured, meaningful as the writer ponders, enquires, and meditates. Ideas so pure and clear, this cast let the concepts trip melodically from the tongue and they linger in the air- and in our minds- after utterance. 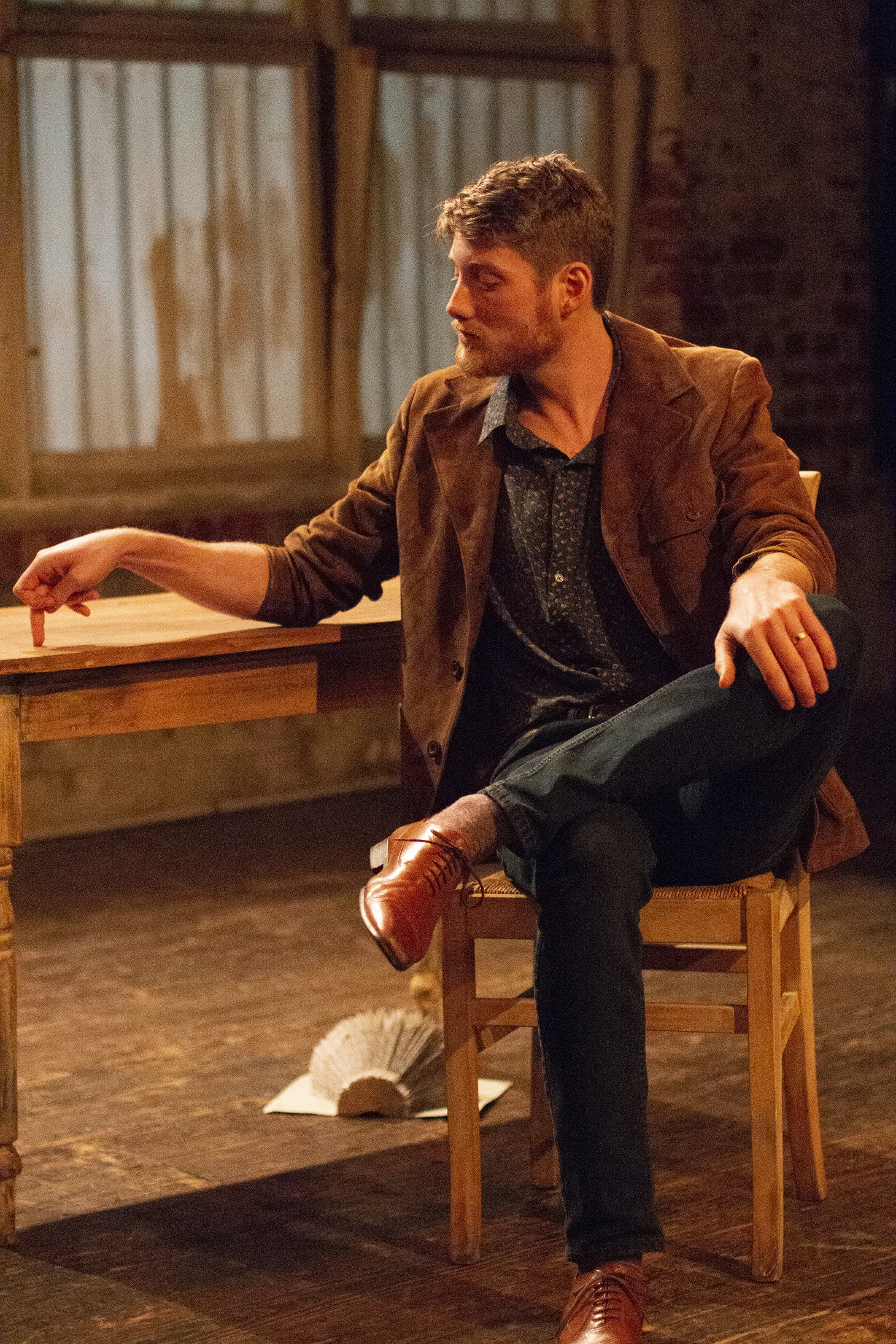 This is a work which honours Woolf’s epistle and her being, her role in the British literary canon, as feminist historian, and the rich jewels that are contained within her entire oeuvre, sadly cut tragically short too early in her life. Theatrically, and in writing, this beauteous jewel of a work valorises her mind. It’s also a credit to Hanrahan’s visionary and creative instinct to revive this near century old polemic for modern ears. Get your 21st century refresher on core feminist values delivered better than any You Tube video, or app.

This production so esteemed, many nights have sold out. Book quickly to miss this once in a lifetime showcase of the ideas of a female genius.

The venue is accessible at booking.

This production so locally esteemed, many nights have sold out. Book quickly to not miss this once in a lifetime showcase of the ideas of a female genius.

The venue is accessible at booking.

Come From Away – An unmissable new musical arrives in Melbourne