Shakespearean specialist national treasure, Bell Shakespeare has Associate Director James Evans in the drivers seat on their latest national touring play, Much Ado About Nothing and what fun is to be had in this gender roles romp he takes us for a spin in.

The genre is romantic comedy with the complex marriage-oriented ‘trick’ plotline but inside the insane comedy is a dark conflict that drives the play into tragedy with false accusation of infidelity resulting in a young woman’s uncalled for death, misogny a key player on the stage. False seductions, masquerade balls and mix ups, backroom plotting, machismo and bravado are all on show here with two fools, Dogberry and Verges, inserted just for laughs. This is fun for the whole family and suitable for all ages. 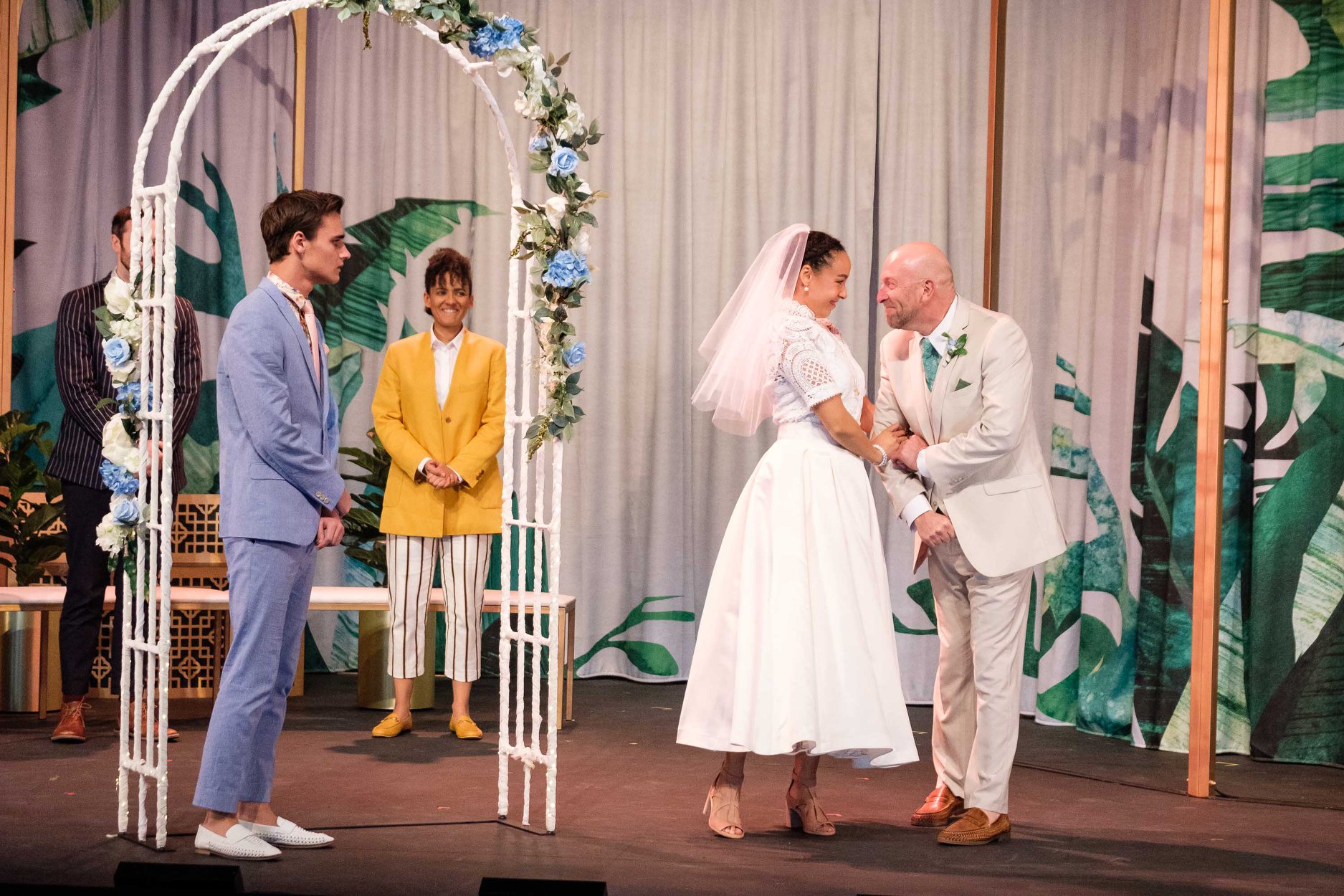 The nuptials of Hero and Claudio.

Strong romantic leads who are boxing opposites, showing Shakespeare’s hallmark lovers who go from hate-to-love: great lines full of repartee and innuendo; scheming onlookers and devil’s advocates; crowd scenes and scheming social networks as bad as any seen on reality tv; bawdy, fools, and happenings culminating in a(sort of) happy ending. As ever with Bell, we get superb vocal and movement coaching from Nigel Poulton and Jess Chambers backed but quirky modern presentations via 1990s electro-mod costume and dress from Pip Runciman. The actors position themselves meaningfully in the space, their orientation and play telling much of the story in any given scene. 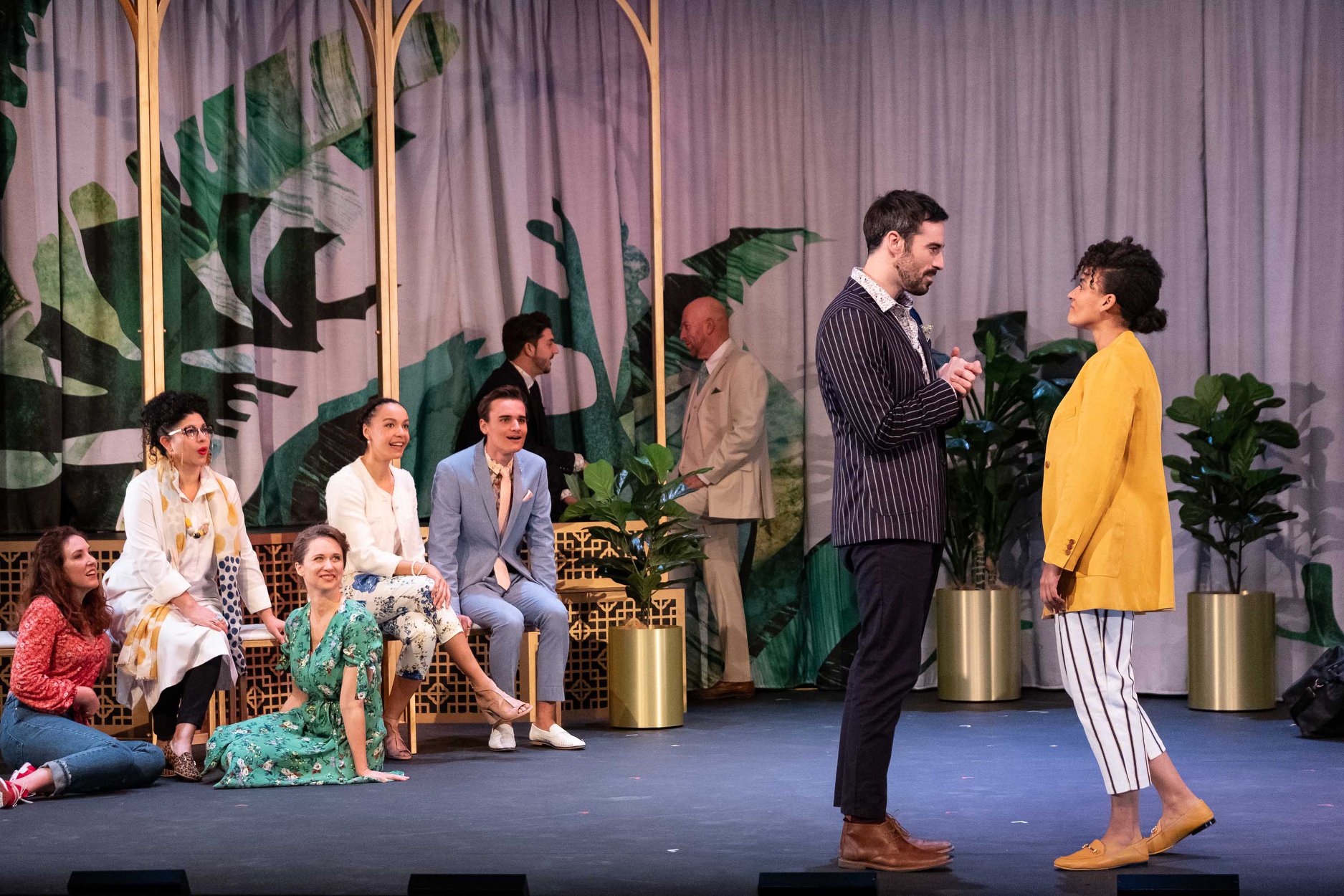 As in the tradition of Shakespearean theatrical skill, the actors speak the language trippingly on the tongue[Hamlet]- they get the witty and pointed lines out as fast as a Twitter feed. This is what modern audiences desire- as did Globe audiences in the late 1590s want bawdy that spoke to them. The bard wrote self-consciously for entertainment with box office success and this play has many elements that will delight, revealing his formulae.

Amidst all this late 16th century chaos, stands the calm Beatrice, as if outside the play, off stage. Highly regarded theatre actress Zindzi Okenyo as Beatrice is a standout. Her disparaging feminist one-liners, and her superb voice and bodily timing emphasise her characters’ divine independence, while she quietly takes space, entirely modern in both speech and presence. See her and see a modern diva created 421 years ago. Her assertions undermine and make fun of the folly of men in groups and their posturing to prove position. Danny Ball as Don Pedro coolly reveals the inherent cruelty and unaccountability within the macho matchmaker he plays. 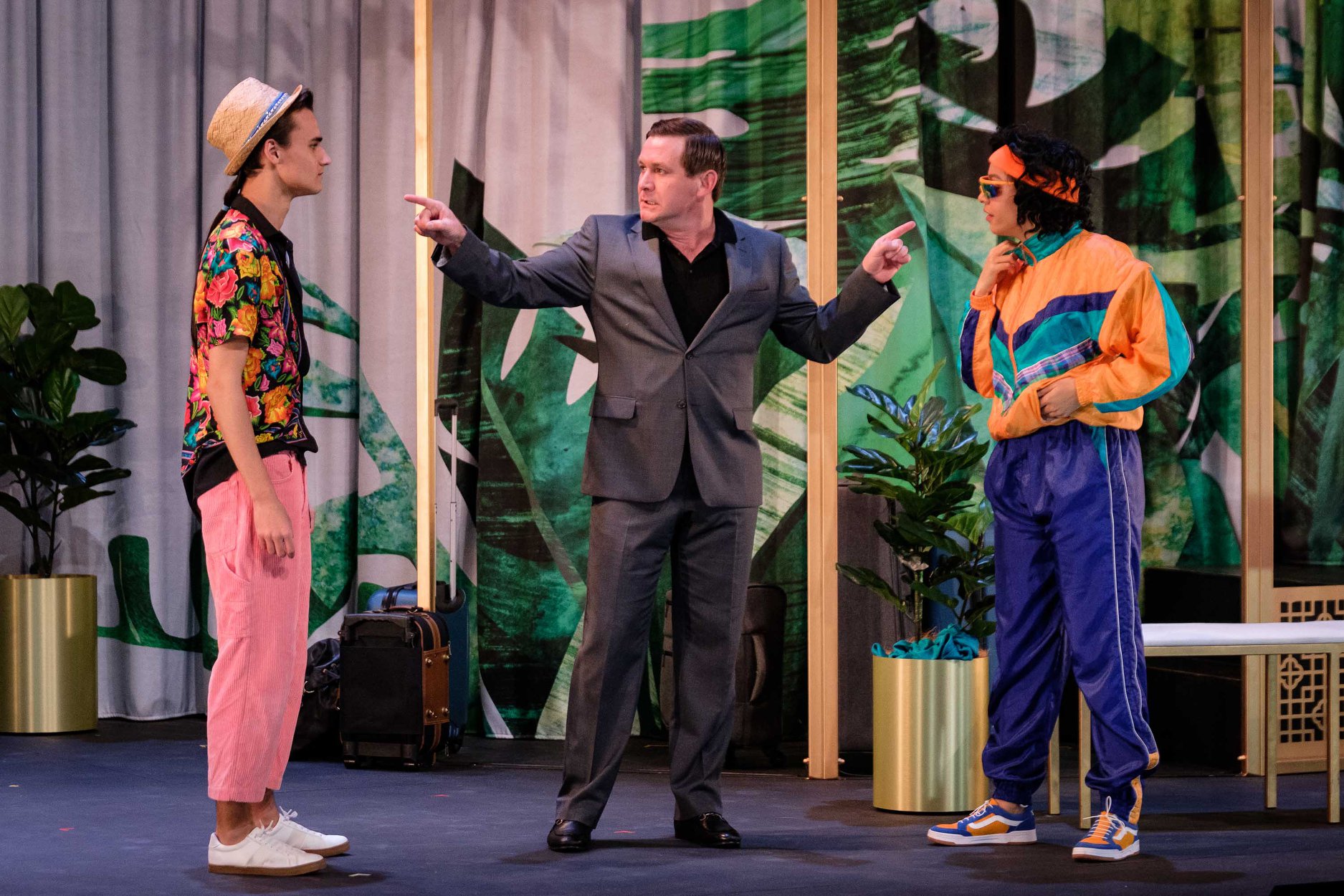 Schemer Don John(Paul Reichstein) between Will McDonald as Borachio and Vivienne Awosoga as Conrade.

Duncan Ragg as her paramour, Benedick, shows off good clowning notably across a landscape scene that sees him seeking cover via foliage and lawn. Young Will McDonald as boy posse crew Claudio/Borachio resembles the ultimate Renaissance actor- with full physical buoyancy and flex reminiscent of the tumbler/juggler/joker and knave, with tricks and whiles to capture any crowd. There is so much to SEE through Bell shows- the transition into modern theatre is also on display for your elucidation.

First time to Shakespeare? This is light fun that has all the Globe goodies. Get your skates on for this very brief annual visit to our riverside city theatre and get a taste of the Bard. 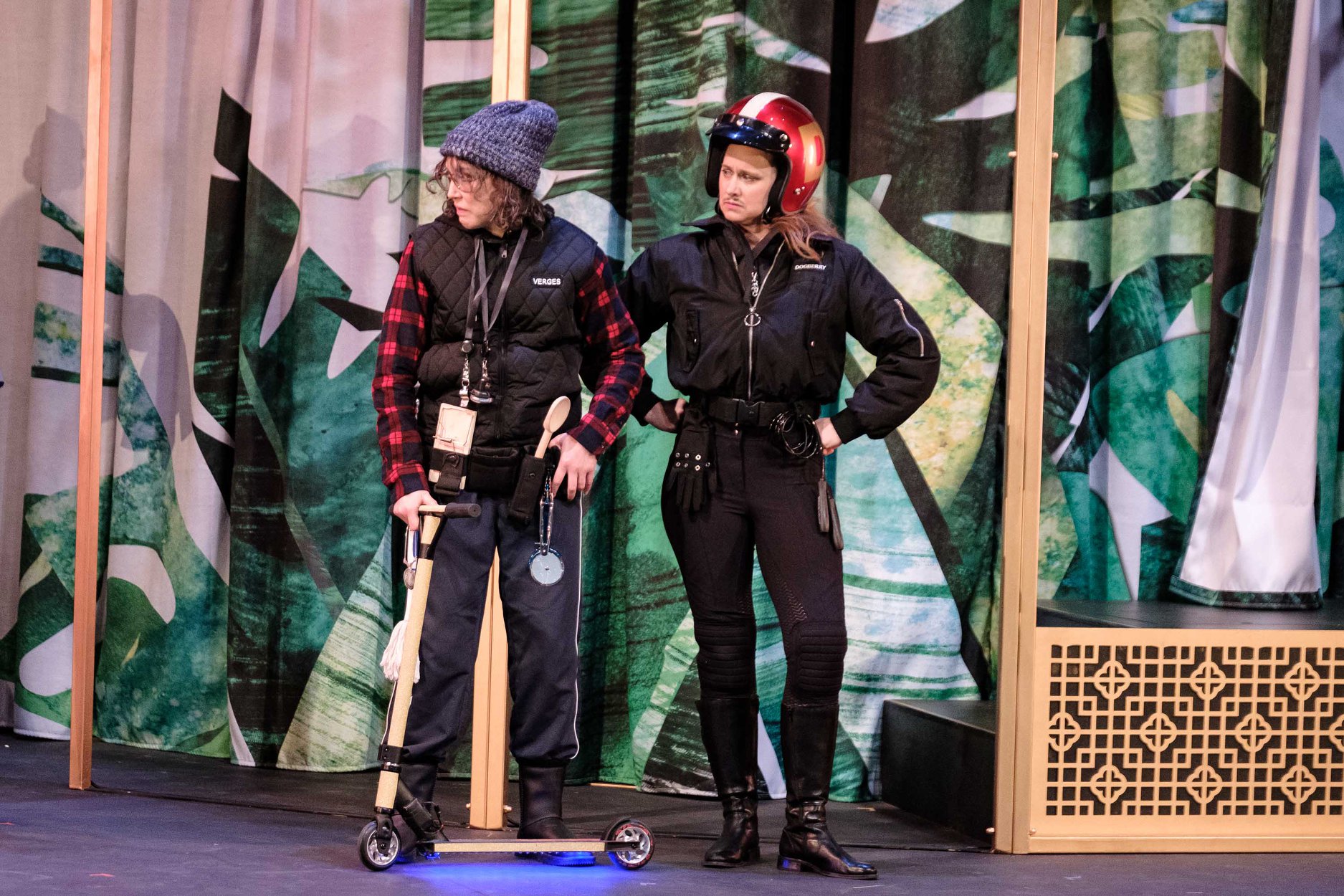 Venues are accessible with various Accessible Showings. Good for ages 13+.

Bacchae-done-female, as you’ve never seen it before, by MUST at La Mama