As my partner and I walked into the venue to watch Wunderage, we were struck by an unusual welcome: this is an immersive show, please wander around. With no seats, Wunderage takes the audience right to the centre of the action. The Meat Market has been transformed into a colourful plaza with wonders hidden in plain sight: tightropes, columns and huge rocks working as counterweights rise around you, promising great things are about to happen.

“This show invites people to explore and be adventurous – especially as there are no seats that often create a barrier to the performance. We want our audience to step into the unknown with us and just wonder,” said Artistic Director, Rob Tannion.

The show started with a ‘time pole’. One performer swinged a huge pole around while the rest of the cast jumped and danced their way above, below and around it – playing. During the next hour, the cast of seven skilful performers defied the barriers imposed by gravity and took their equilibrium skills and strength (physical and mental) to the limit – testing safety and with it, life itself. In addition to the visually mesmerizing set, the place is absorbed in a live musical soundscape of drums, banjo, guitar, piano and vocals that transport you through time and create tension and ease as the acts flow one after another. 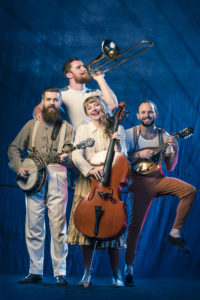 As time ticked, the feats grew bolder. A man crossed a tightrope held four meters high in a bicycle, another held the weight of a pole on in his shoulders – while another was climbing it. A woman jumped her way through a tightrope – in ballet shoes and high heels. 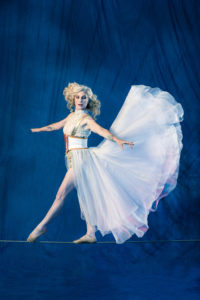 What struck me most throughout the whole show was the palpable level of trust that they had between each other, the evident camaraderie that encouraged each performer to push harder, go further and try again.

Company 2 Director, Chelsea McGuffin, explains the rationale behind the show: “People often walk a delicate tightrope between who they are and who they might become and from this tension springs Wunderage.”

Then it dawned on me, the only way we can get far is by creating a space like this: a space that is safe – so safe that we dare to fly.

– Lourdes
Lourdes Zamanillo is a Melbourne-infatuated journalist. Originally from Mexico, she loves words, travelling, and (above all) feeling surprised.

Disclosure: The Plus Ones were invited guests of Starling Communications.
Images credit: Rob Blackburn

View all posts by lourdeszamanillo →