If music be the food of love, play on! So said Will in his classic celebratory play Twelfth Night and this marvellous tale of mistaken identity, secrets, and pretence offer up so much fun in the park from a ribald team of players. Written in 1601 for the Court of King James I to celebrate the end of the Christmas season, the play includes musical interludes, comedy, and riotous disorder. If you want to experience the Bard as he might have been performed by a troupe of 1600s travelling players (such as the younger writer/actor himself), get down to see this fantastic outdoor version.

The story owes a debt to the medieval tradition of Saturnalia, where the social order is reversed and manners turned upside down, and the stock character types of the Commedia dell’arte. We have a coming together of misrule and madness and the comedy comes from the inversions. Women play men falling in love with the opposite sex, aristocrats are clowns, servants plot against their employers, with love the only uniting truth. 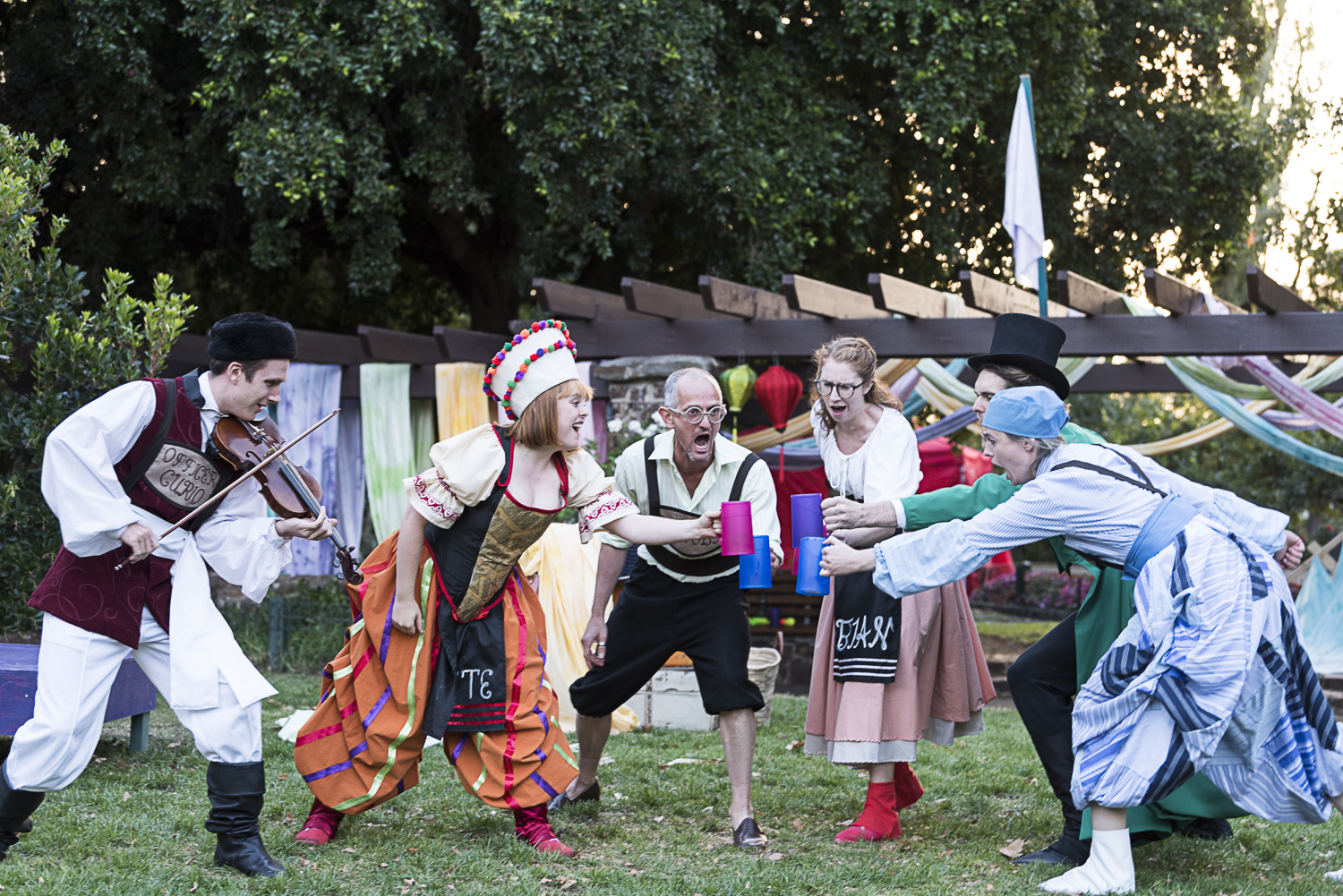 The team in charge are strong. Director Paul Robertson, alongside the musical direction of Alec Steedman and buoyant choreography of John Reed, offer here a joyous romp through a famed narrative set in a Melburnia, of male and female twins shipwrecked at sea, rescued, raised and later reunited under the Duke of Illyria, who falls in love with one (Viola) playing a male (Cesario). He sends her as emissary for his heart to a wealthy Countess Olivia but she falls for him(her). Later, when lost sibling Sebastian returns, Olivia asks for his hand in marriage. A sub-plot speaks to contemporary angst with its comic depiction of Malvolio, Olivia’s Steward, the killjoy Puritan who has romantic tricks worked upon him, making him the story’s fool in his yellow, cross-gartered tights and fake love letters.

A basic plotline of suiting and romance, presentation and pretence is well rendered with celebratory aplomb. Supported by innovative eye-popping costuming from Rhiannon Irving, here supervised by Constance Lewis, the comedy is underlined, literally, by the cloth the cast sport. Character names emblazoned across chests, the dresses, pants, aprons, braces, coats, cloaks, boots, and more all support the humorous take MSC present in all their energised outdoor shows. The constant movement of cast all about the playing area on the grass creates energy, with entrances and exits occurring throughout. Performed open air, it more resembles real life, as if these characters were people like us, in the park, part of a story. Poodle owners watched on. 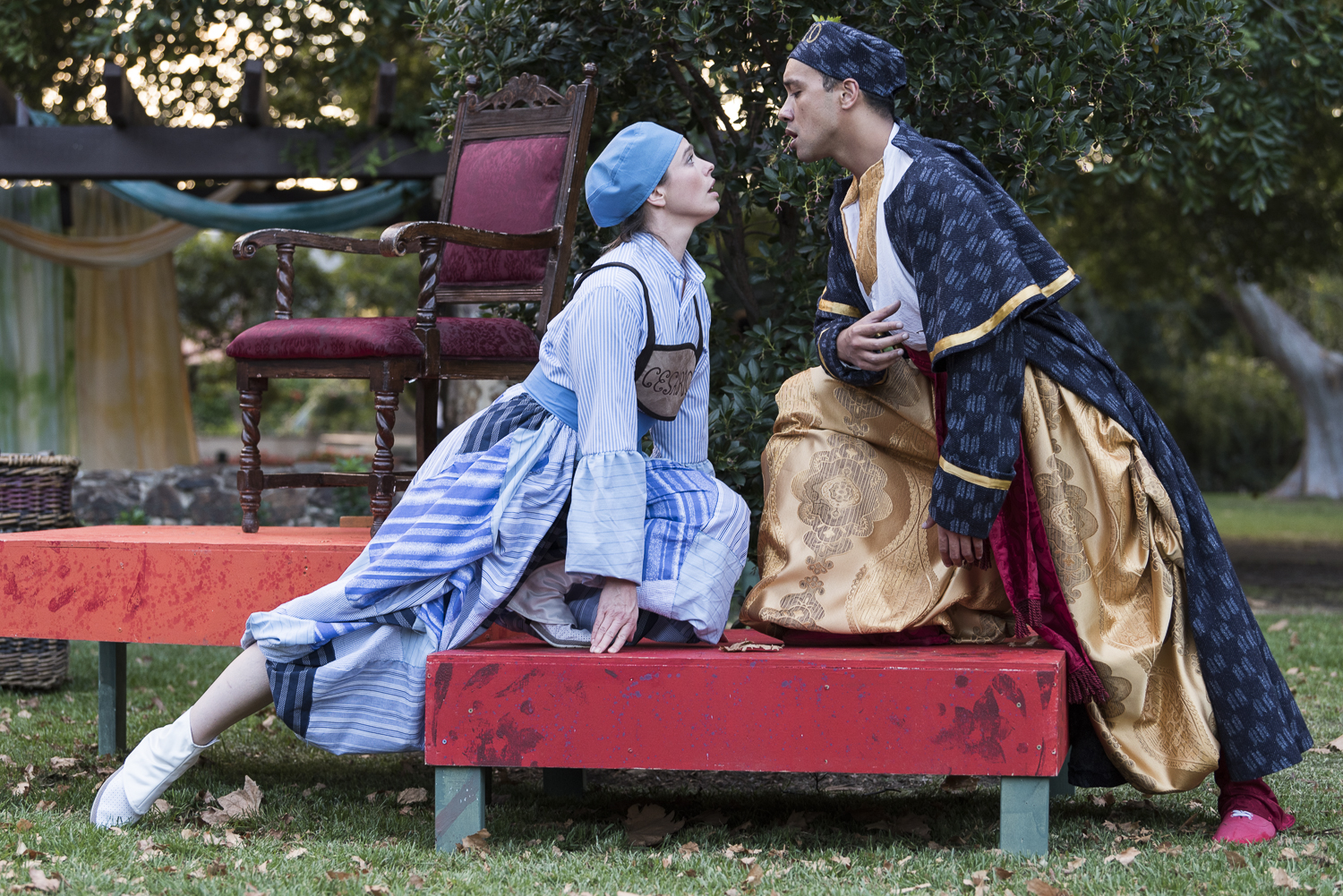 This is not a lazy Laurence Olivier men-in-tights approximation of the play – it’s an energised sandpit of furious fun and you are seated as if the King with box seat views of the madcap action. The strength of this company is in its playful risk-taking, clever contemporary renderings of ancient characters, training ground for lovers of the Bard’s style, and for their celebration of his words. The lines are so funny you will split your sides and watch apace as if at the race track of good humour. The cast, all excellent actors, work furiously and dynamically, giving 110% to their creations. Shakespearean live performance is hard traffic, and you watch experts here match fit and punching.

There’s so much to enjoy in the shows of Melbourne Shakespeare Company, unlike any other company in the country. Under the contemporary creative vision of the credentialed British trained Jennifer Sarah Dean, you get versions of these plays cooked right for  the present day. Her wacky, slapstick presentations of the text insert slang, pop music songs, innuendo, and bawdy all in the truest style of Elizabethan theatre. With fabulous dancing and costuming to support the vision, it’s like watching a bunch of animated characters comment on the social mores of the day. Her characters are the subtitles to the official storyline, an intrinsic aspect of all popular theatre of which the Bard was a Master, speaking direct to his audience, passing comment on live contemporary affairs across all social classes. 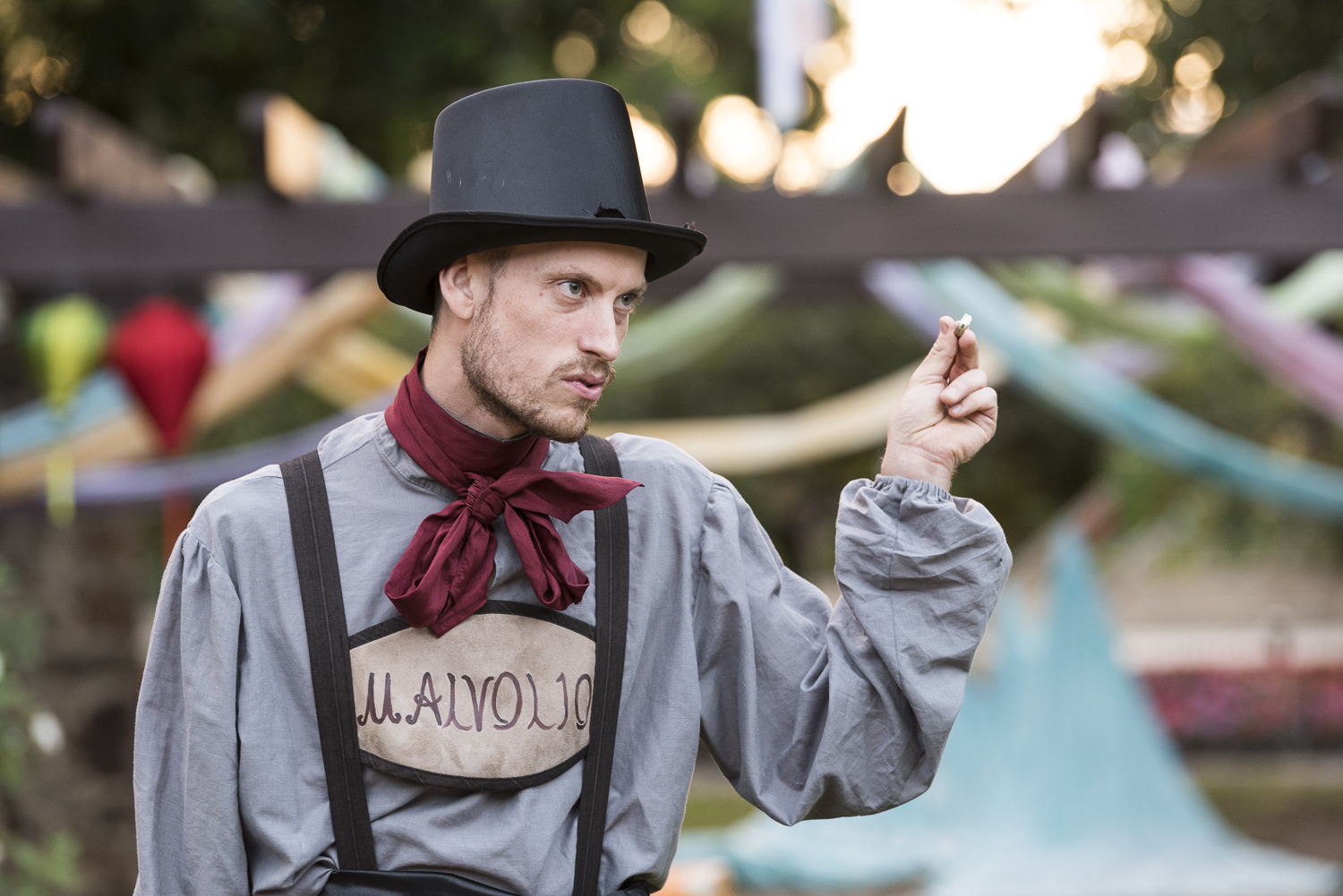 These cast are always ones-to-watch who will grace big screens and stages as their careers build. Highlights for me included Anthony Craig as silly Captain Valentine with a natural comic’s demeanour. The fabulous acrobatic tree comedy from Johnathan Peck as Malvolio, or in his bright yellow tights,  had me musing on other sanctimonious fools local to our parts such as Tony Abbott at the bike in his budgie smugglers. Themes so old and yet so current.

Sami Obama fits his role perfectly as Duke Orsino, employing good bodily expression, gesture and voice to inspire respect. Kala Gare’s Olivia is bossy, strident,  and a well marked and good opposite to him. Old hands Annabelle Tudor as Maria and the wonderful May Jasper as famous bawd Sir Toby Belch, move steadily further into their physicialised clownwork, with Nicola Bowman as singing fool Feste bringing her quick timing and melodious vocals. Newcomers Saxon Gray as Sebastian had strong voice, and Mitch Ralston is unmissable as Sir Andrew Aguecheek, played like an Aussie AFL football draftee-cum-idiot, this player relishes every moment he’s in a scene.

It’s the minute references and ironic asides like these which makes Melbourne Shakespeare Company one to watch to see these English classics as they were intended- sure fire hits to an audience with themes they readily recognised, and to entertain.

To understand the Bard, you must see their productions! BYO food, drinks, seats or rugs to relax and enjoy with on the eve of our city’s summer.

Disclosure: The Plus Ones were guests of Melbourne Shakespeare Company.

Modern Chinese Degustations for both Vegans and Meat Eaters

A Night at the Natural History Bar