Queensland Ballet came to town with a bejewelled showcase of superb choreography, exquisite concept development, quality execution, and superlative costumes and sets in a reprisal of their acclaimed 2016 co-production with Royal New Zealand Ballet, A Midsummer Night’s Dream. The show had an audience of balletomanes and national dance greats offer a standing ovation and the show will tour four cities in China throughout November. This production is top quality. Entirely captivating, the choreography, design and construction, combined with excellent performances, make this show the complete theatrical experience. It did not disappoint on any level, setting a high benchmark for ballet satisfying modern audiences.

Walking into the theatre, your jaw drops as the lights fade and you spy the set. Like 3D-Disney, it’s something out of a dream made real. Giant mushrooms, hanging vines as air-bridge, cabins and nooks are all colour-lit in Kendall Smith’s concoction of speckled fluorescent blue and lime green, sparkling in the evening light, edged by a gathering of  light globules as flower stems, resembling lava lamps, the moon and stars making visible the pranks that ensue. 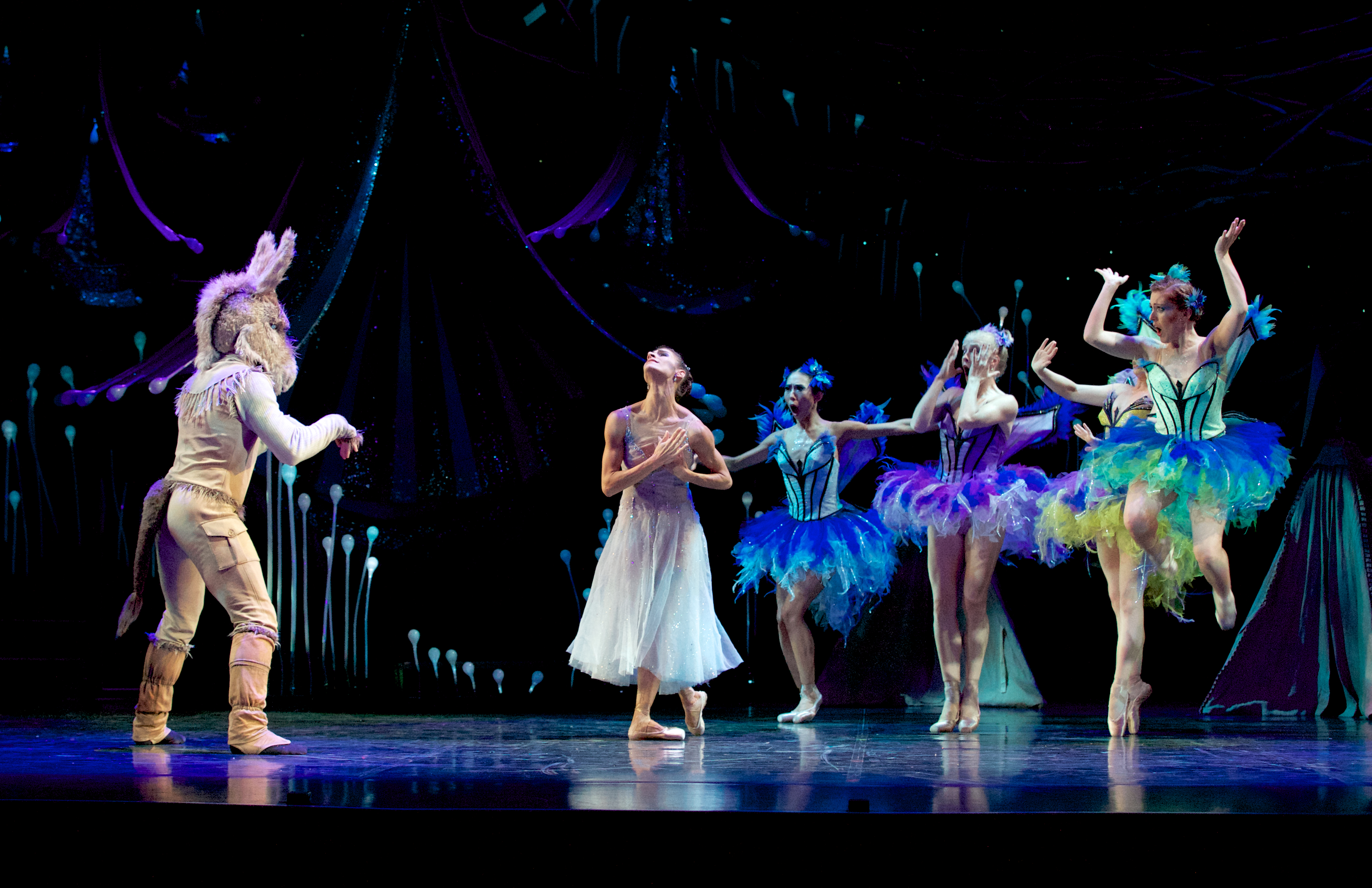 Laura Hidalgo as Queen Titania, with her fairies, falls in love with Bottom.

Shakespeare’s playful tale set deep in the fairy dell of the forest tells of a sparring fairy King and Queen(Oberon and Titania), one cheeky apprentice, Puck, who spreads tricks and spells amongst both magical and human creatures present, creating havoc, misplaced amours (one, with a donkey named Bottom), and of a stray Changeling boy, who the King and Queen fight for ownership of. One evening, their world is invaded by human visitors, two sets of lovers with rustic mates (reminiscent of the play’s Mechanicals) and we witness the mayhem which ensues as the humans descend into the fairy domain. This play harks back to the Masques held at the English Court, to mythological types, and to the rights of passage in a journey to divine love. Composed in 1595/6, this story holds an eternal magic and whimsy, replete with themes of romantic love and vanitas, expectation and folly, social hierarchies, freedom and liberation, and the hand Universal Forces play in the lives of beings, animal, metaphysical, or human.

Despite all other elements being of the highest order, the choreography, movement design, placement, rhythm, pas de deux and ensemble scenes, which embraced a literary origin and references, reigns supreme.Artistic Associate Liam Scarlett, also Artist-In-Residence at Britain’s The Royal Ballet, is the craftsman who produced this night of wonder, rehearsing his cast and spreading magical moves like balletic fairy dust all across the stage. His movements tells stories and there is not one area on the stage space which he does not mindfully occupy. He wants this work to entice all members of the audience, across all ages and types, as did Shakespeare his story. 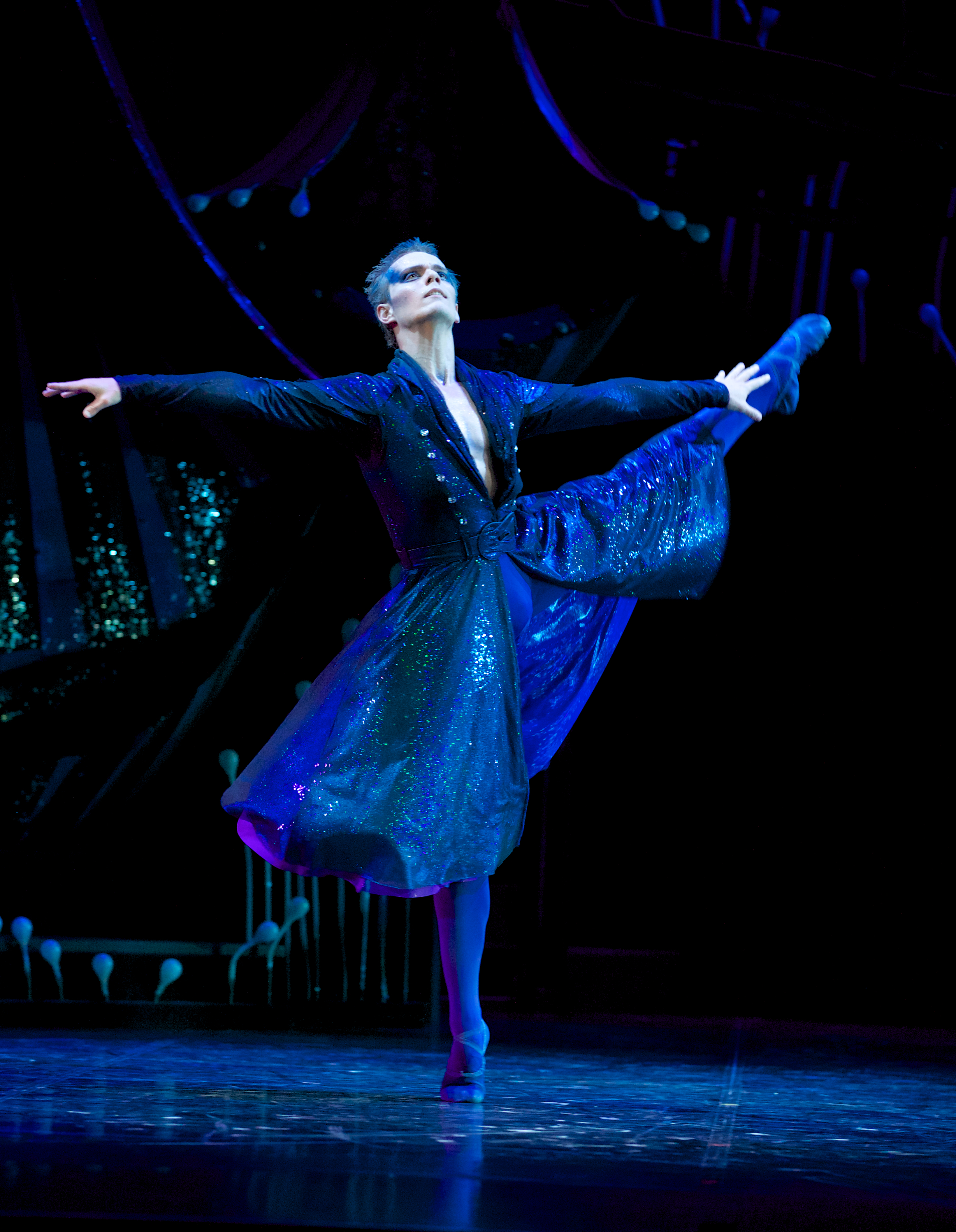 The dance quality is high right across the company, every dancer shines, from principal through to corps. Lead Laura Hidalgo as Titania has a muscularly refined physique with perfect line who partners athletically with the coolly commanding Victor Estevez, as Oberon, his visage beautifully coloured with midnight blue eyeshadow, sporting a black cape or military coat. As Miss. Perfect, Hermia, Yanela Pinera’s exquisitely long leg extension and perfect form are showcased in her pas de deuxs with Joel Woellner, just one of the many treats served up by the cast of characters in this happy tale and company talents.The attention to line and refinement of execution is to be commended across the entire company.

One of the show’s highlights, Kohei Iwamoto leaps lightly as the cheeky Puck, Oberon’s servant, exquisitely costumed in a torso-tight midnight black lycra, resembling the sheathness of a bat’s wing and bodily fur set with adorning coloured sparkles. Rian Thompson is unmissable as the man who progresses from class fool to adored object of infatuation, providing delight with his enchanting choreography of hoof-like gestures, ungainly leg extensions, tail wags, and frolicking leaps when he turns Bottom, the donkey the object of Titania’s affection. Their romantic coupling pas de deux is one of the special moments in Shakespeare’s tale, and wavers between foolishness and sheer beauty. Both Puck and Bottom, with the Rustics, inject pure comedy into the show, as well as talented movement display. 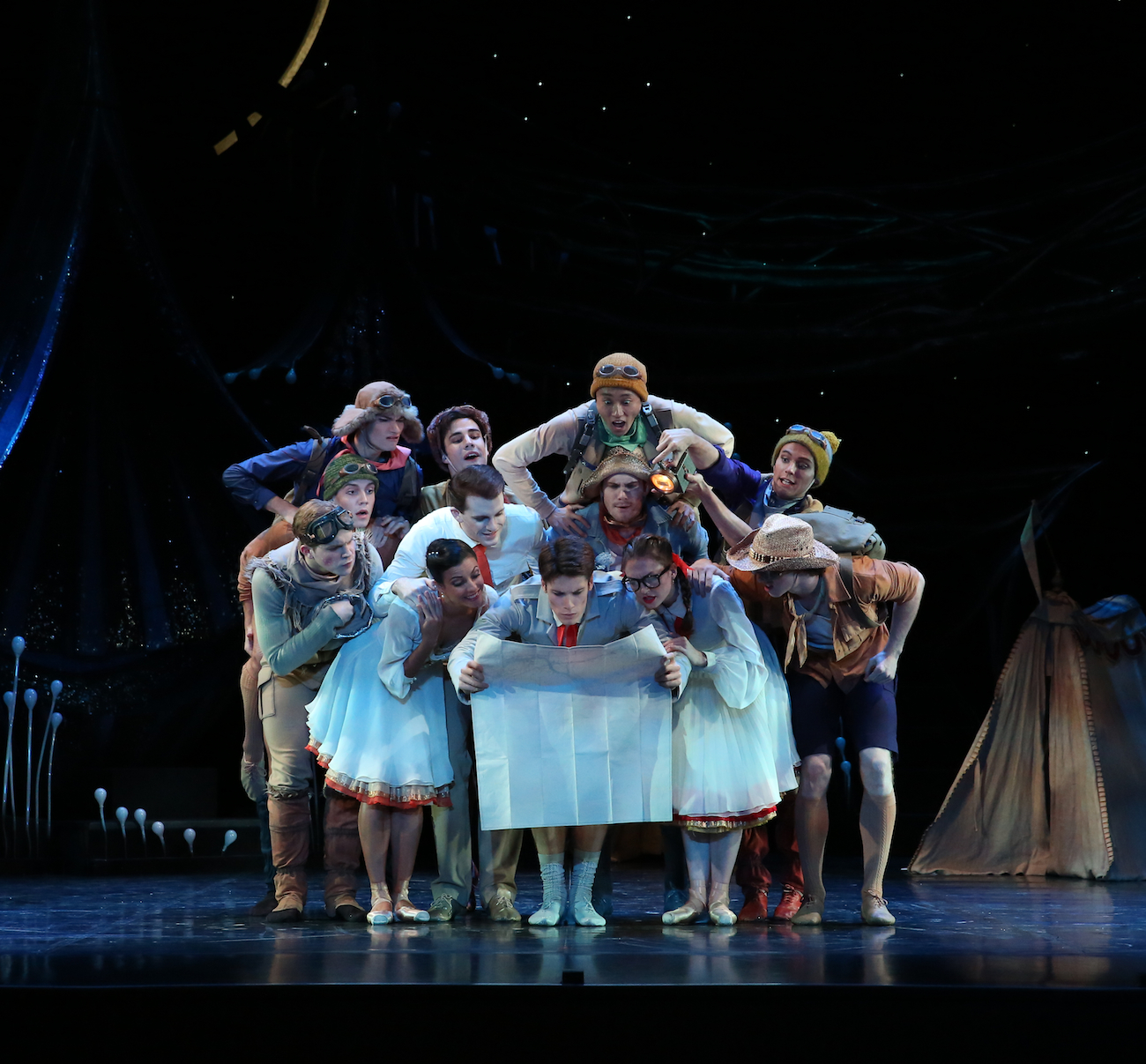 The Lovers and the Rustics.

This production throbs like a children’s storybook come to life. Set and costume designer Tracy Grant Lord has rendered an entire world- glistening, glowing, and touching hallucinogenic. The fairies and nymphs’ costumes are from every childhood dream of playful cheek – strands of coloured fabric tied to hair, hands and torso, gold glitter-encrusted black umbrellas, and feminine punk tutus in purple, pink, indigo, and yellow. The millennials loved the bookish props of romping voyagers Helena and Demetrius with their thick black glasses, and the Harry Potter-ish group’s fold out map, tents, flags and nets, which leads them into trouble. 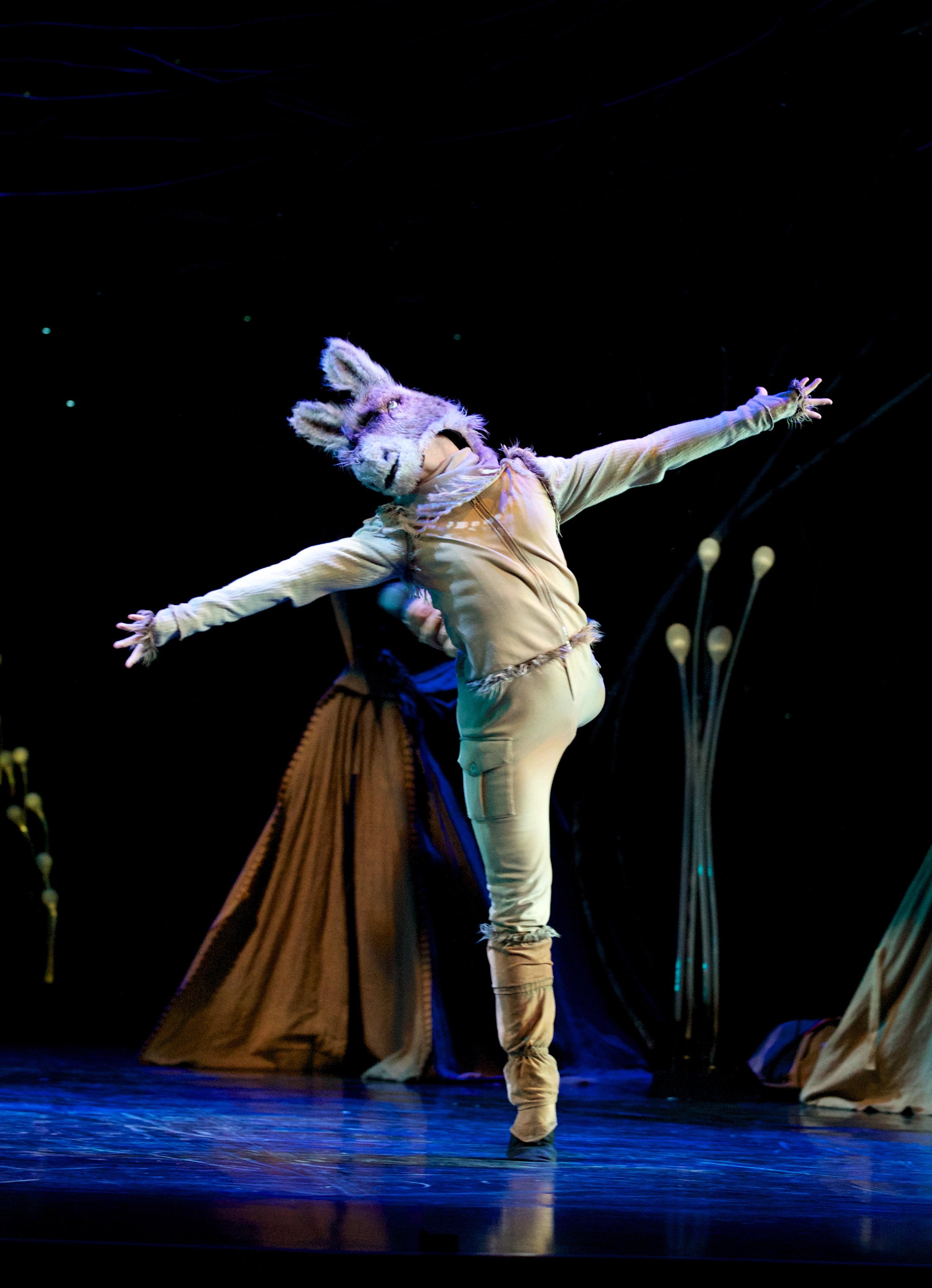 You will thrill to hear the classic motifs and moments of this famous musical score, which include samples which became wedding. Underfoot, Orchestra Victoria took us on an idyllic journey via the blissful composition of Felix Mendelssohn. I looked under at interval – the whole lot was tucked beneath the timber of the stage- drums, percussion, et al. Hearing ballets performed with a live orchestra is the ultimate enhancement to the movement design and storytelling, and is a luxurious delight that partners especially well with live ballet.

This show is the ultimate package. A ripping story with a cast made for everyone to identify with, a rollicking story of mishap and role reversal, culminating in resolution and harmony, is a night not to be missed. If you ever have the chance to witness this production, act quickly. It sold out this season and left everyone breathless with delight.

A Midsummer Night’s Dream showed 3-7 October(120 minutes with interval) at Her Majesty’s Theatre.

Catch up with all their offerings at Queensland Ballet, or via their event posts.

Disclosure: The Plus Ones were invited guests of Queensland Ballet.

A Classic Night Out at Lexicon’s Contemporary Circus