Survival after a suicide loss. You wouldn’t think there was much positive about it. Yet award-winning playwright and Anvil Productions co-Director Rebecca Lister reveals a wellspring of strength inside a group of suicide bereaved who join a writer’s group after the impact of losing loved ones in her new piece of writing, 2:20AM. The play is so named as one of the characters wakes each night plagued by the What If’s that become part of the daily reality of those left behind. It also describes the unwelcome no man’s land survivors find themselves in, picking over the debris as suicide zombies in a post-suicide world. Those impacted by suicidal death are thrown into this landscape through the actions of another yet must traverse and survive the terrain.

Drawing on her own direct experience and long term engagement with Jesuit Social Services’ Support After Suicide writing groups, Lister’s play is one of unity and hope. A vibrant group of characters meet weekly over nine months, each learning about writing whilst releasing some of the trauma from suicide loss, each one of them having lost someone dear. They are at odds with each other, with their own experience, and, often, with any concept of being productive whilst mourning, yet, over time, and through frank disclosure and the building of trust, each character accepts the offer to try- to reflect, to listen, to encourage and support as well as to perhaps forgive. Themselves, each other, their lost loved one, even the process of transformation forced upon them by tragic displacement and loss. In order to move into some kind of possible present, people bereaved by suicide have a lot of material to move through. 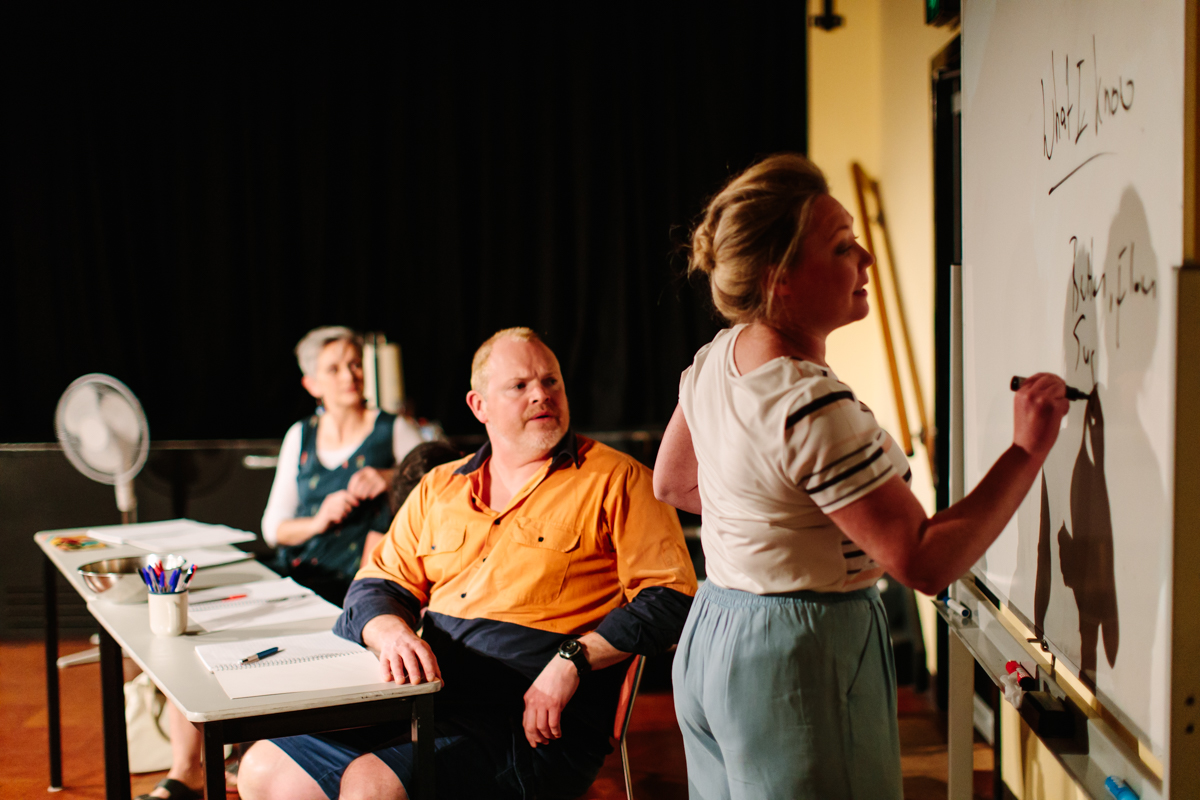 Zoe Ellerton-Ashley as Emma leads a writer’s group for those affected by suicide.

Set in everyday modern Australia, Emma, Trish, Dave and Stella come to the group with different loss stories and stages. Director Hallie Shellam’s set is ordinary, like a community centre activities room with whiteboard, plastic chairs, outdated tables, and coffee and tea facilities. It is rooted in the real world yet cleverly uses lighting changes to show alternate states. Emma is the chipper host-with-the-most who stays on track despite moments where her own grief over losing her brother stalk her. This is a place of literary learning but the participant’s personal load is heavy.

Megz Evan’s spotlit pink and blue lighting reveals internal monologues of each character’s deeper inner feelings, the doubts and questions which lie beneath their surface presentation of control to make it through each 24 hours, such as attending the workshop. Darius Kedros’ emotive musical score touches on the pain that lies at the heart of the process. The merging of this layered content creates rich bonds within the group as well as identification with the role writing plays to truth, storytelling, and pathos, leading to eventual catharsis, one of the earliest purposes of public performance.

Suicide is a punishing act that hits people unprepared for it. As the popular saying goes suicide is something that happens to other people. The characters in this play are very ordinary, everyday people just as you will see at any memorial.  In 2:20AM, it’s the character’s ordinary struggle and pain which makes their stories all the more watchable and relatable.  The play text deftly gives witness to the range of reactions suicide brings – the loss of connection and relationship with no means to resume contact.  The violence of the act. The shock of discovery. Regret for pain experienced.  Anger at the means and outcome. Living with intense emotional pain. Irresolvable antipathies. The loss of anticipated futures, and all the other effects this dramatic loss of life introduces into survivor’s realities which also, then, rocks their own identity and self-confidence, introducing new alienation –  from self, family, and society. When taboos are not discussed, it further alienates those who experience its lived truth. 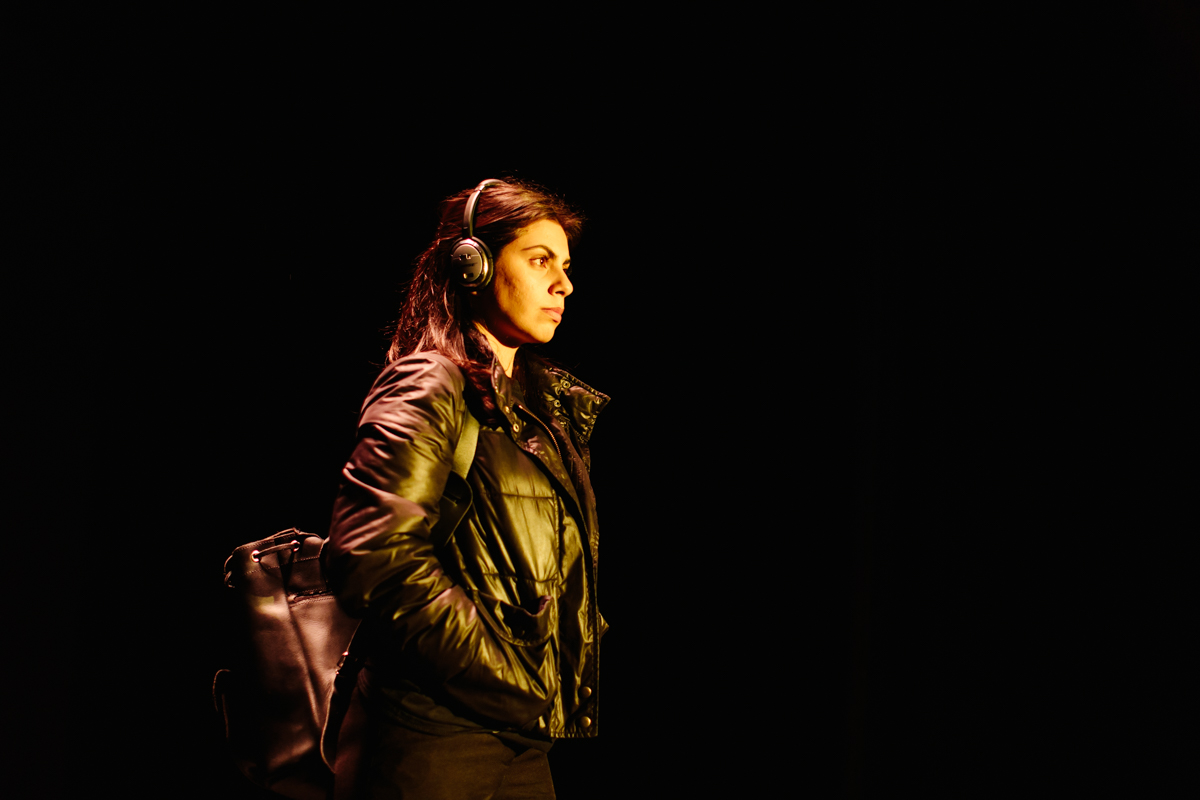 Izabella Yena as Stella, the youngest member, in her early 20s, plays the over-emotive rebel who is torn in pieces by her father’s loss. She insists on travelling to class by tram only, avoiding the quicker trains. Later, the group discover why. Joanne Davis renders a beautiful, still Trish, moving through the motions of the everyday as mother to three children whilst in a daze trying to understand why her partner killed herself. Michael Treloar as father Dave, losing his daughter age 16, is vivaciously portrayed as a bloke who still finds it difficult to voice her name, to talk about what has occurred. The rugged blokey Aussie male, he is hit by a tidal wave of shock and grief which, literally, at times makes him unable to talk about his experience, a complex set of reactions often faced by parents to the loss of their child. Surprisingly, it is at work and with a male colleague that his protective bubble bursts and he cries to describe his grief.

The play sits in a positive space, allowing the vibrancy of the human spirit to allow the characters to unite in their alienation, to find community within this newly defined state that pits them in a struggle to live and live well. Release during difficult times is essential to recovery and this play presents moments across this spectrum of reactions, thoughts, and feelings. This cast bring an energetic authenticity to their portrayals, with each character’s story an amalgam from a range of writer interviews with people touched by suicide. Recovery from suicide loss exhausts, swallowing up a lot of the lives of survivors, and this play shows how unrelenting it becomes. There’s a lot to laugh about in the script and the actors relish these buoyant moments, giving us the levity that is so frequently found in dark places. You wouldn’t think you could use humour dealing with one of humanity’s ultimate horrors but the characters, stung and hurt, often tease each other or muse on the process, even living. 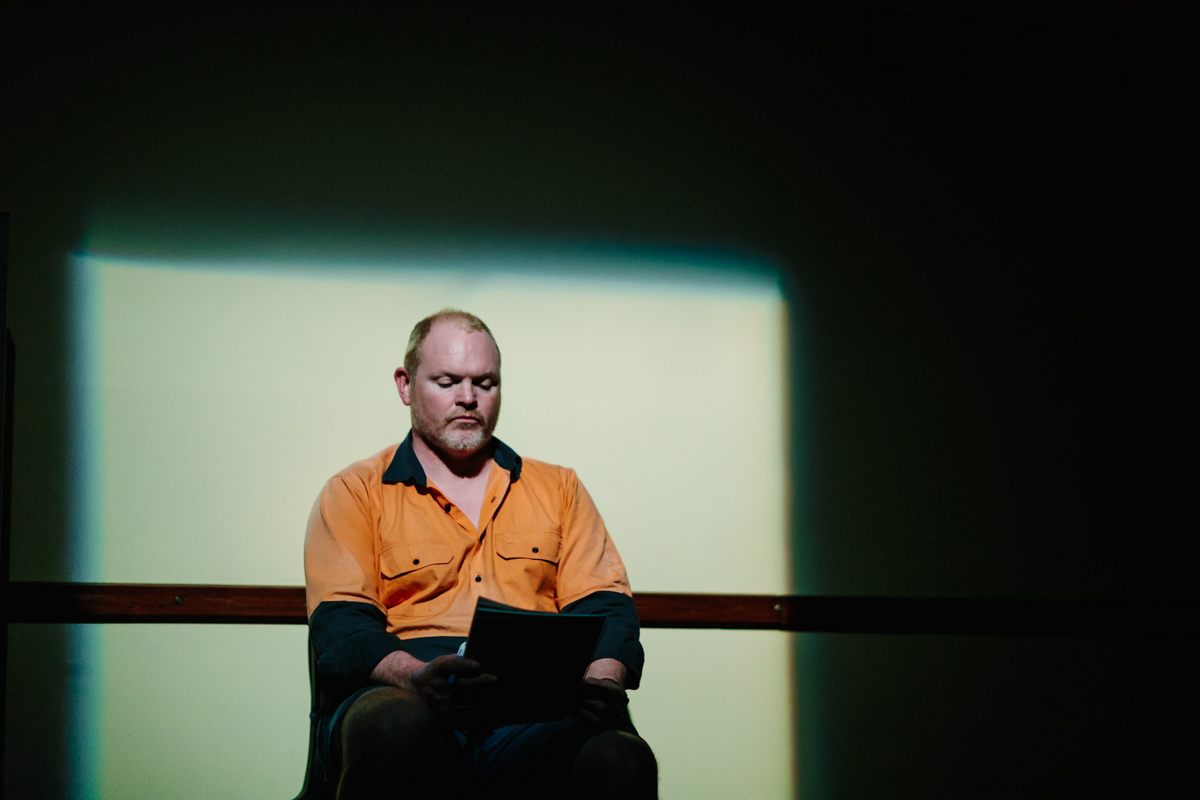 Michael Treloar as Dave who finds it hard to live now his daughter has died.

Official language rarely speaks about the impact on those connected to losing someone to this form of death. It concentrates on the act and the prevention of future completions, centring the focus back onto the agent with little discussion about the ripple effect it has for those impacted by such decisive acts-the parents, partners, children, connected affiliations (extended family, employers, colleagues, friends, neighbours), and society more broadly.

Members in the audience had been impacted by suicide loss and an open and helpful forum followed each showing, facilitated by SAS staff members who are trained suicide grief psychologists and social workers. Discussion touched on key features of suicidal death- stigmatization, isolation, guilt, and complex contributing factors thrown into the mix of general bereavement and mourning. Add to that untimely deaths, violent deaths, acrimonious last communications, or long term separation, the failure of medical care or support services to meet the urgent needs of the neediest,  and many other aspects which make suicide an action that wounds deeply, introducing a cocktail of delayed effects into the lives of those living beyond it.

Suicide is a complex message to society and it’s critical we defray the penetrating pain it releases into our world as some small step towards better understanding and to survive it’s impact. Plays such as this, combined with services like Support After Suicide, offer a means to come to terms with terminal self-harm. It is hoped the show will tour nationally and regionally, encouraging people in the community to not lose hope and to continue the fight to survive, to celebrate unity and shared experience, the better part of being human.

is the Theatre Specialist for The Plus Ones, Melbourne.  A performing arts and literature graduate of VCA, UOM and Deakin, she has a flair for bold, non-traditional performance platforms. An active contributor to The Melbourne Shakespeare Society, on the street, or in the box seat, she is always looking for quality works that push the envelope.

2:20AM showed 29 August – 9 September at The Richmond Theatrette, Melbourne.

Discover the social mission of Jesuit Social Services and see the list of statewide support groups offered by Support After Suicide. Operating since 2004, it provides counselling, group and online support to people bereaved by suicide.

‘Montreal’ by Paul Richards at the Melbourne Fringe Festival