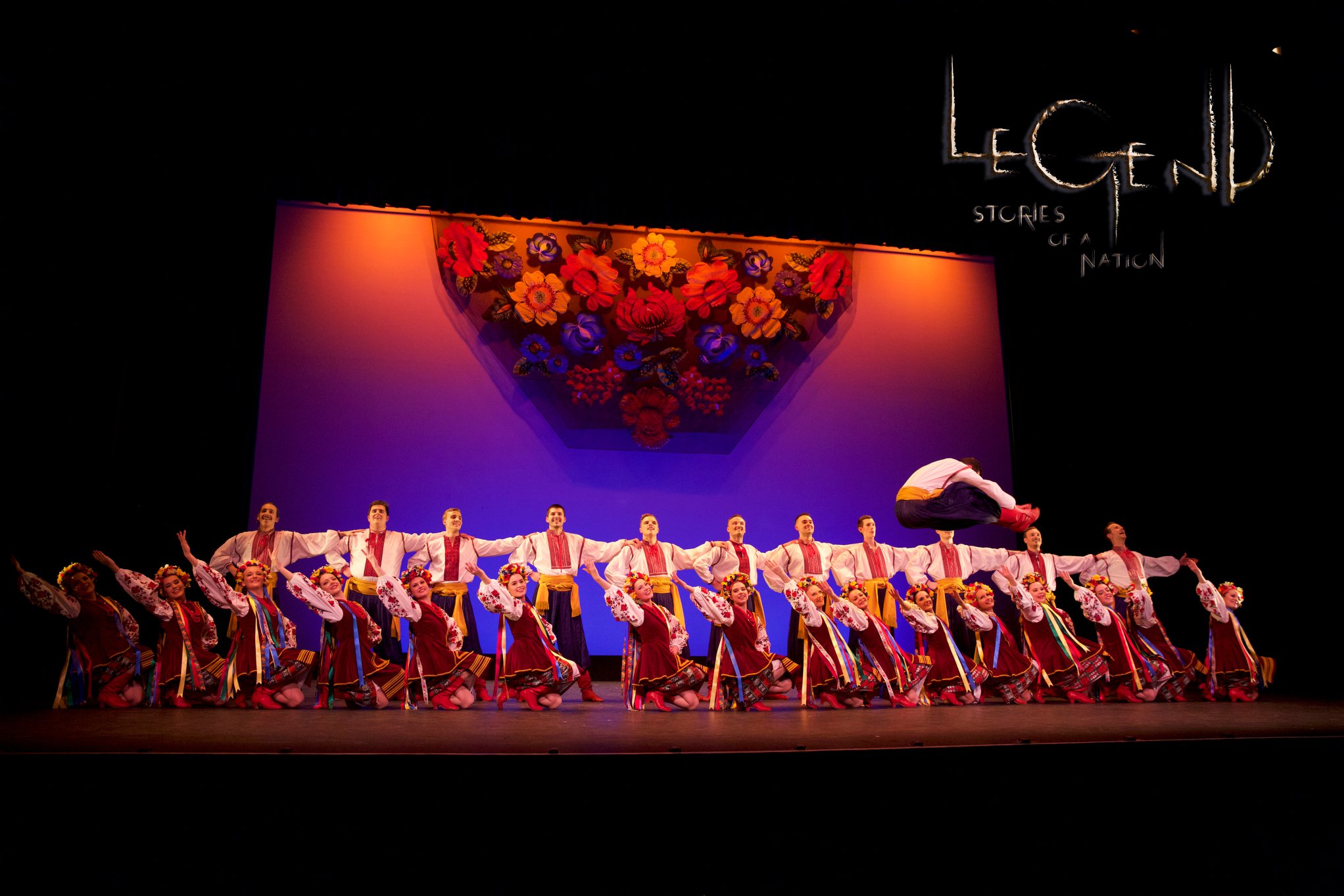 The signature dance of the Ukraine, the Hopak.

Dynamic national stories and traditions told in bright colours, intricate design, and vibrant movement were enjoyed at the end of Lehenda Ukrainian Dance Company’s 2018 national tour of Director Melanie Moravski Dechnicz’s Legend – Stories Of A Nation. An auditorium packed each show with celebratory expatriate nationals with descendants where vigorous clapping and joyous seemed compulsory. It’s one of the effects I most love from my lifelong association with folkloric dance- the community participate and encourage the dancers through energetic encouragement, showing dance’s ancient role – to unite people. To be with such a crowd is to feel their hearts bursting with pride, celebration, remembrance, and unity.

There is a lot you’d popularly recognise from this style of national dance. The male Cossack dancers, drawn from groups of men preparing for defence, stun the crowd with their group acrobatics, circle dances, phenomenal leaps, and ritualistic preparation for combat. The female dancers are iconic, recognisably adorned in Ukraine’s signature dance, Hopak, with high head dresses draped in multi-coloured robbins which descend over the torso of their woven fabric, tightly-fitted skirts. Let’s not forget those famous Slavic dancing boots up to their knees in bright red, and heavy black, leather. 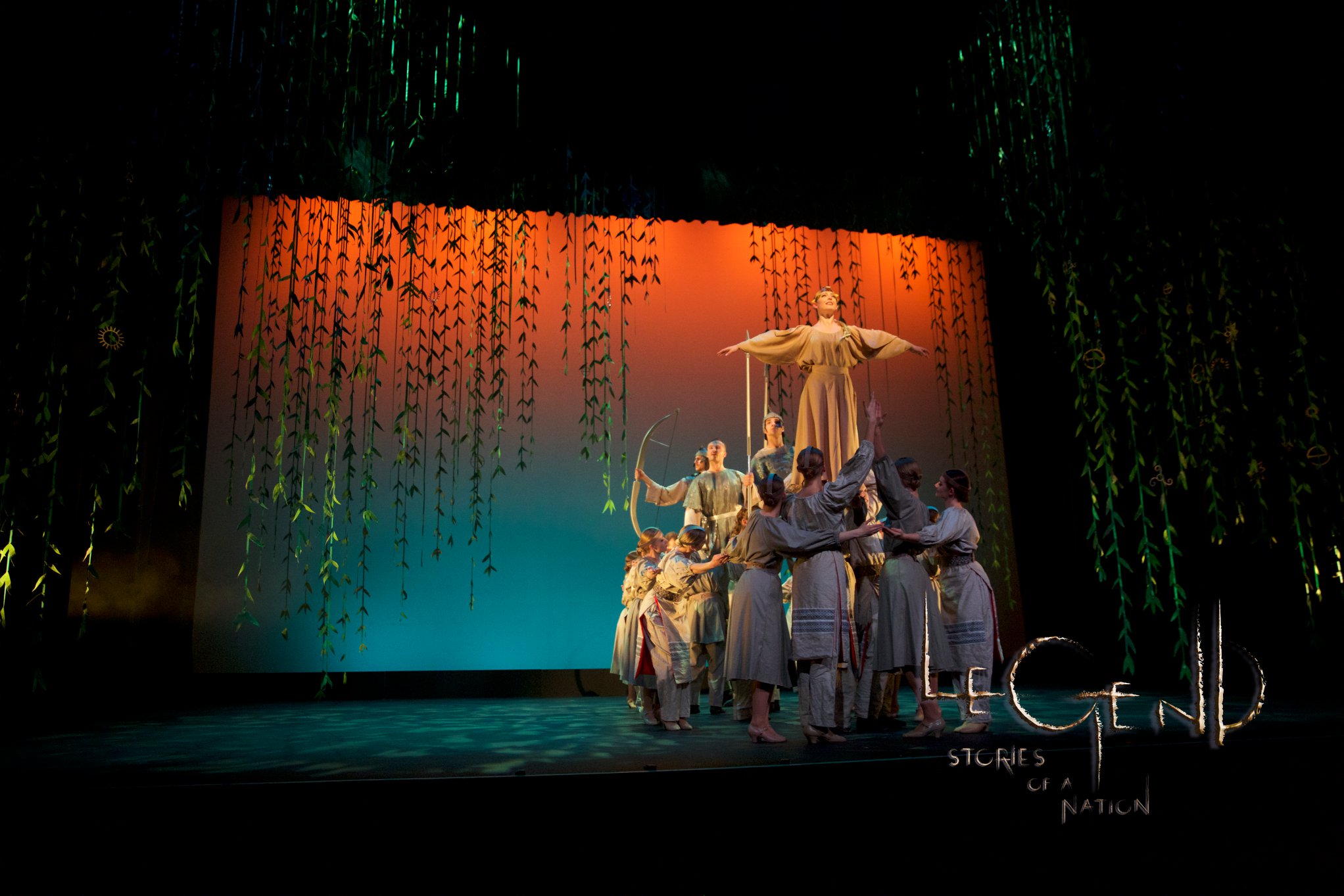 The willow branches beside the river Dnipro in ‘Kyiv’.

The traditional dance tells simple stories of people and engagements, of village girls in the forest, returning from the marketplace, of playful flirtations, a wedding dance, or interactions with craftspeople such as the local blacksmith. They show their roots in small town life of the ordinary people and originate across a range of geography and place.

Act II presented a standalone complete work, Kyiv, based on the history of the founding of the Ukraine city. Stunning costumes and set design allowed a fable-like environment to emerge before our eyes. Telling the mythic tale of three brothers and one sister, Lybid, who founded the city, it elegantly depicted the Dnipro river, the forest’s willow trees, the four siblings, and the community who established themselves beside the river.

Referencing countless battles and invasions over centuries, the work is set in a mythic timespace, ultimately reflecting the nation’s struggle for independence.The state emblem of the country, the trident, was majesterialy integrated amidst the mass movement design, and their depiction of a boat with its prow, comprised entirely of humans, was astounding as were their lifts and elevation of the characters overhead. This was an amazing work reminiscent of the great crowd scenes from Hollywood’s epic cinema of the mid-twentieth century. The musical composition of Taras Terletskyy drew on rich traditions and was powerful and affecting, honouring the nationalist stirrings evoked by the tale. 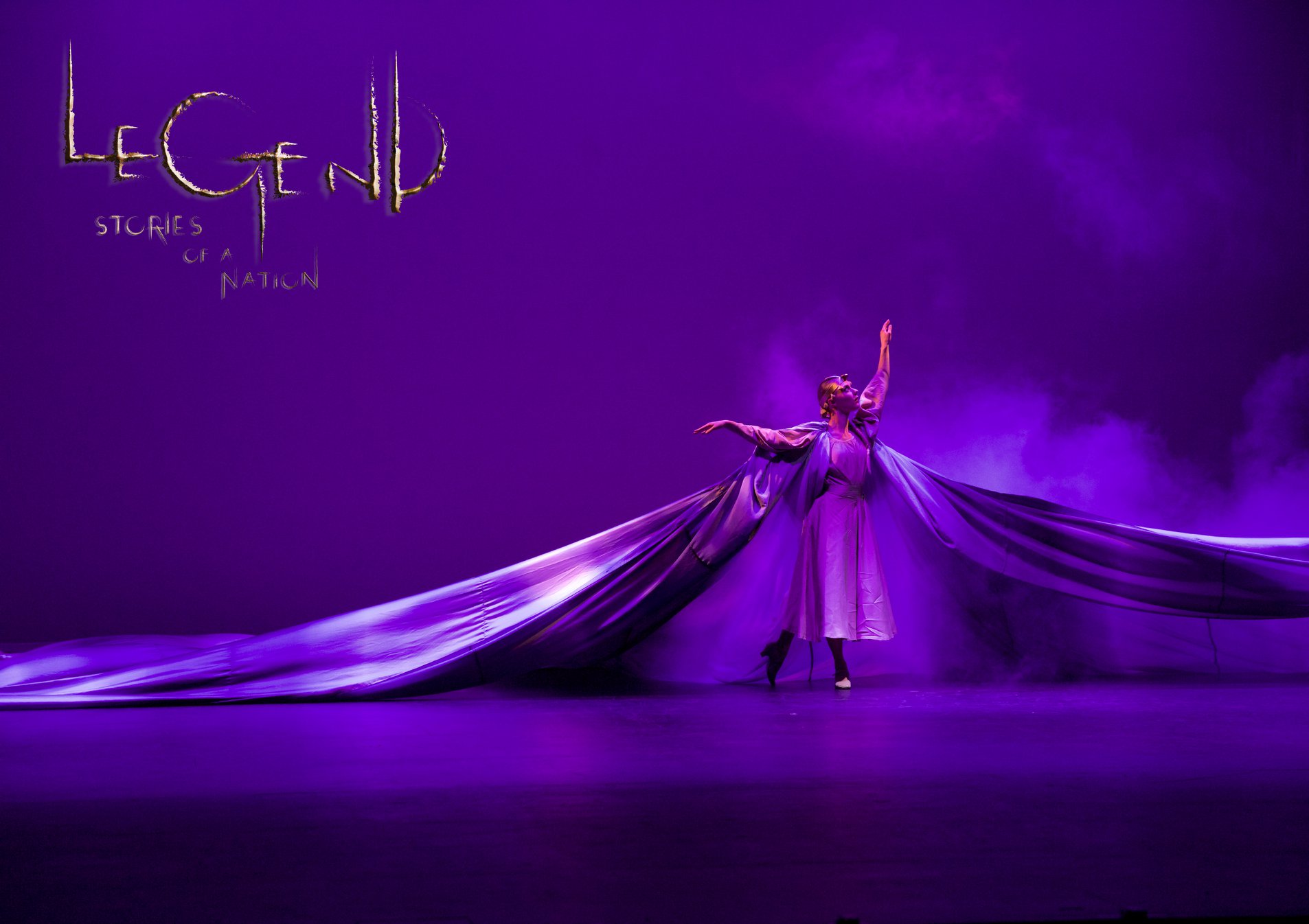 Sister Lybid, born from the river, in Act II’s ‘Kyiv’, the origin story of the Ukrainian city.

The costumes by Natalia Moravski were historical record in themselves. Her attention to detail, whether style of garment, size, proportion, or in draping caught our eye. These styles are passed down through countless generations as national dress. We saw variety from the different regions- the Carpathian Mountain dances of the Hutsuly were delightful with their brown and fawn fabrics, criss-crossed shirt ribboning, and feathered caps.

Documenting and disseminating these historic dance styles, and legendary parables of people and place, is important work carefully carried out by Ukrainian Merited Artist Melanie Moravski Dechnicz and her company of 40 dancers. A Monash University Performance graduate with a dance specialisation, ex-Ausdance staff,  and teacher at the Australian Conservatoire of Ballet, the Artistic Director has been deeply active in the Australian dance community for many years and the fruit of her endeavour is borne out in the establishment of this company and their continued creative output.

Based in North Melbourne, Lehenda delivers a professional school teaching and training for the company and general dance students of whom there are more than a handful of men, something many companies struggle to enlist. It is engaging to view many males learning the traditional dance moves of their forefathers and executing them onstage for our edification and education with such vigor, energy and dynamism. Dancing in groups, learning complex moves, and physical tricks, being with your own people, these are traditions that instil more in people than time imagining lived experience via a digital screen.

The combined efforts of the entire team behind the company and performance spectacles such as this lively and inspiring exemplar  highlight the rich creative resources we have in the community to tell stories through dance, and unite community. It was a rousing, spectacular showcase of the excitement and rich history inside Ukrainian dance.

Legend- Stories Of A Nation ended their natioanl tour with performances 25-26 August at The National Theatre Melbourne.

Disclosure: The Plus Ones were guests of Lehenda Ukrainian Dance Company.

A new craft brewery for Collingwood