Sometimes the most powerful message can be conveyed in the simplest of terms. When an idea has enough force to carry its own weight simply by its word, it eschews the need for superfluity. Such is the case with The Fall, an audacious piece of political theatre from the Baxter Theatre Centre at the University of Cape Town making its debut on our shores this winter. While there is little in the way of set or props, the intensity and force of the performance alone is enough to captivate the viewer and bring the forth the greatest of emotion within. 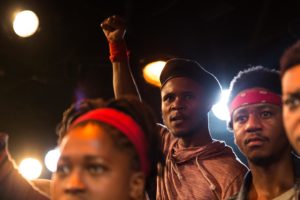 The Fall is nothing short of an honest and stirring call to action. In this moving and thought-provoking piece of performance art, the audience is invited to join in and share the perspective of Cape Town University students who came together in the spring of 2015 to start the #RhodesMustFall movement. The movement, which began as a demand to remove the statue of British Imperialist Cecil Rhodes from the campus grounds, transformed itself into a broader ‘decolonisation project’ seeking to dismantle all forms of discrimination and one in which its diverse members brought forth very different lived experiences. This is clearly seen in the performance of its young and talented cast – who were themselves part of the uprising and collaboratively wrote the piece together. Their firsthand experiences shine through in their raw and compelling performances. The fresh energy and youthful humour that they bring to the piece is clear evidence of how young people can be such powerful agents of change. 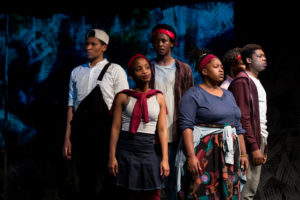 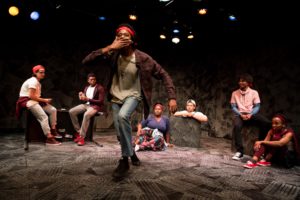 The Fall is bold and as one cast member states, not bothered if the viewer is uncomfortable – for being uncomfortable is the only real way in which to induce lasting change. It can also be seen as a broader global issue playing out in real time. The removal of vestiges of colonialism and racism is a phenomenon not unique to South Africa. Around the world discriminatory icons are being challenged and creating massive political upheavals, setting the stage for incredible works of art, as The Fall sophistically demonstrates.

– Dotti
Dotti (Nicole) Mazga is a law graduate currently learning how to make the world a better place in Melbourne. When she’s not hard at work crafting legal arguments, you can find her consuming any theatre, dance, or space-related event she can get her hands on.

‘The Fall: All Rhodes Lead to Decolonisation’ is part of the Big World, Up Close series and runs 28 August – 2 September at Fairfax Studio at the Arts Centre Melbourne. Buy tickets now.
The venue is accessible.

Legend- Stories of a Nation serves up Ukrainian delights