A one man play about a clown’s lifetime kept us mesmerised for 80 minutes in brilliant modern classic, Scaramouche Jones. Concerning a loveable rogue and tired stage man, this exquisite piece of millienium’s end writing gives us the clown’s journey and is superbly acted by one of our country’s favourite actors. In all great writing for theatre, the fool or clown sees everything and is rankless. He often sits beside the King, a favourite, and can travel and trespass across many social borders he never could as an ordinary person. The same is true for actors, of a fluid social class, who apply face paint, masks, voices, roles and histories as they paint for all of us believable people and fables. This show is a 5 star vehicle which does precisely this. 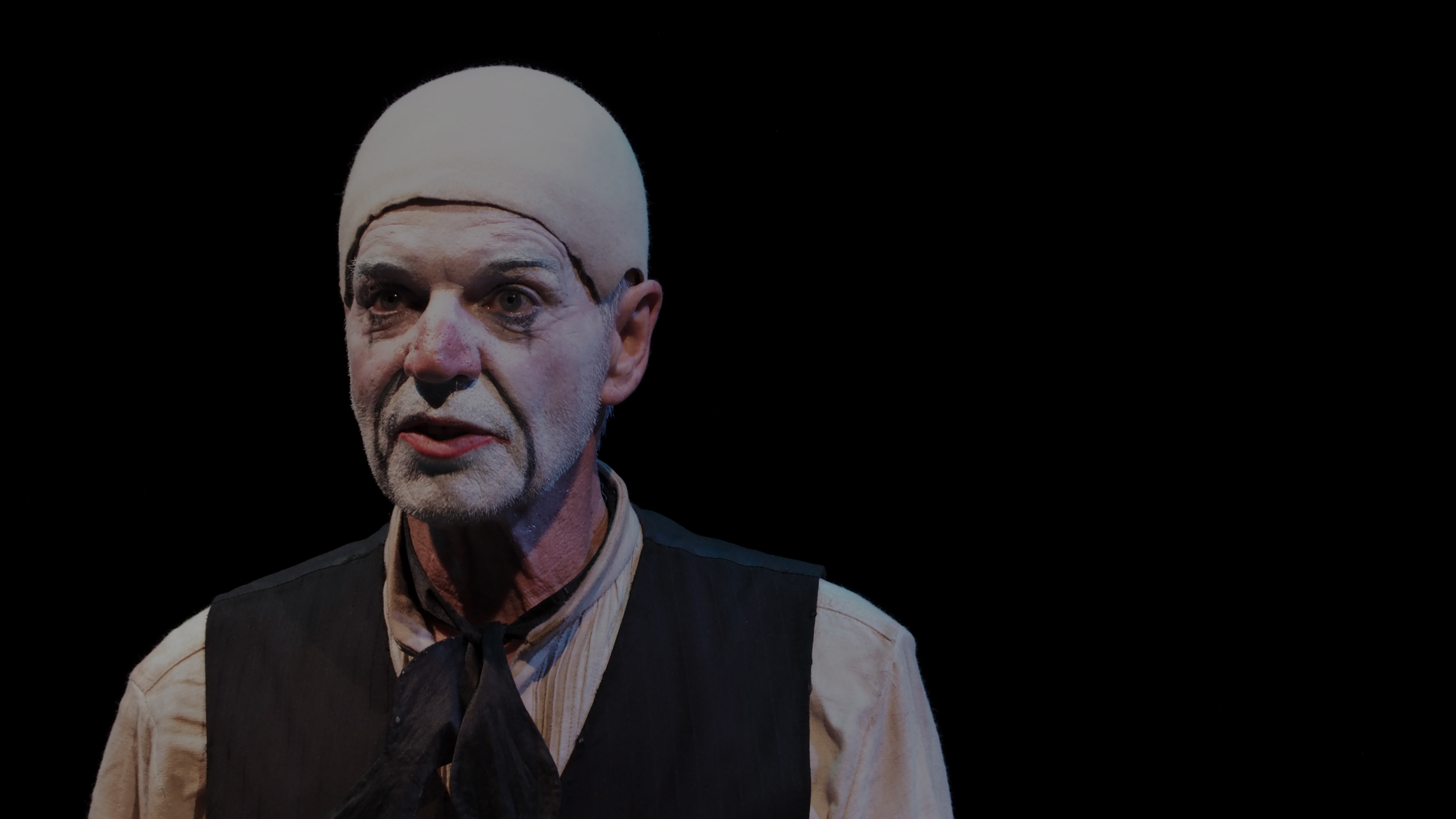 Set within the offstage dressing room of a retiring performer, atop it’s patch of green lawn surrounded by sweeping flaps of canvas, poles and ropes, unshielded from the cold night air, the clown Scaramouche, a storied and revered senior performer, wipes off his white painted face for the last time and recounts for us his life story, across countries, characters, sets, props, and absurdity. A child of the world, and victim to its various predations, he adopts names and indentities as he goes as he is assigned to various owners, bosses, roles and employments.  Each of these careers is termed a ‘mask’ and the play, like the wanderer that is it’s titular lead, travels forth to describe the seven masks of the man.

This one man monologue speaks of Scaramouche’s childhood inside a tavern and brothel, of losing his mother, a prostitute, early and being traded both as slave and orphan to various buyers in the marketplace of the human exchange. It covers many locations and countries, stages and settings, audiences and groups as the child seeks family, identity, and community f a rootless life, you have to laugh, otherwise you’d cry or die and the script cleverly offers up some amazing characters and moments. 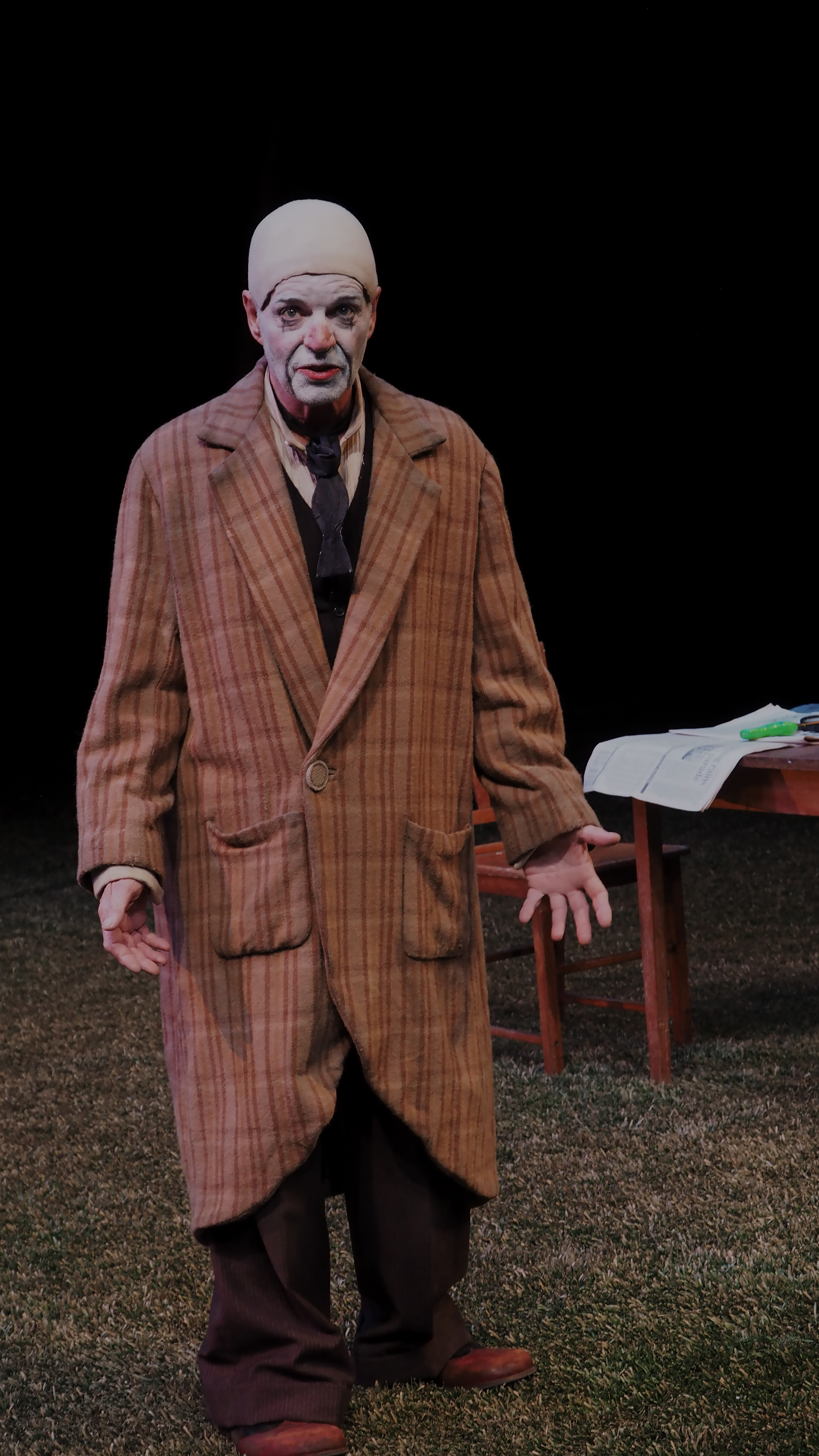 This lauded piece of British writing by Justin Butcher was written just at the close of the 20th century and is a meditation on the failings of British Empire, and is a crowning work for any serious dramatic actor. Storied television and film screen actor, Colin Friels, comes energetically to grips with this dark, bleary off beat and beaten character, offering a superlative performance of the dark and light found across a life. His body rippled with the heavily worked muscles of a circus performer, or boxer, Friels, draped in a torn 1950s dressing gown, shows us the many faces of an aging man at retirement-  happy, sad and bitter faces- as he paints a picture for us of the life of character Scaramouche, a wayfarer from Trinidad. His nativity and destiny to be a circus performer, a rootless witness to life on earth across many lands, the lines of this play offer commentary on human action like something from a dream. Friels, at the height of his dramatic prowess, is up to the big task of carrying the focus and bringing Butcher’s fiction to life as a living, breathing being who tuggs deeply at our heartstrings. 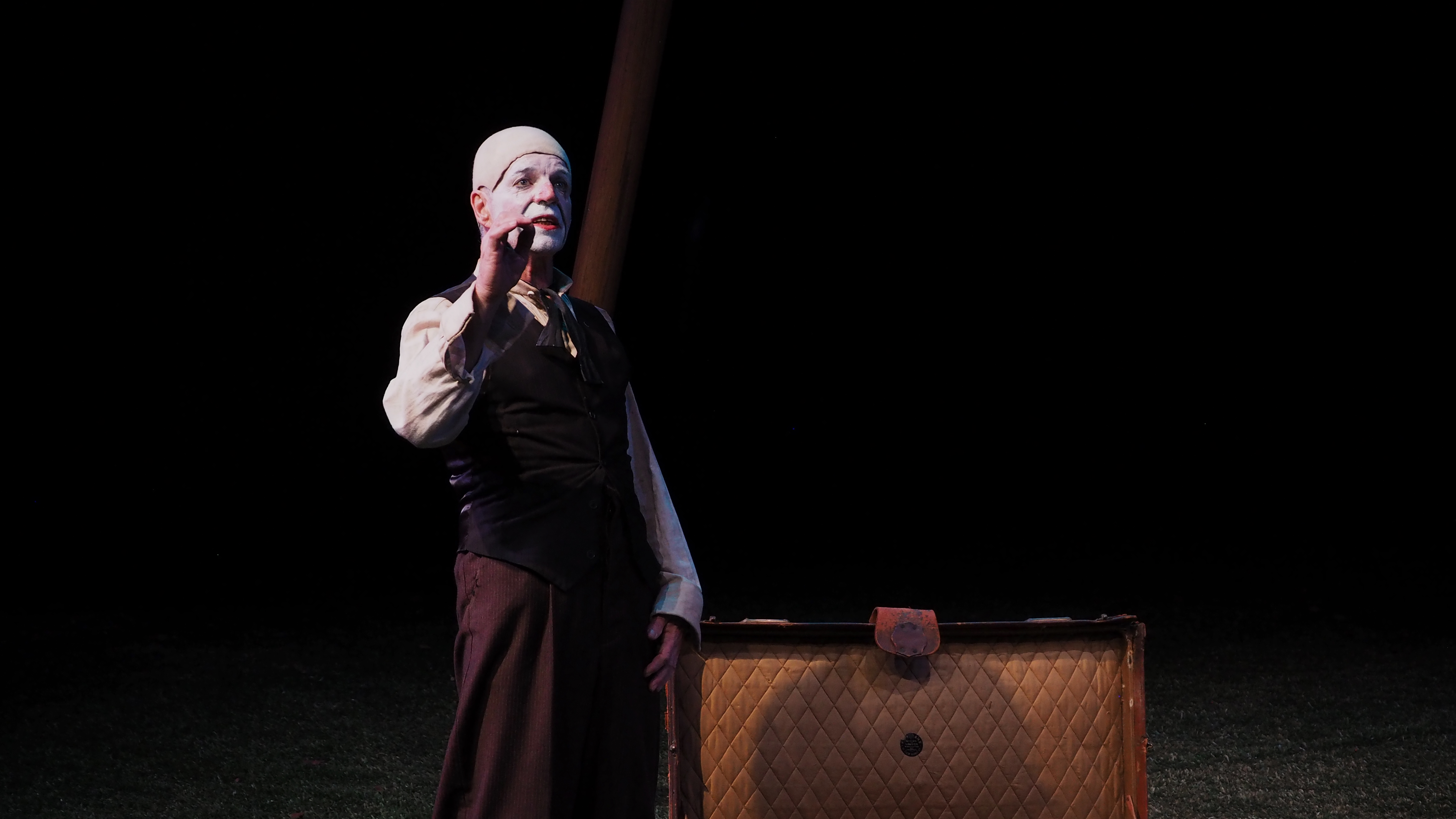 Alkinos Tsilimidos’ direction is sensitively masterful- simple, unfussy, and, coupled with the simple corner of a set it allows our attention to be wholly directed to the physical, verbal and gestural magic of the actor as he brings this magnificent being to life through its colourful, vibrant text. The parallels between the actor playing the part (senior, respected, character driven) playing a retiring thespian brings a special focus to its rendering, not lost on educated audiences.

See this show to see a master at the top of his game applying all his talent, experience, expertise and hunger for what it is that is creation on stage to a piece of wistful writing. There is so much you will love- Scaramouche himself, his witty way with language, the freaks, fools and kindnesses he meets across his journey, his search for himself, and Friels’ spectacular rendition of all that makes the man, Scaramouche.

is the Theatre Specialist for The Plus Ones, Melbourne.  A performing arts and literature graduate of VCA, UOM and Deakin,  she has a flair for bold, non-traditional performance platforms. A contributor to The Melbourne Shakespeare Society, on the street, or in the box seat, she is always looking for quality works that push the envelope.

Disclosure: The Plus Ones were guests of Arts Centre Melbourne.