100 years of war. Many decades of suppression. The Australian women medicos we never knew across a century of war come vividly to life in Carolyn Bock and Helen Hopkin’s superb writing presenting their lives in The Shift Theatre’s Hallowed Ground. This play is an elegantly worked narrative about the fight women took to the armed forces establishment to serve at war as medicos, fully qualified and experienced, and the knockbacks, refusals and rejections that led them to many alternate pathways to serve and support those fighting in foreign combat. Evidence of true fighting spirit, the audience is amazed at how, across one century, from the early 21st Century to early  2000s, little halts these women living their determination to practice their discipline. 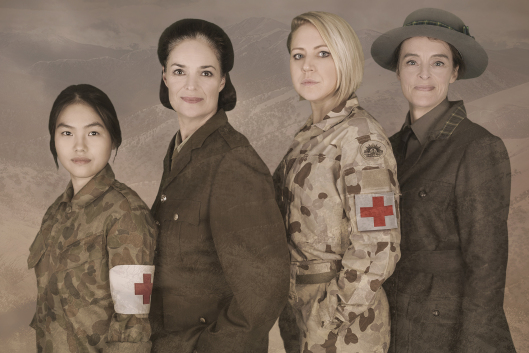 These involving tales are based on a handful of true Australian stories of four women doctors at war. Biographies come to life through the study and adaptation of sampled letters home, personal diaries, imagined conversations, written reports, newspaper snippets, and enacted phone calls from action. The well-researched, clever writing offers so much to us as students of this hidden corner of herstory Downunder. Marvellous tidbits such as early field use (unapproved) of Xray machines by the indomitable Lilian, and testing performed by women in North Queensland laboratories for soldiers returned from New Guinea with malaria show that the weaker sex sure were busy in times of war. Each era is so well recreated, you feel as if you are inside the tent with these ladies.

Four accomplished women actors across a range of ages energetically bring to life some deeply touching and heartbreaking stories of heroines whose stories ought be better known nationally…but which, like much of the official record of war, only star stories which match culture’s dominant paradigm for any given era. This work is a triumph for these women’s important testimonies,their careers, and of the work of the team that imagined, researched, crafted and birthed this important historical document. 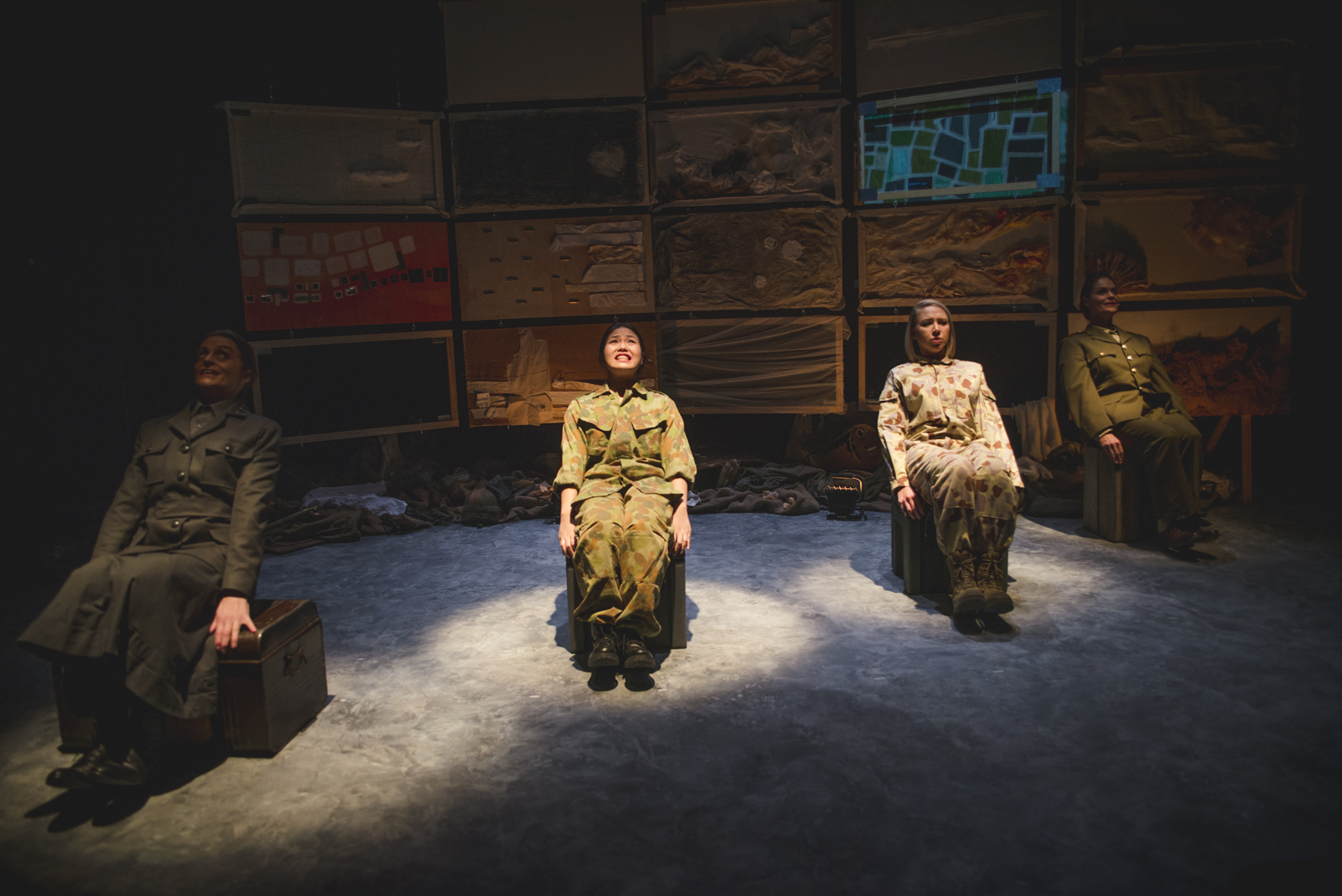 Experienced theatre actress Helen Hopkins renders courageous Lillian, age 50, from Warrandyte, who is refused the right to serve in WWI.  Unperturbed, she immediately decamps to serve under the famed Scottish Womens Hospital in the Balkan snowfields with her trusty bestie and  companion as intrepid field assistant. Unskilled, she drives trucks across pitted, clay roads, witnessing first hand atrocities. Each of these stories is so gripping you’d think them fiction. Unbelievably, they are true.

The combination of Meg White’s vividly evocative set detritus from the war field, or kitchens at home, sit under a hovering series of panels, floating in the air above, like reconnaissance maps or satellite territorial imagery, calling to mind the dust, mud, wire, gauze, bandages and other makeshift support gear and austere settings these women practiced under. The toll of service is shown, too, both emotional, psychological and physical.

Stark orange-yellow lighting by Richard Vabre evokes the hazardous zone of combat, unrelenting desert light in a barren land which can blind with heat that stifles energy. Staged direction from Catherine Hill keeps the action up close, centre stage, and delivery short and punchy. The four cast mimetically manoeuvre in an unspoken gestural dance between scenes, reminding us of the significant action and presence of these women’s careers in time, despite silencing and absence from the public war record. It’d be interesting to number the sculptures of women at war found in Australian cities and towns as mark for their record. 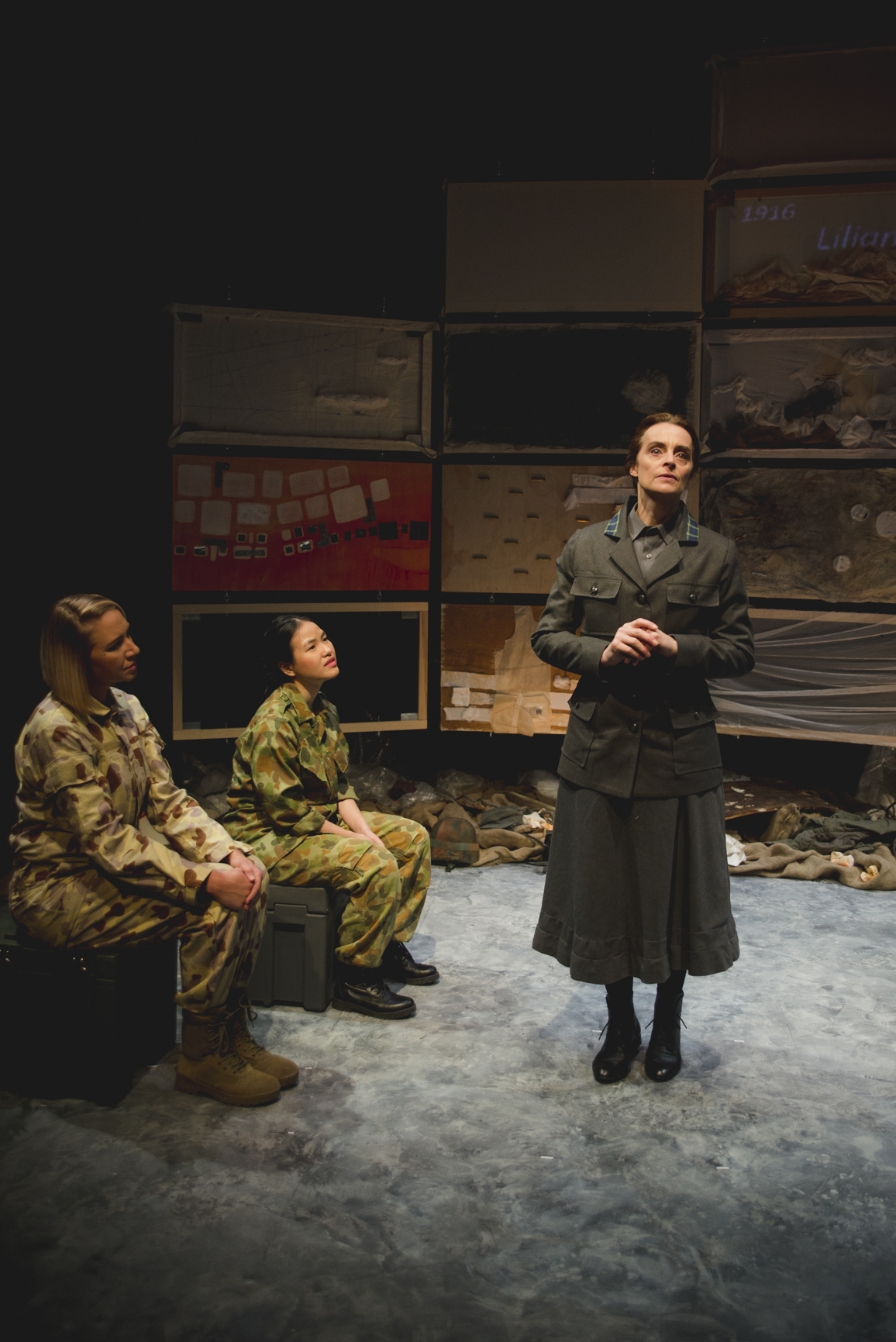 Many of these stories’ territories treads close to home. Even to your front door. Radiologist Mary’s WWII story tugged at my heartstrings. Played with pathos and conviction by confident Carolyn Bock, her war career matched my grandfather’s. I’d grown up with tales of Tobruk, bombs, ship convoys, muck day cricket games, and saluting French Officers. Of the encroaching Japanese invasion down through Singapore and New Guinea, and the harsh terrain of the Kokoda track, where few made it out to tell the tale of 90 kgs backpacks, steep muddy inclines and torrential tropical downpour. She served across the Middle East, often supporting her Aussie troops, and represented Britain when the Australian Armed forces would not let her practice as a doctor in their service. None of these women’s tales and knockbacks make them self-pitying. They have too much work for that and the tone of the play is not bitter about lack. It’s exultant about legacy.

Chi Nguyen as young Vietnamese doctor Tam presents her searing story. Sections of speech are delivered in song like beautiful Vietnamese accent, tonally melodic, bringing emotion, and charts her journey as a young child aboard a refugee boat escaping war in Vietnam to Australia. Years later, she returns to the field of war as a new graduate, Australian-trained, answerable to a village led by senior males uncomfortable welcoming women as doctors or the ones in charge. A moving journey to acceptance and trust is her working experience.  Surgeon Catherine, boldly presented by Jean Goodwin, toughs it out with the men, in an era of the ‘equality’ of modern times yet reveals the painful price mothers at war bear, unable to take calls in queue, alongside her mates, from her children because it’s just too real. The stories vary in their central passions and concerns; no two women are the same and all wish to serve for different motivations and deserve the latitude to do so, just like their male counterparts. 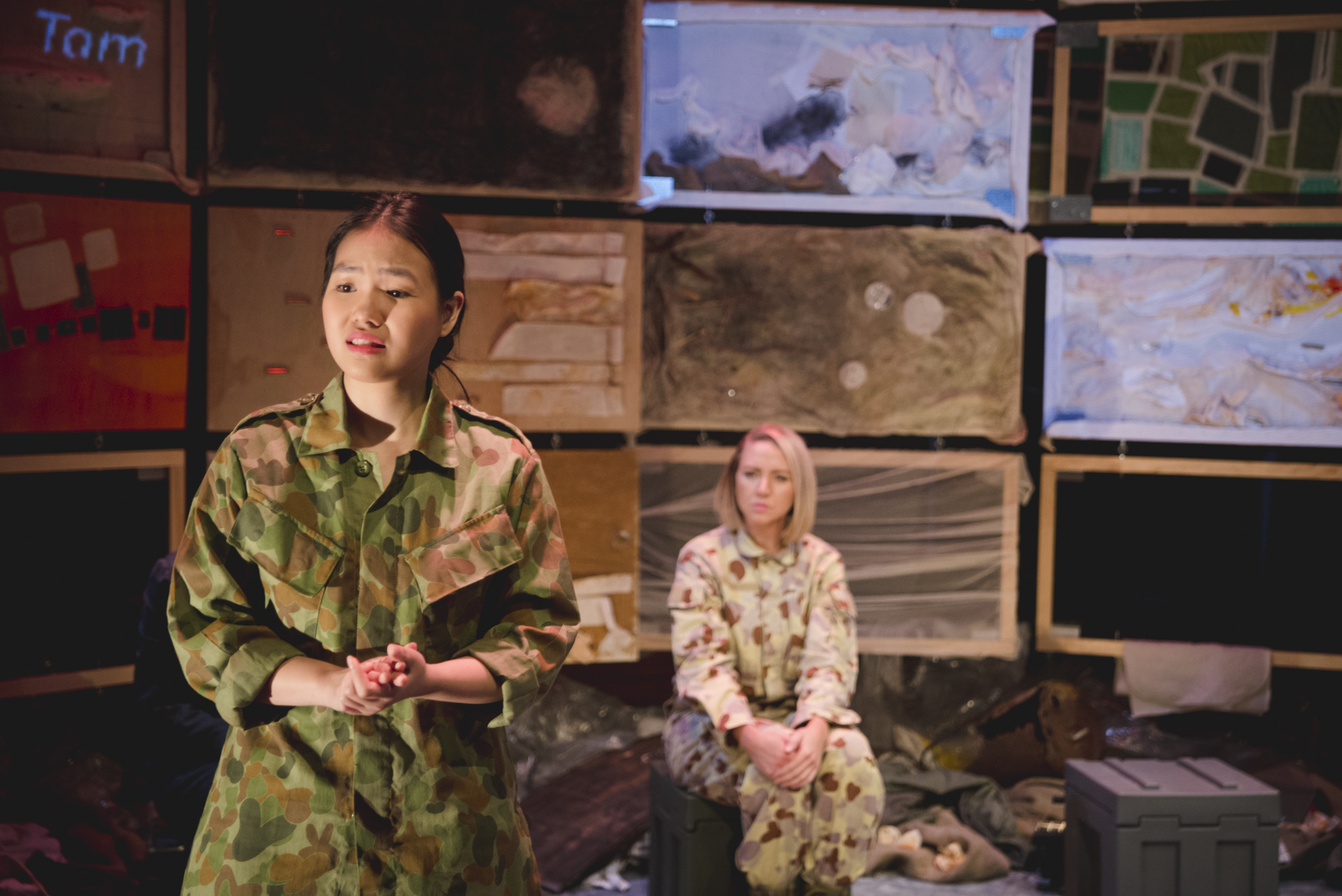 Chi Nguyen as Tam from Vietnam

Nothing stopped these women. Their invincible determination to not take no for an answer, to act in equality, to live their willed destiny to go out and heal, is the flame that lies at the heart of this stunning research project and moving piece of theatre. There are lots of laughs and it doesn’t preach. The execution and delivery of the work is superlative, elocution, diction, sensitivity, and serious emotion some of the best in Melbourne.  This is a piece of writing so well worked it allows the actors to design and create via character with each other, before our eyes. You will walk away having met some homegrown heroines you never know before. You will marvel at all they sacrificed and of the rich tapestry their personal war experiences wove back into our national identity once returned.

If a devoted nationalist, you must see Hallowed Ground to know the story of the other half, the women who stepped up and answered the call to defend and protect human lives despite home objection. The role of the military in excluding them? This play, like its subjects, defies the decades of denial and showcases women doctors flagrantly excelling in various theatres of war any way they could. By virtue of their suppression, their effort is all the more commendable. Each well-crafted and true depiction here is a commemoration of these women’s lives and a homage to their achievements. A red poppy on their lapels, for the girls. This is top class performance based on thrilling fact. Not to be missed.

Affected by fire this May,  support the recovering La Mama Theatre, Melbourne’s home of original Australian writing. Their Courthouse Theatre venue has been retrofitted for full accessibility.

is the Theatre Specialist for The Plus Ones, Melbourne.  A performing arts and literature graduate of VCA, UOM and Deakin,  she has a flair for bold, non-traditional performance platforms, and is an active contributor for The Melbourne Shakespeare Society. As Arts Maker dancemindwork, on the street, or in the box seat, she is always looking for quality works that push the envelope.