Book yourself a seat at clever Dean Bryant’s opulent period version of Oscar Wilde’s satirical expose of corruption and hidden secrets, An Ideal Husband. It’s so good to see late Victorian mores live on 21st century stages, finding that hypocrisy from those higher in the social order is still very much a present era malaise. Choc full of laughs, posturing and role play, as well as stunning rich costuming, the cast ham it up via Wilde’s brilliant witticisms and social observations making this an entertaining, fun night out.

Written by Irishman Wilde in 1893 and first performed in 1895 , he was at the height of his social favour and success as a playwright. His extroverted assertions spoke out loud the gossipy inner thoughts on the wealthy and well connected with a fabulous flair for one-liners and heavy punch lines. This work, though set in the domestic private world of Sir Robert Chiltern, his wife, and their associates, is about public face, political corruption and reputational damage as well as the roles played by husbands and wives in marriage and offers Wilde ample opportunity to give us big laughs. The war between the sexes was never so funny.

Bryant’s direction is elegantly light,  with his placement on stage and choreography of movement making the most of the humorously flawed action of these well to do characters with their spiraling anxieties. The stage is glittering, with golden yellow satin cascading as backdrop to these drawing room settings, through which unobtrusive servants voicelessly intersect. His presentation on stage, and via characterization and script, reveal the neurotic and vain selves existing behind their formal facades, the false selves the protagonists strive to keep public pure. 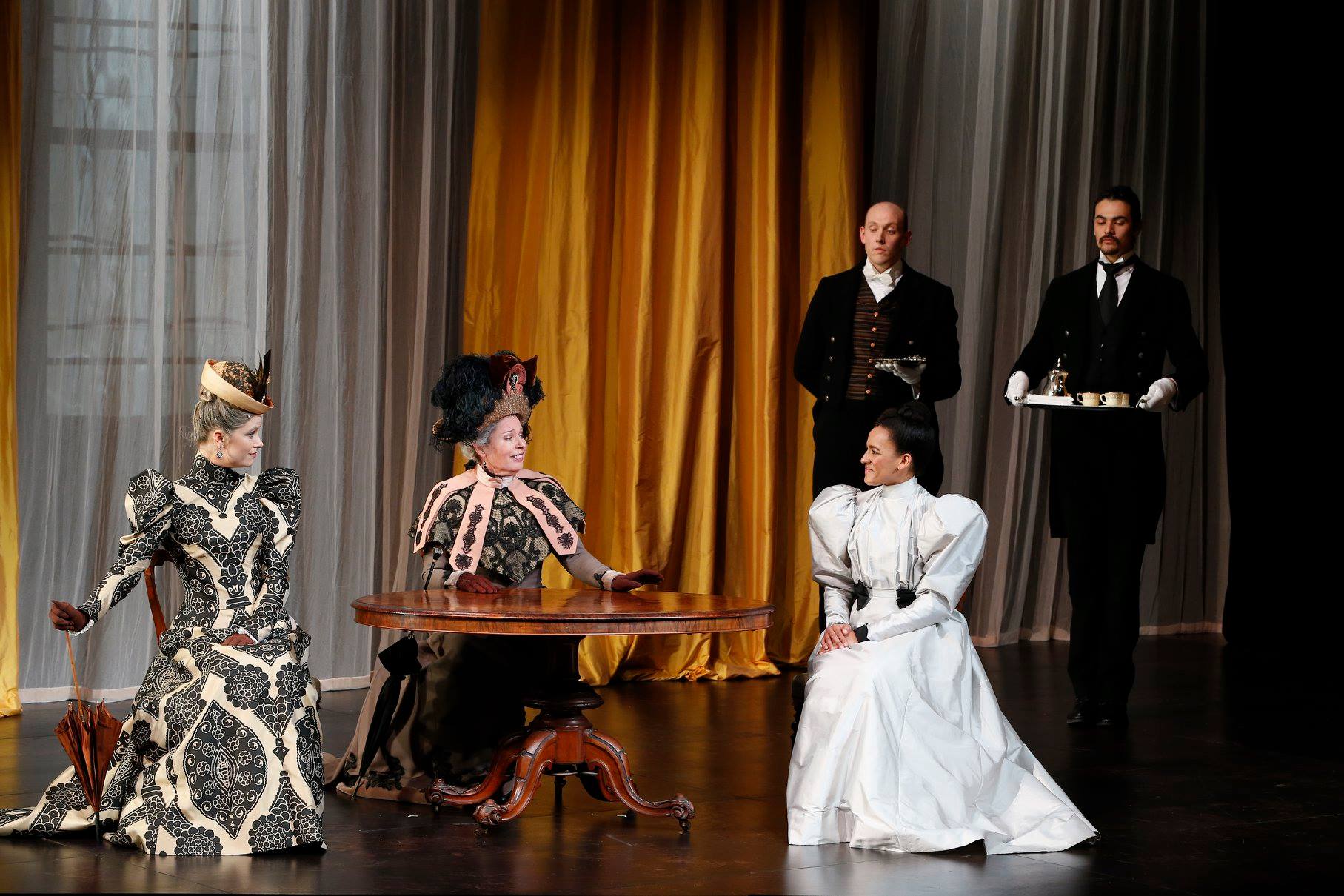 Tea at the home of Sir Robert and Lady Chiltern

The sets and costumes are lush, redolent of Victorian opulence and sumptuous. You will not regret buying a ticket if all you do for this outing is stare in wonder at Dale Ferguson’s brightly coloured historical costumes while the cast parade across the expansive Playhouse stage. A staff of 20 assistants supported him in his long and deep research taking as template for design the late 19th century paintings of American artist John Singer Sargent. The confected realities of the very rich and powerful are here presented as show. Lush, excessive, and dazzling as it is, it compels questions of what this pageantry disguises.

Simon Gleeson puts his whole heart into playing Sir Robert Chiltern as the fallen good guy who really wants to be pure. His mannerisms are detailed and fitting, truly Victorian, reflecting a middle-aged man of position who flatters himself to be morally without stain. Throughout, Gleeson maintains an inner integrity which Chiltern has returned and he sets a different character colour and tone to the two women closest to his heart.  Mrs Chiltern holds the high moral ground and is played with pathos and depth by Zindzi Okyendo. Her costumes are stunning and amplify the moral high-ground she dominates in the story. She is the staunch purist idolised by her husband requiring he maintain a persona as an upstanding, honest and proper man. These two main characters are satirised as mid-career wannabes of their age. It’s no accident Sir Chiltern’s next step is into Cabinet. 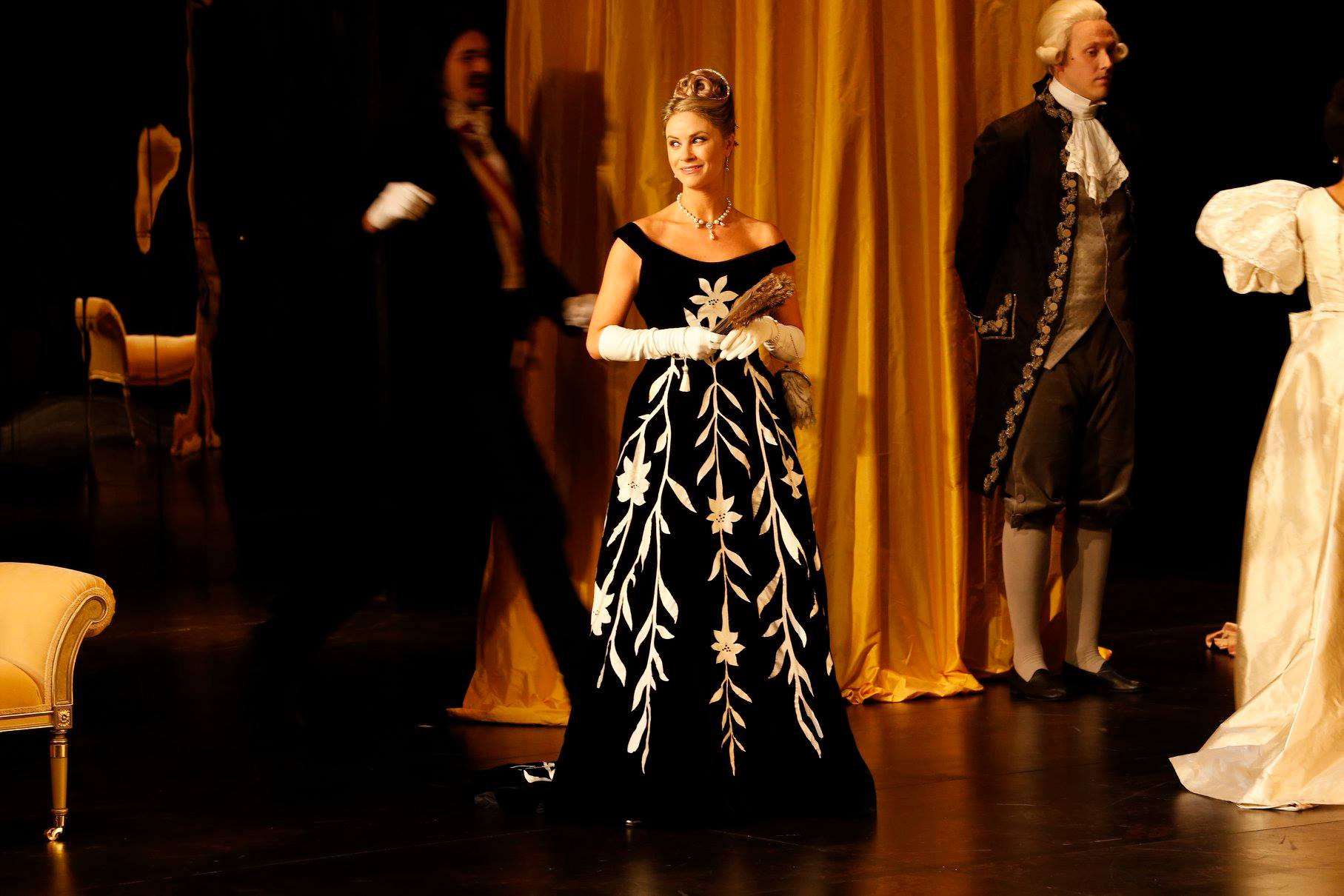 Christie Whelan Browne is perfectly cast as the pretty, confident and conniving casual criminal Mrs Cheveley, convincing as the women who blackmails Sir Chiltern with evidence from his youth revealing misconduct, avarice and ambition. Statuesque and beautiful, where ever Whelan Browne moves on stage, we are compelled to watch. She is perfectly attired and her costumes are artworks to look at and she maintains a cool presence as a beauty who undermines.  Lord Goring almost steals the show. He is the one character who speaks honestly, getting to the heart of the matter, and becomes the confessional for each character as they undergo their compromises and tribulations. He resolves all the complex relationships at risk of undoing. Played animatedly and with verve by Brent Hill, this character becomes the linch pin through which resolution eventuates.

Two accomplished stage and television actors stand out. Gina Riley as Lady Markby performs ironic lines and, thanks to her past work in comedy, her diction, expert timing and po-faced delivery mean we get great laughs in her scenes. Grumpy old ladies always get the good lines in Wilde’s works. William McInnes, standing stately tall as the Earl of Caversham, has a rich, throaty voice and uses his physicality to play the arrogant buffoon of a father well. All the cast are voice coached, with tone, delivery and accent so critical to class perception in its time. Bryant allows these Australian actors perform voice as ironic tool with articulation and modulation in the style such an effort, in itself the exercise of public conversation is an effect of artifice.  Other cast Jem Lai, Josh Price and Michelle Lim Davidson play Victorian accent and presence much to the audience’s amusement. 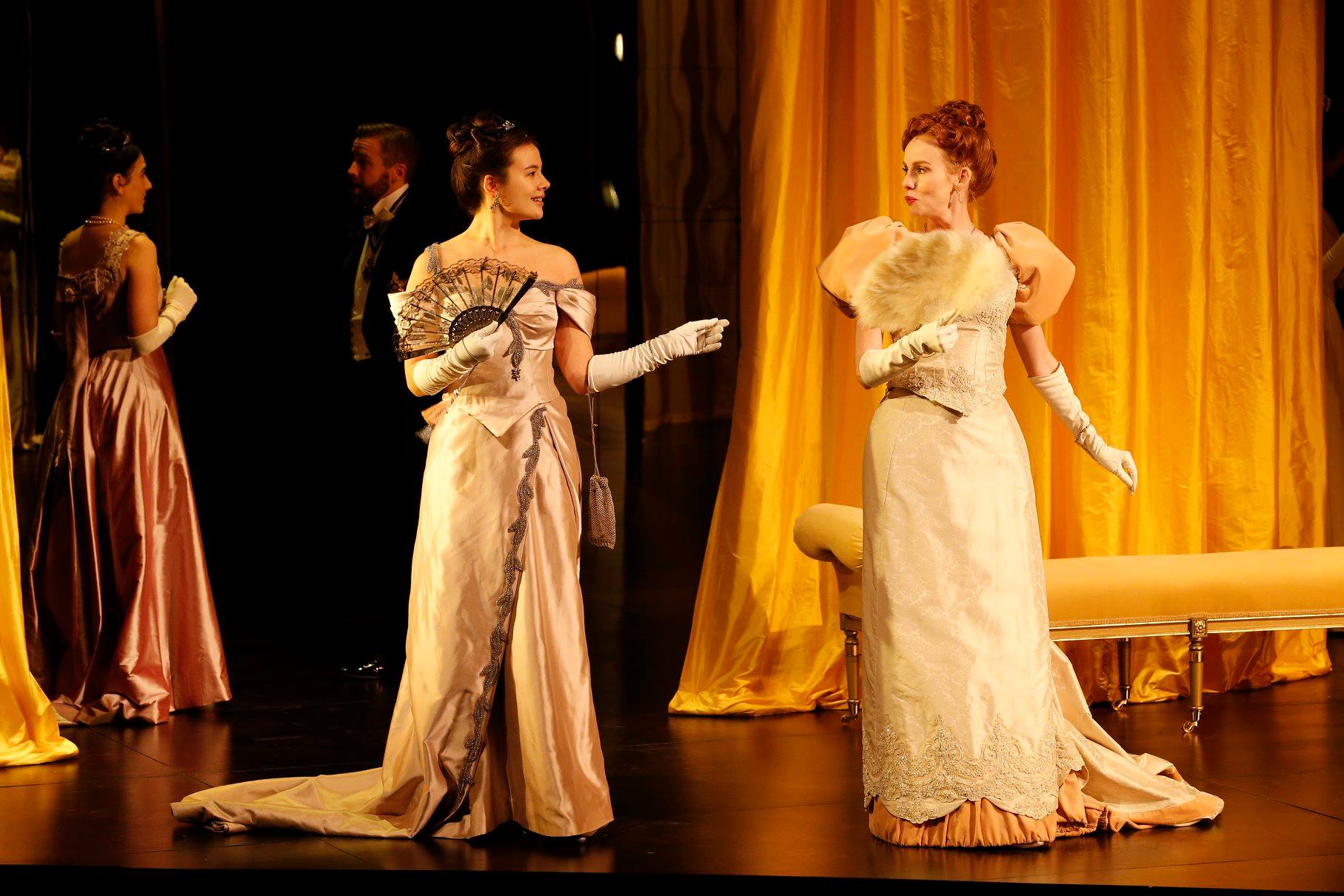 And then there are Wilde’s inimitable lines which sound as prescient as ever.  It’s what audiences then as now go to hear spoken – to love oneself is the beginning of a lifelong love affair; sooner or later, we all have to pay for what we do; and no one should be entirely judged by one’s past just some that appear magically amidst the drama. It’s worth waiting for these, making it such a delight MTC devote part of their program to Wilde’s work in our present.

Go see this play to revel in the fabulous writing and character that is Oscar Wilde. An early modernist and critical thinking anti-establishment figure whose witty barbs and behavioural observations public airing prefigured modern day forums such as Facebook and Twitter over a hundred years before their incarnation. Wilde wrote as outsider by virtue of his nationality (Irish), his nature (homosexual), and his profession (artist/writer), commenting from the inside and edges of this society. Attending this play is ironic when we know he was to be soon made victim by this society’s viciously hypocritical standards. Hearing lines about character, honesty, truth, integrity, power, and maintenance of public face stir painful thoughts when we know what occurred in his own life the year of its first performance – his subsequent prosecution for gross indecency by the father of his beloved Bosie, the Marquess of Queensberry, which saw him sentenced to two years hard labour in prison, provoking an early end to his life after release.

This version showcases layers. The layers of the show-off Victorian home, with rich furniture, drapery, rooms and servants. The layers in dress and language with affectation and posturing its core vernacular. The layers required in self-understanding, personal relations, social connections, and official roles. This is a polished and heartfelt tribute Wilde and in the mirthful spirit of its script.