Ribaldry, humour, serious focus, contemporary sets and costumes with an Aussie twist, clever theatricality, all the things we love Bell Shakespeare for, are all entwined to bring us Shakespeare’s blockbuster chronicle of  demise by power in their newest outing, Julius Caesar. Anna Tregloan’s rough hewn, post-apocalyptic set and Director James Evan’s mimetic presentation make this a unique trip through the lines and pages of how power corrupts absolutely with a side serve of a Judas-like betrayal of a beloved leader by his 2IC. On a world stage where the battle for dominance is daily played out, there could not be a better time for a gritty version of this story to be revived. 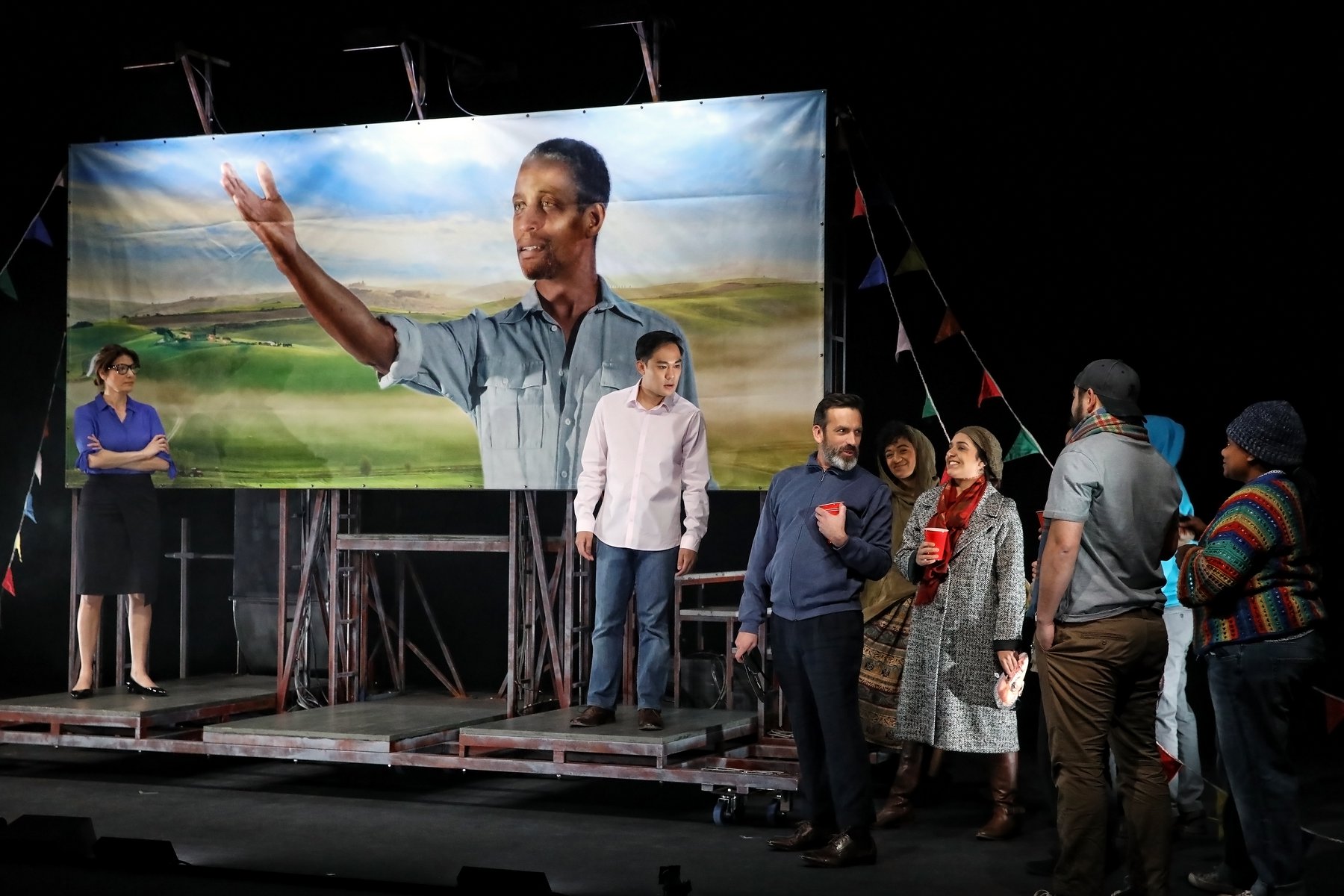 The people of the streets celebrate Caesar’s triumph.

Crowds can never get enough of this play which tells of a famed leader undone by murderous mutiny, comparing it to political manoeuvring the world over, across all ages, and in this one, we see early a giant billboard as backdrop with triumphant Caesar’s angelic visage dominating a view of paradise, persuading the masses as if a Messiah, though the people in the grimy streets of Rome know him to be an usurping warlord. Resembling a political ad, it’s a blatant Make Rome Great Again call to unity which gets everyone chuckling, setting the mood instantly.  There is a lot more to this presentation than cheap media rip offs and easy grabs for laughs such as pastiche offers.

It’s also an elegant historical nod to the how of theatre, and about performance as ritualistic role playing. It honours the traditions of the enacted performance, where there is movement, show and playing roles executed before our eyes, like medieval or mystery plays performed in the street, or the pageantry of parade, whether military, civic or royal. All plead for the engagement of the people.  Here, it mimics the literal and metaphorical walking of the streets those in power tread to plead for our favour.  The Brechtian, open setting of the Fairfax Theatre is perfect for this rendition being a open air forum much like the amphitheatres of classical Greece and Rome. 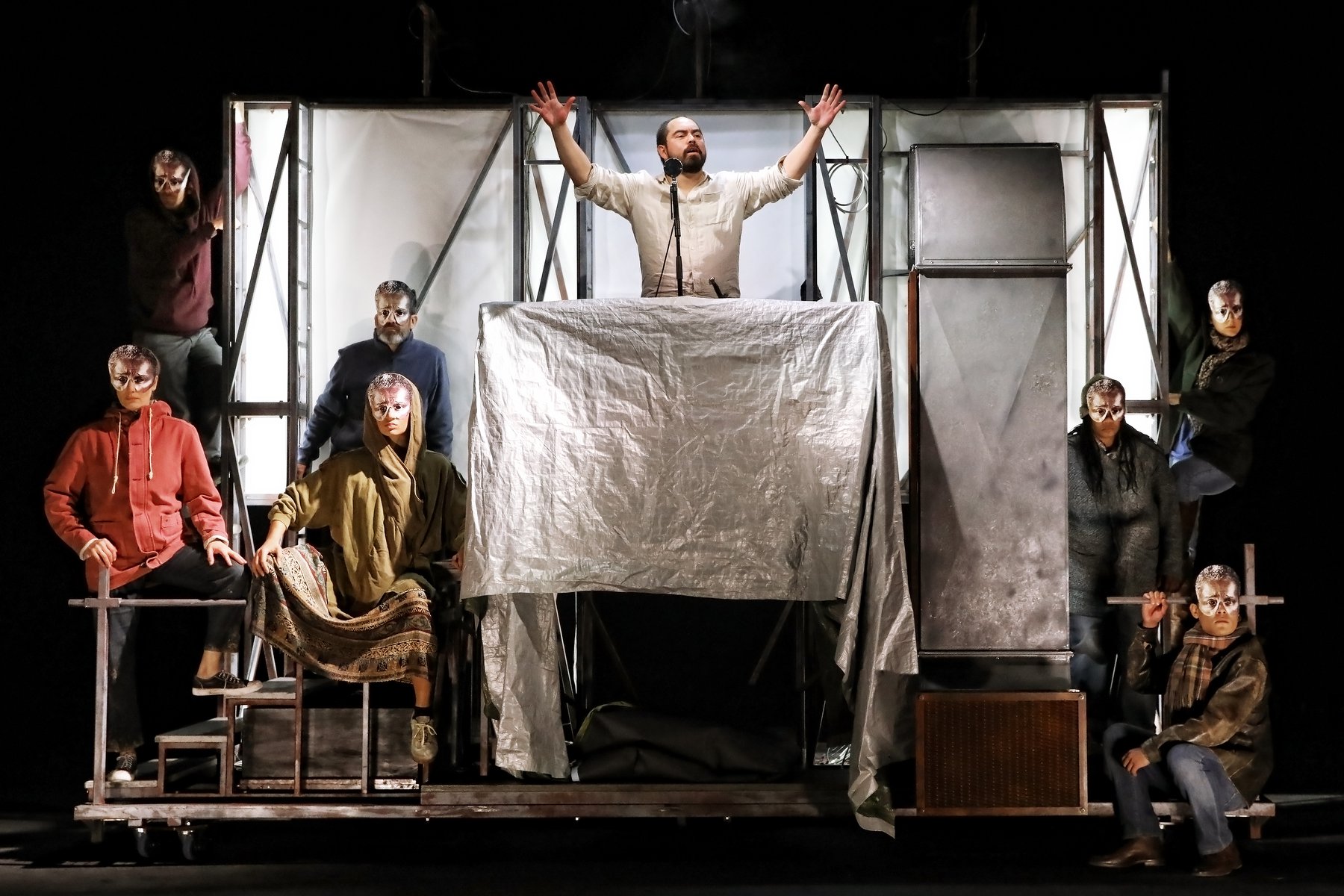 Moments like this clever, funny billboard image are  what we love Bell for. Sometimes replacing high art with populism, the company is wildly bold and prepared to play with text and plot, and bring an insouciant energy to script revival. Revering the work and its tradition, and deeply honed in Shakespearean practice, they possess the luxury to play with context, situation, and contemporary placement, just as did The King’s Men all those years ago juggling crowds at The Globe and aristocrats at court. Bell applies those 400+ year old words to today’s oligarchal landscape, and our own lives, and the result is a thrilling win-win.

This is true Shakespearean theatre. Alive and relevant to its age, speaking directly to the humours and irritations of his audience, Stratford’s country lad wrote to have people pay to attend, time and again. Although honey-tongued and a possessing a lyrical way with words when he chose, Will was a Globe shareholder and in the business of entertaining. This play, early as he is ascendant as London’s newest popular writer, does this in spades and was a successful product. He sets it in the seat of world power of its age, Rome, capital of the Empire, and after war. Military men and men of government are the featured roles, with the vulgare ( common population) mere bargaining chips for the power plays of those behind closed doors. The story is a chilling view into corruption, the hunger for power, ambitious greed, and the tyranny of fear-mongering which can end careers and take lives, and has references to the spectre of ‘the threat of terrorism’ from our own age. A scene where the cast spell out a word in Caesar’s blood on a backdrop show the confused motivations of ordinary people when ambition gets its claws into us, as well as those of ideology. This play has layers and layers of ironic truth and builds to a bloody and compelling crescendo before interval and Evans direction with Tregloan’s set honour these elements in the play in their rendition. 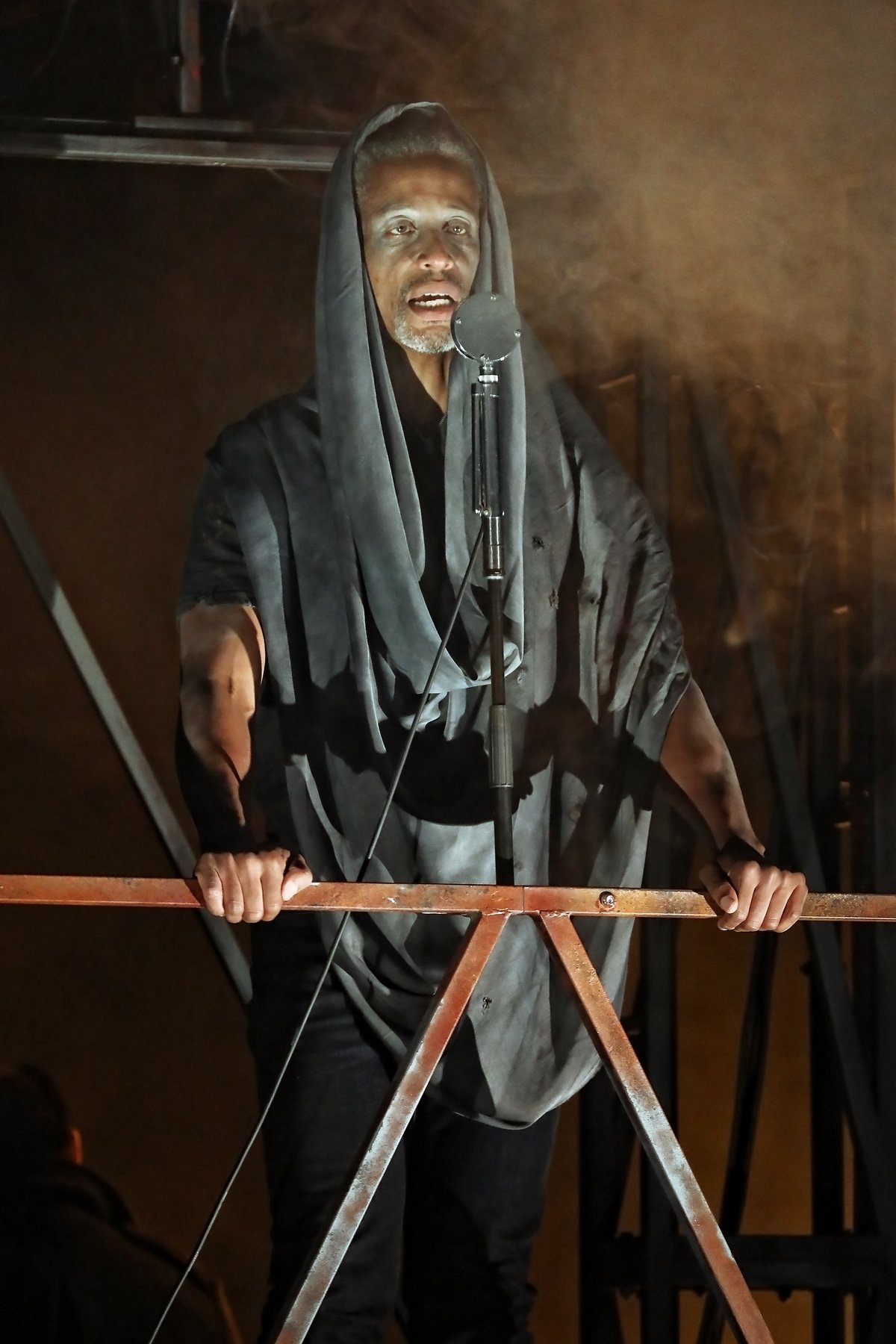 The ghost of Julius Caesar, played by Kenneth Ransom, returns to plague Brutus.

The story feels biblical and touches upon the dark and light forces within us. You’ll hear some very famous lines –The fault, dear Brutus, is not in our stars but in ourselves; Cry havoc, and let slip the dogs of war; the most unkindest cut of all; and the betrayed pathos of Et Tu, Brutus? There are goodies, baddies, dark nocturnal assignations, pre-dawn scheming, and trust and mistrust between friends and loved ones. You have to go to see the intricate plotlines fall like dominoes. Nate Edmondson sound composition is the extra player in this version, enveloping scenes as music does on film, amping up the obvious drama whilst giving other plot information, making theatre resemble cinema for the Netflix generation. This version is edgy, industrially distressed, and a metaphor for the state of the world today.

Evan’s direction is physical and choreographic. The cast walk about the revolving set in voiceless clusters, often masked, holding positions off-centre as would a Greek chorus, mimetically supporting or contradicting the main narrative. It’s so great to see this approach returned to the Australian stage and to Shakespeare. His work is not all about words, a mistake many companies make. Evans here transport’s Elizabethan theatre back to it’s Grecian, and primitive, roots. We see non-textual drama tell us about mood, emotion, fate, and bestial betrayal. The whole presentation has a feel of dark portent and inevitable undoing, and of ritualism, deep in theatre’s classical roots. 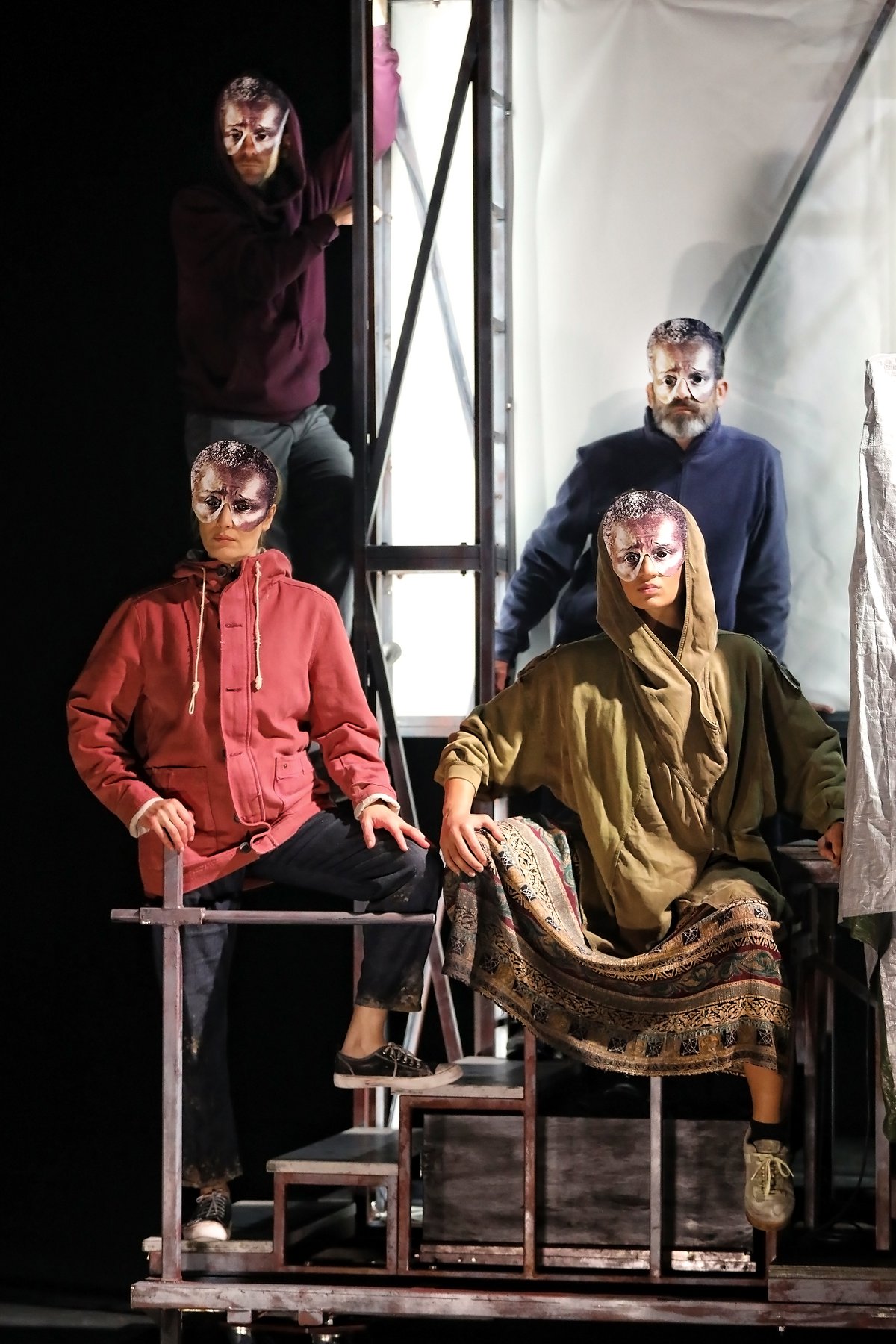 The cast as Chorus, the people of Rome.

Kenneth Ransom’s muscular Caesar is beautiful as leader. He parades before us, exhorting the audience as the man might his Roman people. He moves animatedly, breathing through his lines and Caesars’ scenes, with a musical voice which trickles through his balletic physicality like sand slipping downward through a timepiece…to his tragic demise. Ivan Donato as Brutus has a deep Shakespearean range to his voice and plays the betrayer well. His voice dark and timorous, echoes the shadowy inner machinations he falls prey to. He shows writ on his body the anxieties his scheming unfurls as he comes undone.

The true hero of the work, Marc Antony, is compellingly delivered by Sara Zwangobani, in her high heels and modern dress looking every inch a model citizen. She delivers her lines as a person of state and great significance, it’s just that she shows the Emperor has no clothes. As the cast of senators listen censoriously out of sight, we fear her neck may next be on the chopping block in a sphere of  entrapment, scurrilous rumour mongering and lies at the service of personal ambition and alliances. 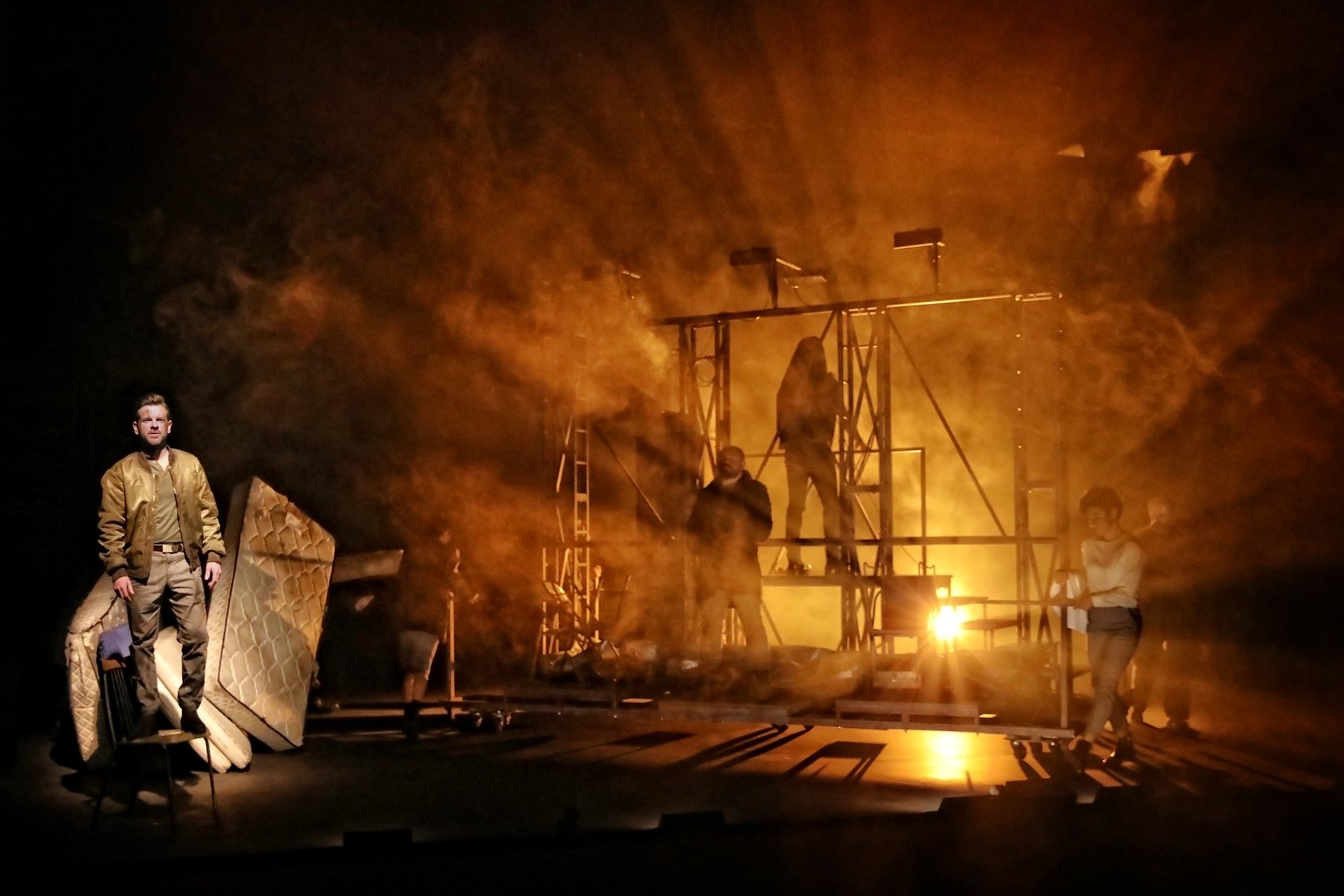 Nick Simpson- Deeks as Cassius, roaming the streets after his loss of power

Ghenoa Gela has good stage presence, and Nick Simpson-Deeks, a good speaker, as this play’s evil whisperer, Cassius, looks the true 16th century courtier but seems out of place in this Mad Max-like setting. Neveen Hanna is strong in her roles, conveying character through purity of traditional performance, with mask-like face and slow gestures, coupled with an harmonious voice.  The cast do what we expect of any company branding itself Shakespearean– their performances show their attention to the text and narrative, and the hard work and expert training the company hones with aid from specialist voice coaches and a movement and fight director.

This version is very much one of mood. It circles and envelopes you from the stage like a dangerously noxious vapor. There is no little black box this parade is made in, it’s in an open space with collapsed wings and sides for entrances and exits. Like the people whom Caesar and Brutus exhort, we, too, are caught up watching the terrible things which unfold before us in the public theatre of social media, media conglomerates, and in our own tragic/comic theatres of state and national representation. This play is a bone-chilling step into the poisonous heart of this traditional tale and it’s still present connection to the reality of our 21st century lives.

Sarah Wallace is a Theatre Specialist with a flair for the bold, and non-traditional performance. On the street, or in the box seat, she looks for quality works that push the envelope.